This is the shocking moment a male bus passenger kicks a teenage girl in the face after ‘racially abusing her’ for not wearing a mask – before a man in a suit intervenes and stamps on him in retaliation.

Footage shows a middle-aged couple and the 16-year-old having a furious row over her not wearing a covering on packed public transport.

But their argument escalates into a fight and the man brutally kicks the teen in the head on the number 79 in Moxley, West Midlands.

Another passenger is forced to intervene, tackling the man and stamping on his head in retaliation.

It is not clear who filmed the clip, but it appears to be a fellow passenger, and has been widely viewed by shocked social media users.

The footage starts as the couple starts a blazing row with the girl for not wearing a mask amid the coronavirus pandemic.

The man yells at her: ‘All I’m saying is put your mask on! I’m not being racist but the virus is more common in black and Asians. Put your f**king mask on.’

The teenage girl replies but is shouted down by the woman who says: ‘Why do I have to come on the bus and put up with you sitting next to us with no mask on?’

The three passengers continue arguing with each other and the man says the girl is more likely to kill people by not putting a mask on.

The woman also shouts: ‘You can’t be spreading something if you got it and spreading it around people!’

Other young passengers dare the woman to fight her while others plead with them to calm down.

Some demand the couple get off the bus and as they do the man turns back and kicks the teenager in the face. 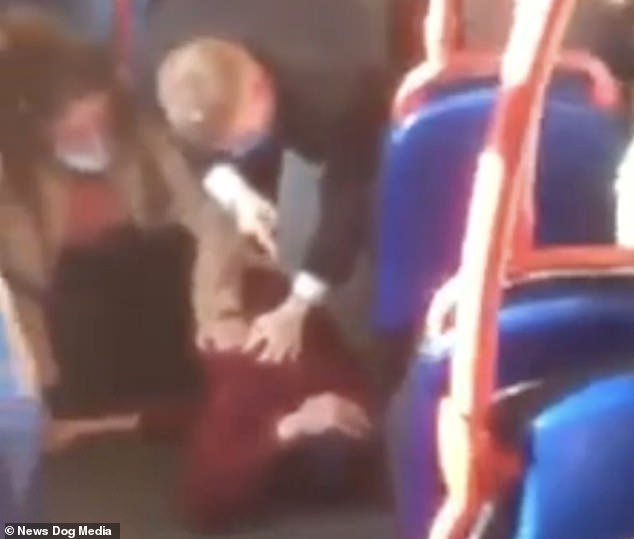 Another passenger is forced to intervene, tackling the man and stamping on his head in retaliation

A male passenger jumps up and grabs the man and flings him backward down the bus. He says: ‘What are you doing you piece of sh*t? I will f**king murder you.’

He then stamps on the man’s head before shoving the couple off the bus during the October 1 incident.

A West Midlands Police spokesman said: ‘We’re investigating after a teenager was racially abused and attacked on a bus in Hill Top, West Bromwich.

‘An argument broke out on the 79 bus in Moxley at around 5.40pm on 1 October, before a fellow passenger racially abused the 16-year-old and kicked her.

‘He was then thrown to the ground by another passenger, who then stamped on his head.

‘We have spoken to the girl, and are examining mobile phone footage which has been shared on social media.’

They added: ‘We take racially aggravated crimes extremely seriously, and our enquiries continue.’