Birmingham could be the next city put back into lockdown after infection rates doubled in a week, local leaders have warned.

West Midlands mayor Andy Street said even tougher restrictions were ‘looking likely’ now Birmingham’s case rate had jumped to 69 per 100,000, up from 30 a week ago.

It comes after 712 people caught the virus in the seven days up to Saturday.

The Government announced today all gatherings in England will be reduced from 30 people to six because of a worrying increase in infections right across the country.

But Mr Street said people in Birmingham could be hit with even tougher rules seen in the likes of Leicester and swathes of Manchester, Lancashire and Yorkshire.

These places have banned households from mixing in private homes or gardens and people are only allowed to dine out with people they already live with. 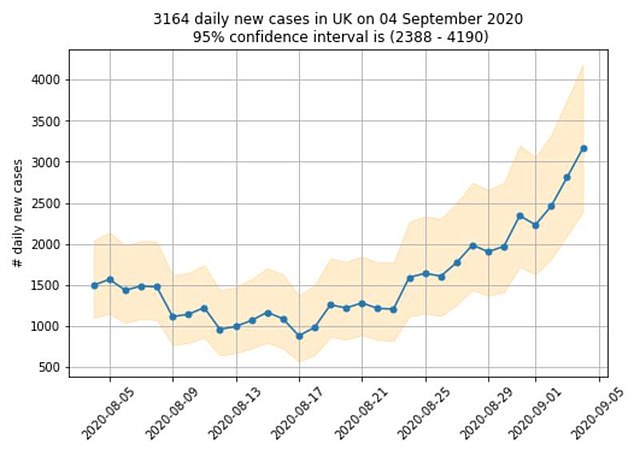 Scientists running the Covid Symptom Tracker mobile app have warned they are noticing a significant rise in cases across the UK. They say there has been 3,164 daily new cases of the disease on average over the two weeks up to September 4

Local leaders in Birmingham are meeting with national health chiefs today to thrash out a plan to curb the escalating crisis.

Mr Street told Birmingham Live: ‘Thus far, it (the virus) has concentrated in the younger age groups, that’s why we’re not saying that much increase in hospitalisations and deaths.

‘But if we don’t stop this it will translate into these elder age groups and we will have a very serious situation on our hands.’

He added the ‘simplest form of restriction would be city-wide’, adding that given the size of the current infection rate numbers further restrictions were now ‘very, very likely’.

The alarm was raised in Birmingham at the weekend as the city’s infection rate soared past the 50 mark, considered a good indicator of imminent restrictions.

Birmingham public health director Dr Justin Varney said: ‘This is not a false alarm – we are on the precipice and if we are not careful we will be back where we were in April and May and lives will be lost.’

Meanwhile, scientists running the Covid Symptom Tracker mobile app have warned they are noticing a significant rise in cases across the UK.

Nearly four million of people have been using King’s College London’s app and self-reporting symptoms, which has helped scientists monitor the virus’s trajectory.

They say there has been 3,164 daily new cases of the disease on average over the two weeks up to September 4.

This is the highest number of cases the app has recorded since late June and the numbers have been climbing for the last few days.

The latest figures were based on the data from 8,456 swab tests done between 22 August to 4 September.

KCL now estimate that 30,948 people currently have symptomatic COVID in the UK.