Microsoft co-founder Bill Gates has said it will likely take 18 months to develop a coronavirus vaccine – and that getting it ‘shouldn’t be limited by money’.

The 64-year-old business magnate claimed that – due to a lack of global preparation for the pandemic – it would take some time to create a working treatment.

And he warned that even with an 18-month timescale, corners would have to be cut as there will be ‘less safety testing than we typically would have’.

Vaccines typically take around five or six years to complete, he said. Due to the ongoing global spread however, the process will have to be fast-tracked.

He vowed money would be no obstacle to the vaccine and revealed he was happy to keep on donating, saying ‘we’ll write cheques faster than governments can.’ 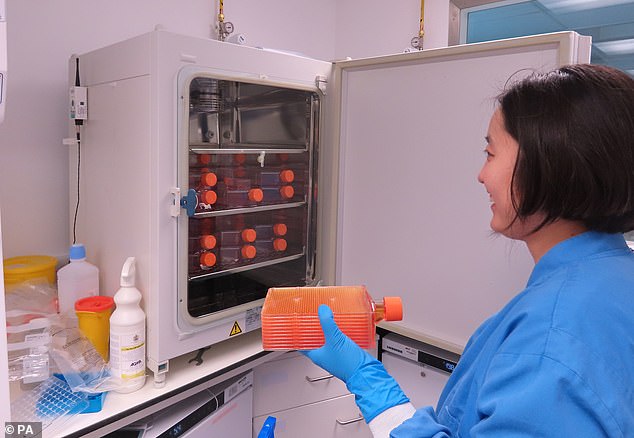 He told BBC Breakfast today: ‘People like myself are saying 18 months [for a vaccine]. If everything went perfectly we could do slightly better than that.

‘But there will be a trade-off. We’ll have less safety testing than we typically would have. Governments will have to decide.’

He added: ‘We’re doing everything we can. We’ll write cheques faster than governments can. It definitely shouldn’t be money limited. It should be all the best constructs full speed ahead.’

Asked how a global vaccine might be found, he said: ‘Research will need to fund the ten most promising constructs. Because we won’t know in advance which one will prove to be safe and effective.

‘It has to be effective for older people whose immune system is weak is a huge challenge. If you really amp up the vaccine to do that then you can run in to safety issues.

‘So we’re going to have to take something that usually takes five or six years and get it done in 18 months.’ 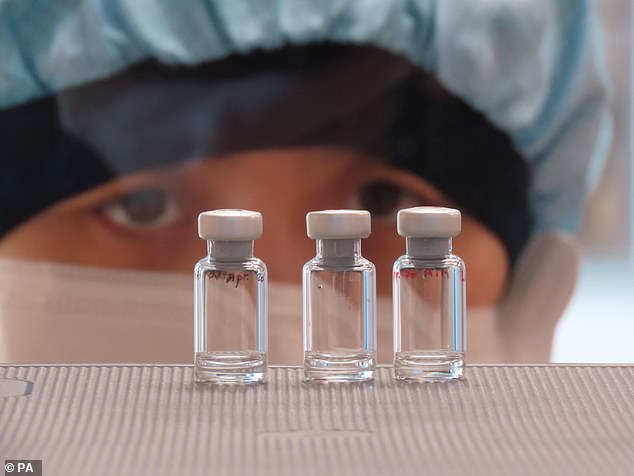 According to the researchers, UK volunteers could be given the first dose of a potential vaccine within the next week (pictured one of the researchers at the University of Oxford)

Mr Gates warned that the process of getting a vaccine could have been quicker. He warned of a global pandemic similar to coronavirus in 2015.

Asked whether he thought he had been listened to, he said: ‘No. Investments could have been done so that diagnostics would have essentially been immediately available.

‘Now we’re scrambling and it’s taking us much longer to get these pieces together. Even though scientists are doing heroic work.’

But he had hope for the future, adding: ‘We weren’t ready for this pandemic but I do think we will be ready for the next one using the new tools of science that’s very doable.’

His comments are in contrast to an Oxford University professor who today said a coronavirus vaccine could be ready by autumn.

Sir John Bell said trials could be finished by mid-August but warned the real challenge would be manufacturing ‘many billions of doses’.

He also revealed the prestigious institution started human trials with a candidate vaccine this week.

There have been conflicting reports over when a vaccine will be ready, with No 10’s chief scientific adviser Sir Patrick Vallance saying one was not around the corner.

But he said the industry has ‘stepped up’ to the challenge as the crisis in Britain appears to slow, despite another 847 new deaths announced yesterday.

The government yesterday launched a task force to support scientists in their attempts to find a life-saving jab.

In 2015, Mr Gates predicted a global pandemic would kill many people and grind the world economy to a halt in a 2015 TED Talk.

He said that if the wealthiest nations had prepared for a pandemic with the same urgency that they prepared for nuclear war, this could have been avoided. 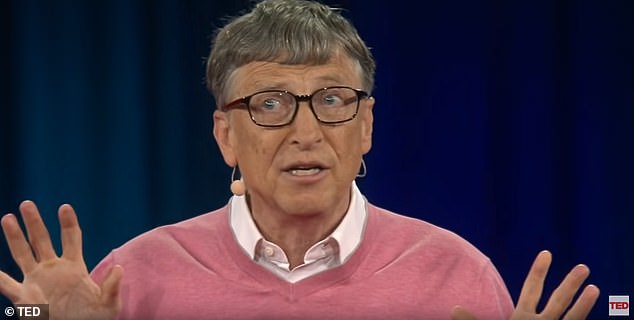 ‘If anything kills over 10 million people in the next few decades, it’s most likely to be a highly infectious virus rather than a war,’ Gates said at the time.

‘Not missiles, but microbes.’

Gates said that the prospect of a global pandemic was overlooked by governments, even after recent outbreaks of the Ebola virus.

Gates said that the world was lucky that the Ebola outbreak was limited to West Africa.

Ebola, unlike coronavirus, renders those carrying it as too ill and weak to walk around and infect others.

Gates also chalked it up to sheer luck that Ebola didn’t spread into urban areas.

‘Next time, we might not be so lucky,’ the multi-billionaire philanthropist said. 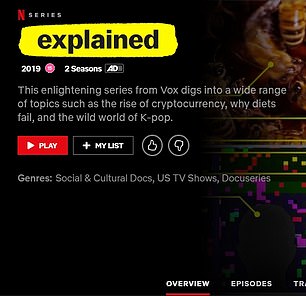 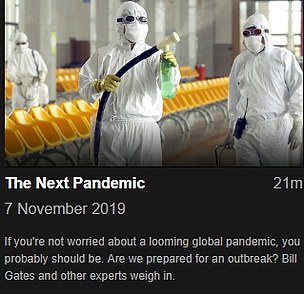 He noted that while countries run drills known as ‘war games’ to prepare for future military conflict, it should also run simulations known as ‘germ games’ to be better prepared for widespread illness.

Gates warned: ‘We’ve invested a huge amount in nuclear deterrents, but we’ve invested very little in a system to stop epidemics. We are not ready for the next epidemic.’

In his lecture, Gates called for beefing up health systems in poor countries and embedding medical staff with the military in order to enable more rapid deployment of teams to deal with pandemics.

Last year, Gates, who since stepping down as CEO of Microsoft has devoted his energies to helping eradicate disease in the developing world, also warned of a coming pandemic.

In a 2019 Netflix documentary, Gates predicted a killer virus could originate in China’s wet markets to rapidly infect the world

In what now appears to be an eerie premonition of future events, the Microsoft tycoon warned in an episode of the Netflix ‘Explained’ series that the world was ill-prepared to deal with a global pandemic.

In the series aired late last year Gates had warned of the likelihood of a virus breaking out in one of China’s wet markets – exactly like the one in Wuhan where this new outbreak of coronavirus is believed to have originated.

In the episode titled The Next Pandemic the documentary producers go to a wet market in Lianghua, China, where animals are killed and the resulting meat sold in the same place.

This, the documentary explained, makes the wet markets a ‘disease X factory’ as the different animal corpses are stacked on top of each other, blood and meat mixing, before being passed from human to human.

‘All the while, their viruses are mixing and mutating, increasing the odds that one finds its way to humans,’ the documentary goes on to explain.

In the episode, Gates also warned the world was ill-prepared to deal with the implications of the viral spread of disease when cures were often years away.

He said if nothing was done to better prepare for pandemics the time would come when the world would look back and wish it had invested more into potential vaccines.

‘If you think of anything that could come along that would kill millions of people, a pandemic is our greatest risk,’ he said.