A new weight-loss drug made by Eli Lilly is set to become the best selling medicine of all time, analysts predict.

Tirzepatide — sold under the brand name Mounjaro — is expected to be approved by the Food and Drug Administration (FDA) for weight loss within months.

Analysts expect the drug — which is believed to be better than similar rival medications — to make anywhere from $25 to $48billion in the US every year.

That’s more than the current record holder, Pfizer’s Covid jab, which raked in $36.8billion in 2021 and more than double the $20.7 billion set by AbbVie’s rheumatoid arthritis drug Humira in the same year.

It comes after Wegovy was approved for children as young as 12 years old, after clinical trials showed children aged 12 to 17 who used the drug lost 14 percent of their bodyweight in 64 weeks.

The above graphic shows how weight-loss drug tirzepatide works. It works to suppress hunger by mimicking hormones indicating that the body is full. It also shows the passage of food through the stomach by reducing the production of stomach acid and contractions of the muscle

Tirzepatide is already approved as a diabetes drug and is currently available off label for weight-loss patients.

It is administered to patients as a weekly injection, which can be done at home.

The drug then works by binding to receptors for two appetite-regulating hormones — GLP-1 and GIP — sending signals to the brain that the body is full.

These also cut stomach acid production and reduce contractions of stomach muscles, reducing the speed at which food moves through the organ.

It differs from Wegovy — made by Danish company Novo Nordisk — because it mimics the effects of two hormones, whereas Wegovy only copies GLP-1.

Yale University’s Dr Ania Jastreboff, who led clinical trials of the drug, heralded tirzepatide as ‘much more highly effective than any other medications we’ve had for the treatment of obesity’.

A phase three clinical trial involving 2,500 obese and overweight adults found tirzepatide slashed their bodyweight by a fifth in 72 months.

For comparison, trials for Wegovy found participants lost about 15 percent of their bodyweight on average in 68 weeks. 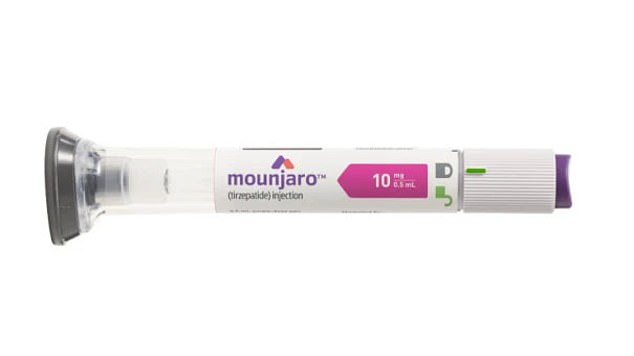 Scientists have hailed ‘incredible’ weight loss and diabetes management results from a clinical trial of tirzepatide, sold under the brand name Mounjaro

The Food and Drug Administration (FDA) has fast-tracked its application to have the drug green-lit for weight-loss in October.

This category is reserved only for treatments that treat serious conditions or could fulfill an unmet medical need.

Eli Lilly will submit data on a rolling basis, with its phase three clinical trials expected to be complete by the end of April 2023.

Estimates from Bank of America analyst Geoff Meacham said annual sales could hit $48billion once it is approved.

Another Wall Street analyst at UBS, Colin Bristow, forecast the drug could pull in $25billion a year.

He told NBC News: ‘It’s just pretty clear how strong the demand is.’

In 2021, Danish company Novo Nordisk earned about $1.2billion in sales of Wegovy and its earlier weight loss treatment Saxenda.

Bosses at Eli Lilly have not revealed how much they will charge for the treatment once it gets the green light.

But Dr David Rind, the chief medical officer for the Institute for Clinical and Economic Review research group, suggests tirzepatide may be marketed at around $1,100 a month — or $13,000 annually.

Some insurance companies will cover the drugs for treating type 2 diabetes, but most are expected to shy away from covering them for weight loss — meaning patients will need to pay out of pocket.

Obesity is still primarily seen as a behavioral problem rather than a medical one, making many insurers reluctant to cover new therapies.

The predictions come despite tirzepatide currently being in shortage in the United States because of high demand, according to the FDA.

In mid-December the agency warned there would be delays in shipments of some doses as Eli Lilly struggled to keep pace with demand.

The company is currently doubling capacity at its facility in North Carolina, with work expected to finish at the end of 2023.

‘We do expect to see intermittent delays at wholesalers and pharmacies in receiving some Mounjaro doses,’ chief financial officer Anat Ashkenzazi said.

An obesity drug given in weekly jabs more than halves the risk of developing type 2 diabetes, a landmark review suggests.

Patients can inject themselves with semaglutide, which works by hijacking the brain to suppress appetite and slash calorie intake.

Overweight and obese participants given the regular doses saw their odds of suffering the condition fall by up to 61 per cent.

The drug, called Wegovy, has been approved for use in England after it was shown to help patients lose an average of 15 per cent of their body weight, equal to 2st 7lb.

Around 4.5million people are living with type 2 diabetes in England, which costs the NHS more than £10billion a year.

Researchers carried out a new analysis of data from two previous trials of semaglutide to assess its impact on the condition.

Study leader Dr Timothy Garvey said the average weight loss of 15 per cent was ‘sufficient to treat or prevent a broad array of obesity complications that impair health and quality of life’. He added that this effect ‘is a game changer in obesity medicine’.