Mammals that have big brains tend to be less abundant and at higher risk of extinction than mammals with smaller brains, a new study claims.

It’s likely that big brains take more food and resources to sustain, they explained, equating to a much harder survival challenge.

The link between big brains and low populations was found to be particularly pronounced in primates and meat-eating mammals – apart from humans.

‘Although they are associated with being smarter, we found that bigger brains may actually hold mammals back from becoming the most abundant organisms in an area,’ said study leader Dr Manuela González-Suárez at the University of Reading.

‘This may be because bigger brains require more food and other resources, and therefore more space, to sustain them.

‘Understanding which animals are more abundant in different areas is important for conservation.

The team wanted to find why populations densities of land mammals like mice, monkeys, kangaroos and foxes vary so widely in local areas, even among similar creatures. 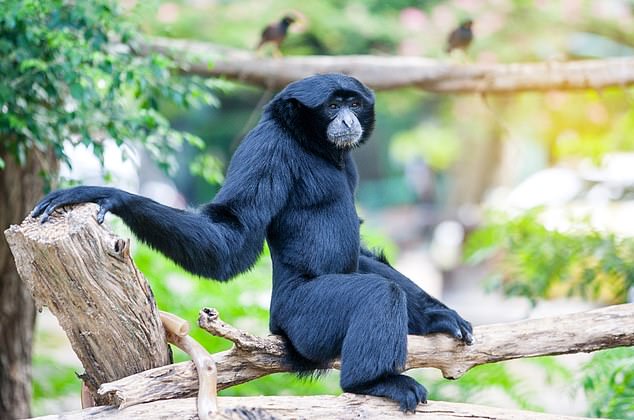 The siamang (Symphalangus syndactylus) is an arboreal black-furred gibbon native to the forests of Malaysia, Thailand, and Sumatra

Although body size and diet are known to influence population densities, scientists had previously disagreed over the influence of big brains.

On one hand, it was thought bigger brains increased population densities in local areas by giving creatures the ability to exploit new resources.

But it was also possible bigger brains decreased population densities due to requiring additional resources.

Using statistical models to test different scenarios for the species, they found an overall trend of mammals with larger brains occurring at lower densities, supporting the latter theory.

Where different species had similar diets and body masses, brain size was found to be the deciding factor.

Examples from the study included the Barbary macaque (macaca sylvanus), a species of monkey found in Gibraltar. 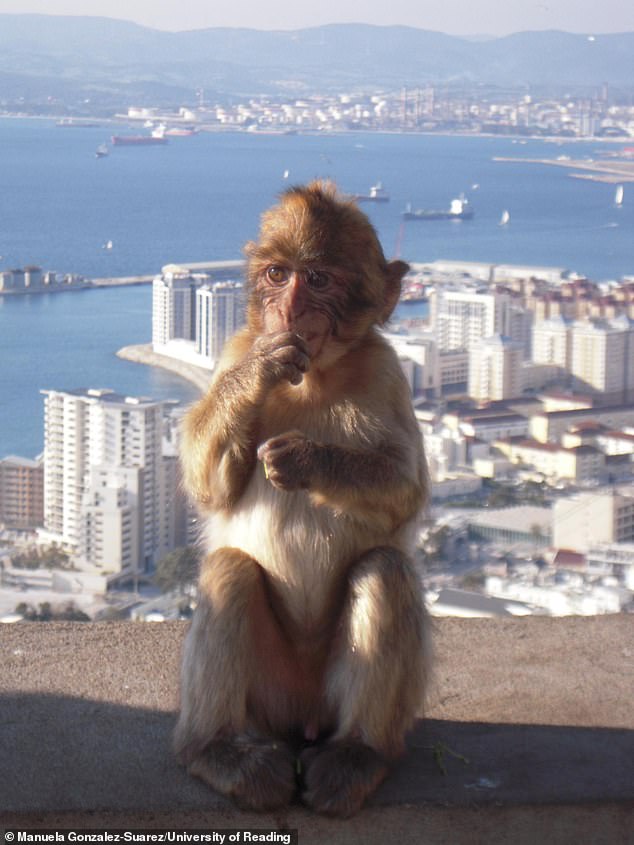 A Barbary macaque (Macaca sylvanus) in Gibraltar. This species has a smaller brain and three times the population density of the siamang

This species has an average body weight of 24 pounds (11kg) and a brain weighing 3.3. ounces (95g), and an average population density of 36 individuals per square kilometre.

This density is nearly three times greater than the siamang (symphalangus syndactylus), a black-furred gibbon native to the forests of Indonesia, Malaysia, and Thailand.

Siamang has the same average body weight and diet, but a larger brain weighing 4.3 ounces (123g) and an average population density of 14 individuals per square kilometre.

Overall, the team found the link between big brains and low densities was particularly strong for primates and meat-eating mammals.

But it was less clear in rodents, marsupials and even-toed ungulates (Artiodactyla) – an order of animals that includes pigs, camels and deer.

Brain size is not the only factor that influences mammal abundance, however.

‘Different environments have different levels of stability and competing species, so these will also have an impact,’ said Dr González-Suárez. 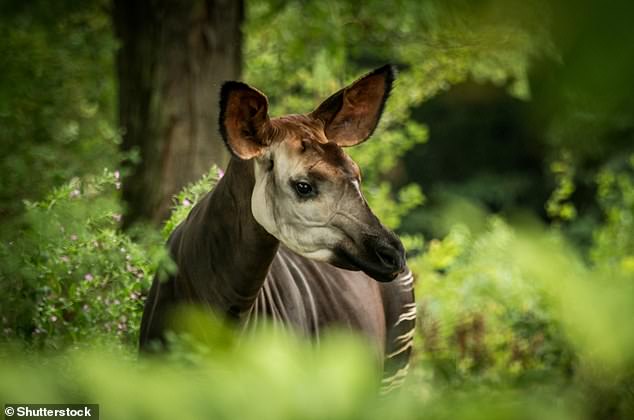 The effect was not clear for rodents, ungulates (of the order Artiodactyla) and marsupials. Pictured, the forest giraffe (Okapia johnstoni), an Artiodactyla

‘Further research is required to see how the effect of brain size varies in these different environments.’

And humans prove an exception to the big brain, low density link – the very fact we are big brained species allows us to thrive.

‘Humans appear to have used their advanced intelligence to overcome resource limitations, through agriculture and food production,’ said Dr González-Suárez.

‘We can import foods from halfway round the world to allow us to theoretically live almost anywhere in large numbers.

‘Some other brainy species may also be able to partially overcome these limitations.’

The study has been published in the Journal of Animal Ecology.

Humans develop motor skills later than other primates because of our bigger brains: 2020 study 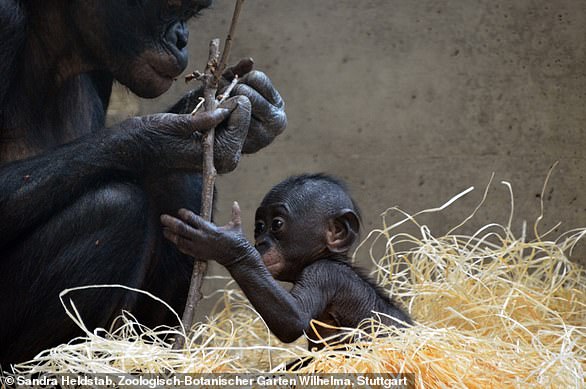 Humans develop fine motor skills later than other primates because we have bigger brains that take longer to develop, biologists in Switzerland reported in July 2020.

Although ‘a big brain equals great dexterity’, humans have to wait relatively longer to develop full dexterity, allowing us to tie shoelaces, hold a pen or use cutlery.

Researchers at the University of Zurich studied more than 30 different primate species across seven years.

While species of great apes – including homo sapiens – have big brains and can therefore learn very skilful dexterity, they take longer to fully develop, they found.

In comparison, squirrel-like tamarins achieve their full potential when it comes to mastering objects quicker, but don’t have the skills of more sophisticated primates.

Despite humans taking longer to reach the peak of our skill potential, biologists claim to have found a common pattern across the different primate species.

They say the complex motor skills for manipulating food and tools develop in distinct stages that are apparent across nearly all primate species.

‘It is no coincidence that we humans are so good at using our hands and using tools, our large brains made it possible,’ said Dr Sandra Heldstab, an evolutionary biologist in the Department of Anthropology at the University of Zurich, Switzerland.

‘Our results show that the neural development follows extremely rigid patterns – even in primate species that differ greatly in other respects.’