Joe Biden’s campaign announced Thursday that it brought in $34.2 million in donor dollars since unveiling Sen. Kamala Harris as the vice presidential pick.

Biden’s digital director Rob Flaherty announced the sum via Twitter, saying the amount was raised between August 11 and 12, the date Harris’ name was first revealed and when she made her first appearance on the campaign trail alongside the presumptive Democratic nominee.

Flaherty also revealed that $1.3 million was spent on yard signs emblazoned with the new Biden-Harris logo.

Joe Biden’s (left) campaign has brought in $34.2 million since announcing that Sen. Kamala Harris (right) would be his running mate on the Democratic ticket 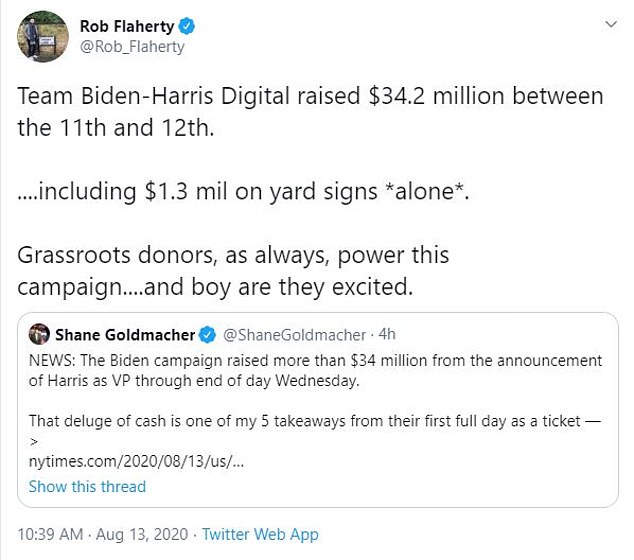 On Wednesday night, at the first fundraiser where Biden and Harris appeared together, the former vice president revealed the tally was up to $26 million, with the campaign garnering 150,000 new donors.

Biden outraised President Donald Trump in May and June, but Trump bested the Democrat in July.

Biden and the Democrats, however, were in a competitive place at the end of July due to more frugal spending than Trump and the GOP.

A little after 4 p.m. Tuesday the Biden campaign announced Harris as his running mate via a text message to the former vice president’s supporters.

About 24 hours later, Harris and Biden appeared together in Wilmington, Delaware to make the partnership official.

Biden had promised in March that he would select a female running mate to add balance and diversity to the Democratic ticket.

After the Memorial Day death of George Floyd that inspired global Black Lives Matter protests, there was additional pressure on the presumptive Democratic nominee to pick a woman of color.

In the days leading up to the announcement of Harris, Biden was suspected to have narrowed the field down to Harris, California Rep. Karen Bass and former U.N. Amb. Susan Rice.

Of the three, Harris was the most well known to the American people having run for the 2020 Democratic nomination herself, dropping out of the presidential race in December.

She made waves during the first Democratic debate by going after Biden – the heir apparent to the nomination – for talking up his work with pro-segregation Democrats and his stance on desegregation busing.

On Wednesday, Biden indicated anything that happened during the primary was water under the bridge.

He welcomed Harris and her husband Douglas Emhoff to the campaign as ‘honorary Bidens’ and spoke endearingly about his new running mate’s friendship with his late son Beau.