President Joe Biden slammed the Supreme Court again on Saturday and said it has made some ‘terrible decisions.’

He declined to answer questions on whether or not the justices should face term limits or the court should be expanded.

‘The Supreme Court has made some terrible decisions,’ Biden said at an event where he signed an historic gun bill into law.

Six of the nine justices have been appointed by Republican presidents.

Biden started the bill signing by blasting the Supreme Court for its Friday decision that overturned Roe v. Wade – the landmark case that made abortion legal in the country.

The decision sparked outrage and joy with protests and celebrates sparking up around the country as pro-choice advocates expressed outrage and pro-life supporters were joyful.

Democrats, however, showed their fury and Biden is under heavy pressure to use his executive powers to do something. His administration also has urged Congress to codify abortion rights into law.

Biden said his administration would focus on fighting for reproductive rights on a state level.

‘I know how painful a devastating that decision is for so many Americans. I mean so many Americans. The decision is implemented by states. My administration is going to focus on how they administer it and whether or not they violate other laws, like deciding while people across state lines to get public health services. And then we’re going to take action to protect women’s rights and reproductive health.’

State attorney generals will likely be the front line of defense as the abortion battle continues across the country. They are the top legal officers in their states and could bring additional lawsuits regarding reproductive rights. 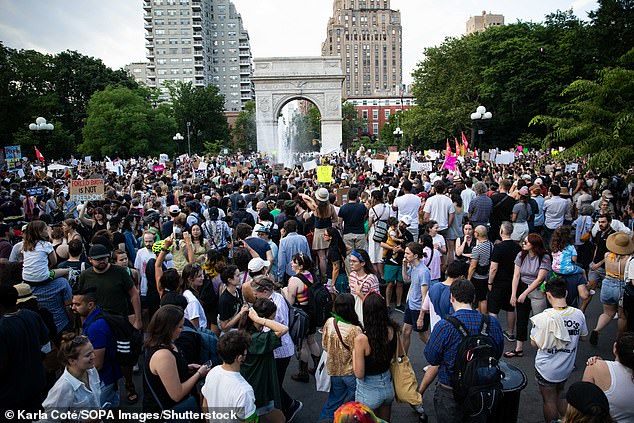 Vice President Kamala Harris met with state attorneys general last week ahead of the Supreme Court decision as the administration prepared for the expected ruling.

‘I have asked these attorneys general to meet with us knowing that they have a pivotal role to play in defending women’s reproductive freedom and their rights to make decisions about their own body,’ Harris said at the top of the meeting.

She said the attorneys general may have to challenge any Supreme Court ruling.

Harris has taken the lead for President Joe Biden’s administration on defending abortion and reproductive rights.

Biden, on Friday after the ruling was dropped, called it ‘a very solemn moment’ and a ‘sad day for the court and the country.’

‘It just stuns me,’ he uttered.

The president called on Congress to restore the rights that were in Roe – and told supporters of abortion-rights to vote in the midterms on candidates that share that belief.

Biden also vowed that his government would ensure women aren’t barred from traveling to states that still allow abortion – and would have access to medication that terminate pregnancies.

‘This decision must not be the final word,’ the president also said. ‘This is not over.’

Tensions over the future of abortion rights in the country have been running high since a draft opinion of Dobbs v. Jackson Women’s Health Organization was leaked last month – and showed that the high court’s conservative majority was poised to push whether abortion was legal back to the states. 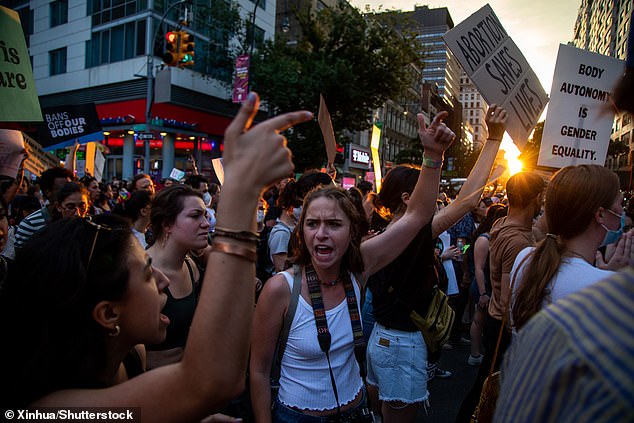 Demonstrators march during a protest against the Supreme Court’s overturning of the Roe vs. Wade abortion-rights ruling in New York,

‘Guided by the history and tradition that map the essential components of the Nation’s concept of ordered liberty, the Court finds the Fourteenth Amendment clearly does not protect the right to an abortion,’ the decision, penned by conservative Justice Samuel Alito, said.

The decision reflects the stunning change in the court’s direction after Donald Trump’s four-year term. The court switched from a 5-4 majority where Roberts was often the swing vote, to a 6-3 conservative court with the addition of Justice Amy Coney Barrett, who was confirmed by the GOP Senate following the death of Justice Ruth Bader Ginsburg.

The decision also savaged the Planned Parenthood v. Casey ruling, which preserved abortion rights with its prohibition on laws that impose an ‘undue burden’ on the mother. ‘The decision provided no clear guidance about the difference between a ‘due’ and an ‘undue’ burden. But the three Justices who authored the controlling opinion ‘call[ed] the contending sides of a national controversy to end their national division’ by treating the Court’s decision as the final settlement of the question of the constitutional right to abortion,’ Alito wrote.

Alito wrote: ‘Roe’s failure even to note the overwhelming consensus of state laws in effect in 1868 is striking, and what it said about the common law was simply wrong. Then, after surveying history, the opinion spent many paragraphs conducting the sort of fact finding that might be undertaken by a legislative committee, and did not explain why the sources on which it relied shed light on the meaning of the Constitution.’