Elon Musk has suggested that the Biden administration could kill his Twitter deal following reports that officials are discussing opening an investigation over national security concerns.

US officials are allegedly growing uncomfortable with Musk’s $44 billion venture with a group of foreign investors to purchase the social media platform, sources familiar with the matter told Bloomberg.

There’s also concerns of Musk’s recent threat to pull his Starlink satellite service from Ukraine amid tweets suggesting that the country give up part of its territory to Russian invaders.

It comes as Twitter’s stock fell by 4.67 percent when the markets opened on Friday, a day after Musk vowed to cut the company’s workforce by 75 percent.

The government’s possible interference in the deal would be the latest in Musk and Joe Biden’s turbulent relationship as the two have often snubbed each other.

Musk has been critical of the president’s handle on inflation and the economy, and in turn, Biden has repeatedly failed to mention Tesla as a critical part of his plan for more electric cars in America’s future, favoring GM and Ford instead.

While Musk, 51, has yet to comment on the possibility of an investigation, he simply laughed at the idea on Twitter that the Biden administration could be the one to stop him for what he’s said is ‘paying to much’ for the social media company.

The cost of the deal would chip away further at Musk’s fortune as it’s revealed that he’s lost more than $100 billion of his net worth.

The world’s richest man made headlines last November after his wealth soared to $320.3 billion, but nearly a year later, Forbes estimate’s Musk’s current worth at $209.4 billion, a 35 percent drop. 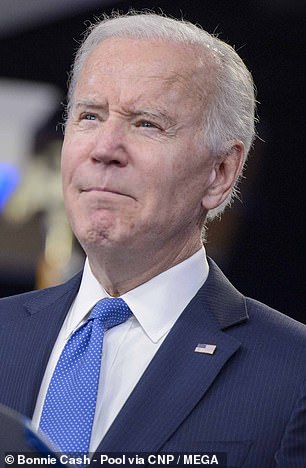 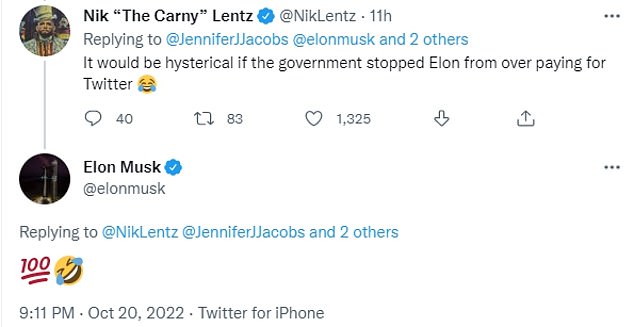 Musk laughed at the prospect that Biden, who he has a tumultuous relationship with, could stop him from what he said is ‘paying too much’ for Twitter 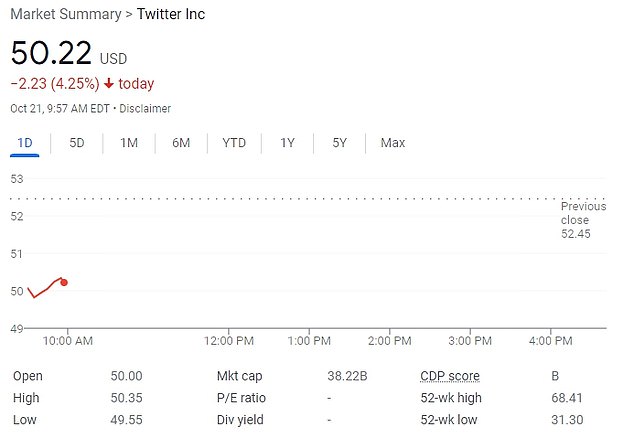 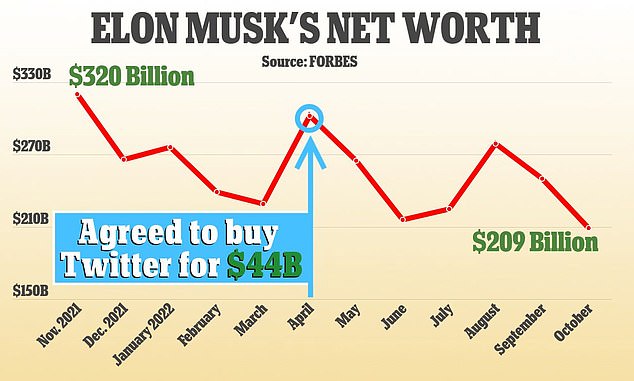 Sources speaking under the condition of anonymity told Bloomberg that the government’s discussions are still at an early stage, and it is unclear if they have a solid avenue to investigate Musk’s business ventures.

An investigation could be conducted by the Committee on Foreign Investment in the US (CFIUS), which reviews acquisitions of American businesses by foreign buyers.

The probe would be triggered because Musk has gathered several foreign investors to aid him in the Twitter takeover, including Prince Alwaleed bin Talal of Saudi Arabia; Binance Holdings, a company run by a Chinese native; and Qatar’s sovereign wealth fund.

The CFIUS operates behind closed doors and does not typically confirm when a review is being conducted.

An investigation into the social media deal could also come as a result of a greater probe into the Starlink incident. 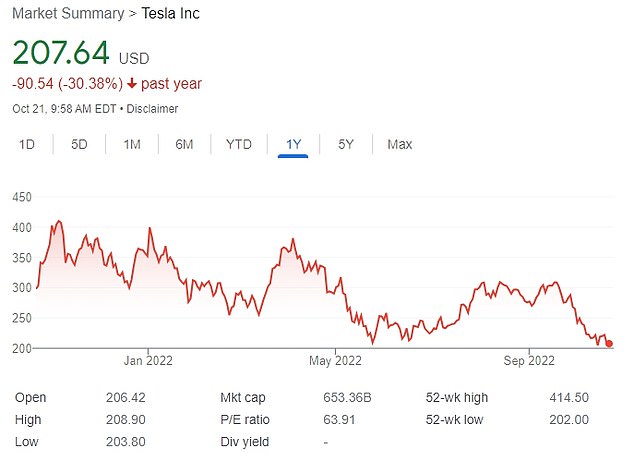 Much of Musk’s fall in net worth can be attributed to a tough fiscal year for Tesla, with shares down more than 30 percent since Musk reached his peak $320billion fortune

Last week, Musk claimed he cannot afford to keep funding Starlink satellites that have proved vital for Ukraine in defending itself against Russia, raising fears he may cut support.

Starlink terminals have allowed Ukrainian commanders and units to communicate on the battlefield when their usual networks have been taken down by Russia, and have proved vital to the war effort.

They have also helped Ukrainian troops control drones which assist with reconnaissance, attacks on enemy tanks, and directing artillery fire.

The world’s richest man, with a personal fortune north of $200billion, said it is costing firm SpaceX $20million per month to maintain the network that keeps roughly 20,000 Starlink terminals in Ukraine running and it is not sustainable.

In October alone, Musk’s fortune fell from $237billion to $209billion as of Thursday.

Much of the dip in wealth can be attributed to a fall in Tesla’s stock as investors worry about his deal to buy Twitter by selling shares.

Musk has sold $31billion worth of Tesla stock, and in one year, the company’s shares have dipped by more than 30 percent.

Wedbush analyst Dan Ives told Forbes that the stock would continue to fall as Musk looks to close the Twitter deal.

‘The problem for Tesla investors is that more stock sales are likely by Musk to fund this deal which we believe will go down as one of the worst, most overpaid M&A deals in the history of the market,’ Ives said. 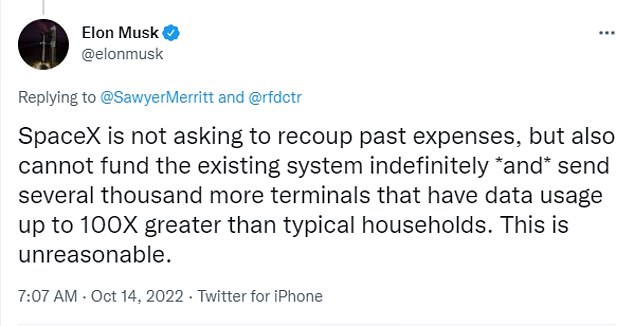 Elon Musk, the billionaire owner of SpaceX, says the firm cannot continue paying for Starlink terminals to Ukraine that have proved vital in the war against Russia 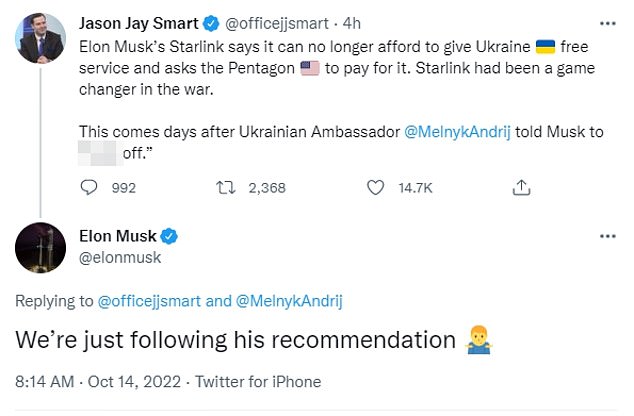 Musk lashed out at the Starlink expenses just days after tweeting a ‘peace plan’ that proposed handing chunks of Ukrainian territory to Russia that prompted a clash with President Zelensky and saw ambassador Andreij Melnyk tell him to ‘f**k off’.

Possible interference from the Biden administration would be the latest in a tumultuous week for Musk and Twitter, who are looking to close on the deal by October 28, according to the order by a Delaware Chancery Court judge.

On Thursday, corporate documents obtained by the Washington Post revealed that the billionaire told prospective investors in his $44 billion deal to buy the social media giant that he plans to get rid of three-quarters of its 7,500 workers.

That would leave the company with just a skeleton crew of just over 2,000 employees, which experts say would make it difficult for the social media company to tamp down on what it deems to be ‘misinformation.’

Now, a number of employees are expressing their fears they may be one of the more than 5,000 workers laid off from the company when Musk, 51, takes over. 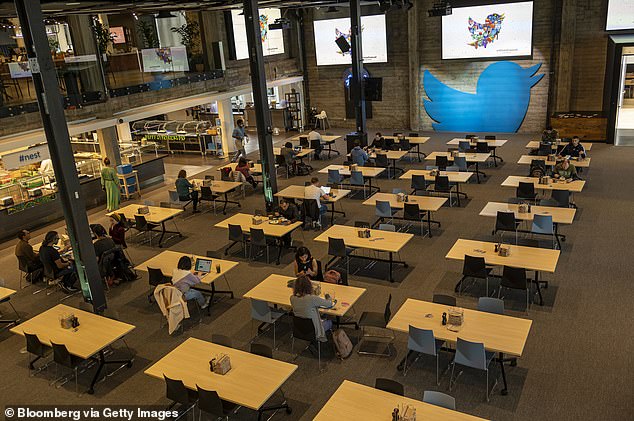 Executives at the company had already been planning to cut a quarter of its workforce after it spent a whopping $1.5 billion on personnel last year. Twitter employees are seen here in March

Matt Walker, a product designer for Twitter, meanwhile, went of on Musk and former CEO Jack Dorsey in a series of tweets Thursday night, writing: ‘Every decision Jack has made has gotten us to this point.’

He also tweeted that the common thread between the news of MailChimp’s CEO writing in an email that pronouns do ‘more harm than good’ and Musk’s planned layoffs is ‘billionaires are a**holes.’

And in his final tweet, Walker wrote that he was ‘doom scrolling on the very source of the doom.’

A finance advisor for the company, meanwhile, asked if anyone cared about her while Steph Jeong, a designer, simply tweeted: ‘Sigh.’

Matt Walker, a product designer for Twitter, meanwhile, went of on Musk and former CEO Jack Dorsey in a series of tweets Thursday night while Steph Jeong, a designer, simply tweeted: ‘Sigh’

Musk’s plans would cut far more jobs than Twitter’s current management had been planning to lose, the effects of which would be massive.

But it would provide Twitter’s leadership with a way to save face and avoid announcing layoffs to one-quarter of the workforce they were already planning to reduce costs.

The company spent a whopping $1.5 billion last year on personnel, and had wanted to reduce that amount by some $800 million.

Management also planned to make major cuts to its infrastructure, getting rid of data centers that keep the site functioning for more than 200 million users a day.

Twitter executives, though, have denied any layoffs, with General Counsel Sean Edgett telling employees on Thursday to expect ‘tons of public rumors and speculations’ as the closing of the deal nears.

‘Since the merger agreement has been in place, there have been no plans for companywide layoffs,’ he said, according to Bloomberg.