President Joe Biden rolled out a new nickname for MAGA Republicans on Labor Day during a lively speech where he also walked back comments suggesting Donald Trump’s supporters believe in ‘semi-fascism.’

During his speech in Wisconsin on Monday, the president denounced the former president’s followers as ‘Trumpies’ and claimed politicians on the ‘extreme right’ of the GOP are ‘coming for your social security’ and destroying worker pensions.

At one point Biden was interrupted by a heckler – though he told Secret Service to ‘let him go.’

‘Everybody’s entitled to be an idiot,’ the president said to scattered laughter.

And despite clarifying early on that ‘not every Republican is a MAGA Republican,’ he later painted the critic and his ilk as working to ‘destroy democracy.’

‘The biggest contrast from what MAGA Republicans, the extreme right…the Trumpies…is these MAGA Republicans in Congress are coming for your Social Security as well,’ Biden said.

‘You can’t call yourself a democracy when you don’t count the votes that people legitimately cast,’ Biden said.

He also gave a shout-out to Pennsylvania candidate for Senate John Fetterman – after Senate candidate Mandela Barnes wasn’t at his Milwaukee event.

The 79-year-old leader has ratcheted up his rhetoric against the former president and his allies in recent days, ever since making a fiery debut on the midterm campaign trail in Bethesda, Maryland late last month.

It was at a private event with donors there that the president compared MAGA Republican beliefs to semi-fascism, earning instant backlash from all factions on the right.

President Joe Biden made the first of two Labor Day stops in Wisconsin on Monday, where he touted his wins for workers’ unions and lashed out against ‘MAGA Republicans’

‘But the extreme MAGA Republicans in Congress have chosen to go backwards – full of anger, violence, hate and division,’ the president said. ‘But together, we can and must choose a different path: forward.’

Later, however, Biden turned up the heat again as the heckler who interrupted his speech was being pulled out by security.

‘Democrats, Republicans and mainstream – Republicans and independents, we have to be stronger and more determined and more committed to saving American democracy,’ the president implored above the commotion.

‘And the MAGA Republicans – that guy out that door- are destroying democracy. Because democracy is at stake.’ 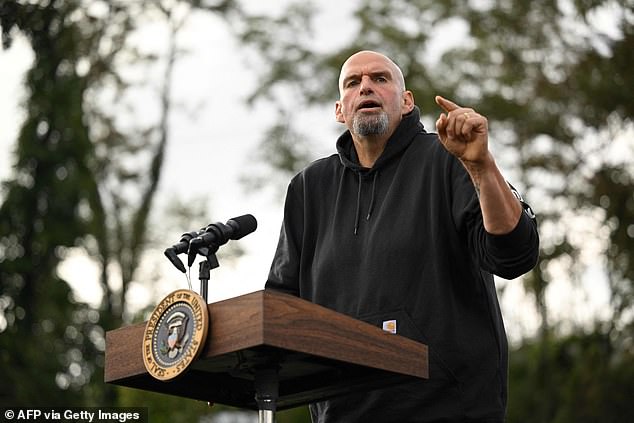 ‘If I have a to be in a foxhole, I want John Fetterman in there with me,’ Biden said of the Pennsylvania candidate for Senate 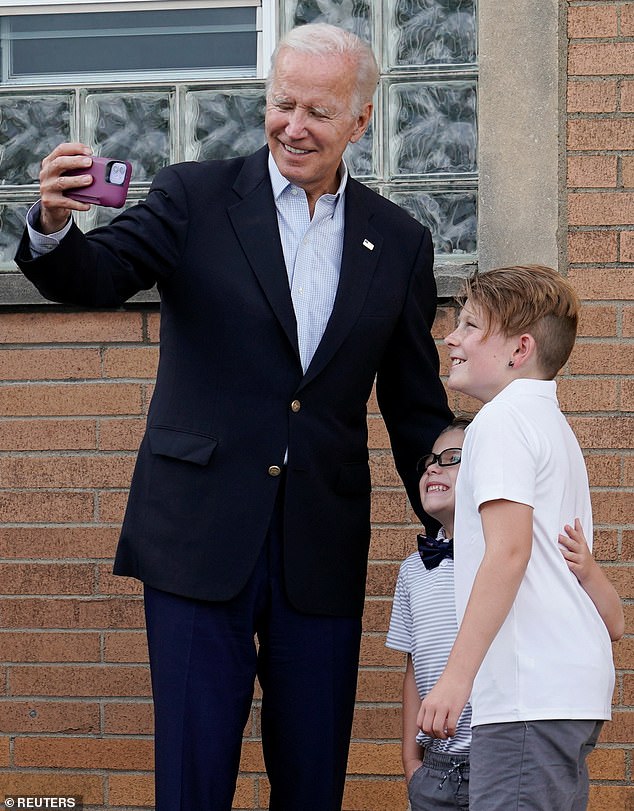 Biden posed for a picture with children as he attends a Labor Day celebration at the United Steelworkers of America Local Union 2227 in West Mifflin, Pennsylvania 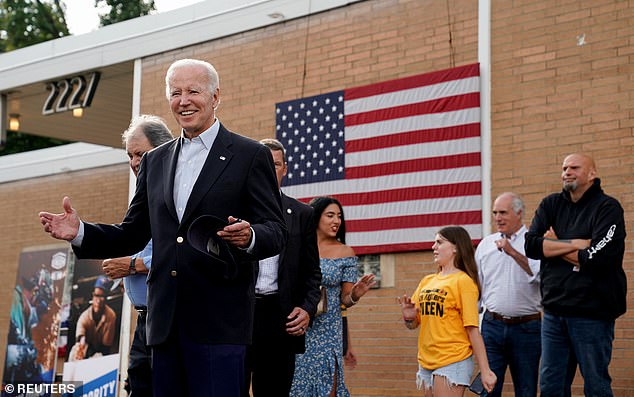 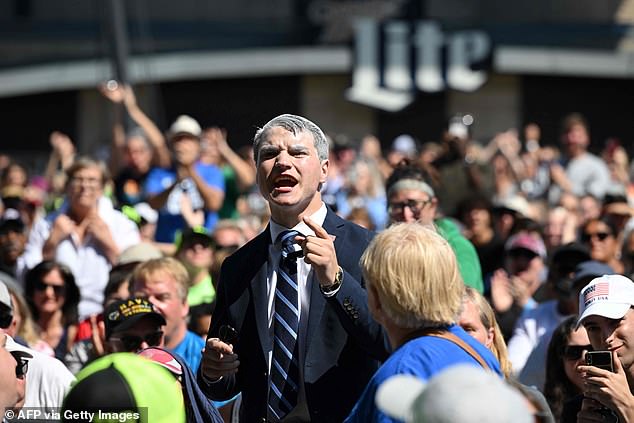 At one point a man in a suit heckled the president’s speech. It’s not clear what the man was shouting 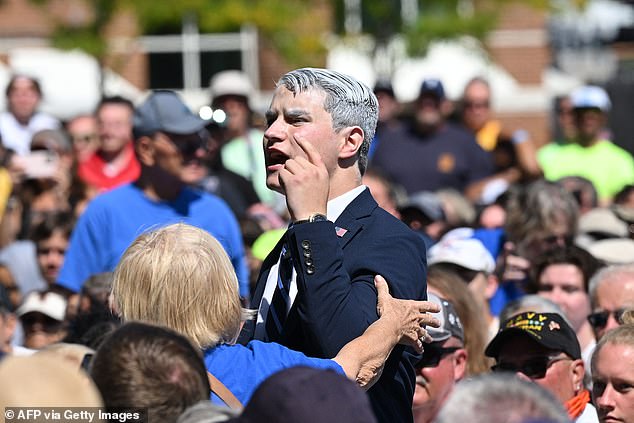 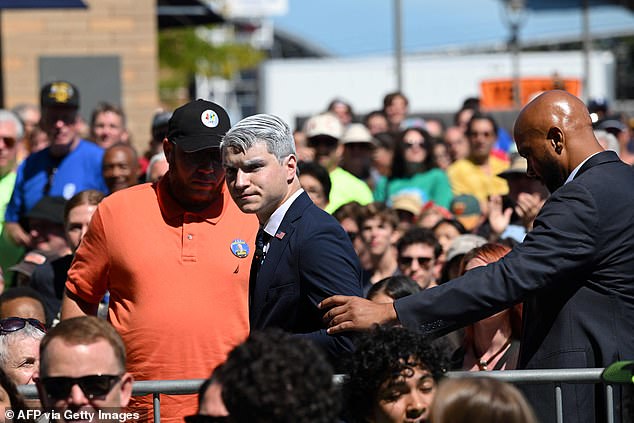 The man, wearing an American flag pin, was called a ‘MAGA Republican’ by the president

The president was impassioned as he repeatedly drummed Republican lawmakers – including Wisconsin Senator Ron Johnson – for voting against his agenda, including the $1.2 trillion bipartisan infrastructure deal.

He also attacked the GOP for opposition to the Butch Lewis Act, a provision in the COVID-19 pandemic-era American Rescue Plan that protected the pensions of roughly 10 million union workers.

Biden claimed that Republicans who supported the bill voted against it over re-election concerns.

‘Not a single Republican congressman voted to protect your pensions – not one. And by the way, I know a lot wanted to vote for it. They’re afraid of losing primaries in this new Republican Party,’ he said.

Touting the recently-passed Inflation Reduction Act – a climate and healthcare spending bill that passed without any Republican support – Biden thundered: ‘We beat pharma this year, and it mattered. We finally beat Pharma.’

Notably absent from the event was Democrat Mandela Barnes, Wisconsin’s lieutenant governor who is running to unseat GOP Sen. Johnson in November.

Biden said at the outset of his remarks that Barnes ‘couldn’t be here’ but is ‘gonna be your next United States senator.’

Barnes’ campaign told DailyMail.com that the Democratic official was participating in other Labor Day events across his state.

‘The Lt. Governor appreciates the President coming to Wisconsin to honor the labor movement in our state,’ spokeswoman Maddy McDaniel said in an email.

‘Mandela walked in the Milwaukee parade and then went to support Wisconsin workers at events across the state, including in Racine where UAW Local 180 has been on strike for over 100 days.’

It comes as Democrats across the country are experiencing a surge in approval numbers that’s relatively uncommon for the party in power during a midterm election year.

Biden’s own job approval rating had rebounded in recent weeks, though Democrats in swing states and districts still appear to be treading carefully – particularly as the president ratchets up his anti-Trump rhetoric.

‘When I say that democracy is at stake, I mean what I’m saying literally. You can’t say you support law enforcement and call the people who attacked the police on January 6 “patriots.” This was an attack on American democracy,’ the president said in Wisconsin – referencing Trump’s support for the Capitol riot.