Joe Biden pledged a ‘long’ relationship with Israel during his one-on-one meeting with Prime Minister Yair Lapid on Thursday, where the president pushed for stronger regional ties amid a growing threat from Iran.

Biden said it was important for Israel to be integrated into the region and emphasized how ‘the vast majority’ of the American public was devoted to Israel.

‘We had a good beginning of a long, god willing, relationship,’ Biden said.

‘I talked about how important it was from my perspective for Israel to be totally integrated into the region,’ he noted. ‘I think the vast majority of the American public, not just my administration, is completely devoted to Israel’s security.’

The Biden administration sees stronger Israeli ties to its Muslim neighbors as a key to countering Iran’s growing threat in the region.

Lapid said he was ‘trying to build even more moderate coalitions in the Middle East’ as he worked to make sure there was no nuclear Iran.

‘We discussed the Iranian threat,’ he said. ‘There will be no nuclear Iran. This is not only a threat to Israel, but to the world, and we discussed some other issues we are going to keep to ourselves.’

The meeting, where the two men were jovial and emphasized the deep relationship between the two countries, came the day before Biden leaves for Saudi Arabia.

They even joked they had talked baseball.

Later the two men will sign a joint declaration emphasizing military cooperation as well as their commitment to preventing Iran from obtaining a nuclear weapon.

‘You´ll see in the joint declaration is a pledge and a commitment never to allow Iran to acquire a nuclear weapon and that we’re prepared to use all elements of our national power to ensure that outcome,’ a senior administration official said.

Biden’s meeting comes as he seeks to strengthen the already strong ties with Israel, a longtime American ally.

The president on Thursday will also hold a closed-press meeting with former PM Benjamin Netanyahu.

He’ll receive the Israeli Presidential Medal of Honor from President Isaac Herzog and greet U.S. athletes when he attends the opening ceremonies of the Maccabiah Games, which involve thousands of Jewish and Israeli athletes from around the globe.

But one of Biden’s main agenda items is to help strenghten Israeli ties to its neighbors to counter growing concerns about Iran’s nuclear programs.

Biden is insistent upon rejoining the Iran nuclear deal, even as the Israeli public is largely against it.

‘Because the only thing worse than the Iran that exists now is an Iran with nuclear weapons,’ he said.

Biden continued by saying, ‘I think it was a gigantic mistake for a U.S. president to get out of the deal.’ 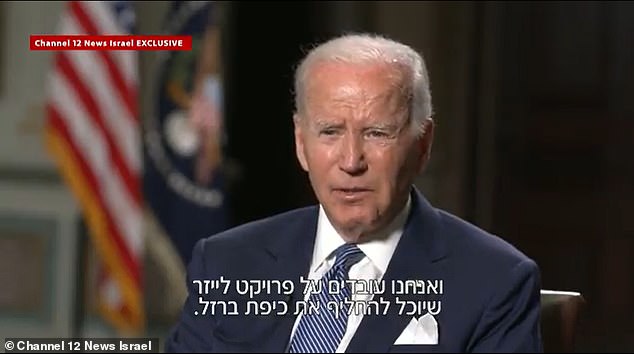 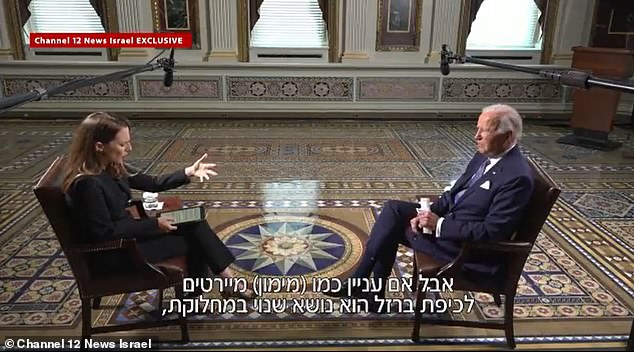 ‘They’re closer to a nuclear weapon now than they were before,’ he added.

Biden also said he was open to using force to prevent Iran from getting a nuclear weapon.

‘If that was a last resort, yes,’ he answered.

Biden is in Isreal through Friday and then heading to Saudi Arabia, for a controversial meeting with Saudi leaders including Crown Prince Mohammed bin Salman – known as ‘MBS’ – who was implicated in the murder of journalist Jamal Khashoggi.

Biden added that some people believed that the United States ‘sort of walked away’ form the Middle East while Trump was president.

‘That we were going to create a vacuum that China and/or Russia would fill, and we can’t let that happen,’ Biden said.

The president continued by saying he believed that ‘the more Isreal is integrated in the region as an equal and accepted the more likely there is going to be a means by which they can come to an accommodation with the Palestinians down the road.’

Biden relented that the normalization of relations between Israel and Saudi is ‘going to take a long time.’

‘But increasing the relationship in terms of acceptance of each other’s presence, working together on certain things, it all makes sense to me,’ the president added.

Biden will make history when he flies directly between Israel and Jeddah, Saudi Arabia – being the first U.S. president to do so.

During the 13 minute sit-down, Biden also whacked progressives in his party who tried to strip Iron Dome funding out of Congressional spending bills.

Biden added that during his administration $4billion in support has been provided to the Israelis for the country’s Iron Dome missile defense system, and the two countries are currently working on a laser system to replace Iron Dome.

Biden was briefed on Iron Dome and its replacement, dubbed Iron Spear, during his first stop in Israel Wednesday.

‘There’s no possibility, I think, of the Democratic Party or even a significant portion of the Republican Party walking away from Israel,’ Biden added.

Among those Biden is meeting with in Isreal is the former prime minister, Benjamin Netanyahu, who’s now the opposition party leader.

Netanyahu could come into power again after Israel’s November elections.

He’s been more politically aligned with American Republicans than Democrats.

Still, Biden told Keshet 12’s Yonit Levi he could work with him.

‘Bibi and I have known each other for close to 40 years. We know where we agree, and where we disagree, and we make no bones about it,’ Biden said.

‘I’m dealing with a democratic state that is going through a decision of who they’re going to have as leader,’ he continued, adding that he would work with whomever is elected.

Biden also talked about the importance of the west standing up against Russian President Vladimir Putin’s invasion of Ukraine.

‘The idea that we would stand by in the West, NATO in particular, and have the largest invasion of physical force in another country since World War Two and stand there, was just not in the cards.’

Biden said the U.S. would support Ukraine for ‘whatever time it takes.’

‘We’re not going to let him prevail,’ he said.

Biden affirmed that it could take months or years at Levi’s suggestion.

When she asked him if he truly believed it could take years the president pushed back, ‘No you said that.’