Two of the world’s largest mining firms have maintained annual guidance, as the FTSE 100 groups posted solid growth in copper production for the last quarter.

BHP generated 410.1 kilotonnes of copper in the three months ending September, a 9 per cent increase on the same period last year, thanks to record production at its Olympic Dam in South Australia following a smelter upgrade.

Meanwhile, Antofagasta saw its copper volumes jump by 40.1 per cent from the previous quarter after improved water availability helped output almost double at its Los Pelambres mine in Chile.

Output: BHP generated 410.1 kilotonnes of copper in the three months to September, while Antofagasta saw its copper volumes jump by 40.1 per cent from the previous quarter

Antofagasta continues to expect copper production for the current financial year to be 640,000 to 660,000 tonnes, which is at the low end of its target range.

In the following 12 months, when construction works at the Los Pelambres desalination plant are set to be finished, it forecasts output of between 670,000 and 710,000 tonnes.

BHP has also kept its production and unit cost outlook for all metals unchanged for the year, though chief executive Mike Henry warned of significant short-term uncertainty. 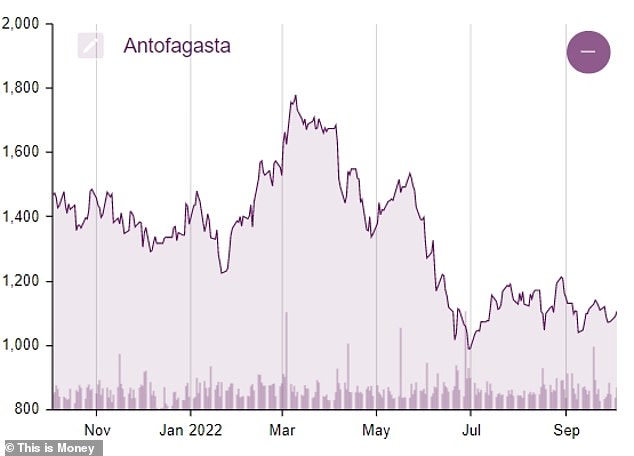 Decline: Antofagasta shares have fallen by around a quarter over the past year

Higher inflation and interest rates are causing a fall in commodity prices and an economic slowdown across many major economies, including China, where the company ships much of its iron ore.

Yesterday, Rio Tinto warned that global economic problems meant iron ore shipments from its Pilbara operations in Western Australia would be at the bottom end of guidance this year.

Nonetheless, Henry said BHP ‘remains well-positioned, with a portfolio and balance sheet to withstand external challenges and a strategy positioned to benefit from the global mega-trends of decarbonisation and electrification’.

Copper is considered a vital element in the planet’s transition to clean energy because of its use in renewable technologies, such as electric vehicle batteries, wind turbines and solar panels.

Yet the Australian miner still earns vast sums from coal, partly due to the Ukraine war causing supply flow disruptions and encouraging consumers to switch from liquefied natural gas.

This helped drive the firm’s profits 173 per cent higher to $30.9billion last year and enabled it to return a record amount of cash to shareholders.

By comparison, copper represents the overwhelming majority of Antofagasta’s production output, although the metal’s declining price in recent months means the company’s financial performance has been impacted on a relative basis.

In its interim results, the company revealed pre-tax profits plummeted by 61.9 per cent to $679.6million and announced a cut to dividend payments, having paid a record amount to investors last year. 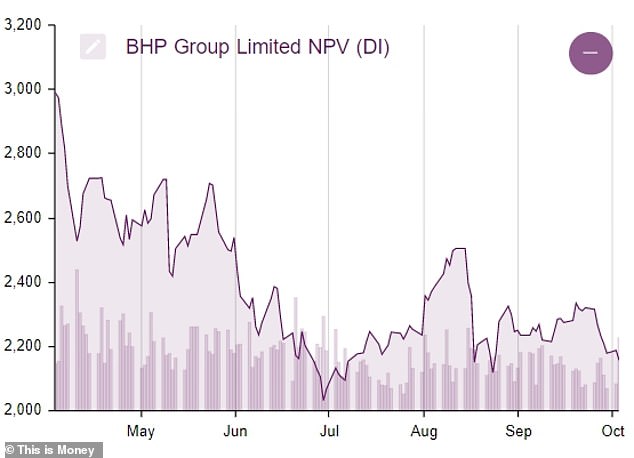 Drop: BHP shares have declined by around 29 per cent in the past six months