Beyond Meat, a maker of meat alternatives, went public on stock markets on Thursday and investors quickly drove up the price of the shares by more than 100 per cent within minutes of being able to buy it.

The company is the first pure-play maker of vegan “meat” to go public, according to Renaissance Capital, which researches and tracks IPOs.

Beyond Meat raised about $240 million US selling 9.6 million shares at $25 each on Wednesday alternative. That values the company at about $1.5 billion.

But when the shares started trading on the Nasdaq on Thursday afternoon, investors quickly bid up the price of the shares to $60. The first trades came in at around $46 per share.

Growing sales, but not profits

The 10-year-old company has attracted celebrity investors like Microsoft co-founder Bill Gates and actor Leonardo DiCaprio and buzz for placing its products in burger joints like Carl’s Jr. It sells to 30,000 grocery stores, restaurants and schools in the U.S., Canada, Italy, the United Kingdom and Israel.

Beyond Meat CEO Ethan Brown said the IPO timing is right because the company wants to expand overseas. He also wants consumers to be able to buy shares since they have fueled the company’s growth.

“It really is a wonderful feeling to be able to welcome people in who have helped this brand,” Brown told The Associated Press. 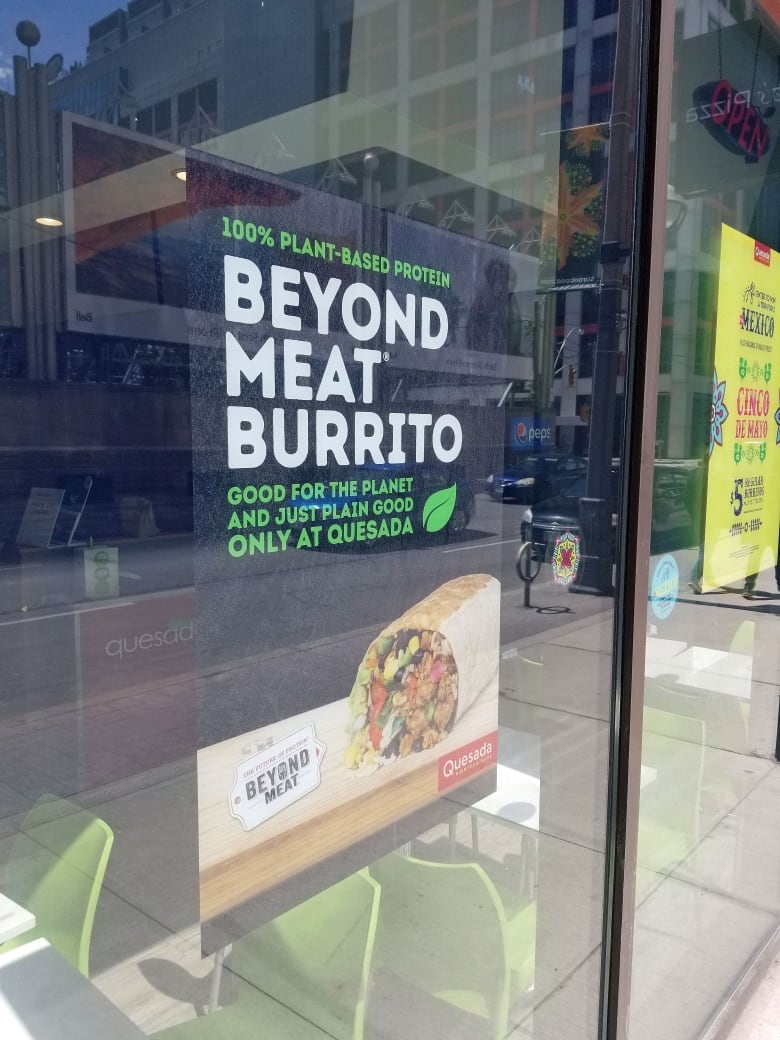 So far Beyond Meat has focused on working with restaurants to sell its products, but it will soon go direct to consumers in the grocery aisle. (Pete Evans/CBC)

Still, Beyond Meat has never made an annual profit; it lost $30 million last year. It’s also facing serious competition from other “new meat” companies like Impossible Foods and traditional players like Tyson Foods Inc. Tyson recently sold a stake in Beyond Meat because it plans to develop its own alternative meat.

The IPO comes amid growing consumer interest in plant-based foods for their presumed health and environmental benefits. U.S. sales of plant-based meats jumped 42 per cent between March 2016 and March 2019 to a total of $888 million, according to Nielsen. Traditional meat sales rose 1 per cent to $85 billion in that same time frame.

The trend is a global one. U.K. sales of meat alternatives jumped 18 per cent over the last year, while sales of traditional meat and poultry slid 2 per cent.

Even Burger King has recognized the appeal. Earlier this week, the fast food chain announced that it would start testing the Impossible Whopper, made with a plant-based burger from Impossible Foods, in additional markets after its month long test in St. Louis proved successful.

Brown says Beyond Meat’s ingredient list — it only uses natural ingredients that haven’t been genetically modified and doesn’t use soy — sets it apart from competitors. Its products are made from pea protein, canola oil, potato starch and other plant-based ingredients. Its burgers “bleed” with beet juice; its sausages are colored with fruit juice.

Unlike competitors, Beyond Meat products have also been sold in the meat section of groceries since 2016. That has broadened their appeal beyond vegetarians. Beyond Meat says a 26-week study last spring showed that 93 per cent of Kroger customers who bought its burgers also bought animal meat during the same period.

Brown says Beyond Meat is working on reducing sodium, which is a natural byproduct of its manufacturing process. But he also points out that red meat and processed meat have been classified as possible carcinogens by the World Health Organization.

Beyond Meat also costs more. For $7.99, consumers can get two 4-ounce patties of Beyond Burger at grocery stores across Canada. 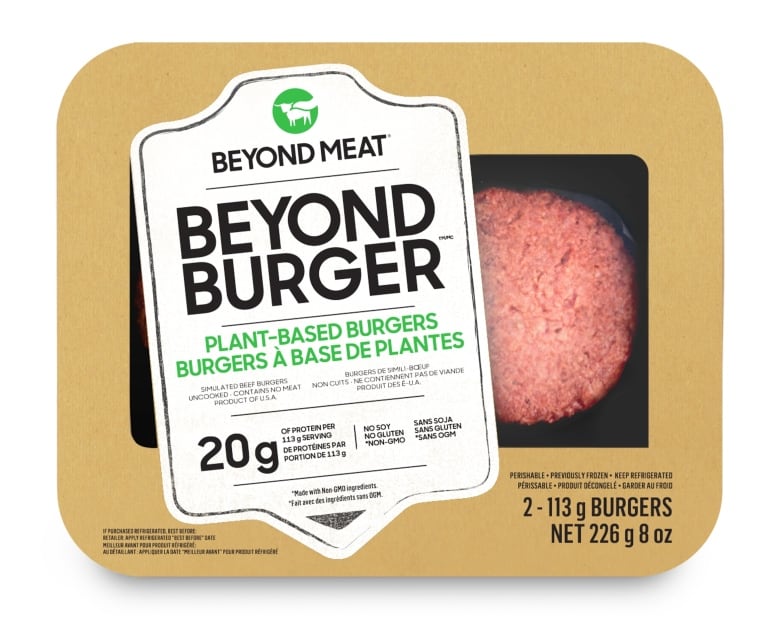 Brown said Beyond Meat has a five-year goal of getting at least one product — most likely beef — to cost less than the animal version. He expects the supply chain will grow as sales expand, which will lower the cost of raw ingredients like peas.

But Beyond Meat touts environmental benefits as well. The company says a plant-based burger takes 99% less water and 93 per cent less land to produce than a beef burger, and generates 90 per cent fewer greenhouse gas emissions.

Beyond Meat was founded in 2009 by Brown, a former clean energy executive. Brown’s family part-owned a Maryland dairy farm, so as a child, Brown spent weekends and summers on the farm. As he grew older, he began to question whether people really needed animals to produce meat.

Brown teamed up with two professors from the University of Missouri, Fu-hung Hsieh and Harold Huff, who had been developing soy-based chicken since the 1980s. By 2013, Beyond Meat was selling plant-based chicken strips nationwide at Whole Foods. (The company discontinued chicken earlier this year but says it’s working on a better recipe.)

For investors, the stock is not without risk. Amid its annual losses, Beyond Meat must also continue to spend heavily on research and development. The El Segundo, California-based company employs 63 scientists, engineers, researchers, technicians and chefs at its 30,000-square-foot lab. It also has manufacturing facilities in Columbia, Missouri.

Renaissance Capital, which has researched the company, says investors will likely tolerate the losses because the business is growing so quickly. Beyond Meat’s net revenue was $87.9 million last year, 170% higher than 2017.

In documents filed with the U.S. Securities and Exchange Commission, Beyond Meat says it will invest $40 million to $50 million in current and new manufacturing facilities and spend $50 million to $60 million on product development and sales. The rest will be used to pay down debt and fund operations.