As Long Angeles crime spirals out of control, even some of the city’s wealthiest residents have flocked to Beverly Hills’ only gun store to buy firearms to protect themselves and their belongings.

Beverly Hills Guns first opened by appointment only in July 2020, and has seen upscale residents from Santa Monica to the Hollywood Hills increasingly in a panic following some high-profile smash and grabs and violent home invasions in recent weeks, Los Angeles Magazine reports.

Many are self-proclaimed progressives who’ve never even held a gun before, but who’ve been so spooked by soaring crime in the famously wealthy enclave that they’ve decided to arm themselves.

Some have also discussed more elaborate security measures, such as armored cars, safe rooms and bulletproof glass inside their homes, after some celebrities, including a star of The Real Housewives of Beverly Hills and a BET host were stalked by robbers into their homes.

Jacqueline Avant, 81, a philanthropist and the wife of music legend Clarence Avant, was also killed in a home invasion robbery and shooting earlier this month.

‘Everyone has a general sense of constant fear, which is very sad,’ said Beverly Hills Guns owner Russell Stuart. ‘We’re used to this being like Mayberry.’ He was referring to the peaceful fictional town from The Andy Griffith Show and Mayberry RFD.

But over the past year, Hollywood’s total violent crime rate increased 25 percent with its homicide rate doubling, robberies up 41.6 percent and shootings up 54.2 percent over last year, Los Angeles Police Department shows.

That is higher than the crime rate in the rest of the city, which saw homicides climb 12 percent over last year, robberies up 5.3 percent and shootings up 14.8 percent.

‘Beverly Hills is definitely a target,’ said David Perez, a security expert who previously worked security in the Clinton White House and at the Pentagon.

‘We’re telling clients “Hey don’t go out with flashy jewelry. Try to keep a low profile. Instead of driving the Bentley maybe just take the SUV.”‘ 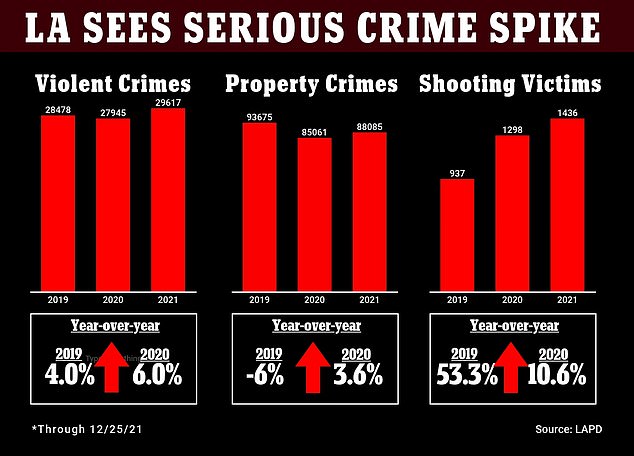 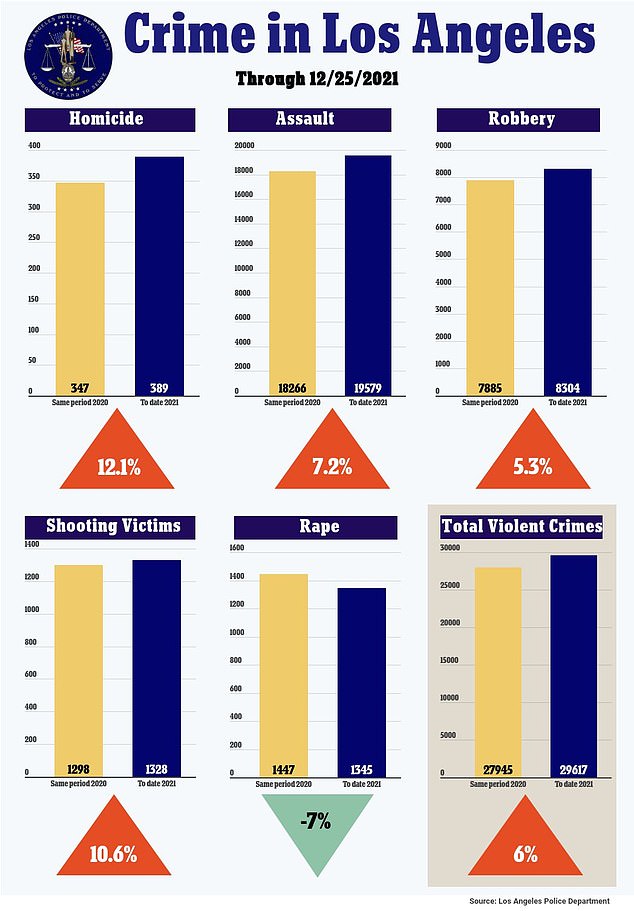 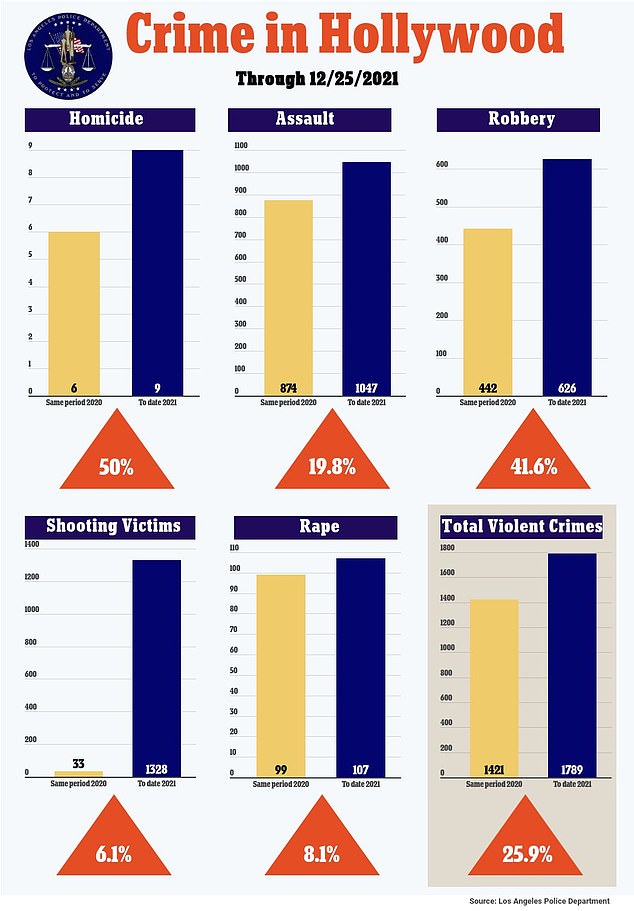 The city’s crime spike dates back to widespread looting following Black Lives Matter protests on Rodeo Drive, that left some high-end stores with broken windows, according to the LA Magazine.

Those smash-and-grab lootings continued again this year, with the LAPD arresting 14 suspects alleged to have been involved in 11 recent smash-and-grab robberies at stores last month, where nearly $340,000 worth of merchandise was stolen in strikes on an LA Nordstrom, a Lululemon in Studio City, a Fairfax district store, and a CVS pharmacy in South LA last month.

A $500,000 Richard Mille watch was also stolen at gunpoint from a diner at the Il Pastaio restaurant last March, and on December 1 of this year, Jacqueline Avant was shot and killed in her Trousdale Estate home during a home invasion.

Aariel Maynor, 29, of Los Angeles is accused of killing the beloved philanthropist and attempting to kill her security guard while allegedly robbing her home on December 1. Avant was brought to a local hospital following the home invasion, where she succumbed to her wounds.

Following the announcement of her death, Oprah Winfrey tweeted: ‘The fact that this has happened, her being shot and killed in her own home, after giving, sharing and caring for 81 years has shaken the laws of the universe. The world is upside down.’

Maynor was later charged with one count each of murder, attempted murder and being a convicted felon using a firearm.

He was also charged with two counts of residential burglary with a person present.

He has pleaded not guilty to the murder charge. 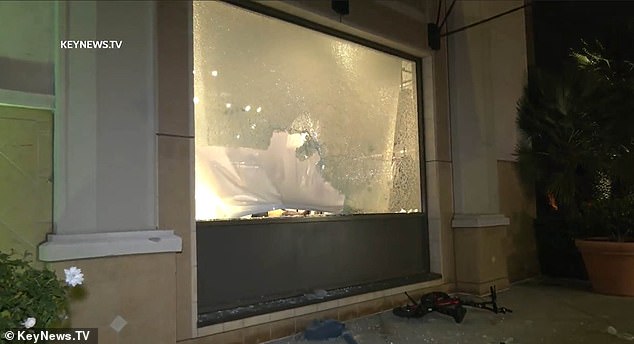 Los Angeles police say at least 20 people used sledgehammers to break the glass at a Nordstrom on November 22 and ransack its shelves before fleeing. Fourteen suspects were arrested last week in connection to the brazen heist, but have since been released 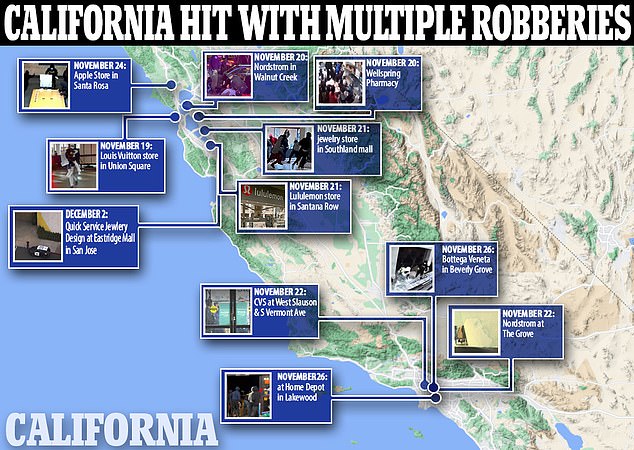 More recently, a man who was simply taking out his garbage was attacked on Thursday night, when multiple suspects broke into his home in Studio City and ransacked the place at around 7.30pm on Thursday.

LA police said four or five suspects confronted the man on Alta View Drive and assaulted him, leading him back into his house at gunpoint.

There, police say, they zip-tied the man’s disabled son and his two caregivers as they ransacked the home before fleeing through the back door.

The victim was taken to a hospital for non life threatening injuries, with cops saying they didn’t believe the terrifying incident was the latest so-called ‘follow home’ robbery.

It remained unclear as of Friday what was stolen, as the suspects remained on the loose. They are described as four males who fled in Hyundai vehicles.

‘We’ve lived here for 35 years and never had any kind of police activity like this,’ neighbor Michael Thatcher told FOX News. 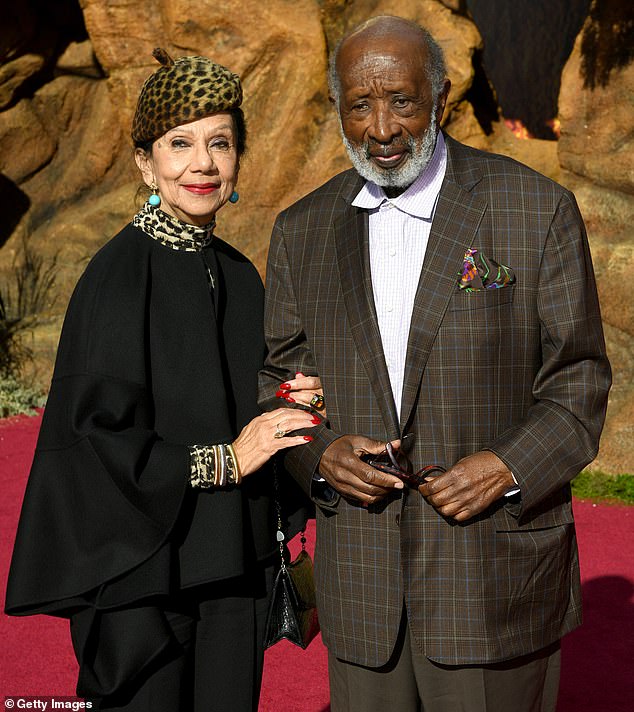 Jacqueline Avant, left, a philanthropist and the wife of musician Clarence Avant, was killed in her home on December 1 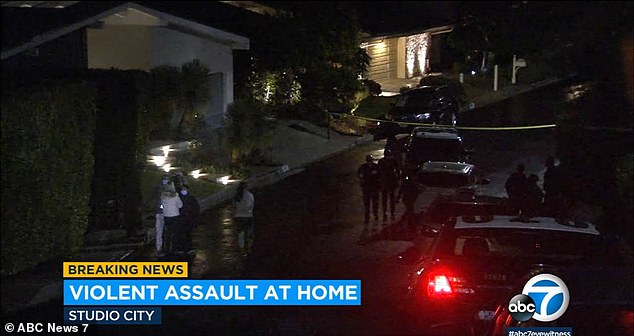 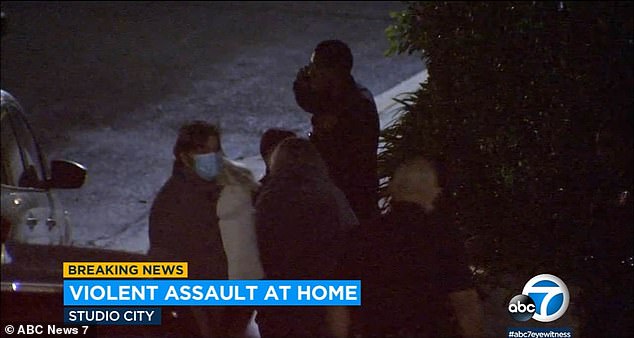 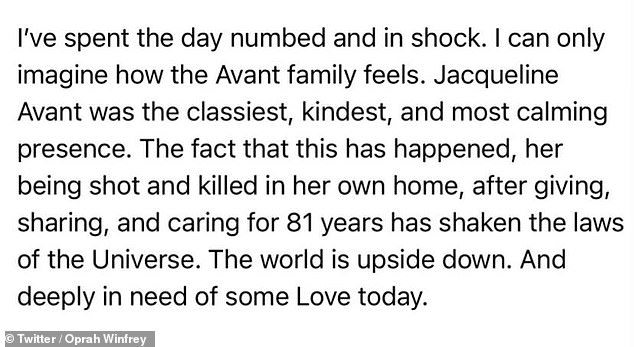 Now, residents are taking matters into their own hands, with a number of WhatsApp neighborhood groups agreeing to collaborate in the event of civil unrest.

‘They designate people to block the streets with private cars and surveil the streets,’ Alan Nissel, an assistant professor of law at Pepperdine University told LA Mag.

He noted that even some of his most progressive colleagues are deciding to get guns – including many who ‘never held a weapon, never considered holding a weapon, but now feel it would be irresponsible not to.’

Meanwhile, Beverly Hills officials have hired two private security firms to patrol neighborhoods alongside the police, and in Los Angeles, city officials voted in March to boost police funding by $36 million, after voting last year to slash $150 million from the budget. 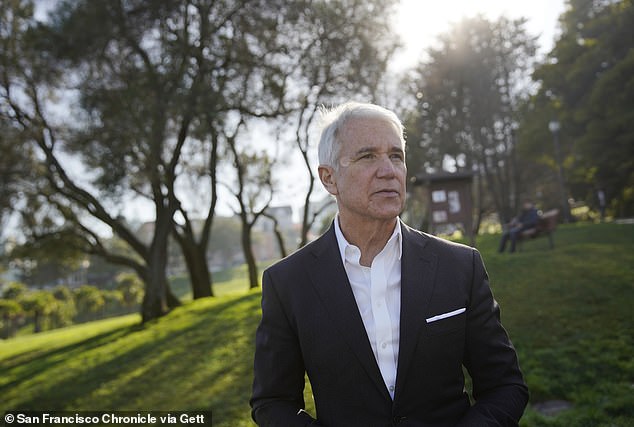 Woke District Attorney George Gascon has also faced rampant criticism since assuming office last year over his  progressive policies – such as allowing suspects to go free as they await their day in court.

Gascon, one of many ‘woke’ DAs bankrolled by billionaire Democrat donor George Soros, has survived one recall effort and faces another that was launched Monday after he was accused of being soft on crime.

The union head’s comments come as organized groups of thieves continue to terrorize cities like Los Angeles and San Francisco, brazenly looting retail stores for thousands of dollars-worth of goods, often in front of customers and staff.

The LAPD arrested 14 suspects alleged to have been involved in the smash-and-grab robberies, but due to city’s zero-bail policies, the suspects were all released within hours of being handcuffed and are currently walking the streets while they wait for their cases to go to court.

‘If you look at the 14 people arrested, they could have been charged, there could have been bail amounts set, but none of that was done because the district attorney refuses to take a leadership position on this issue,’ Siddall told Fox, slamming Gascon office’s do-nothing approach to the rampant crime wave currently afflicting cities all across the Golden State.

In a statement sent to the outlet, Gascon’s office said that it was looking into the suspects’ cases with LAPD officials and ‘will hold those responsible accountable.’ 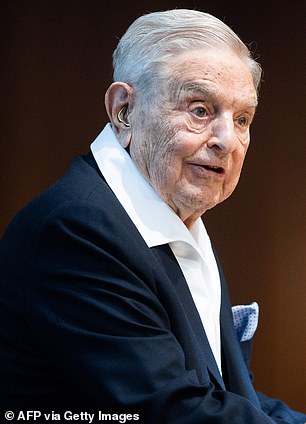 ‘Our Organized Crime and Cyber Crime Divisions are involved because often many of these cases can be interconnected and part of these crimes happens online,’ an adviser to the prosecutor, Alex Bastian, asserted in the statement.

‘These brazen acts hurt all of us; retailers, employees and customers alike. We will hold those responsible accountable.’

Many attribute Gascon’s more liberal policies to his connection to  billionaire Democrat donor George Soros, who seeks to overhaul the criminal justice system by giving millions to a network of woke prosecutors in Democratic races.

Gascon raked in more than $2.5 million last year from the Hungarian-American financier, who boasts a reported net worth of $8.6 billion and is most known for giving to Presidents Bill Clinton and Barack Obama.

Soros has also donated to the campaign of Philadelphia District Attorney Larry Krasner to the tune of $1.7 million.

In May, Gascon’s opponents organized a recall effort to oust him from office.

However, despite garnering more than 200,000 signatures from LA citizens in a matter of months, the campaign fell short in October, failing to amass the needed 580,000 LA County voters needed to remove Gascon.

The recent rash of ‘flash mob’-style robberies have only made matters worse for Gascon, who is now facing a second recall effort.