Best friends Joey King and Sabrina Carpenter went for a hike in the Hollywood Hills on Sunday.

The two starlets – both 23 years old – were spotted enjoying each other’s company and sharing a laugh while enjoying the pleasant California weather in January.

The songstress and the actress took a white and brown male hound that belongs to Joey’s new fiancé Steven Piet for a walk up a popular hiking trail near the Hollywood sign.

BFF hike with the pooch: Singer Sabrina Carpenter (left) and Bullet Train villain Joey King (holding the leash) were spotted as they went on a hike in the Hollywood Hills on Sunday

The Kissing Booth actress – who is currently wearing her hair in a light auburn color – donned a casual and comfortable look perfectly appropriate for their hike as she held on to a retractable dog leash.

She wore a pair of white-framed sunglasses hooked onto the neckline of a long-sleeved green sweatshirt and a pair of long black leggings.

The Bullet Train star sported a pair of black and white running shoes and wore a small grey bag crossbody. 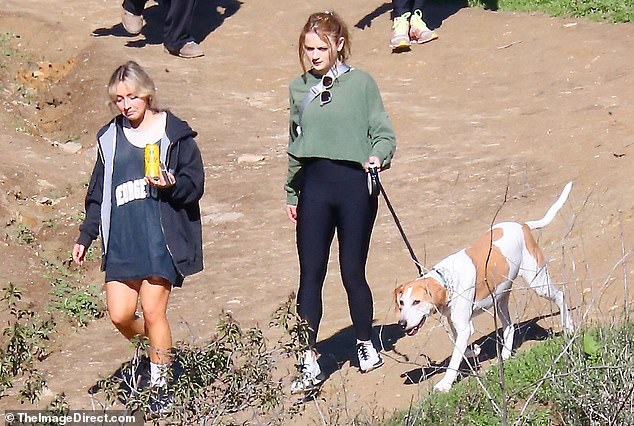 Rising stars: The Kissing Booth actress donned comfortable and athletic outfit appropriate for hiking up and down a mountain, and wore a small grey bag crossbody as she kept the precious pooch nearby 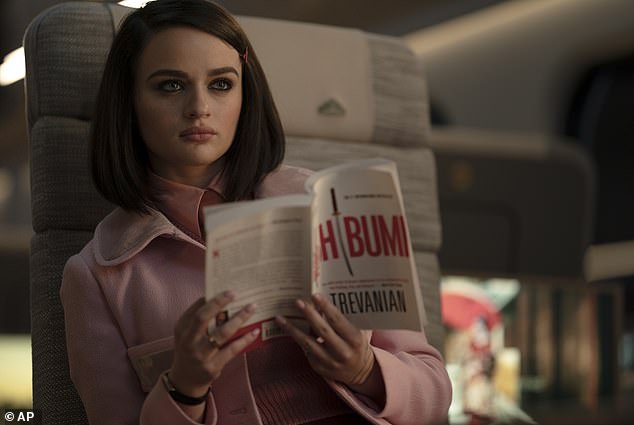 Villain babe: Joey with dark hair in a scene from Bullet Train with Brad Pitt

Earlier this week, Joey showed off her engagement ring when she stepped out with her director boyfriend to walk the same dog on Monday in Los Angeles.

Nearly a year ago, Joey and Steven announced their engagement on social media with photos documenting the proposal on their third anniversary of dating.

‘I never knew happiness could be so powerful that it can take the air from your lungs, overwhelming every part of you that you can’t help but feel your eyes well from the undeniable joy,’ she wrote in her post. 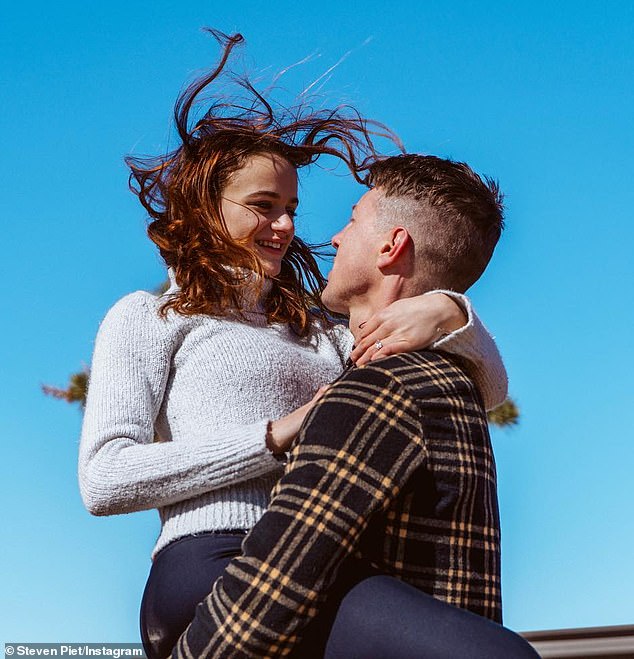 Lovebirds: Nearly a year ago, they announced their engagement on social media with photos documenting the proposal on their third anniversary of dating 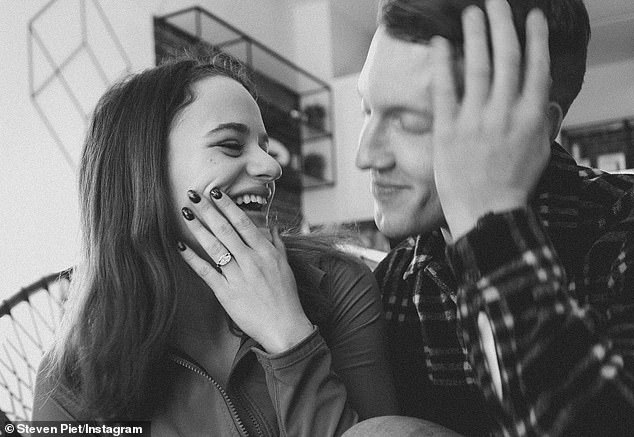 Her fiancé: Steven wrote on his Instagram, ‘The weather was less than perfect. Cold. Windy. Perfectly imperfect to ask my best friend to spend a lifetime together.’ 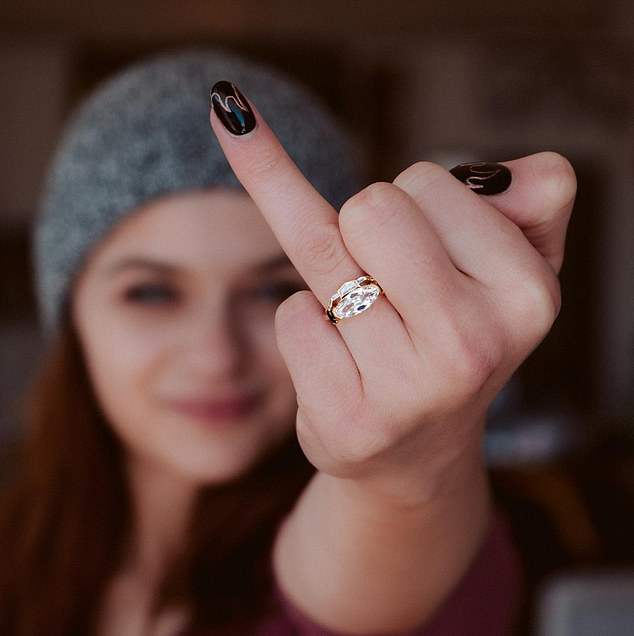 She gushed: ‘The date was 2/2/22 when you asked me to marry you and made me the luckiest lady alive. I love you more than an Instagram caption could ever do justice. Hanging out with you forever sounds like a real dream, so let’s do it’

For their afternoon hike, Sabrina wore her long blonde locks back in a braid with her bangs down in front.

Carpenter wore an oversized blue Georgetown jersey under a black jacket and showed off her toned legs in short black tights.

Carpenter is known to some fans for her acting work in such shows as Law & Order: Special Victims Unit and Disney Channel’s Girl Meets World and films The Hate U Give and Emergency, she has also released five studio albums since 2015. 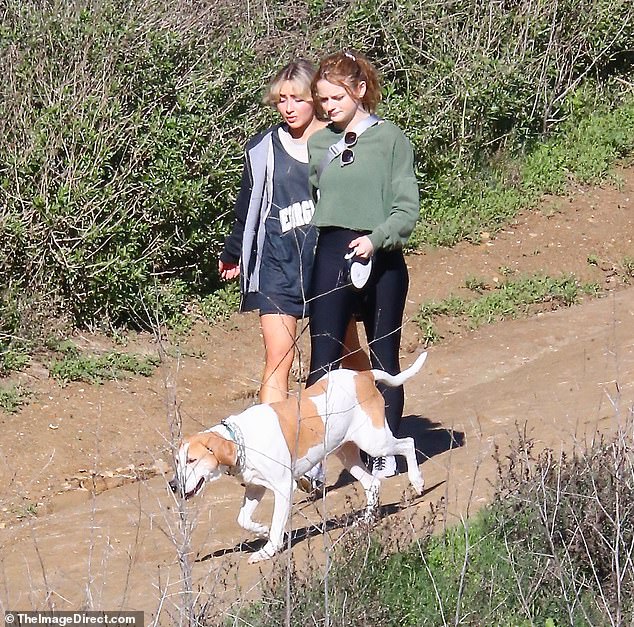 Side-by-side: During their outing, Joey wore her auburn hair back in a pony tail with long bangs in front while Sabrina wore her blonde hair down with a middle part

She has since dropped four more albums, with the most recent, Emails I Can’t Send, coming this past July, which has spawned four singles: Skinny Dipping, Fast Times, Vicious and Because I Liked A Boy.

Carpenter kicked off the Emails I Can’t Send Tour in September, which is in support of her new album.

In November, the bombshell singer was among the list of stars who took the stage as a presenter during the 2022 American Music Awards during the evening that saw Taylor Swift make a sweep and win all six awards for which she was nominated, including the top prize of Artist Of The Year. 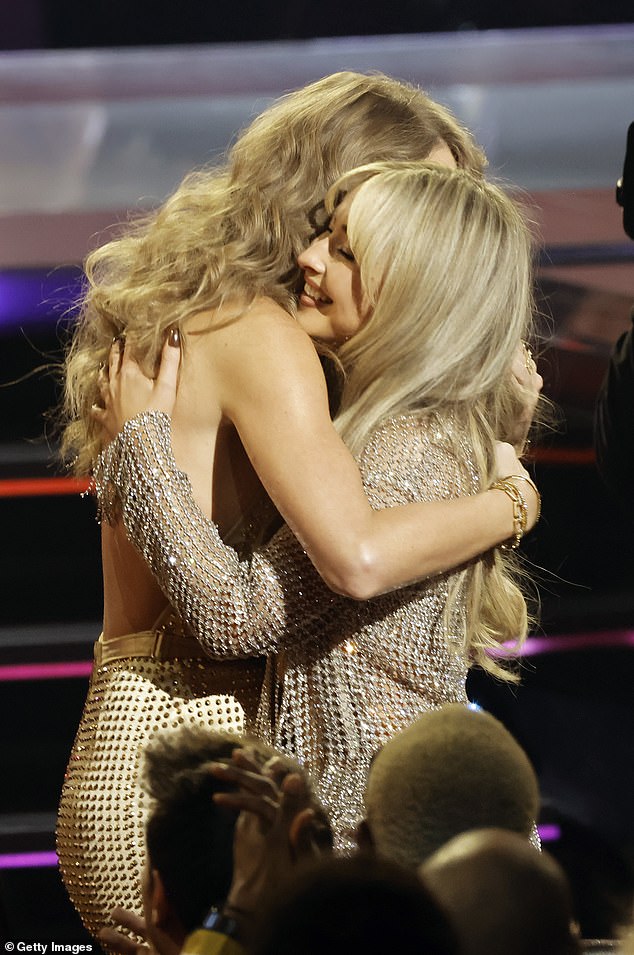 Presenter: Carpenter also served as one of the presenters, which resulted in one of Taylor Swift’s six wins; they are seen sharing a hug as the Folklore star came up to claim her trophy