While most establishment Democrats are calling out President Biden for leaving behind Americans who are not benefiting from the relief plan, more progressive members are saying that the plan isn’t enough to make a dent in the student loan crisis.

‘Well, the truth is, in a sense that criticism is correct,’ Sanders told ABC’s This Week program on Sunday morning.

Biden announced Wednesday forgiveness uo to $10,000 for borrowers making less than $125,000 individually or $250,000 jointly. Those with Pell Grants are eligible to have $20,000 in federal student loan debt canceled in Biden’s new plan.

Estimates claim the relief will cost American taxpayers up to $600 billion over the next decade and a separate analysis notes that individuals – even those who did not benefit from the forgiveness – will end up paying more than $2,000 to pay off the debt.

The Penn Wharton Budget Model at the University of Pennsylvania’s business school found in a report last week that the majority of relief would go towards borrowers who are within the top 60 percent of earners.

‘The answer is maybe, just maybe, we want to have a government that works for all working people and not just the people on top,’ Sanders said on Sunday.

‘The answer is, not to do what Republicans want to do,’ the progressive senator added. ”Oh, it’s unfair to this person because we’re helping that person.’ The answer is maybe to create a government which works for all people and not just the wealthy campaign contributors.’

Republicans’ biggest criticism of the plan is that it is not fair for Americans who did not go to college or who worked hard and planned accordingly to be able to pay for college or pay off their debts in a timely manner.

The GOP claims these Americans are being punished for their sound financial planning.

Some Democrats are also hopping on board with this view.

Democratic Representative Tim Ryan, who is running for the open Senate seat in Ohio, said in a statement last week that Biden’s relief plan ‘sends the wrong message to the millions of Ohioans without a degree working just as hard to make ends meet.’ 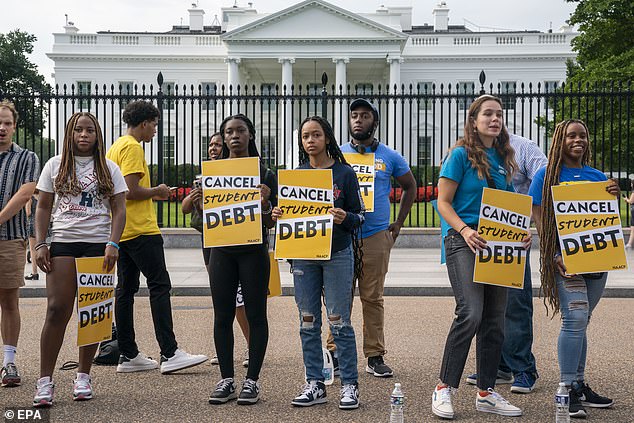 Biden announced last week his administration is canceling between $10,000-$20,000 in federal student loans for borrowers making less than $125,000. Progressives immediately claimed it didn’t go far enough and establishment Democrats say it is unfair to those who worked hard to repay their loans or did not go to college 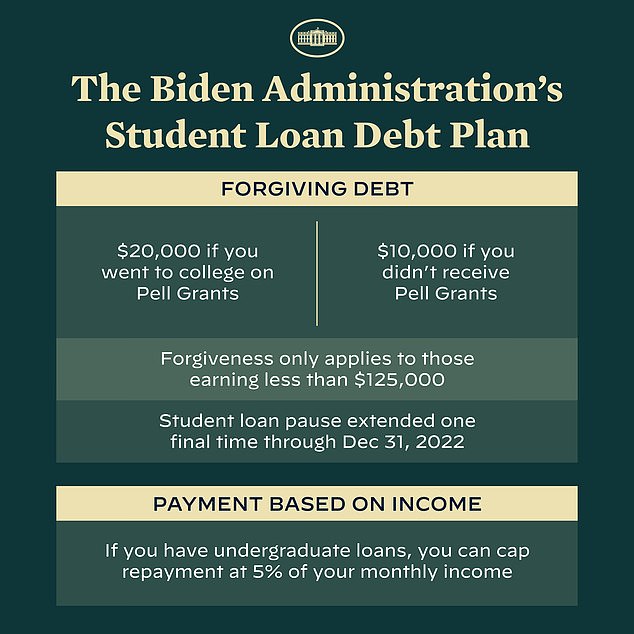 Biden’s plan came in conjunction with the fifth and final extension of the federal student loan repayment moratorium, which will end in January 2023

The answer to the debt crisis, Sanders claims, is ‘not to deny help to people who cannot deal with these horrendous student debts.’

Maine Representative Jared Golden said in a statement on the forgiveness: ‘This decision by the president is out of touch with what the majority of the American people want from the White House, which is leadership to address the most immediate challenges the country is facing.’

One of the most vulnerable Democrats in the House, Representative Chris Pappas of New Hampshire, also criticized Biden’s decision.

He said the move ‘sidesteps’ Congress and insisted it would do little to fix the core issue of ‘the affordability of higher education.’

The announcement for forgiveness came at the same time Biden announced the fifth and final extension for the federal student loan repayment moratorium, which was previously set to end on August 31, 2022.

The extension, the administration noted, is the last of the pandemic – and student loan payments will resume in January 2023.

Outstanding loans and interest accruement was put on hold in March 2020 at the onset of the coronavirus pandemic.