EXPRESS INFORMER > News & Politics > Beloved Border Collie, 14, had to be put to sleep in the boot of the family’s car

A family-of-four were left distraught after their beloved Border Collie had to be put to sleep in a car boot, after the vet was unable to visit their home because of social distancing measures.

Fourteen-year-old Border Collie Shearer, from Old Isleworth, west London, was left struggling to eat as a result of a serious illness known as Squamous Cell Carcinoma, and the family were advised he would need to be euthanised during the lockdown.

Shearer was terrified of visiting the vet so his owners knew they couldn’t take him to a clinic because he would feel anxious in his final moments.

They decided to have him put to sleep in the comfort of their sitting room, however the vet was unable to enter their house due the coronavirus pandemic, and was forced to perform the procedure in their car – calling it ‘a low point in his career’.

The family had chosen for him to take his last breath at home in his favourite spot behind the sofa next to the bookcase named ‘collie corner’.

However, social distancing regulations meant that their vet, Dr Scott Miller, could not come into their house or garden.

Two weeks into lockdown, Shearer’s family made the painful decision to take him to Dr Scott’s practice where he was sadly put down in the boot of the family’s car parked nearby in Old Isleworth on April 2.

Dr Miller, who was dressed in full PPE for the procedure, described it as ‘heartbreaking to perform’ and said it was a ‘real low point’ in his 23-year career. 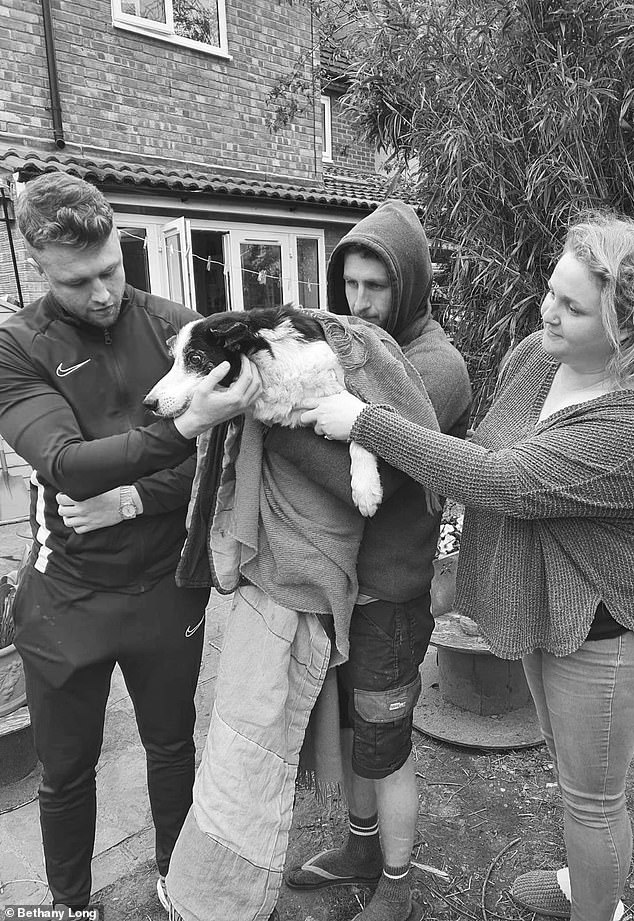 Shearer in his family’s garden before his last trip to the vet to be put down. Pictured: Brothers Joshua, 26, Samuel, 24, and Bethany, 28

Dog behaviourist and owner Bethany Long, 28, said: ‘We always knew we wanted Shearer to take his last breath at home, in his favourite space behind the sofa tucked into ‘collie corner’ next to the bookcase.

‘This was his place of safety and was where he spent every day of his life from eight weeks to nearly 15 years.

‘He never went into kennels and came on every family holiday. We never spent a night away from him apart from nights he had surgery.’ 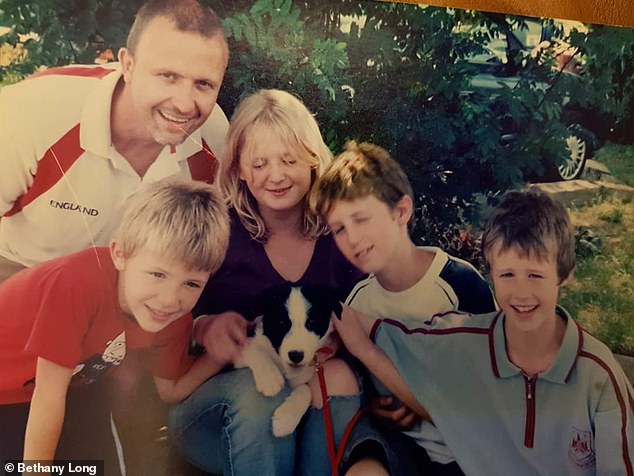 From left to right: Owners Mark, Ben, Bethany, Joshua and Samuel on the day they bought Shearer home on August 17 2005

Bethany continued: ‘He hated the vets. Not the vets themselves, but the environment.

‘He would stand in the vet room with his nose pressed into the gap where the door meets the frame as if he was sniffing his freedom and would have to be muzzled. He hated any formal handling, even from us.’

Bethany said Shearer’s breathing became progressively worse in his final days and the family made the painful decision to have him put to sleep.

‘When the day came that we had to say goodbye, we were desperate to have a home visit from the vet but due to Covid-19 they were not allowed to enter our home or even our garden,’ she said. 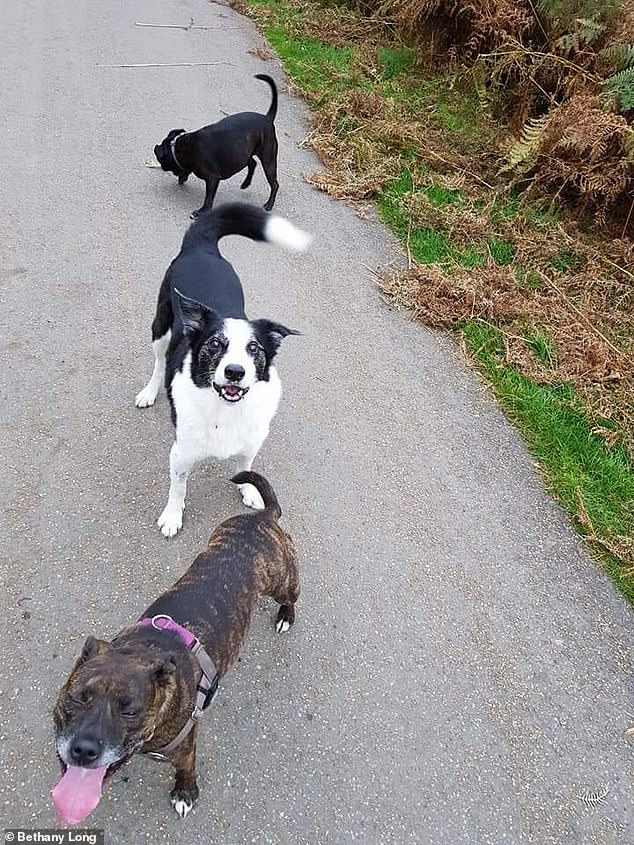 Shearer on a walk with his two Staffordshire Bull Terrier sisters Bonny, 10, and Roxy, six, in October 2019

‘Rightly or wrongly, we tried to wait it out together until he passed. This became too distressing as his breathing became laboured and we knew we had to take him in.’

However coronavirus restrictions meant that the whole family could not accompany Shearer into the clinic and they couldn’t bear to see him pass in the place he hated most.

‘So we had to have our beloved dog put to sleep in the boot of the car on a high street,’ Bethany said.

‘In the moments of pain and grief we were not thinking about others watching, but it must have been hard if others witnessed those very intimate moments.’

Dr Miller said some family members were unable to contain their grief and had to sit in the car for privacy.

Bethany said: ‘It didn’t feel like the final farewell that our boy deserved. But it meant that he passed surrounded by the love of his family.’ 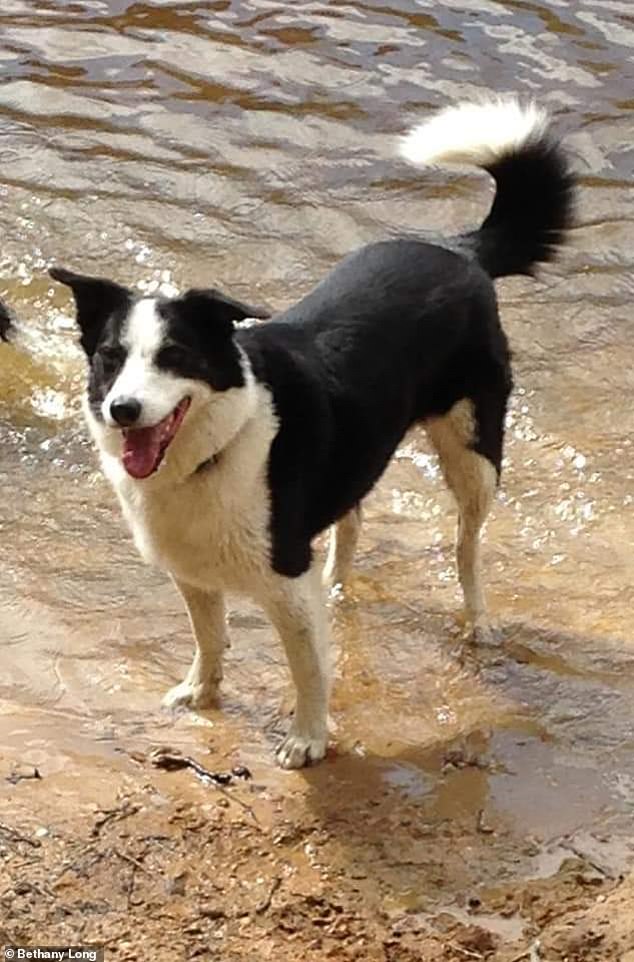 Bethany said: ‘Shearer loved catching kicked leaves, water, snow… he would even try and catch the waves at the beach’

Bethany explained how she was so thankful to the veterinary nurses but not being able to hug them was upsetting.

‘One of the terribly hard things was not being able to hug my best friend who was the vet nurse who assisted,’ she said.

‘I know it was hard for her and Scott, who has cared for Shearer for years.

‘It was a heartbreaking day, but also made me think of those who have not even been able to kiss goodbye their loved ones.’

Dr Miller, who has been a vet for 23 years, said he has never had to conduct a pet’s euthanasia in such a public way and it was one of the most heartbreaking moments of his career. 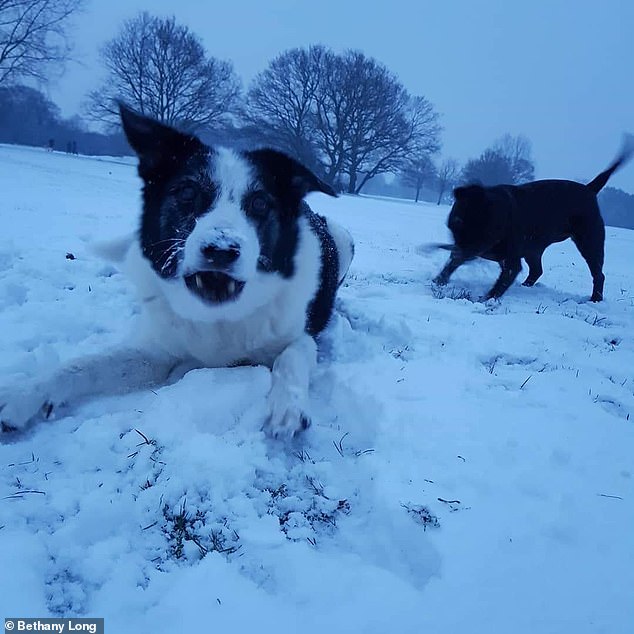 Playful Shearer in the snow with his Staffordshire Bull Terrier sister Bonny in 2010. Dr Miller described how it was ‘heartbreaking’ to see Shearer put to sleep in that environment

He explained: ‘To ensure social distancing, my nurse and I approached the boot of the car wearing full PPE and placed a catheter with the family standing at a safe distance away.

‘Then we attached a fluid bag and a long line to allow us to administer the euthanasia agent while standing at a safe distance.’

‘It was awful being so clinical and not being able to offer a hug or even a comforting smile wearing a mask.

‘The family were obviously distraught, sobbing at the loss of a beloved family pet, with members of the family needing to get into the car to have some privacy with their grief.

‘It was heartbreaking to perform and watch, a real low point in my career spanning two decades and countless euthanasias.’

Dr Miller said Sherarer has been the only pet he has euthanised in this way.

However, due to Covid-19 restrictions, vets are having to limit the number of family members sharing the final moments with their pet.

He said: ‘There have been other owners who were concerned for their safety, so did not come into the practice, leaving their pet to be euthanised with my staff and I only.’

‘Also known as Colin, Collie-flower, Giant, Slink, Shearer-boy-dog-lad, among many other names.

‘He was nearly 15 and has had aggressive tumours in his throat for a few weeks and yesterday it was clear he had had enough. He was peaceful and surrounded by love.’

She continued: ‘He was the wisest, gentlest, strongest, bravest boy and he was my first dog. My dream dog.

‘In true Long style we didn’t plan him, we saw a pen full of puppies on a farm (called The Big Sheep) whilst on a camping holiday in Devon.

‘We called him Shearer as the man who sold him to us was a geordie (which was also a potential name) as is Alan Shearer who mum loves. He is also a sheep dog and it tied in with sheep Shearer..

‘He was our protector. He loved to chase accidentally kicked stones and went through a phase where he was obsessed with pine cones. He loved catching kicked leaves, water, snow… he would even try and catch the waves at the beach.

‘He loved thunderstorms and fireworks and would go and lay outside to watch them. He was an outside boy. He was my mums walking adventure sidekick.

‘He was honestly the best dog and more than we could have asked for and was a real family boy who was truly loved. And I miss him.’

Ahead of World Veterinary Day on Saturday 26 April, the world’s largest house and pet sitting community, TrustedHousesitters.com, has launched a campaign called #ThankYouVets, asking the public to upload photos recognising the work of the vets.

Angela Laws, Community Manager for TrustedHousesitters.com said: ‘Pets give unconditional love and benefit those whose lives they touch, both physically and emotionally, especially in these times of unprecedented crisis.

‘We simply wanted to take this opportunity to say thank you to caring veterinary professionals everywhere.’