Bella Hadid was every inch the style chameleon as she hit the catwalk for Vivienne Westwood’s Paris Fashion Week show on Saturday afternoon.

Having walked the Haider Ackermann show earlier in the day, the model, 23, switched up her look once again as she slipped into a completely sheer lace bridal gown for the Autumn/ Winter 2020- 2021 showcase.

Bella channelled her inner warrior as she pulled a dagger from her brown waist belt while walking down the runway. 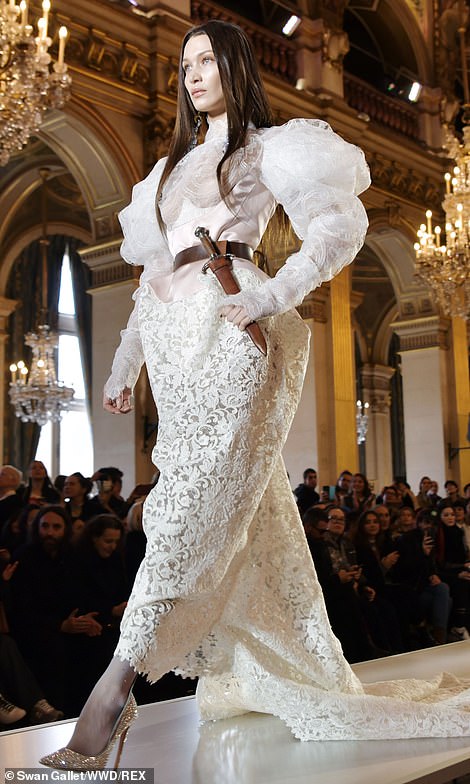 Wow: Bella Hadid was every inch the style chameleon as she hit the catwalk for Vivienne Westwood Paris Fashion Week show on Saturday afternoon

Bella brought the glamour to Vivienne Westwood’s show as she showcased the ornate dress, which featured a Victoria scalloped hemline, puff ball sleeves and exposed her cleavage.

Her waist was cinched in thanks to a satin pink corset and the belt which wound around her slender midriff.

The floor-length dress then flowed out and featured an asymmetric hemline and dramatic train which trailed behind as Bella walked down the number.

The American beauty added extra sparkle to her look with silver sparkly court shoes and wore her brunette tresses in a sleek straight centre parting. 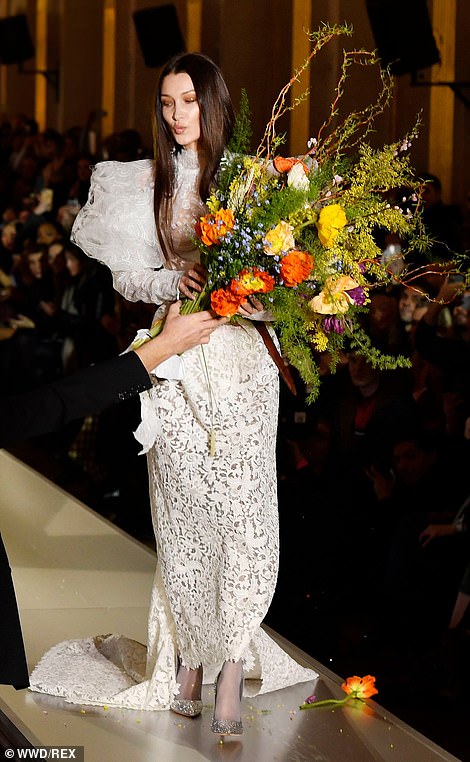 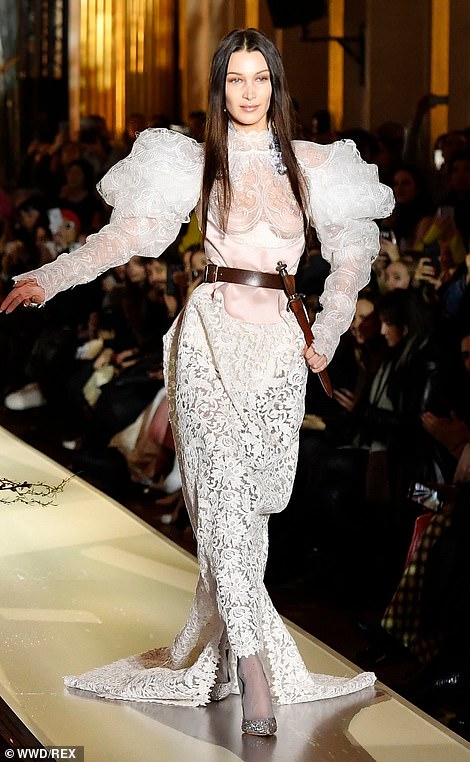 Beautiful: Bella was presented with a huge bouquet of flowers after storming the catwalk 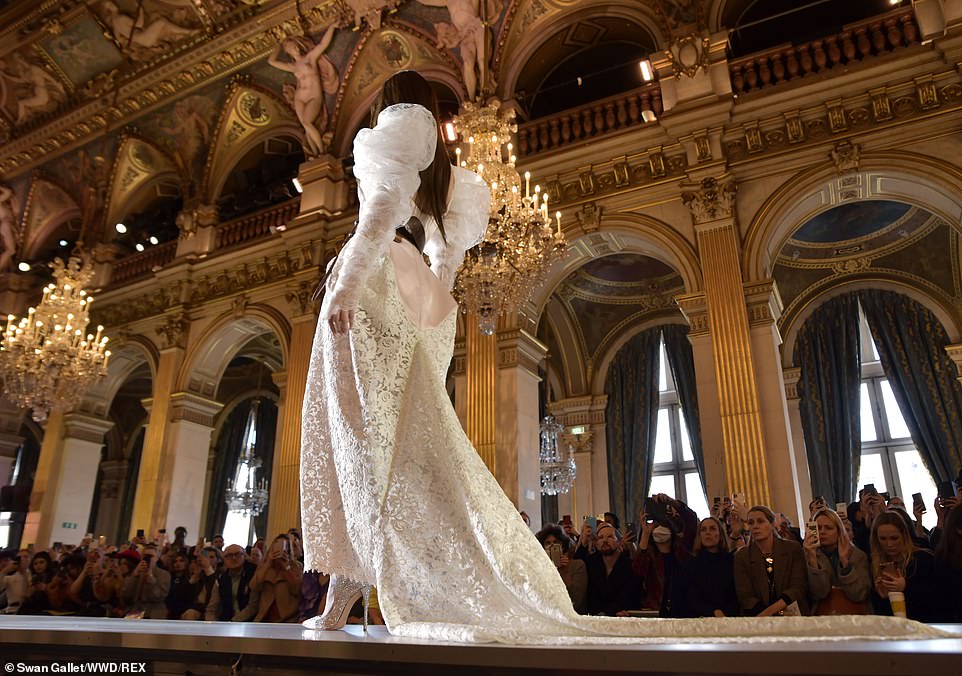 Gracing the runway: The floor-length dress flowed out and featured an asymmetric hemline and dramatic train which trailed behind as Bella walked down the number 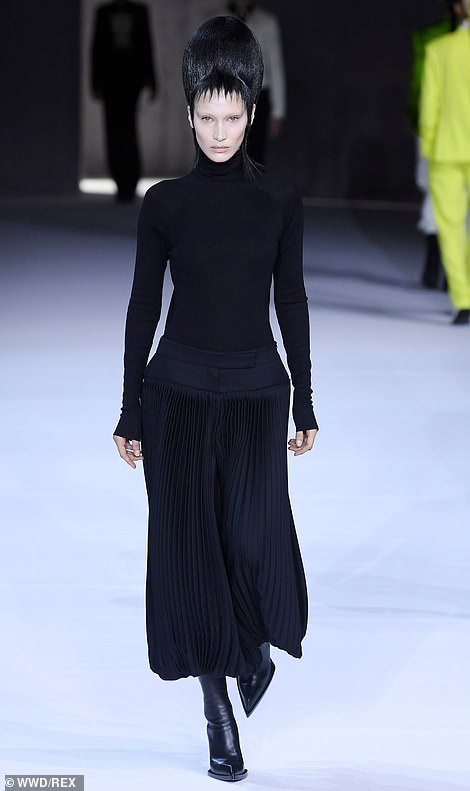 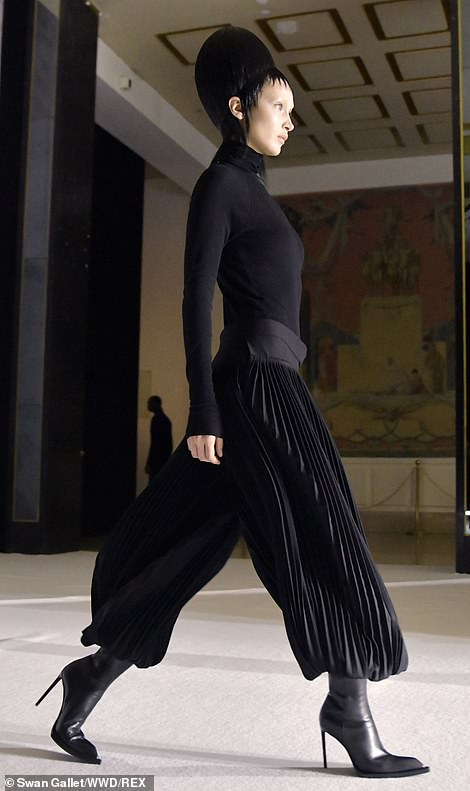 Daring: Earlier in the day, Bella sported one of her most quirkiest looks on this year’s PFW catwalk to date for Haider Ackermann’s Autumn/ Winter 2020- 2021 show

As the bride of the show, Bella was presented a huge bouquet of spring flowers but in a gesture of gallantry got down on one knee to propose with the flowers to Vivienne.

Earlier in the day, Bella sported one of her most quirkiest looks on this year’s PFW catwalk to date for Haider Ackermann’s Autumn/ Winter 2020- 2021 show.

The model, 23, looked unrecognisable as she sported an alabaster complexion, bleached eyebrows and a black bouffant wig with whispy fringe.

Bella took to the runway in a black form-fitting polo neck and satin pleated culottes.

She added a boost to her statuesque frame with pointed black heels and sported a minimal make-up look.

The model gave Marge Simpson a run for her money as she stormed down the catwalk in the beehive wig. 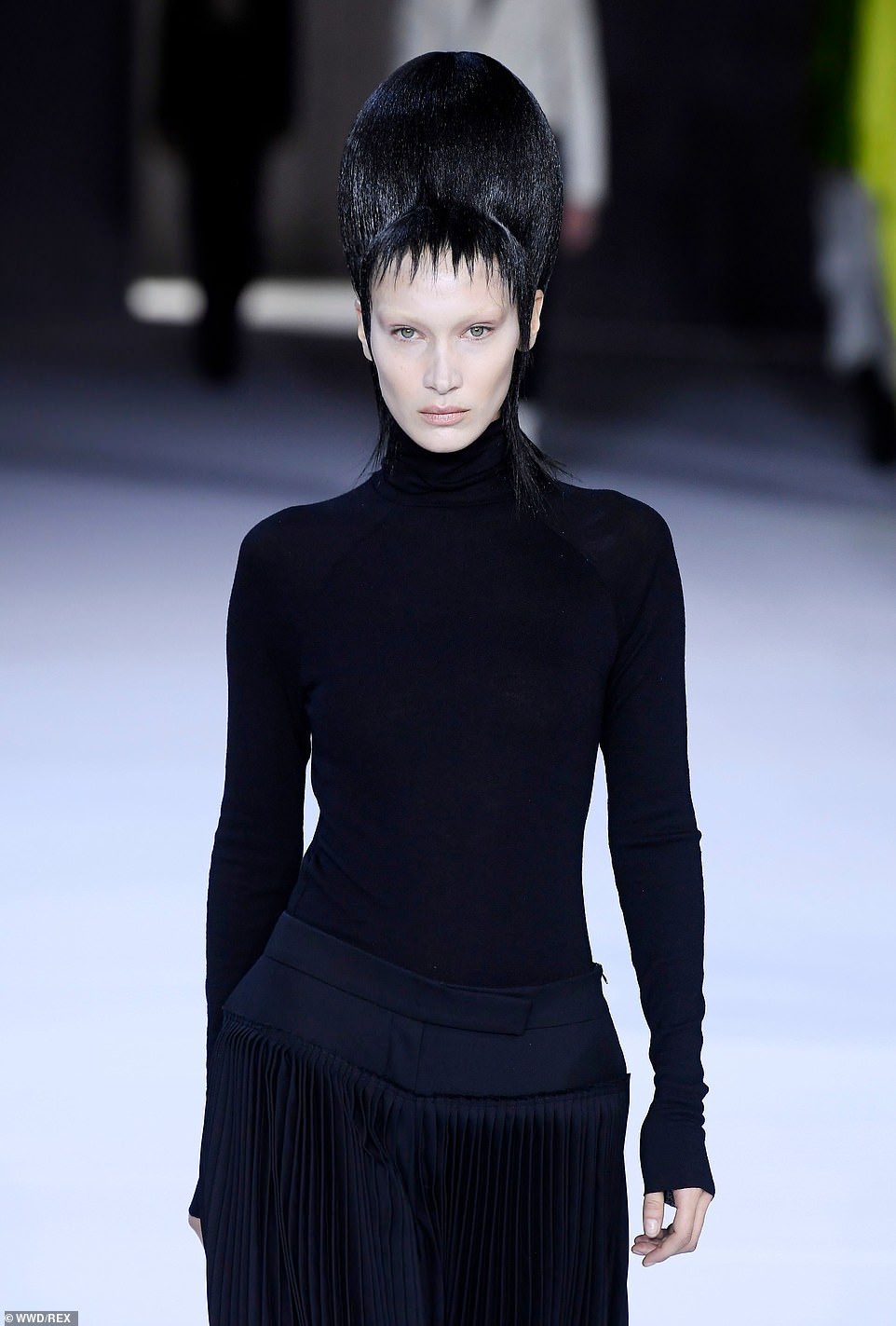 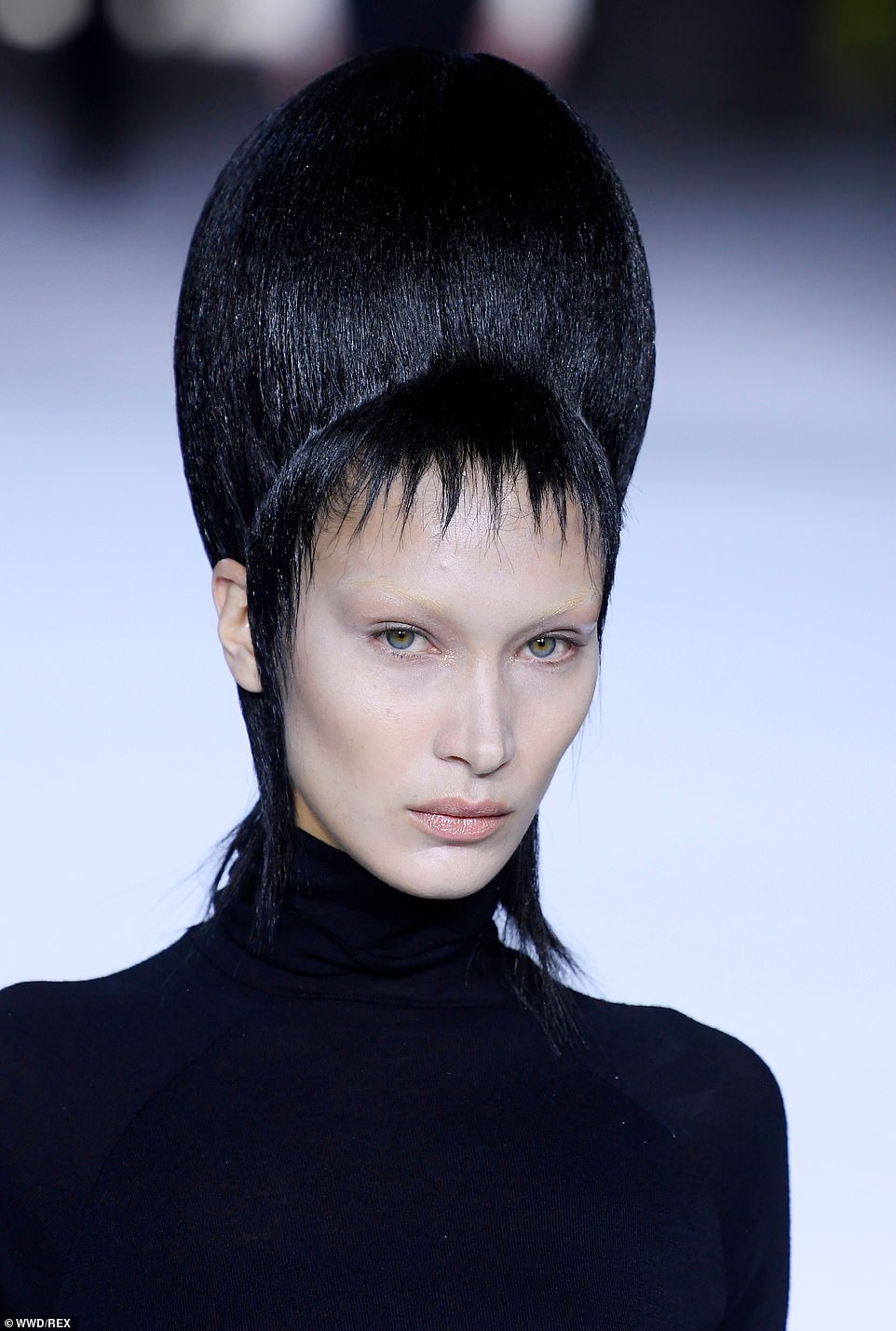 Fair: The model, 23, looked unrecognisable as she sported an alabaster complexion 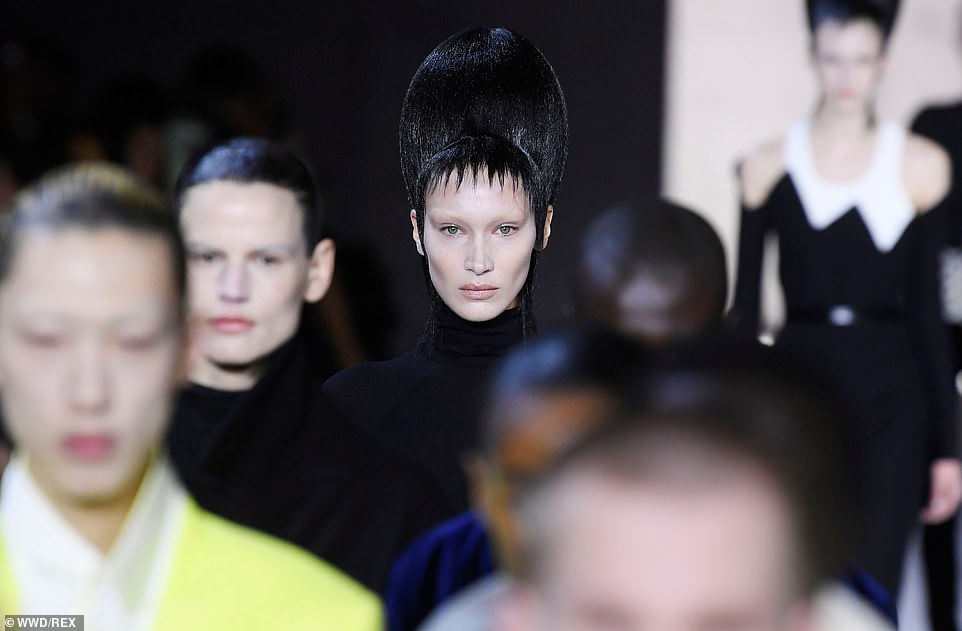 All eyes on her: The model certainly stood out for the crowd 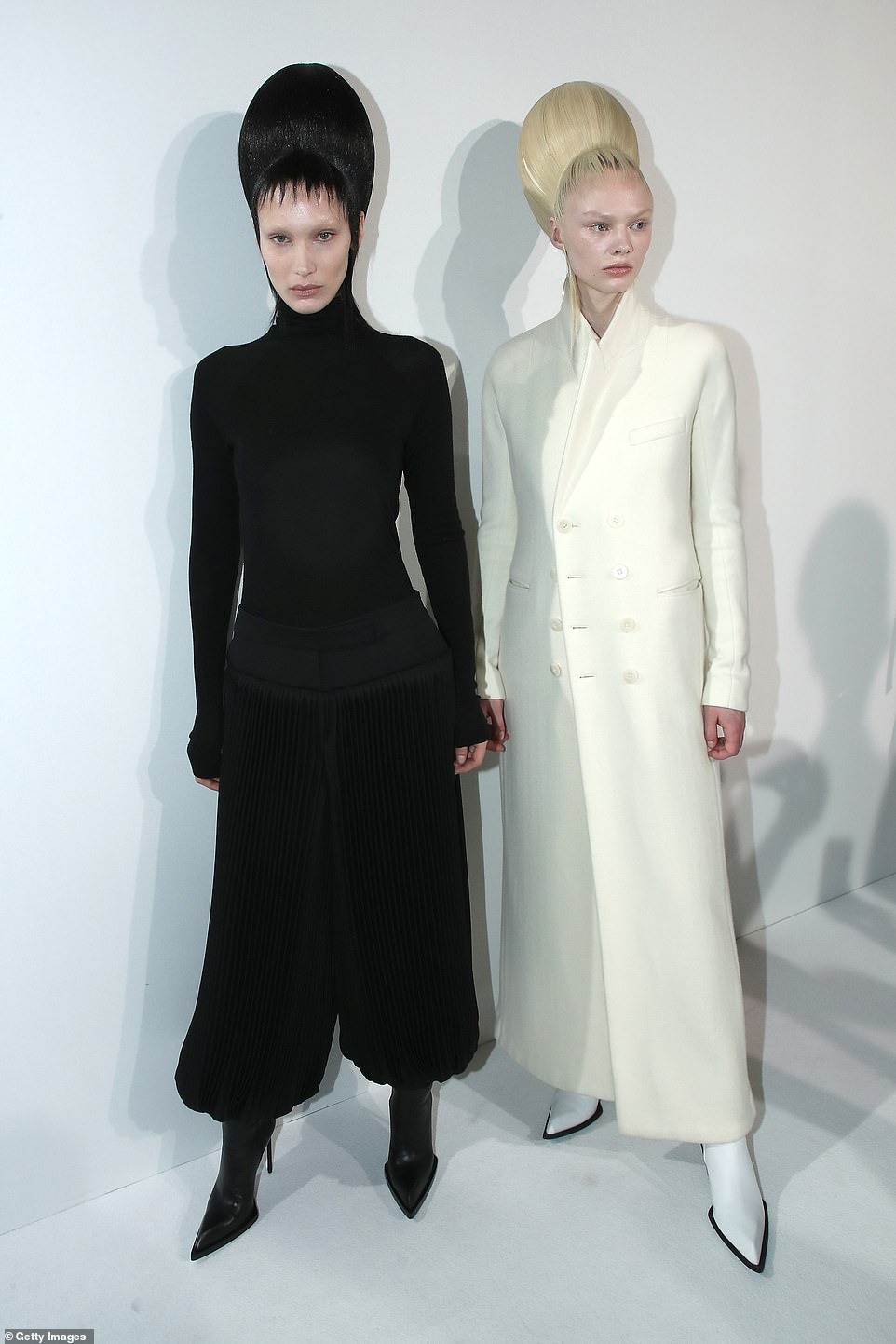 Strike a pose: Bella Hadid posed with another model who was in an all-white ensemble 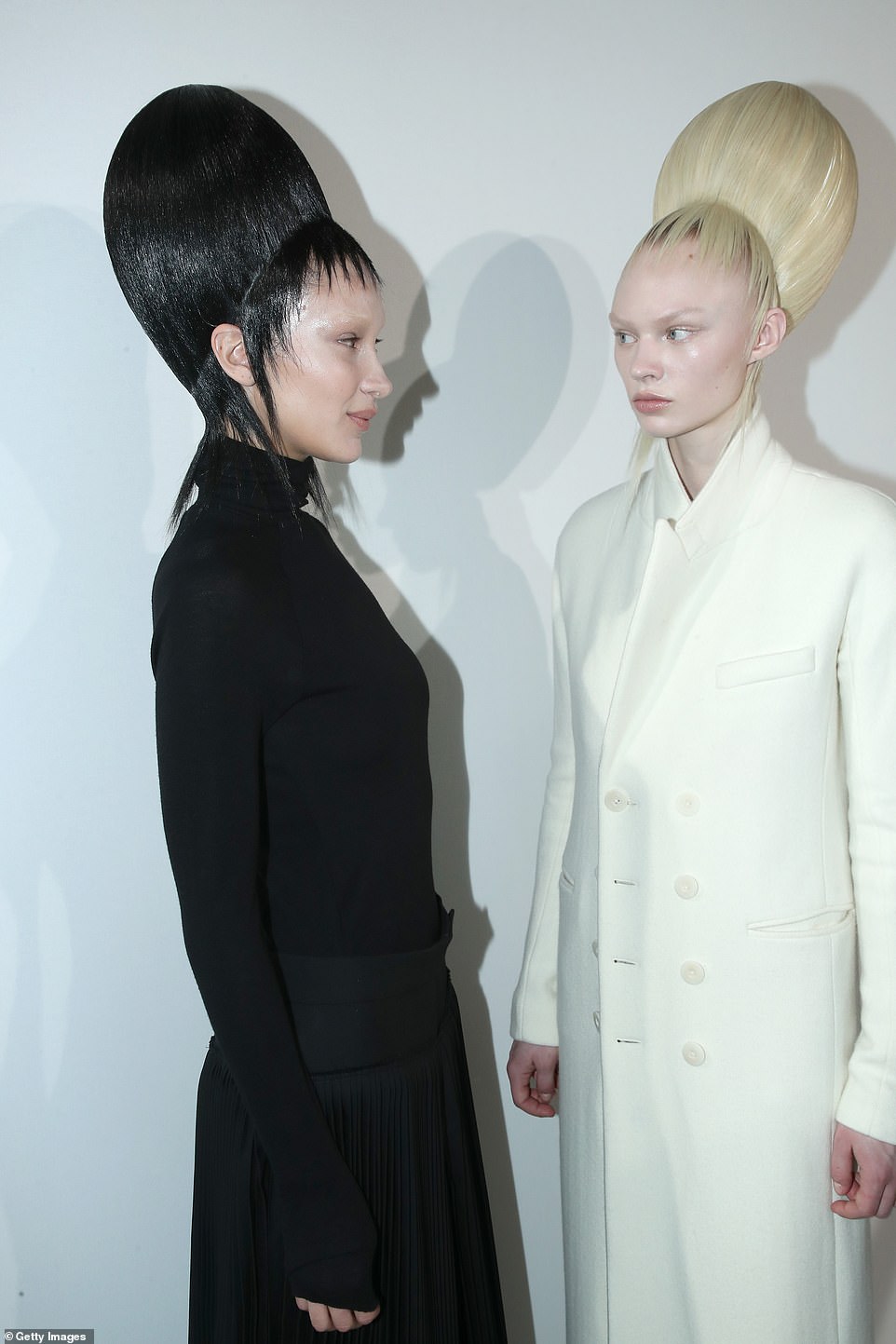 Ying and yang! Bella and another model showcased contrasting black and white looks 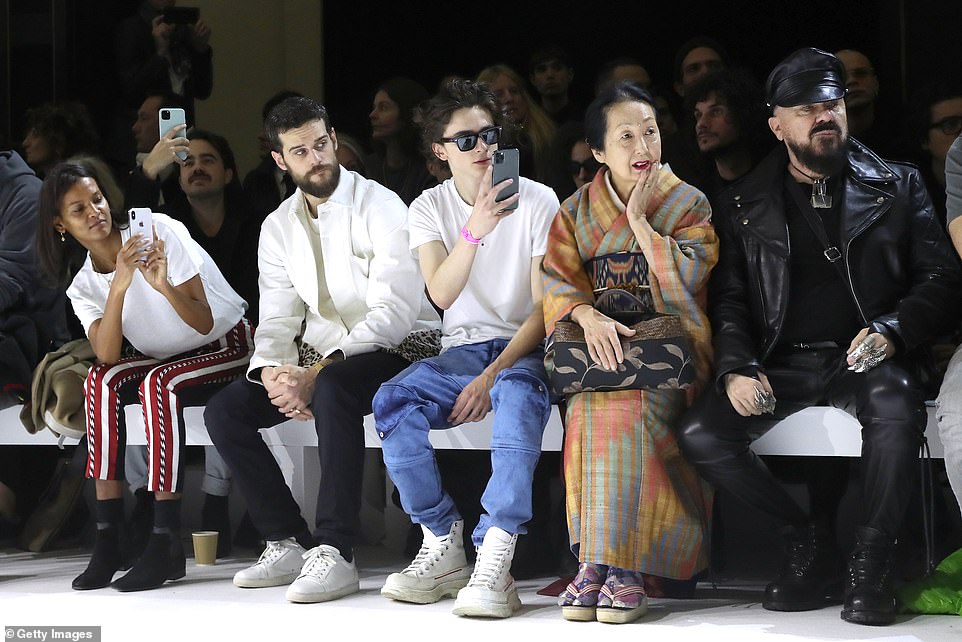 Haider Ackermann is a Colombian-born French designer of ready-to-wear fashion.

The simple cuts of his creations are often asymmetric and sewn of different materials, resolutely modern, dynamic and urban areas – and this was certainly seen during Saturday’s showcase. 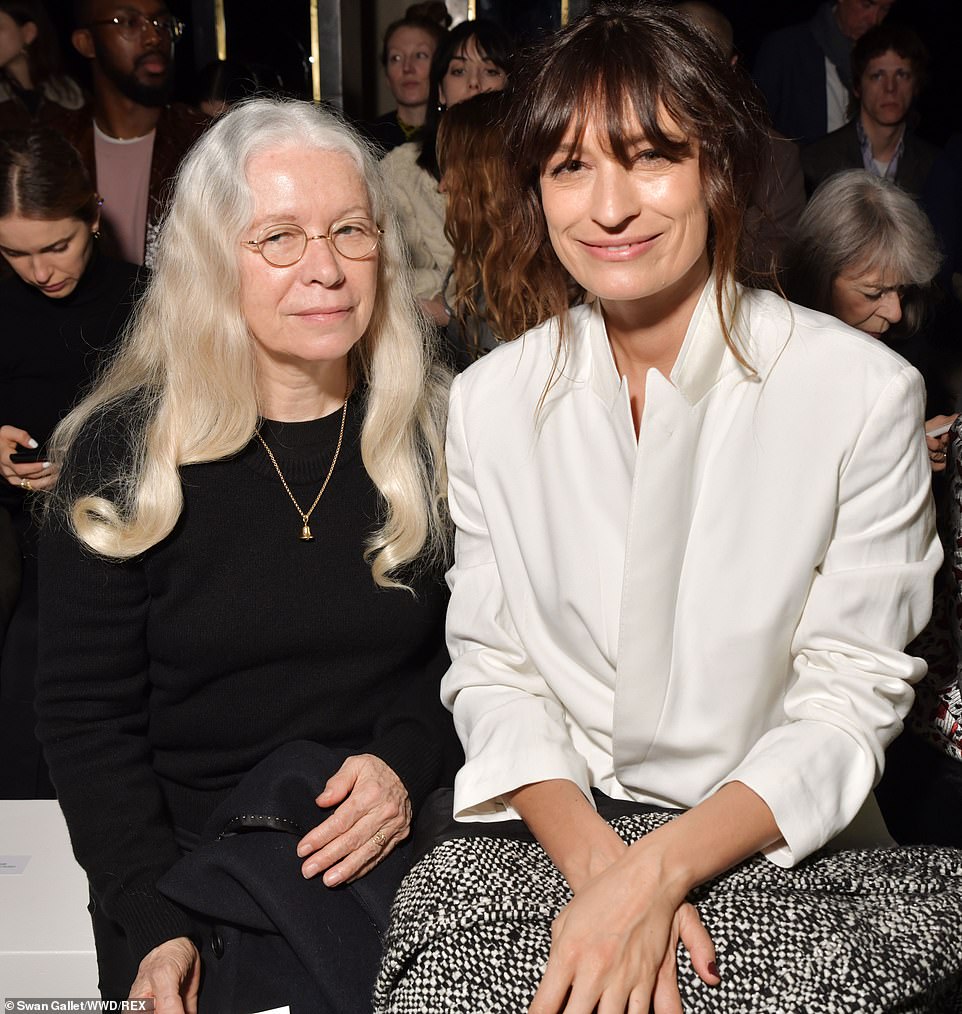 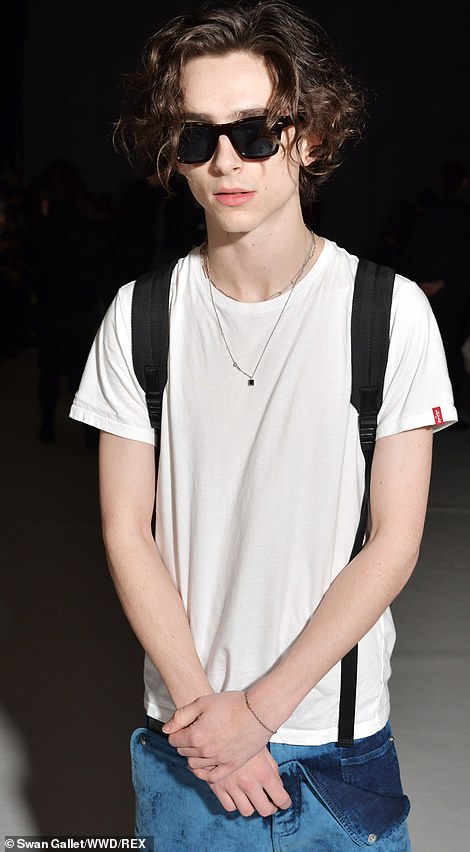 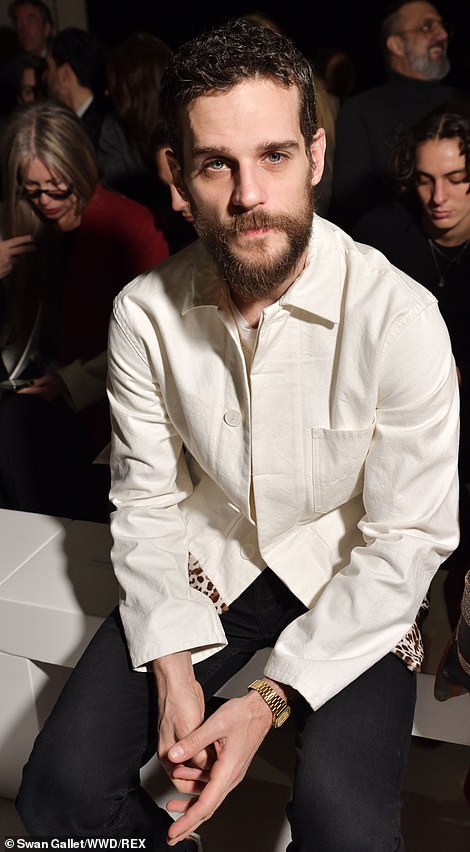 Casually-clad: Timothee Chalamet cut a casual figure as he arrived for the fashion showcase, Kevin Mischel sat in the front row of the Haider Ackermann show

Ackermann was one of the designers approached to succeed Galliano at Dior, after declining the proposed succession of Martin Margiela in 2009.

In 2010, Karl Lagerfeld described him as his ideal successor at Chanel, and some commentators called him a ‘new Yves Saint-Laurent’.

After the show, Bella emerged in grey pinstripe trousers, which had cut out slashes at the sides. 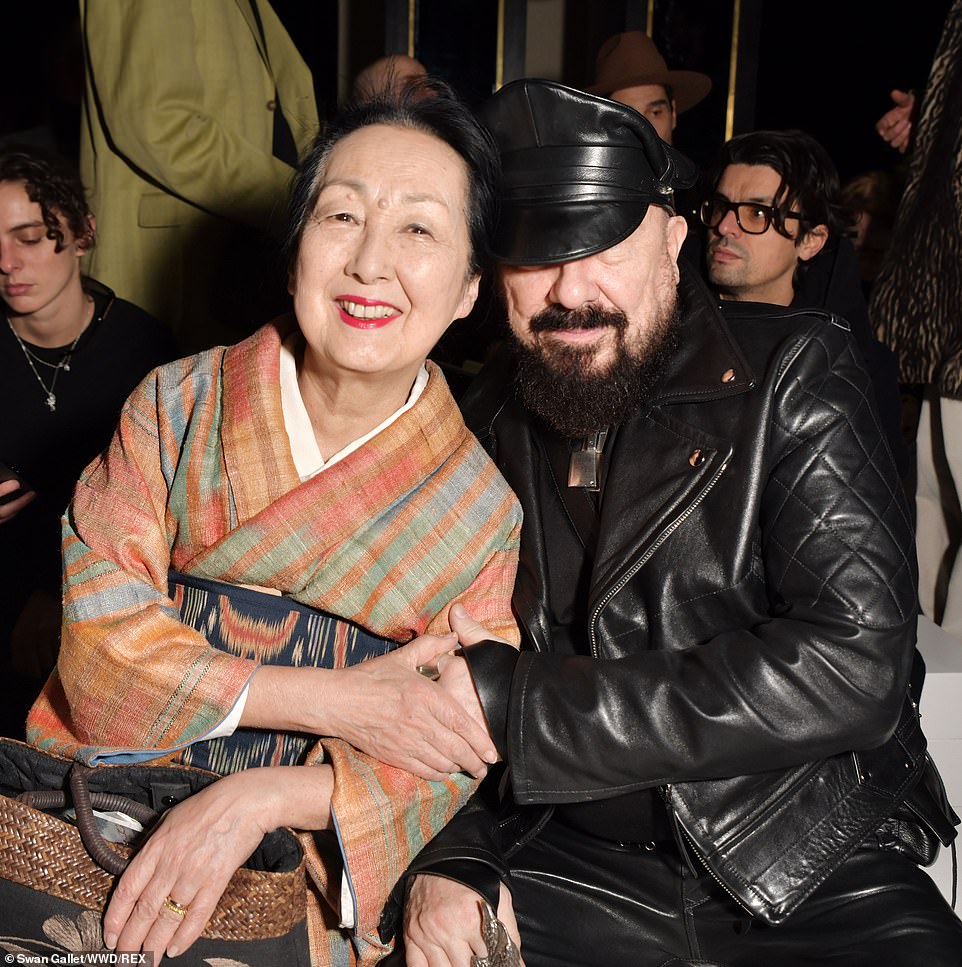 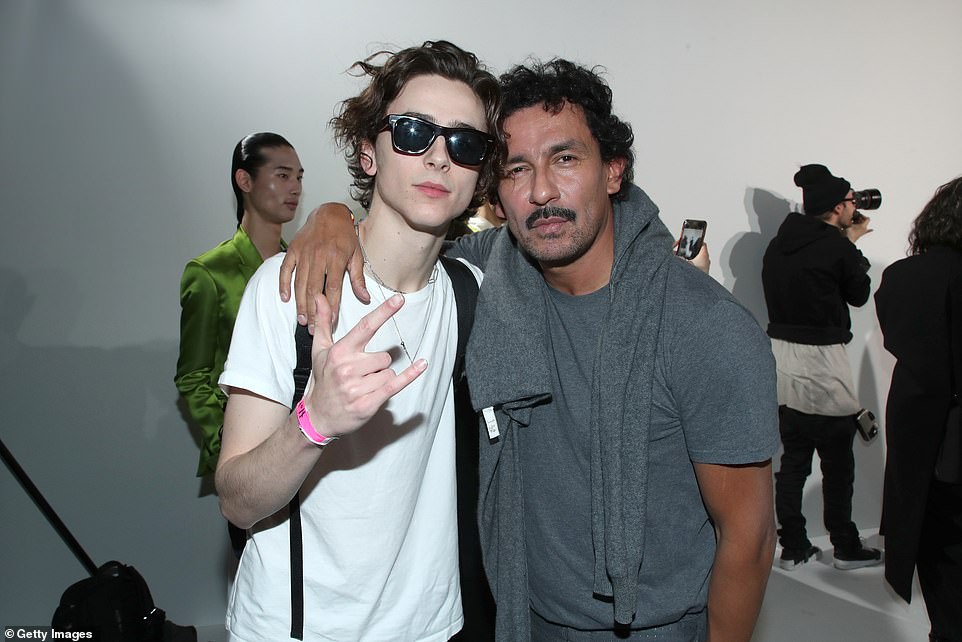 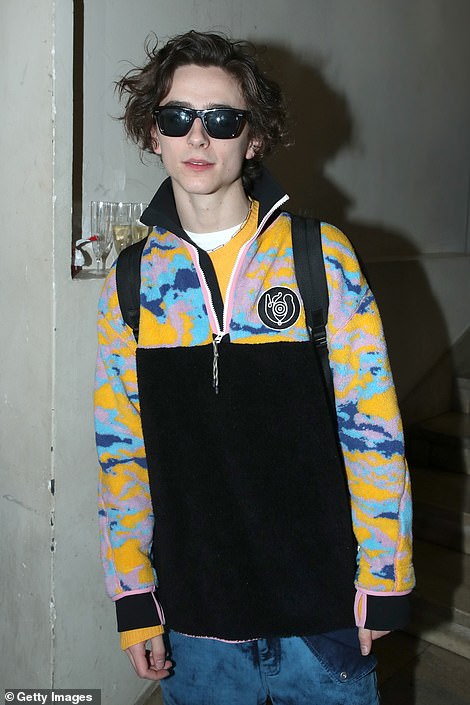 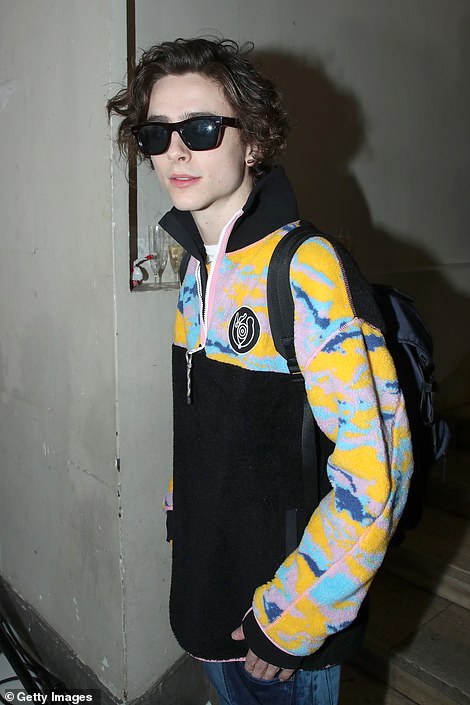 Cool: Timothee added a quirky vibrant jumper to his look later in the afternoon

The American beauty teamed the look with white vest, a black knit waistcoat and a long scarf, which she draped around her neck.

She shrugged a leather jacket over her arm and donned a pair of green tinted sunglasses.

Bella’s latest catwalk appearance comes after she joined sister Gigi and her mother Yolanda for dinner on Friday, amid protests happening in the city.

The model had arrived at César restaurant to join her sister and mum for dinner, who were reportedly being ‘held’ inside, as protesters descended on the streets and police were called in to control the situation.

The César Awards had been taking place in Paris at the time, with women’s groups protesting after director Roman Polanski’s movie An Officer and a Spy received 12 nominations at the awards, following rape allegations against him.

The awards, dubbed the French Oscars, has been subjected to backlash after Polanski’s film topped this year’s nominations.

Polanski has been accused of raping a 13-year-old girl in the US in 1977. French actress, Adèle Haenel, who worked with Polanski on her first film, recently alleged he also sexually harassed her when she was 12.

The filmmaker is facing multiple accusations of sexual harassment that he has repeatedly denied and Polanski decided not to attend the César Awards, given the protests.

It’s claimed the Hadids spent ‘three hours’ inside the restaurant while police tackled the situation outside.

MailOnline has contacted representatives for Bella, Gigi and Yolanda Hadid. 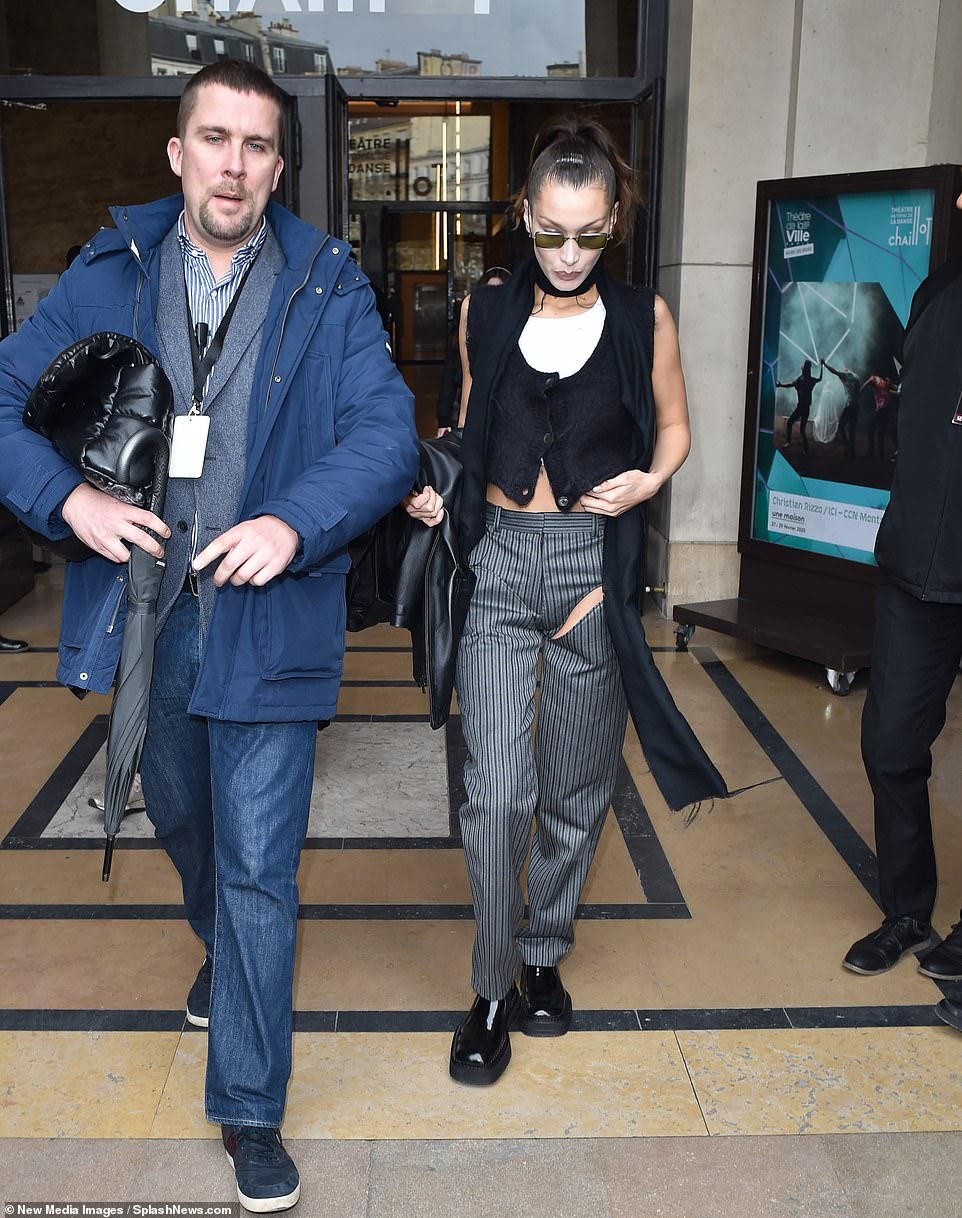 Sartorially-savvy: Bella shrugged a leather jacket over her arm and donned a pair of green tinted sunglasses