The 45-year-old, who was prime minister until three weeks ago, is conscious and her condition stable, her spokesman said.

Wilmes said on Saturday she had tested positive and that she had probably caught the virus from a relative rather than at work.

Wilmes led the country through the first six months of the pandemic, then switched jobs after her minority administration was replaced by a majority coalition this month.

Newly appointed Foreign Affairs Minister Sophie Wilmes is seen during the handover ceremony at the ministry in Brussels, on October 1, 2020 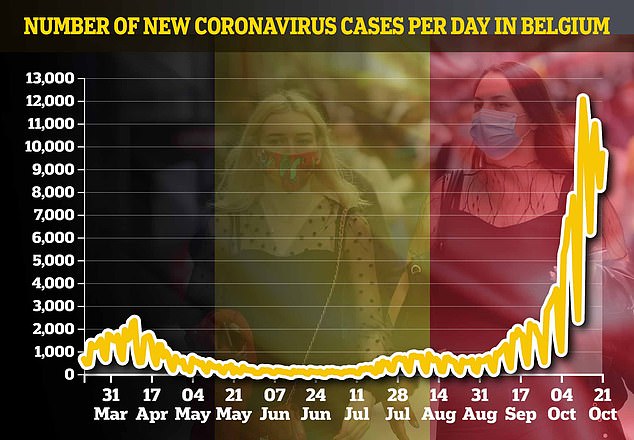 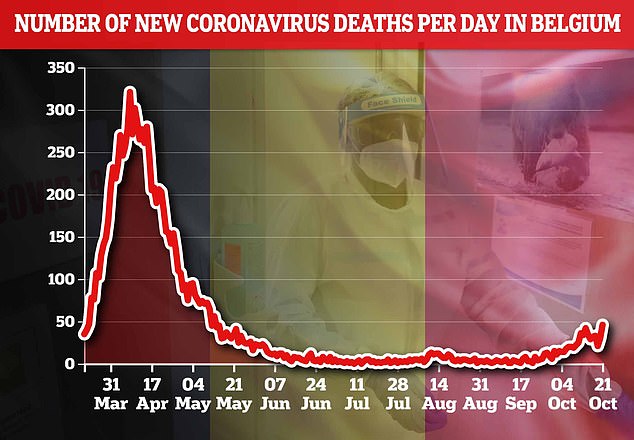 Alexander De Croo, who took over as prime minister at the start of October, said on Twitter he hoped she would recover swiftly.

‘No one is immune to this virus. All together, we will defeat COVID-19,’ he wrote.

Infections and hospital admissions are continuing to rise in Belgium, which has among the world’s highest rate of fatalities per capita from COVID-19.

Health Minister Frank Vandenbroucke warned on Sunday of a possible ‘tsunami’ ahead, with the country starting to lose control of the virus.

Belgium is second only to the Czech Republic in Europe in terms of infections per capita in the past two weeks.

The country of 11 million people reported 9,693 new infections per day in the week to Oct. 18, a 75 per cent increase from the week before.

An average of 319 people were admitted to hospital every day. So far, 10,539 people have died.

The government is set to meet on Friday to discuss the pandemic.

Leading virologist Marc Van Ranst said on Thursday the country needed to go into a short, full lockdown to avoid a long partial lockdown that would exhaust everyone and hit the economy 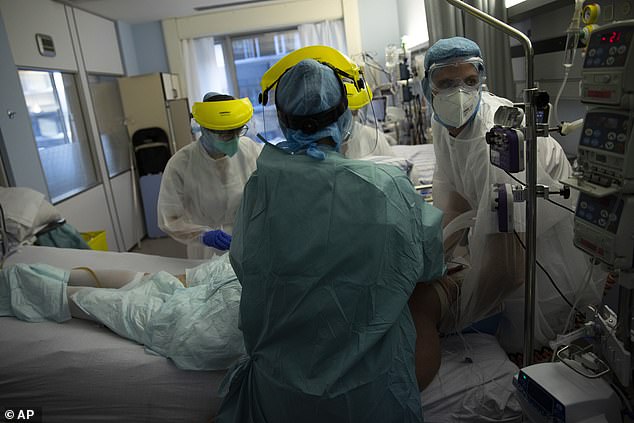 Medical staff work in the intensive care ward for COVID-19 patients at the CHR Citadelle hospital in Liege, Belgium yesterday

Elswehere in Europe, Czech hospitals are three weeks away from being overwhelmed by coronavirus cases as Germany announced a new high of more than 11,000 infections today and Spain imposed new curfews to fight the second wave.

The Czech Republic is seeing Europe’s biggest surge in infections with a new one-day record of 14,968 cases announced on Thursday morning.

Prime minister Andrej Babis says the health system will be unable to cope by November 11 unless the contagion slows, with new curbs on movement taking effect today along with shop closures and compulsory masks in cars.

The spike of 11,287 cases in Germany – demolishing the previous record of 7,830 – comes as Angela Merkel’s health minister Jens Spahn tested positive for Covid-19 in a fresh blow to a country generally praised for its handling of the pandemic.

Germany is also seeing sales of toilet paper and disinfectant rise again in a revival of last spring’s panic-buying – while Berlin today announced the cancellation of its popular Christmas market because of the mounting crisis. 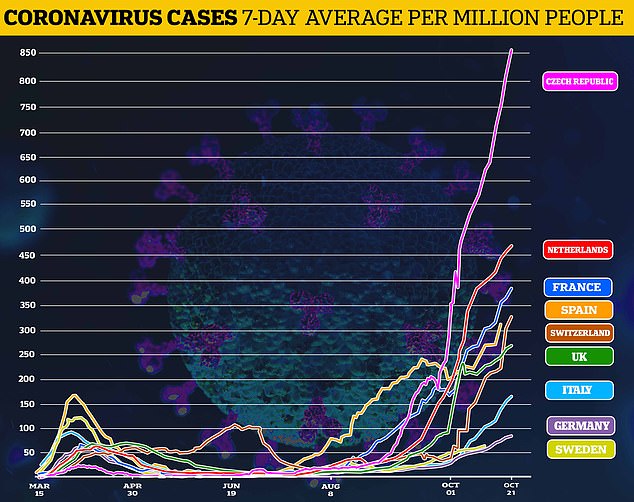 Spain warned today that the virus is ‘out of control’ as a curfew was imposed on Granada and 30 other municipalities after the country became the first in Western Europe to reach a million cases, while a midnight curfew will take effect in Rome tomorrow.

In the Czech Republic, prime minister Babis apologised for bringing back restrictions after saying repeatedly that the spring lockdown would not return.

‘I apologize even for the fact that I ruled out this option in the past because I was not able to imagine it might happen,’ he added.

‘Unfortunately, it has happened and now, above all, we have to protect the lives of our citizens.’

The Czechs acted quickly to close borders and shut down public life in the spring, emerging from the first wave with relatively few cases and deaths.

But no European country has been hit harder by the second wave, with more than 110,000 cases in the last two weeks in the country of 10.7million.

About 4,500 patients have filled up hospitals with the government expecting the health system will be overwhelmed in three weeks if the surge does not slow.