Belarus dictator Alexander Lukashenko has threatened to flood Europe with migrants and drugs in response to western sanctions over the Ryanair flight hijacking.

The strongman leader told parliament that he plans to weaken border controls designed to catch drug and people smugglers after EU leaders cut off air travel with his country and threatened further sanctions.

‘We were stopping migrants and drugs – now you will [have to] catch them and eat them yourself,’ he said.

It comes after world leaders including Joe Biden, Boris Johnson, Angela Merkel and Emmanuel Macron lined up to condemn Lukashenko for diverting a Ryanair flight to Minsk on Sunday so he could arrest a dissident journalist and his girlfriend – calling it an ‘outrageous’ act and promising ‘consequences’.

EU leaders subsequently advised all airlines to avoid Belarus airspace while moving to ban flights from the country entering the bloc, potentially costing the regime tens of millions in lost revenue per year.

‘Targeted’ sanctions against members of Lukashenko’s government are also being prepared, the EU said, in addition to long-standing sanctions on the regime.

The UN security council is also due to meet in a closed-door session today to discuss the issue further.

But Lukashenko appeared unbothered as he gave a fiery address to parliament today – insisting that he acted ‘in line with the law’ when he diverted the flight as it crossed his airspace. 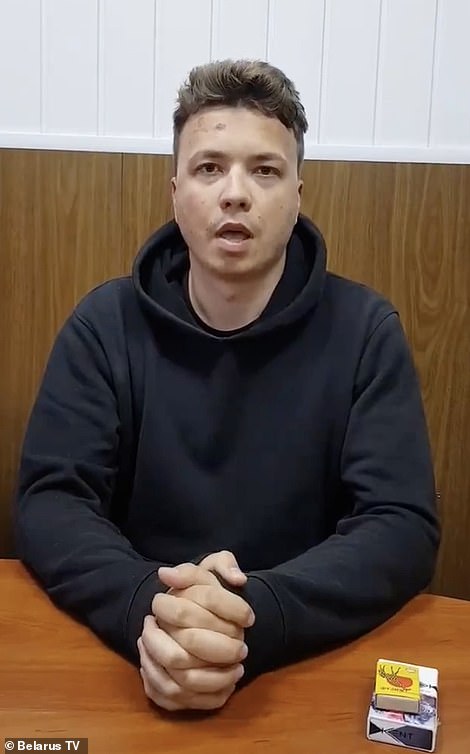 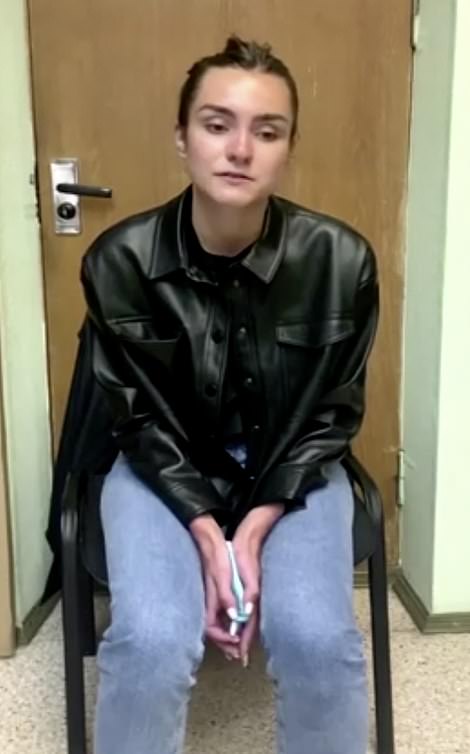 According to Lukashenko, the diversion had nothing to do with Roman or Sofia and actually took place after a bomb threat was issued out of Switzerland. The Swiss deny ever sending a bomb warning.

‘How were we supposed to act,’ Lukashenko asked. ‘My post requires me to protect people. I was thinking about the safety of the country.

‘I could not allow the plane to fall on our people’s heads. I acted in line with the law, protecting my people. And I will continue to do so.’

Around 1,500 migrants enter Europe each year through its eastern borders, according to monitoring group Frontex, which says it is the least-busy route to the continent.

EU leaders called for Belarusian airlines to be banned from European airspace and urged EU-based carriers to avoid flying over the country.

While the move is partly political, it could also cost the regime millions in lost air traffic control fees.

Here are the airlines that have so-far banned or restricted their pilots from flying in Belarus airspace:

Only a small number of those come via Belarus, the organisation says, though it is not clear how many are stopped from crossing.

During his speech, Lukashenko also claimed that Mr Protasevich was plotting a ‘bloody rebellion’ against him as part of a ‘hybrid war’ being waged against Belarus because it has close ties to Russia.

‘Our ill-wishers from outside and inside the country have changed the methods of attacking the state,’ he told lawmakers. ‘They have crossed red lines, crossed the boundaries of common sense and human morality.

‘This is no longer an information war, this is a hybrid modern war. Everything must be done, so that it does not grow into a hot one.

‘They are looking for new vulnerabilities, and this is directed not only at us: we are a testing ground for them, an experimental site before the dive to the East.

‘After testing with us, they will go there.’

But while western leaders are attempting to isolate and pressurize Lukashenko with sanctions, analysts said the short-term impact will be limited.

Anne Applebaum, an author and historian, said Lukashenko likely ‘made a decision’ ahead of the hijacking that sacrificing his ties to the west was worth it because he can simply rely on Russia instead.

Belarus – a former Soviet state – already benefits heavily from its ties to Moscow in the form of cut-price oil it sells at a profit, along with other financial concessions.

‘He has decided that remaining in power, the fate of his regime and probably his personal safety matters to him more than the rest of the country.’

But she added that sanctions are still an important tool that could pressure elites within Belarus to rebel and oust Lukashenko.

‘I think that’s what the Belarus opposition wants to have happen,’ she said.

Mr Protasevich made Belarus’s most-wanted list after becoming involved in huge anti-Lukashenko protests which took off after he declared victory in presidential elections last year which are widely believed to have been rigged.

The 26-year-old journalist was working for a news channel on messaging app Telegram called Nexta, which became a place for activists to organise.

From his base in Poland, Mr Protasevich angered the regime by posting dozens of videos of the demonstrations, which were the largest in Belarus since the collapse of the Soviet Union.

His work saw him declared an extremist and put on a terror watchlist. He is now being held in Minsk on charges of being a protest organiser – though Lukashenko’s regime refers to the demonstrations as ‘riots.’

It is unclear what charges girlfriend Sofia is being held on, as she has no known links to Mr Protasevich’s political activities. Late Tuesday, the regime released a video of her from inside detention in which she ‘confessed’ to running her own Telegram channel which published personal details of Belarus police officers.

Just a day earlier, Mr Protasevich had appeared in a similar video in which he ‘admitted’ to organising protests.

Families and supporters of the pair say the videos were produced under duress, and that the pair are likely being tortured. Mr Protasevich’s father Dzmitry said his son’s nose appears broken, and it also looks like he is wearing makeup to hide facial injuries.

While Ms Sapega does not appear wounded in her footage, mother Anna Dudich said she seems ‘afraid’ and is not speaking in a normal manner.

‘She sways, eyes in the sky – as if afraid of forgetting something,’ she told the BBC, calling the video a ‘setup’.

Lukashenko has faced unprecedented pressure at home with months of protests triggered by his reelection to a sixth term in an August 2020 vote that the opposition rejected as rigged.

But he has only doubled down on repression, and more than 35,000 people have been arrested since the protests began, with thousands beaten. 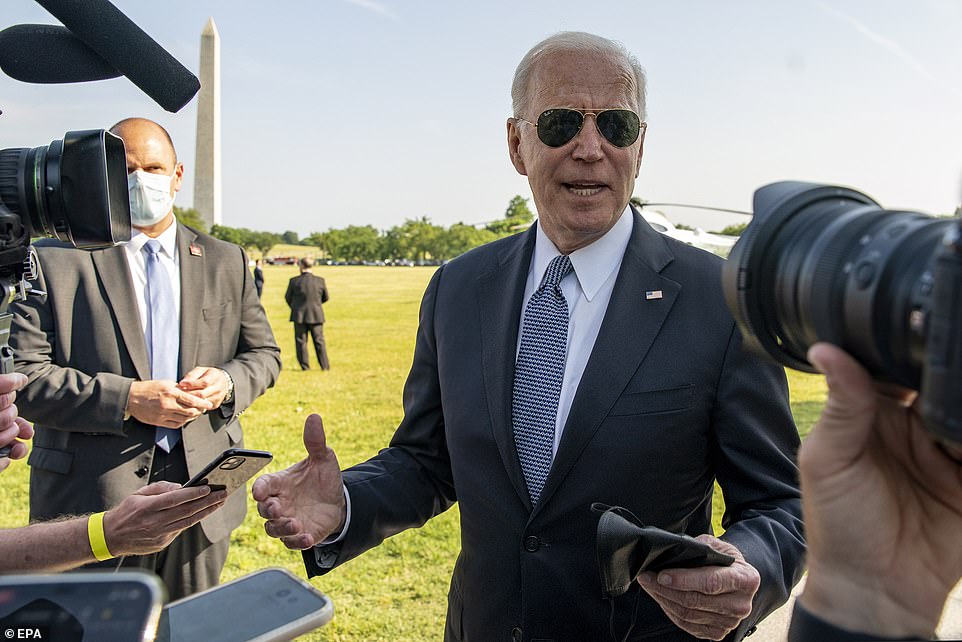 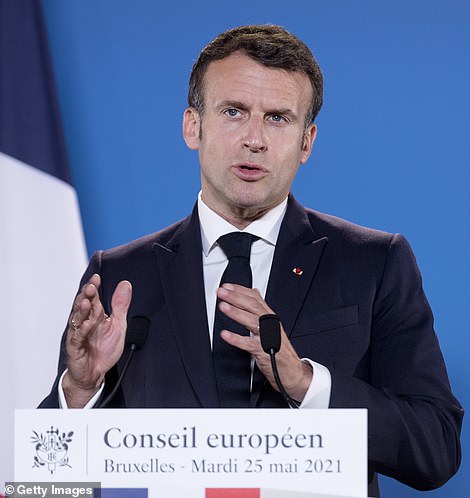 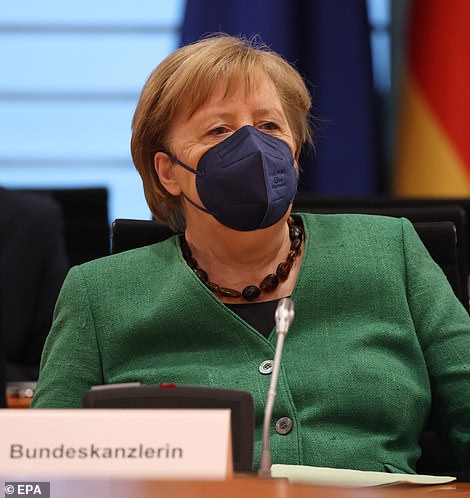 Emmanuel Macron (left) said banning aircraft from Belarus airspace will have a ‘biting’ effect on the regime, while Angela Merkel (right) has rubbished Lukashenko’s bomb threat excuse as ‘completely implausible’

Following his arrest, Protasevich’s mother has been begging the international community to save her son. Natalia Protasevich said the country’s authorities are ‘going to kill him’ unless world leaders help get him released.

She and her husband Dzmitry Protasevich said they saw clear signs of their son having been beaten in the first footage of him since he was detained.

Mr Protasevich, 48, said his son had been ‘forced’ to film the video confession which was released on state TV late Monday and appeared to have a broken nose and missing teeth.

‘I’m asking, I’m begging, I’m calling on the whole international community to save him,’ Mrs Protasevich said, breaking down in tears. She said she has not slept for two nights and grips her phone tightly, hoping for any news of her son.

‘He’s only one journalist, he’s only one child but please, please. I’m begging for help,’ she said. ‘Please save him. They’re going to kill him in there.’

Protasevich’s parents said they think he might be in a detention centre run by the secret service, still known as the KGB. But they do not know for sure and the uncertainty is torturing them.

‘The lawyer tried to see him today but she was turned down, she could not see him. We still don’t know if he is in there, what his condition is, how he is feeling,’ said Mr Protasevich, , a former soldier.

‘One of the ways our authorities torture is by not telling relatives where their loved ones are being held until the last minute,’ he said.

Mr Protasevich said his son looked extremely nervous in the video footage which emerged on Monday and appeared to have bruises on the left side of his face and on his neck.

‘The video was clearly staged. It was done under pressure and it should not be believed,’ he said. But, he added, ‘at least it shows he is alive.

‘It is very likely that his nose is broken, because the shape of it is changed and there’s much powder on the front of it, all of the left side of his face has powder, there’s some greasy stuff on the left side.

‘I think he was forced. It’s not his words, it’s not his intonation of speech, he is acting very reserved and you can see he is nervous,’ he said.

Holidaying with his girlfriend in Greece, Mr Protasevich said Roman ‘could not have predicted such an outcome’.

‘He was on a plane registered in an EU country… and flying from an EU country to an EU country,’ he said, with mother Natalia adding that he is still in shock that Belarusian authorities would deploy a fighter jet to force the plane to land.

‘They sent a fighter jet to get this young man. It’s an act of terrorism, I don’t think you can call it anything else. He’s been taken hostage. This is an act of pure revenge,’ she said.