Being stressed, nervous or exhausted in middle-age may increase risk of dementia, study claims

Being stressed, nervous or exhausted in middle-age may increase the risk of dementia, a study suggests.

At a time when most people are trying to juggle work, family and social commitments, it’s not unusual to suffer from mental distress.

But it could raise the risk of developing the brain disease by as much as 24 per cent, researchers have found.

A team from the University of Helsinki followed 68,000 people for up to 45 years, asking participants to fill out questionnaires about psychological symptoms.

Being stressed, nervous or exhausted in middle age may increase the risk of dementia, a study suggests (file photo)

Data on which participants went on to develop dementia was also obtained from health registries.

Analysis revealed those who said they ‘often’ suffered from stress, depression, nervousness or exhaustion – from as early as the age of 45 – had a 17 to 24 per cent increased risk of dementia.

The team said the reason for the link remains unclear, but that it is important to understand risk factors for the disease.

‘From the perspective of psychiatry, it’s particularly interesting that, through careful modelling, we established a connection between symptoms associated with mental distress and an organic brain disease.

‘In this study, psychological distress symptoms were significantly associated with increased risk of all-cause dementia.’

They added that the link between depression and exhaustion with dementia was detected significantly only in men.

‘This could indicate that among men reporting depressive symptoms “often”, the degree of symptoms may be more severe and thereby relate more strongly to an increased risk of dementia,’ they wrote. 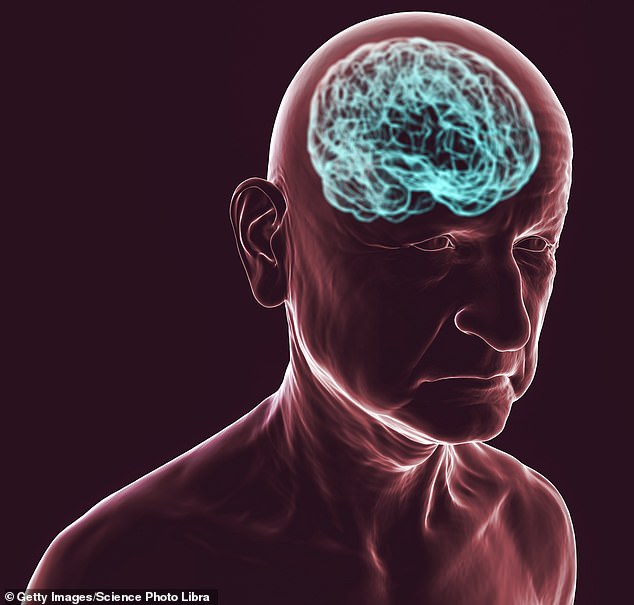 Being stressed could raise the risk of developing the brain disease by as much as 24 per cent, researchers have found (pictured is a conceptual illustration showing an elderly person with progressive impairments of brain function)

A recent study found that just six minutes of high-intensity exercise per day could help delay the onset of Alzheimer’s.

Scientists from the University of Otago in New Zealand found a six-minute bout of vigorous exercise, consisting of 40 seconds of cycling and 20 seconds of rest, boosted the availability of a protein linked to brain formation, learning and memory.

This represents one in every 14 people aged 65 years and over, with predictions that there will be over 1.5 million people with dementia by 2040.

The four diets that will help you live longer… ranked by Harvard (spoiler alert: veganism comes out on bottom)

NO amount of alcohol is safe, WHO experts warn

Dementia is an umbrella term used to describe a range of progressive neurological disorders (those affecting the brain) which impact memory, thinking and behaviour.

There are many types of dementia, of which Alzheimer’s disease is the most common.

Some people may have a combination of different types of dementia.

Regardless of which type is diagnosed, each person will experience dementia in their own unique way.

Dementia is a global concern but it is most often seen in wealthier countries, where people are likely to live into very old age.

HOW MANY PEOPLE ARE AFFECTED?

The Alzheimer’s Society reports there are more than 900,000 people living with dementia in the UK today. This is projected to rise to 1.6 million by 2040.

Alzheimer’s disease is the most common type of dementia, affecting between 50 and 75 per cent of those diagnosed.

In the US, it’s estimated there are 5.5 million Alzheimer’s sufferers. A similar percentage rise is expected in the coming years.

As a person’s age increases, so does the risk of them developing dementia.

Rates of diagnosis are improving but many people with dementia are thought to still be undiagnosed.

IS THERE A CURE?

Currently there is no cure for dementia.

But new drugs can slow down its progression and the earlier it is spotted, the more effective treatments can be.