By Stephen Matthews Health Editor For Mailonline and Afp

Beijing has today announced major Chinese New Year events will be cancelled to control the spread of the killer coronavirus.

Officials in the Chinese capital have scrapped events including temple fairs – which can attract thousands of tourists.

Residents have been urged to ‘strengthen prevention’ against the virus, which has killed 17 and potentially infected thousands.

Almost 600 people have been confirmed to have the virus, with cases recorded in the US, Singapore, Thailand, Japan, South Korea, Hong Kong, Taiwan and Macau – as well as China.

In a post on China’s Twitter-like platform Weibo, Beijing authorities added that the move was to help epidemic prevention and control.

Children pose for a photo near a rat sculpture ahead of the upcoming Chinese Lunar New Year at Ditan Park in Beijing on January 21. Beijing Tourism Net said the Beijing Ditan and Longtan Temple Fairs – scheduled for January 25 to 29 – would be cancelled 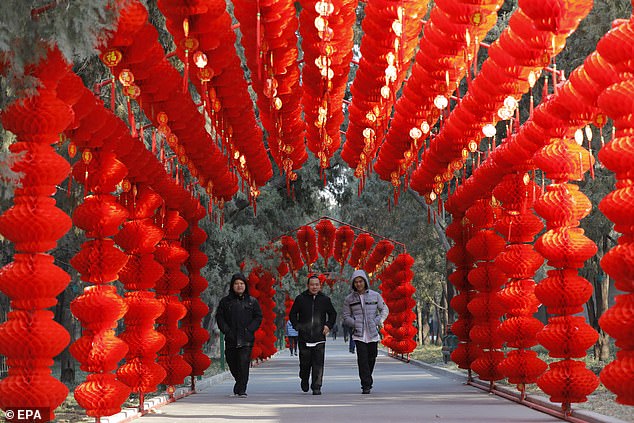 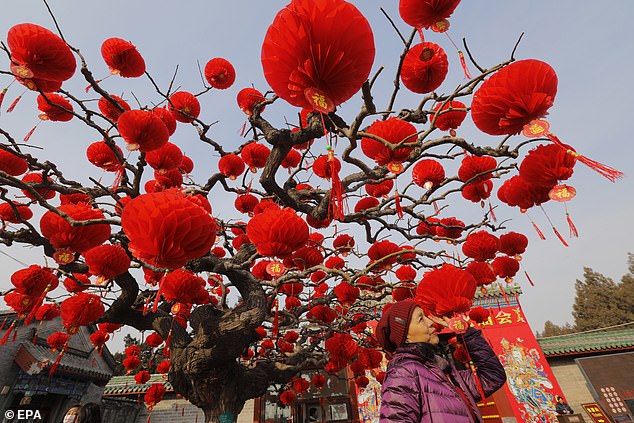 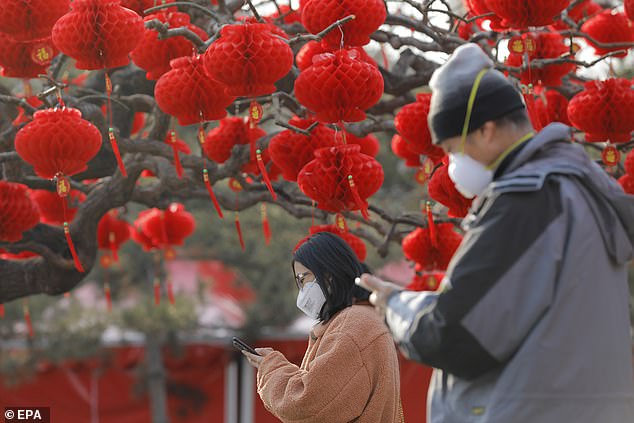 The thriving city, home to 21million people, is not the first to cancel events – football and boxing matches have been cancelled in Wuhan.

Wuhan is at the centre of the outbreak. It was yesterday quarantined, with officials scrapping all flights and trains from entering or leaving the city.

Residents in Wuhan were also banned from leaving, with shocking video emerging today of scenes of chaos throughout the capital of Hubei province.

One resident told the BBC the atmosphere in the city – which scientists yesterday predicted may have up to 10,000 cases – felt like ‘the end of the world’.

In other unprecedented moves, authorities in Ezhou – another city in Hubei – have shut down train stations to try to contain the coronavirus. 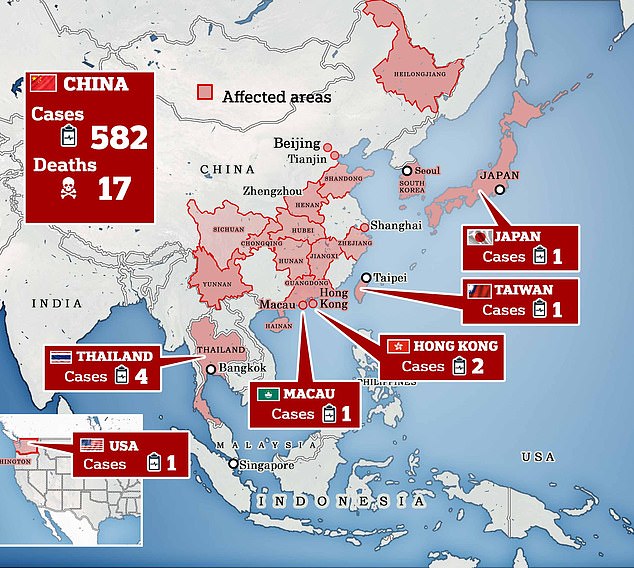 Chinese authorities say 17 people have died and more than 500 have been infected, air and rail departures from Wuhan are suspended from January 23 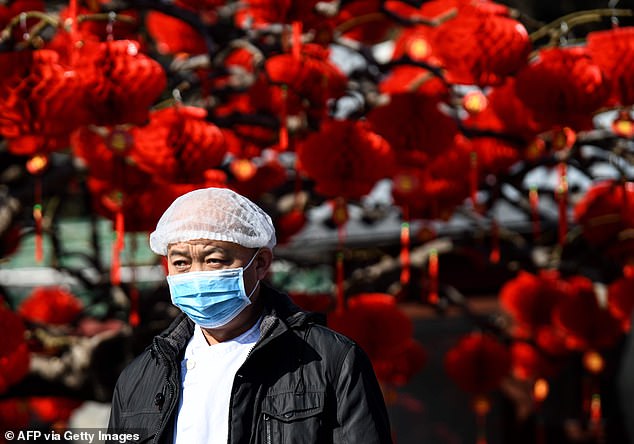 And Huanggang today announced it will suspend public buses and trains as well as ordering cinemas and internet cafes to close their doors.

Chinese officials have been disinfecting whole streets and parks with clouds of gas, while roadside quarantine tents have been erected to isolate suspected cases.

Beijing Tourism Net said the Beijing Ditan and Longtan Temple Fairs – scheduled for January 25 to 29 – would be cancelled.

Travellers have spread the coronavirus to seven countries already, including the US. Suspected cases have cropped up in Canada, Mexico, Brazil and Colombia.

European health officials fear the never-before-seen virus will reach the continent, with the UK and other nations already on high alert.

Heathrow Airport yesterday took the extraordinary measure to isolate all passengers from Wuhan, before the city cancelled all flights.

Coronavirus: What we know so far

What is this virus?

The virus has been identified as a new type of coronavirus. Coronaviruses are a large family of pathogens, most of which cause mild respiratory infections such as the common cold.

But coronaviruses can also be deadly. SARS, or severe acute respiratory syndrome, is caused by a coronavirus and killed hundreds of people in China and Hong Kong in the early 2000s.

Yes. Seventeen people have so far died after testing positive for the virus. What are the symptoms?

Its symptoms are typically a fever, cough and trouble breathing, but some patients have developed pneumonia, a potentially life-threatening infection that causes inflammation of the small air sacs in the lungs. People carrying the novel coronavirus may only have mild symptoms, such as a sore throat. They may assume they have a common cold and not seek medical attention, experts fear.

How is it detected?

The virus’s genetic sequencing was released by scientists in China to the rest of the world to enable other countries to quickly diagnose potential new cases. This helps other countries respond quickly to disease outbreaks.

To contain the virus, airports are detecting infected people with temperature checks. But as with every virus, it has an incubation period, meaning detection is not always possible because symptoms have not appeared yet.

How did it start and spread?

The first cases identified were among people connected to the Huanan Seafood Wholesale Market in Wuhan.

Cases have since been identified elsewhere which could have been spread through human-to-human transmission.

What are countries doing to prevent the spread?

Countries in Asia have stepped up airport surveillance. They include Japan, South Korea, Thailand, Hong Kong, Indonesia, Malaysia and Philippines.

Australia and the US are also screening patients for a high temperature, and the UK announced it will screen passengers returning from Wuhan.

Is it similar to anything we’ve ever seen before?

Experts have compared it to the 2003 outbreak of severe acute respiratory syndrome (SARS). The epidemic started in southern China and killed more than 700 people in mainland China, Hong Kong and elsewhere