Bumblebees are more playful than we’ve given them credit, a new study suggests.

Scientists in London set up cameras around a specially-created miniature arena to film bumblebees and how they’d interact with small wooden balls.

As the clips show, the bees went out of their way to roll the balls repeatedly despite there being no apparent incentive for doing so.

The adorable footage suggests the insects ‘play’ just like humans, and adds to mounting evidence that bees may experience positive ‘feelings’. 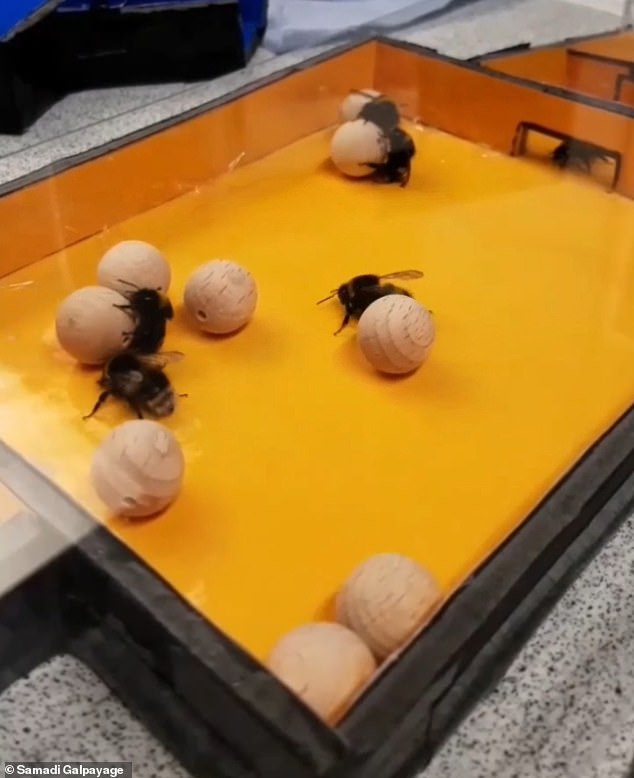 Play is not limited to humans, but is a phenomenon seen across many animal species.

It is thought to contribute to the healthy development and maintenance of an animal’s cognitive and motor abilities, which may, for example, benefit foraging strategies, and is considered an important aspect of animal welfare.

Most clear examples of play come from large-brained mammals and birds, but investigations of play in other animals are limited.

The research paper, entitled ‘Do bumble bees play?’, has been published today in the journal Animal Behaviour.

‘It is certainly mind-blowing, at times amusing, to watch bumble bees show something like play,’ said study author Samadi Galpayage at Queen Mary University of London.

‘They approach and manipulate these “toys” again and again.

‘It goes to show, once more, that despite their little size and tiny brains, they are more than small robotic beings.

‘They may actually experience some kind of positive emotional states, even if rudimentary, like other larger fluffy, or not so fluffy, animals do.

‘This sort of finding has implications to our understanding of sentience and welfare of insects and will, hopefully, encourage us to respect and protect life on Earth ever more.’

For the study, researchers filmed 45 bumblebees as they made their way through a specially-created ‘experimental arena’.

It was designed to give them the option of walking through an unobstructed path to reach a feeding area or deviate from this path into an area with 18 wooden balls.

In all, 12 of the balls were spray painted yellow or purple, while the remaining six balls were left with their original wooden colour.

The arena was designed to give bees the option of walking through an unobstructed path to reach a feeding area or deviate from this path into areas with wooden balls. Shown here is the experimental set-up with sucrose (S) and pollen (P) marked 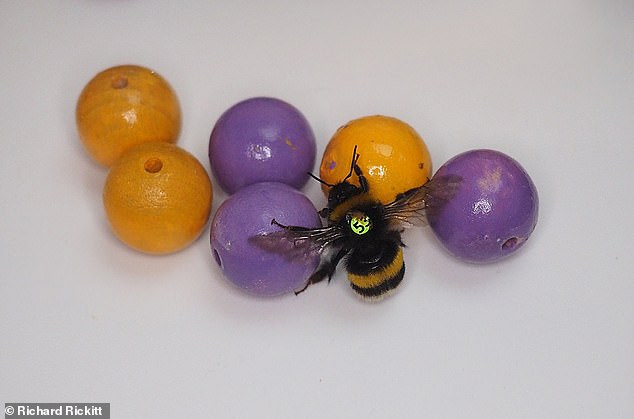 In all, 12 of the balls were spray painted yellow or purple, while the remaining six balls were left with their original wooden colour 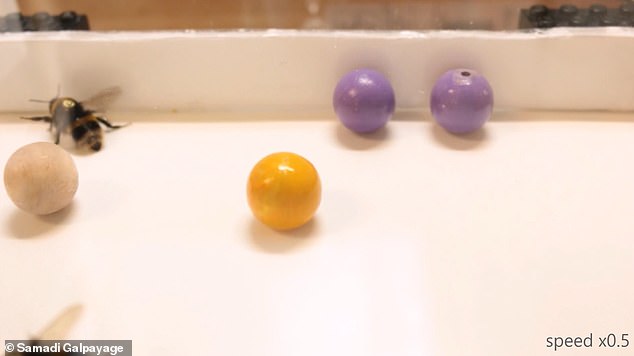 According to the team, repeated ball-rolling behaviour suggested that the act was voluntary and ‘inherently rewarding’ for the bees

BUMBLEBEES FEEL PAIN AND SHOULD BE INCLUDED IN ANIMAL WELFARE LAWS

Researchers from Queen Mary University of London have revealed that bumblebees can feel pain.

In the study, the team showed that bumblebees can modify their response to painful stimuli in a similar way to other animals that are known to feel pain.

‘If insects can feel pain, humans have an ethical obligation not to cause them unnecessary suffering,’ said Matilda Gibbons, first author of the study.

‘But the UK’s animal welfare laws don’t protect insects – our study shows that perhaps they should.’

The sex of individual bees was also identified (28 females and 17 males) as they were placed into the arena, which was connected to a nest.

The experiment was run for three hours every day for 18 days before the video footage was analysed.

Overall, a total of 910 ball-rolling actions by the 45 bumble bees were recorded.

According to the team, the repeated behaviour suggested that ball-rolling was voluntary and ‘inherently rewarding’ for the bees.

This was supported by a further experiment where another 42 bees were trained to find freely movable balls in one of two different coloured chambers.

They found the bees showed a preference for the colour of the chamber where they had rolled the balls when they were given the choice.

Young children and other juvenile mammals, as well as birds, are the most playful, previous research has found.

Interestingly, male bees rolled the balls for longer than their female counterparts – but the researchers insist they were not trying to mate with the objects. 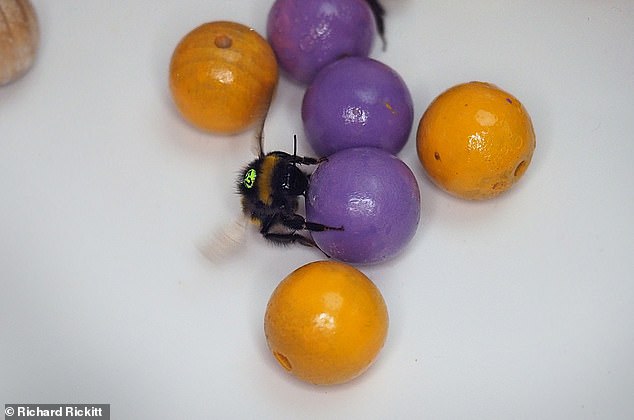 The research paper, entitled ‘Do bumble bees play?’, has been published today in the journal Animal Behaviour

‘When attempting to mate, male bumblebees position themselves on top of a female and, while holding onto her with their legs, try to insert their genitalia,’ they explain.

‘However, we never observed male bees everting their genitalia while in contact with the balls.’

Rolling balls did not contribute to survival strategies, such as gaining food, clearing clutter, or mating and was done under stress-free conditions, which indicates the bees were simply playing.

The research builds on previous experiments at Queen Mary University that taught bumblebees to score goals, by rolling a ball to a target in exchange for a reward.

They had to move a pea-sized ball to a goal by ‘kicking’ it, getting a drop of sweet nectar if they scored.

Bumblebees are the heavy lifters of the insect world and can fly back to the hive carrying almost their own body weight in nectar, a 2020 study found.

US scientists discovered that bees can carry up to 80 per cent of their own body weight while flying.

To do this they can employ a peculiar ‘economy mode’ flying technique that lets them expend less energy as they carry heavy loads.

The researchers measured the energy expended by bumblebees flying in a specially designed chamber – an emptied snowglobe.

Because bumblebees fuel flight from the nectar they are carrying, they should get lighter as they fly.

As they then get lighter, they would have to use less energy to keep them in the air, the researchers had originally thought.

However, the team found that the bees could actually use less energy per unit load when they were more heavily laden.