A 12-year-old refugee from war-torn Ukraine came off the bench to score the winning goal for Shakhtar Donetsk in a charity friendly match against Lechia Gdansk on Thursday.

The boy, named Dmytro Keda, who is from the city of Mariupol, came on as a substitute in the match before the heart-warming moment occurred.

As the game was heading into extra-time with the score tied at 2-2, Shakhtar brought on the Ukrainian youngster.

Keda was allowed to net the winning goal for his side, the team he supports and was then lifted by the players into the air in moving scenes at the Polsat Plus Arena.

The match was part of the clubs tour ‘Shakhtar Global Tour for Peace’, which started with a 1-0 victory over Olympiacos.

Shakhtar have said all proceeds from the tour will be ‘allocated for humanitarian aid to the people of Ukraine’.

Refugee Dmytro Keda, 12, came on a substitute for Shakhtar Donetsk against Lechia Gdansk 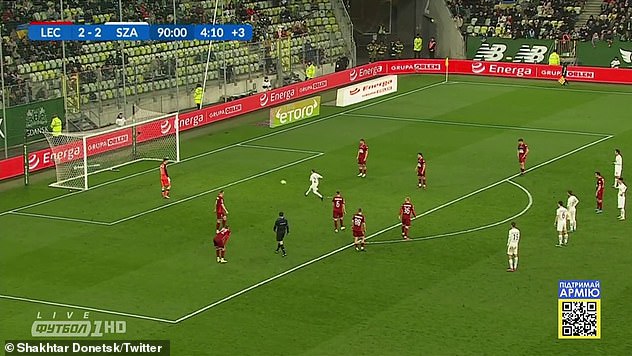 The boy scored to put his side 3-2 up with the help of his teammates, as extra-time loomed

Speaking after the win over Olympiakos, Shakhtar’s sporting director said: ‘I’m always proud of the team.

‘The last training session they did was January 19. When I asked if they were ready to play on Saturday, they said: ‘Darijo, we are Ukrainians, we are ready for everything!’

‘They had just one training session together yesterday, and they were playing together for the first time in their life – we took seven or eight players on loan from Mariupol. 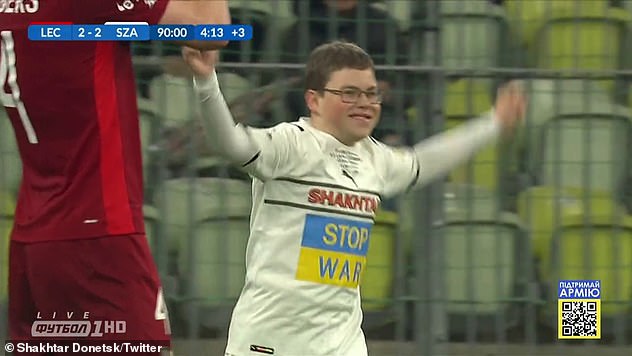 Keda was delighted when scoring, turning away with his arms in the air celebrating the goal 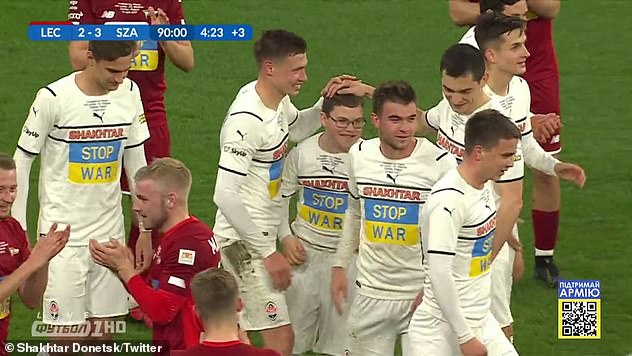 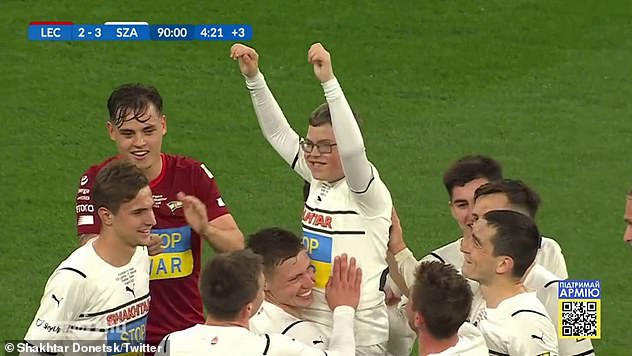 The boy was then lifted into the air by the Shakhtar Donetsk players, as Gdansk stars clapped

‘[Dmytro] Myshnyov, the captain of Mariupol, doesn’t have his house, his car, his apartment anymore – we brought him here to play for us, and today he is a symbol of Mariupol.

‘We are really proud of that.’

Shakhtar will continue their tour against Fenerbahce in Turkey on Tuesday, before rounding it off against Hajduk Split in Croatia on May 1.

The latest on the Ukraine-Russia conflict

Russia’s Black Sea flagship which sank yesterday after an explosion on board may have been carrying nuclear warheads, analysts and experts have warned today, as they called for an emergency investigation into the threat.

The Moskva, a Soviet-era guided missile cruiser, sank near the port of Sevastopol on Thursday after Ukraine said it hit the ship with two cruise missiles, causing it to roll over. Russia has admitted the vessel sank after a fire and explosion on board, but has not said what caused the blaze.

There are now fears that the Moskva could have taken two nuclear warheads into the depths in what could turn into a ‘broken arrow’ incident – American military slang for an accident involving nuclear weapons.

Mykhailo Samus, director of a Lviv-based military think-tank; Andriy Klymenko, editor of Black Sea News; and Ukrainian newspaper Defence Express all warned today that the Moskva was designed to carry warheads which could be fitting into the nose of its supersonic P-1000 missiles – designed to take out American aircraft carriers.

‘On board the Moskva could be nuclear warheads – two units,’ Samus said, while Klymenko called on other Black Sea nations – Turkey, Romania, Georgia, and Bulgaria – to insist on an explanation. Where are these warheads? Where were they when the ammunition exploded,’ he asked.

Meanwhile Defence Express said that it had ‘interviewed experts, including designers and naval officers, who unanimously and independently gave the following answer – there is a real possibility that the affected flagship of the Russian Black Sea Fleet could have had nuclear munitions on board.

The paper added: ‘Are nuclear munitions always on board, or are they loaded only by special order?’ 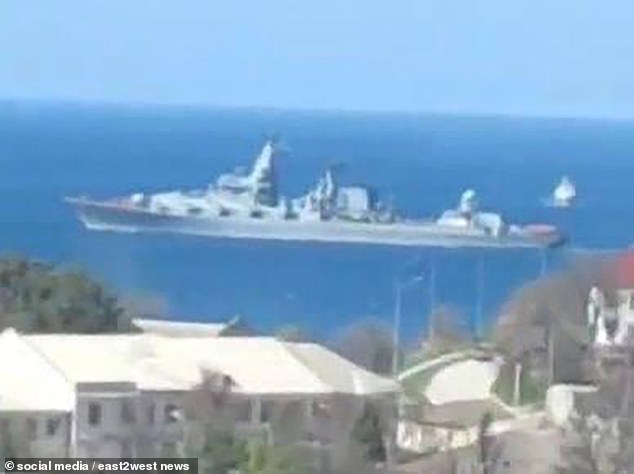 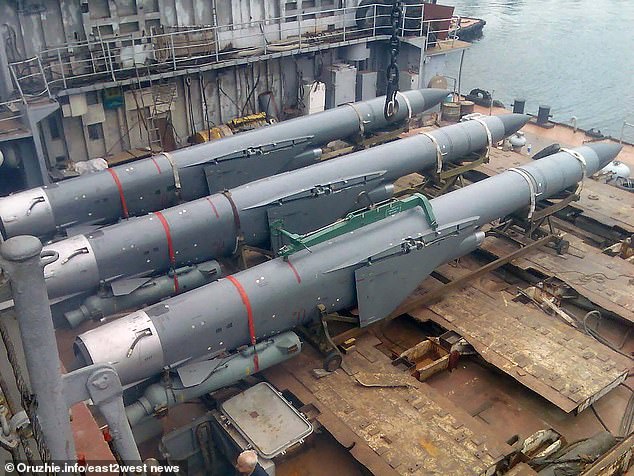 Speculation about a nuclear disaster swirled as questions also remained over the Moskva’s 510-strong crew, who have been largely unaccounted for since the ship was struck amid the expectation that hundreds will have died in the on-board explosion.

So-far, only around 50 of the crew are accounted for – having been picked up by a Turkish vessel – with another 14 reportedly flown to the port of Sevastopol, leaving around 450 whose fates are unknown. Russia claims to have evacuated the entire crew, but video taken in Sevastopol overnight shows dozens of cars purportedly belonging to the sailors still parked in the port – suggesting their owners had not returned to collect them.

Explosions on comparably-sized ships often produce hundreds of deaths. When the General Belgrano – an Argentinian warship – was struck by two British torpedoes during the Falklands War, the resulting blast killed a total of 334 people. The Belgrano was smaller than the Moskva, and its ammunition did not explode.

The Moskva got into trouble overnight Wednesday as it sailed around 60 miles off the coast of Odesa, Ukraine’s largest port and main naval base. The Ukrainian military said it was struck with two Neptune cruise missiles fired by a coastal battery, which struck the port side of the vessel.

Russian military sources said the ship had rolled on to its side and caught fire after the blast, while US intelligence sources said the vessel suffered a ‘large’ explosion that left it heavily damaged before it sank.

Moscow has said only that the vessel suffered a fire and blast before its navy attempted to tow the ship back to Sevastopol, but during the operation it sank in rough seas. The exact location of the wreck is unknown.

The loss of the Moskva – the flagship of Russia’s Black Sea fleet and the vessel that was told to ‘go f*** yourself’ by Ukrainian troops as it demanded their surrender on Snake Island – is a huge propaganda win for Kyiv as well as another embarrassing loss for Putin’s beleaguered armed forces.