Police in south Wales had recovered the silverware from reigning BDO champion Wayne Warren, who had vowed to keep it after being paid only £23,000 in prize money after winning the competition in January 2020.

The prize money had been slashed from £77,000 12 months earlier and BDO Enterprises, the organisation’s commercial arm, subsequently went into liquidation and the Championship wasn’t staged this year.

BDO chairman Des Jacklin, pictured with wife Paula, has been accused of a lockdown breach after driving from Lincolnshire to South Wales to pick up the World Championship trophy 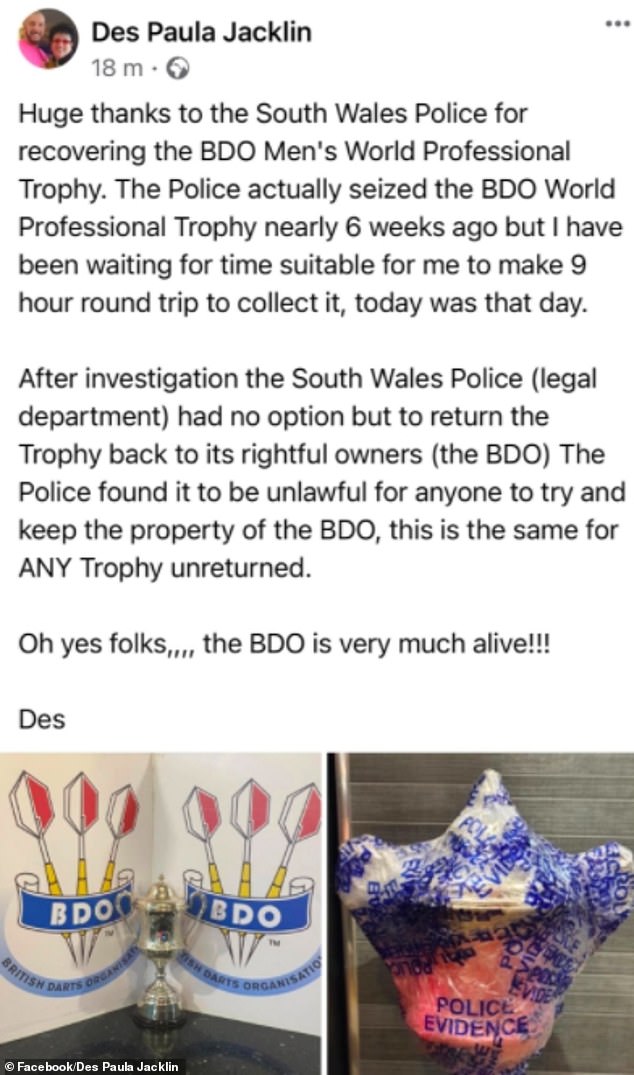 Posting a picture of the trophy in police evidence wrapping, Jacklin posted on Facebook that he made the 430-mile round trip journey on Friday to collect it from Pontypridd

After police contacted 58-year-old roofer Jacklin and forced him to hand back the trophy, Jacklin revealed on Facebook that he’d driven from Gainsborough in Lincolnshire to Pontypridd on Friday to pick it up.

‘The Police actually seized the BDO World Professional Trophy nearly 6 weeks ago but I have been waiting for a suitable time to make [the] 9 hour round trip to collect it, today was that day.

‘After investigation the South Wales Police (legal department) had no option but to return the Trophy back to its rightful owners (the BDO).

‘The police found it to be unlawful for anyone to try and keep the property of the BDO. This is the same for ANY trophy unreturned. 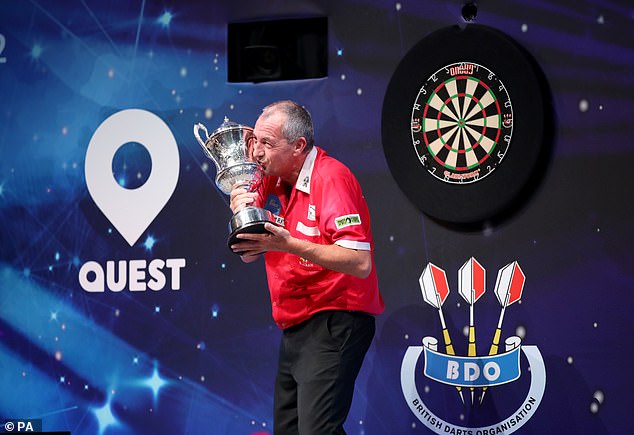 There was a strong backlash when Jacklin’s post emerged on Twitter, with darts fans asking if the journey to Wales was truly essential amid the Covid-19 lockdown 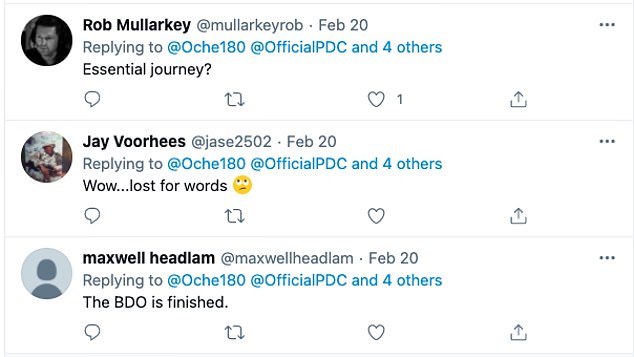 As reported by The Sun, there was a strong backlash from social media users to the post, most asking whether the cross-country trip was truly ‘essential’ during a pandemic.

One wrote on Twitter: ‘I’m intrigued to hear why police thought it was okay for them to do it. Surely they should have fined them on the spot?’

Another darts fan tweeted: ‘To make a 9 hour trip to steal back a trophy to an organisation that is defunct is a selfish act!’

In a later post, Jacklin wrote: ‘I’m getting messages saying I’ve been reported to the police for Covid-19 travel violations.

‘I picked up the trophy from Pontypridd police station.

‘I’ve been liaising with sergeants from the station and police handlers. People will stop at nothing to try and get one on me.’

Sportsmail has contracted Jacklin, the BDO and South Wales Police for comment.