‘I’m not going to spend the time I’ve got worrying’: BBC’s George Alagiah says he wants to enjoy life despite his cancer returning

BBC newsreader George Alagiah says he plans to spend the time he’s got living and enjoying his family and friends despite his cancer returning earlier this year.

The TV journalist, 64, recalled seeing headlines about his recent diagnosis in April and thinking it was time to ‘start ordering the white lilies’ – a flower commonly seen at funerals.

He was first diagnosed with the illness in 2014 and later said it had spread from his bowel to his liver, lymph nodes and lungs.

Speaking on BBC Radio 5 Live, he said: ‘I saw some of the headlines actually about it and thought: ‘Oh my God, are they talking about me?’

‘I thought it was time to start ordering the white lilies.’

Alagiah said he judged the seriousness of his condition by his doctors’ reactions.

November 2015: After completing treatment, he returned to presenting duties at the BBC.

January 2018: In a tragic turn, he revealed that the cancer had returned.

March 2018: Mr Alagiah noted that his cancer was terminal and could have been caught earlier if the screening programme in England was offered at 50 instead of 60, like it is in Scotland.

August 2018: Screening age in England is lowered after campaign led by Mr Alagiah.

October 2019: Gives interview where he admits cancer is ‘knocking on the door everyday’ but says he isn’t scared of dying.

March 2020: Has a brief, successful battle with coronavirus.

April 2020: Tests reveal his cancer has spread to his lungs, having previously been in his lymph nodes and liver.

June 2020: Shares his latest update, says he has talked to his doctor about ‘sorting out his affairs’.

He said: ‘I take my cue from my doctors and they don’t look scared to me. I’ve known them now for six years.

‘In fact I said to one of them a couple of years ago that he better do the worrying for me because I can’t deal with that.

‘I’m not going to spend the time I’ve got worrying.

‘I want to spend the time I’ve got living and doing the things I want to do and enjoying my family and friends.’

Speaking about the moment in April when his doctor told him his cancer had spread to his lungs, he added: ‘I look at him when he gives me news like the news he gave me earlier this year, that it had spread.

‘I look in his eyes and he didn’t look frightened so I’m not frightened.’

The Sri Lanka-born newsreader, who tested positive for Covid-19 in March, said he had begun to see his extended family again while maintaining social distancing.

He said: ‘We’ve started over the last three weekends, actually doing the whole marching them through the house and into the garden.

Earlier this month he told the Times: ‘My doctors have never used the word ”chronic” or ”cure” about my cancer.

‘They’ve never used the word ”terminal” either. I’ve always said to my oncologist, ”Tell me when I need to sort my affairs out”, and he’s not told me that, but what he did tell me is that the cancer is now in a third organ. It is in my lungs.’

Mr Alagiah underwent 17 rounds of chemotherapy to treat advanced bowel cancer in 2014 before returning to presenting duties in 2015.

He credits his family, his wife Frances and his two sons Adam and Matthew for helping him through the tough times.

The well-known presenter previously said his cancer, which is terminal, could have been caught sooner if over-50s were screened in England. 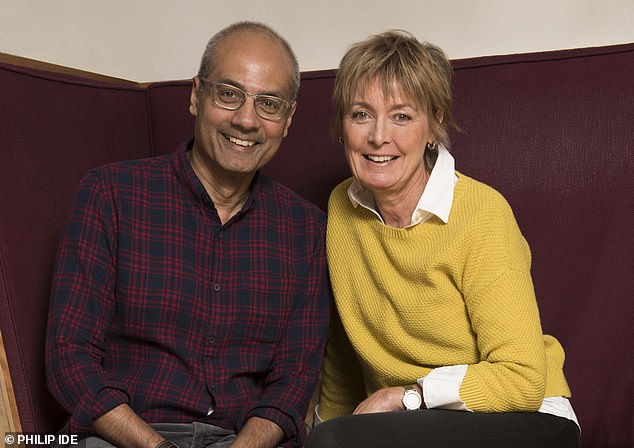 At the time, screenings were only offered once you hit the age of 60, unlike Scotland which offers it at 50.

After a campaign led by Mr Alagiah, the rules were changed to offer screening to over 50s in August 2018.

In November, Mr Alagiah revealed he chose to remain ignorant of the mortality statistics around his illness.

Speaking to the Bowel Cancer UK podcast he said he examined his life for six months after receiving the news, and decided he was happy despite his illness.