The BBC’s Africa editor has thanked well-wishers for their ‘compassion’ as he steps down from his role due to post-traumatic stress disorder (PTSD) after decades of reporting from conflict zones around the world.

The BBC previously confirmed Keane is suffering from PTSD, with his diagnosis stemming from ‘several decades of work in conflict zones around the world’, including Rwanda and Northern Ireland.

Jonathan Munro, its head of newsgathering, confirmed that Mr Keane had been suffering with the condition ‘for several years’. 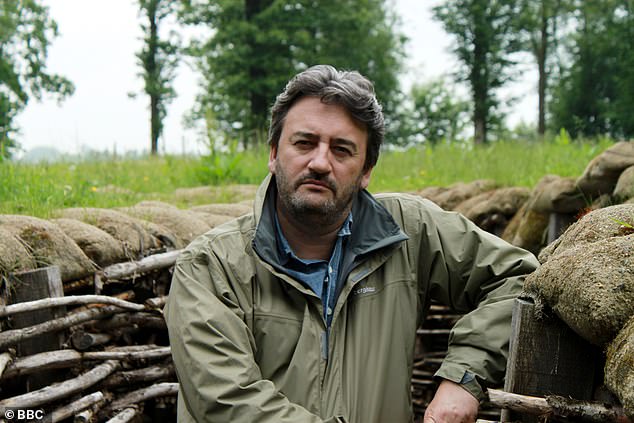 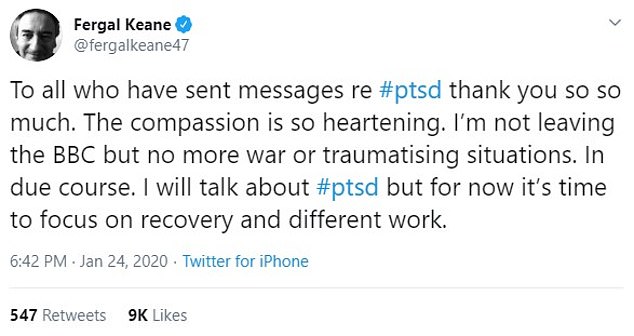 Keane thanked well-wishers on Twitter, saying the ‘compassion is so heartening’, adding he is not leaving the BBC but ‘focusing on recovery’ and ‘different work’

In a tweet, Keane wrote: ‘To all who have sent messages re #ptsd thank you so so much. The compassion is so heartening.

‘I’m not leaving the BBC but no more war or traumatising situations. In due course I will talk about #ptsd but for now it’s time to focus on recovery and different work.’

Keane, married to Anne Flaherty, who he met at the Irish Press, was educated in both Cork and Dublin before beginning his career in journalism at the Irish newspaper Limerick Leader.

Keane then moved to The Irish Press and then on to RTÉ.

The father-of-two worked in the print press industry for nine years until he joined the BBC in 1989 as a Northern Ireland correspondent.

The 59-year-old has been at the forefront of reporting social and political change throughout his career including his coverage of the regime changes in South Africa in 1994 and the handover of Hong Kong to China in 1997.

The journalist reported from countries including Lebanon, Angola and Afghanistan.

In 1997 he created a huge reaction when he read out a moving letter to his new-born son Daniel on Radio 4’s From Our Own Correspondent.

He reflected on what he had seen as a reporter and also on his thoughts on being a new father.

In the letter he said: ‘It’s also true that I am pained, perhaps haunted is a better word, by the memory suddenly so vivid now of each suffering child I have come across on my journeys.’

He was appointed OBE for services to journalism in 1996 as well as winning an Amnesty television prize in 1994 for an investigation into the Rwandan genocide. 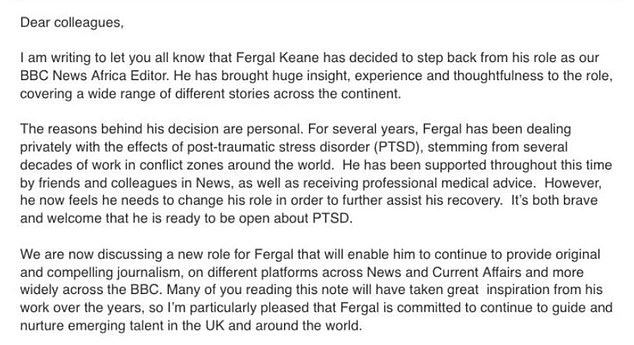 Jonathan Munro, its head of newsgathering, confirmed that Mr Keane had been suffering with the condition ‘for several years’

In 2005, Keane, alongside former colleague Billy Kelly, founded the Msaada charity to assist survivors of the atrocity.

Keane was awarded an Honorary Doctor of Letters by the London Metropolitan University in 2015.

This time last year, Keane was named recipient of the Hall of Fame award at the Cork Person of the Year awards.

Mr Munro told staff the journalist has received support from ‘friends and colleagues’ as well as medical professionals.

He added: ‘However, he now feels he needs to change his role in order to further assist his recovery.

‘It’s both brave and welcome that he is ready to be open about PTSD.’

Following the news, RTÉ journalist Fiachra Ó Cionnaith wrote on Twitter: ‘I don’t tend to do too much public praising of other journalists, but Fergal Keane is an inspirational journalist. And not without a cost to himself.’

He joined the BBC in 1989 as the broadcaster’s Northern Ireland correspondent, before covering South Africa and Asia.

The veteran war reporter was appointed as the corporation’s South Africa correspondent in 1990, and covered prominent stories on the genocide in Rwanda, later winning a BAFTA award for his documentary, Valentina’s Story.

In 1995 he became the BBC’s Asia correspondent, based in Hong Kong, and later returned to the corporation’s London office.

Over his career Keane won a great many awards, including the Amnesty International Press Award in 1993, the James Cameron Prize for war reporting, and the 1995 Orwell prize.

He was also appointed OBE for services to journalism in 1996.

What is post-traumatic stress disorder (PTSD)?

is an anxiety disorder caused by very stressful, frightening or distressing events.

People with PTSD often suffer nightmares and flashbacks to the traumatic event and can experience insomnia and an inability to concentrate.

Symptoms are often severe enough to have a serious impact on the person’s day-to-day life, and can emerge straight after the traumatic event or years later.

PTSD is thought to affect about one in every three people who have a traumatic experience, and was first documented in the First World War in soldiers with shell shock.

People who are worried they have PTSD should visit their GP, who could recommend a course of psychotherapy or anti-depressants, the NHS say.