Have you ever had floor envy? I didn’t even know there was such a thing until I walked into our room at the One&Only Le Saint Géran in Mauritius.

I was greeted by a beautiful, lime-washed parquet floor. Except that it wasn’t made of wood, but of stone. I loved it. But then I also loved everything else about the room, the result of a £41 million refurbishment two years ago.

Once decorated in Dutch colonial style, the hotel has been transformed to cool modern. The grand old lady of Mauritius resorts has regained her youth.

The hotel was established 44 years ago on the east coast of the island. It occupies a small peninsula wrapped around by 1.5 miles of white sandy beach that stretches from a calm lagoon (perfect for water skiing) to the main waters of the Indian Ocean. Even here, the water is quite gentle. A coral reef (excellent for snorkelling) acts as its protector.

Mauritius has always been a European playground. No one lived on it when the Portuguese landed in the early 16th century. The Dutch colonised it and laid out its sugar plantations, the French took over when they left, and then the British captured it during the Napoleonic Wars and ran it until independence in 1968. The result is a wonderful ethnic and linguistic hodgepodge of mainly Hindu and African descendants of workers and slaves.

They speak French, English and their native Creole. Many of them have never left the island — hardly surprising when you realise how remote it is. Flying non-stop, it’s 12 hours from London or Paris and five from Cape Town, but much longer if, as on many flights, you have to break the journey.

So why bother? At Le Saint Géran, the answer’s not hard to find. Not only are all its rooms within a hop or a skip to the sea, but everything else you could possibly want is laid on.

Like water skiing? It’s unlimited. Snorkelling? There’s a trip twice a day. Tennis? The court awaits. Dance? Live entertainment every night. Children need amusing? There’s a club for little ones, for tweens and for teens.

All these activities are free and run by staff for whom nothing is too much trouble. They pride themselves on remembering your name from the moment you set foot in the place, and they look after you assiduously. 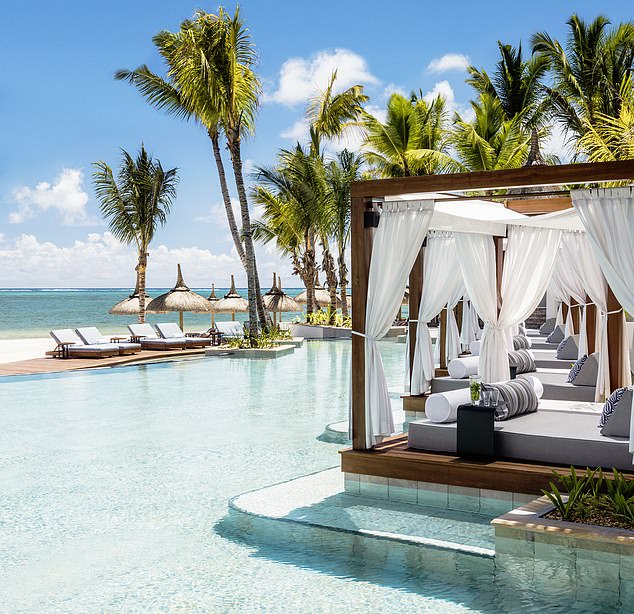 ‘I relax as soon as I get here,’ Charlie, a hard-working accountant from Worthing, West Sussex, told me. He was staying for a fortnight with his wife, Martine, and ten-year-old daughter, Erin. They came for the first time last year and couldn’t wait to return.

Martine said she’d never seen her husband so relaxed as he is at Le Saint Géran.

Watching this family enjoy their breakfast in the sunshine, it was easy to understand the appeal. A waitress brought Erin pancakes prepared just as she liked them, with fresh berries on the side.

Meanwhile, at our table, my husband was being given salted butter, which the waiter had remembered he preferred.

There’s no real reason to leave the resort, other than to pick up a bottle of booze from the local shop (the cost of alcohol at the hotel is high) or to play golf.

Le Saint Géran used to have its own nine-hole course, but this has recently been dug up to make way for villas (starting price £2.5 million freehold), which are being sold — successfully, I was told — off-plan.

There are several golf courses nearby, but a round is expensive. We were invited to play at Ile aux Cerfs (ileauxcerfsgolfclub.com), designed by Bernhard Langer. It’s a short drive from the hotel and a ten-minute cruise across a lagoon to the club’s wooden jetty, where a cart awaits to whisk you to the clubhouse. It’s a glorious place to play, with ocean views on nearly every hole. 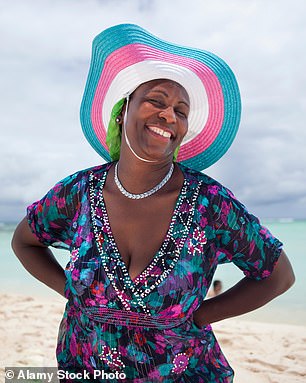 The other trip we made was further afield to another island, Ile aux Aigrettes, where the Mauritian Wildlife Foundation is helping to bring back from the brink of extinction endangered local species.

Mauritius knows all about extinction. It was once home to that icon of natural misfortune, the dodo, the flightless bird last seen in the middle of the 17th century before it was annihilated by rats and man — both killed it for food.

Today, the struggle is to preserve the giant tortoise (originally transported to Mauritius by Charles Darwin in the hope that it could survive there), the pink pigeon and a large, slow lizard called a skink.

We were introduced to all these creatures in a two-hour ramble through the island forest. Back at the resort, one shower had merged into another to create a steady tropical downpour. We lay between warm towels under our beach umbrella — it felt like being in an airing cupboard — and then were given advice from Alberto, the beach attendant: ‘No more sun today. Go to your room and drink champagne.’

Resisting the booze, we went to the spa, where we were pummelled into blissful submission with hot herbal poultices.

‘I feel like I’ve been prepared for an Ottolenghi salad,’ was my husband’s verdict, but he looked pretty content on it.

That evening, we had dinner at Prime, the resort’s signature restaurant, where the French chef Alain Ducasse was once in charge. The meal was superb: worthy of the master.

Le Saint Géran enjoys a 35 per cent return rate from its guests.

Alan and Grace from Matlock in Derbyshire came here on their honeymoon 30 years ago. Now, they return regularly with their four university-age children.

‘You can’t beat the service and the standards,’ they told me —and the fact the water skiing, which all of them love, is free.

The main restaurant buffet is also a big draw: a huge breakfast selection served until 11am and another vast range of dishes offered in the evening mean that not even the most voracious teenager need go hungry.

‘We’ve costed it,’ said Grace, a solicitor, ‘and even with the long-haul flights, a holiday here is better value for us than Spain or the West Indies.’

A long journey needs a special destination to justify it. We flew Emirates via Dubai, and were supremely comfortable all the way.

And, once there, with a beautiful room, seemingly endless beach and staff aching to make you happy, the exertions of travel were soothed away with ease.

Grace from Matlock begged me not to tell too many people about the One&Only Le Saint Géran. Sorry.