Social distancing devices given to BBC staff to ensure they follow Covid protocols are being discarded due to safety concerns and noise complaints.

Staff members at the corporation were given the devices in January and were told they will need to wear the technology to alert them if they are less than two metres apart from someone else.

The devices were designed to be worn around the neck or in the pocket and were give to journalists working on key news programmes in the corporations offices.

BBC staff have stopped using the Covid social distancing devices over safety concerns after one started smoking while other staff members claim devices are too noisy while recording. Devices were designed to ensure staff stay 2 metres apart while working in the BBC offices

The devices use technology which transmits wireless signals and they emit a noise if devices are less than two metres apart.

The devices were handed out at office building entrances from January this year.

However, sources have told the Guardian that the devices are being discarded by staff over safety concerns and noise complaints.

One source told the newspaper that a device ‘started smoking’ and had to be withdrawn from use, adding: ‘If they can’t handle daily use and start setting on fire or overheating, then they shouldn’t be here.’

Another source claimed that they made too much noise while staff were trying to record and so were not used.

The source said: ‘They get in the way of making TV … they’re so noisy, so no one used them.’ 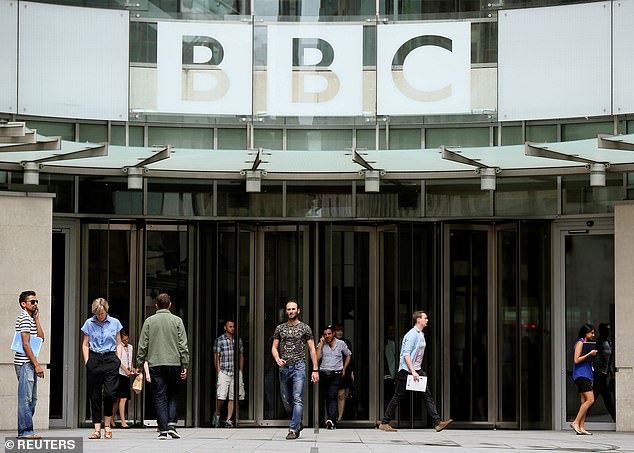 Workers in ‘key BBC locations’ were given devices which alert them if they are less than two metres apart from someone else. Pictured: Broadcasting House, the headquarters of the BBC

A BBC spokesperson acknowledged that there was a problem with one device and said the BBC was in talks with the manufacturer.

The spokesperson added: ‘We are surprised that a problem with a single electronic device is a news story, especially as the devices are being used where social distancing is challenging and they are about safety.’

During the pandemic, the BBC saw a mixture of staff working from home while some staff members continued to work at key office locations if they were in ‘service critical roles’.

The BBC said that where this was the case, Covid-secure measures were followed including social distancing.