Viewers were left hooked by dark real-life BBC drama The Serpent, but it seems the twisting storyline wasn’t the only thing that grabbed the attention of fans.

The eight-part drama, which earlier this week became iPlayer’s most watched show, has sparked a huge interest in 1970’s style clothing – with some items gaining an 158 per cent increase in searches on eBay UK.

The show tells the story of serial killer Charles Sobhraj who drugged and killed at least a dozen people on the Hippie Trail in Asia in the 1970s, with the help of his besotted lover and accomplice Marie-Andrée Leclerc.

Viewers were particularly captivated with Jenna Coleman’s Leclerc, whose wardrobe by Rachel Walsh featured the bright colours, clashing prints and flared cuts of the 70s.

Online retailer eBay UK has seen a rise in 1970s-inspired clothing after BBC drama The Serpent, which featured Jenna Coleman as Marie-Andrée Leclerc Halterneck tops became the most popular item of the series, with searches soaring 158 per cent, closely followed by print dresses at 86 per cent.

Flared trousers also proved popular with a rise of 31 per cent; while jumpsuits, printed blouses, kaftans, cat-eye sunglasses, large sunglasses and headscarves all gained an increase in searches.

Fashion Stylist to the stars, Karen Williams, who runs karenwilliamstylist, told Femail that Coleman’s character has been so popular as her style ‘sparked a sense of freedom and expression’ so separate from the restrictions Brits are currently living under.

The 70s-style items UK shoppers are going mad for

‘I don’t think we realise how much we have to thank Jenna Coleman’s 1970’s style for, in the BBC’s hit TV show The Serpent’, she said.

‘Let’s just remind ourselves that the 1970’s era was commonly associated with rebellion and freedom. Can you see where I’m going with this?

‘Undeniably what the character Andre LeClerc wears, from her flamboyant tailored flared suits to her fabulous bohemian kaftans and the clashing printed headscarfs, is a 1970s fashion masterclass on how rock this look and do it well.

‘But the timing is everything. She has given us more than just ideas on how to style ourselves this summer, but I’ll get to that in a moment, LeClec has sparked a sense of freedom and expression away from the restrictions of working from home and all the online culture a lot us are bound to.

‘She has given us excitement and hope even if it’s just rebelling through fashion, you can almost taste it in the air, a renaissance is near.’

And it’s not just fashion that the show has inspired, with 1970s-style homeware proving more popular than ever on the site.

Searches for rattan are up by 86 per cent, while coloured glass, macrame wicker chairs and shag rugs all gained traction on the site.

Sharing the essential items to invest in to achieve an authentic 70s look, Karen emphasised that simply alluding to the era could be enough when it comes to statement looks such as bell sleeves and kaftans.

‘A printed scarf, folded flat and tied around the top of the head over the hair and tied underneath – if you don’t have one of those – your partners patterned work tie will do (he’s probably not wearing that at the moment)

‘Oversized sunglasses – preferably coloured glass but not essential – I think smaller oval shaped glasses work just as well and don’t for the cat eye shape too.

‘Bell sleeves, Super fitted blazers and kaftans are all going part of it but remember you don’t have to go crazy – just a nod to the style sensation will be fine!’

Katie Eastwood, Stylist Ambassador at Stitch Fix UK, revealed that ‘countless customers’ who have been inspired by styling on the show have come to her for help in finding similar items to replicate the looks, and seeking tips on how to style the pieces. 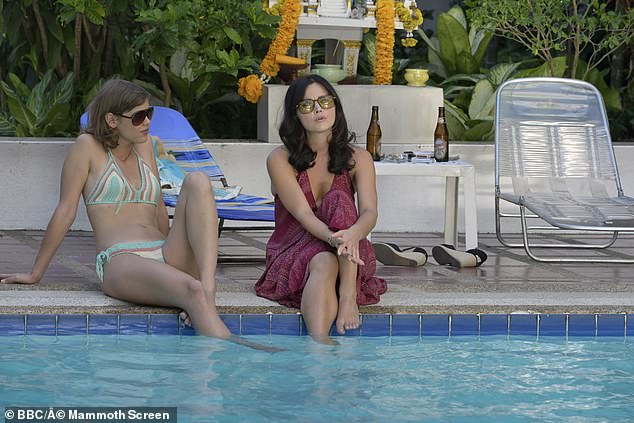 Searches for ‘halter neck top’ are up by 158 per cent while ‘large sunglasses’ are up by 63 per cent. Pictured, Coleman as Leclerc in the drama 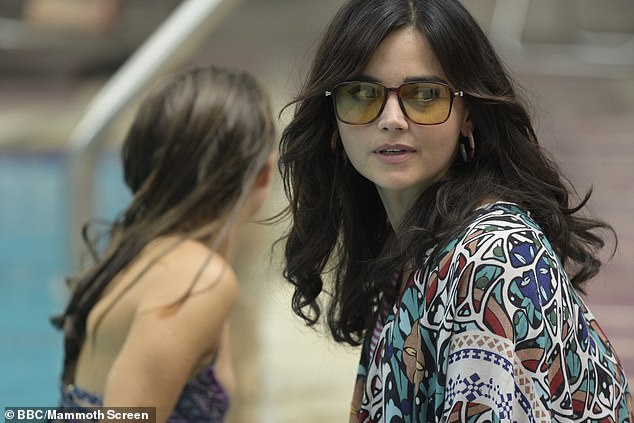 ‘One of the easiest looks to recreate from the show is the slick tailoring’, said Katie, ‘Try pairing a brightly coloured suit, for example a teal two-piece from Mango, with a floral blouse from Scotch & Soda or Petite Mendigote.

‘Be sure to lift the collar above the jacket lapel for a real 70s statement and the job’s done. The key here is colour and prints – the brighter, the better, and the more 70s you’ll look and feel – it also makes for an attention-grabbing work outfit for Zoom!

‘If you’re not ready to be quite so daring, stick to the statement trouser only and opt for a simple white blouse, not forgetting to throw on a pair of oversized sunglasses, statement earrings or a striking headscarf to add an additional nod to the 70s – a great tip as we head into spring.’

Who was Marie-Andrée Leclerc?

In the Spring of 1975, Sobhraj met Marie-Andrée Leclerc, a medical secretary travelling India, and he acted as her guide of the country.

Sobhraj had been financing his lifestyle by posing as either a salesman or drug dealer to impress tourists, who he then drugged, robbed and often murdered.

Three months later Leclerc flew to Bangkok to meet him after months of him seducing her with love letters – turning blind eye to his philandering with local women.

Besotted, Leclerc became intwined in Sobhraj’s vicious crime spree, and would help him drug tourists to steal their passports and money

Marie-Andrée Leclerc was accused of complicity in the murders, namely those of Jean-Luc Salomon and Avoni Jacob.

In 1980, she was convicted of the murder of Avoni Jacob, though she has always denied involvement in the killings, and was later released on the condition she remained in India.

She returned to Canada to die of cancer in 1984.

‘Speaking of trousers, another key item I look to include in my customer’s Fix, if they’re looking to don a retro look, is a pair of flared, indigo jeans – possibly the most iconic denim style, and one that will instantly transport you back to the 1970s.’

Sobhraj, known as The Serpent, drugged and killed at least a dozen Westerners on the Hippie Trail in Asia in the 1970s.

The criminal financed his lifestyle by posing as either a salesman or drug dealer to impress tourists, who he then drugged, robbed and often murdered.

By 1975 the killer was joined by Ajay Chowdhury, a young indian man who would help him scam tourists by helping them out of situations he had caused, for example providing shelter to victims he had poisoned.

While he claimed that murders were often accidental drug overdoses, it was later alleged by investigators that his motive for murder was silencing victims who threatened to expose him.

In 1976, Sobhraj attempted to drug a group of 60 French students on holiday in New Delhi in an attempt to rob them of passports and cash by giving them sleeping pills disguised as antibiotics.

But this time it backfired when the poison began working a lot faster than he expected. When the first few students began falling where they stood, the others became alarmed and called the police. He was sentenced to 12 years in prison.

But before his sentence was due to end in 1986, he threw a party for the guards and drugged them with sleeping pills to escape, only to be arrested in Goa following a nationwide manhunt by police in India.

He knew that there was a warrant for his arrest in Thailand, where he could face the death penalty, and banked on being locked up in India for another decade.

His plan worked and when he was released in 1997, with no country to extradite him to, the Indian authorities allowed him to return to Paris where he lived in luxury promoting his infamy.

A sighting of Sobhraj in Kathmandu in 2003 led to his arrest for the murders of two Canadians there in 1975.

A Nepali court sentenced the notorious criminal to life imprisonment in connection with the killing of an American backpacker in 1975.