Ruth Wilson was in a candid frame of mind as she spoke of how she tapped into past relationships to understand the psychology of infatuation.

‘Why do we fall for someone that isn’t necessarily right for you?’ mused the 39-year-old star of The Affair and Mrs Wilson. ‘When you’re infatuated with someone — when you really fancy someone — it takes over your whole body. It takes over your every waking thought. lt’s obsession!’ she declared.

The actress and the film’s director Harry Wootliff, along with writer Molly Davies, reshaped the book’s diary-like structure and created a screenplay which she described as a ‘universal experience of infatuation’ — a subject also at the heart of her chilling portrayal of psychopath Alice Morgan, opposite Idris Elba in Luther.

She told me she became involved in True Things at a very early stage. She and Jude Law were working together on Eugene O’Neill’s Anna Christie at the Donmar Warehouse more than a decade ago, when Law’s production company was sent Davies’s book — and Wilson was asked to have a read of it.

She and Law joined forces and acquired an option on the screen rights. Later, the British Film Institute and BBC Film also became involved.

Wilson said what she loved about the book was that it felt ‘incredibly feminine and truthful’ — and this was before the Fleabags of this world came to the fore.

The story focuses on Kate (who isn’t named in the book), who works in a benefits office. Day after day she’s subjected to abuse from clients until one day, a man (played by Tom Burke) waltzes in and upends her life. 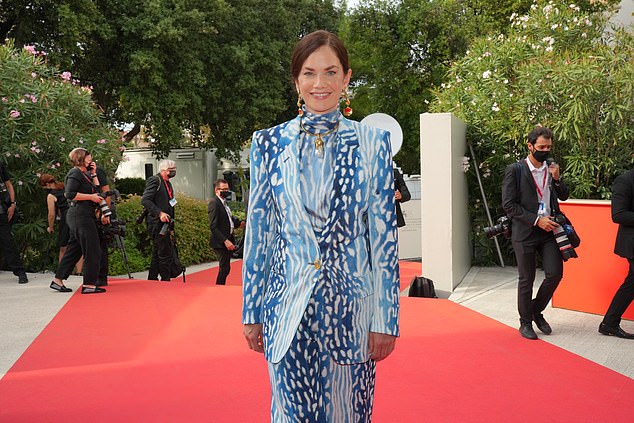 Ruth on the red carpet for True Things

‘She objectifies him and calls him The Blond,’ Wilson said. ‘And she has to have him. When The Blond comes in, he’s got to look sexy and attractive… and dangerous and alluring,’ Wilson told me, adding that it’s Kate who chooses to chase after him. ‘She’s not a victim. She goes for him.

‘He gaslights her, doesn’t behave very well — but she’s choosing not to listen to those warning signs, and she continues to pursue.’

As awful as Kate’s experience is, there’s a sense that at some point we — all of us — need to go through a car-crash relationship in order to understand what it is we really want.

During pre-production, while trying to flesh out both Kate and The Blond’s characters, Wilson and Wootliff ‘would speak about relationships we’ve had where you’d sort of be infatuated with someone and then suddenly the veil would lift one day. That instant where you’d think: ‘What is that about?’ 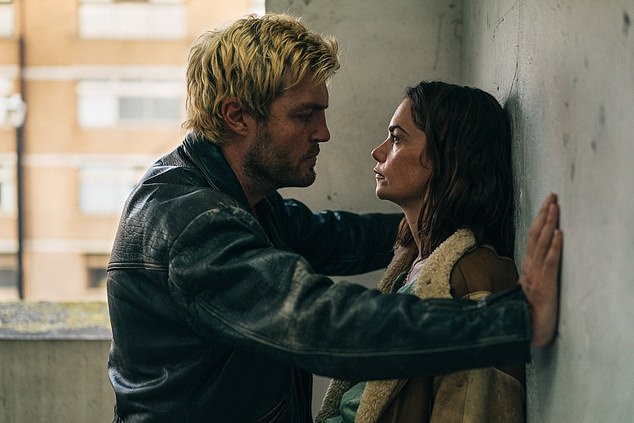 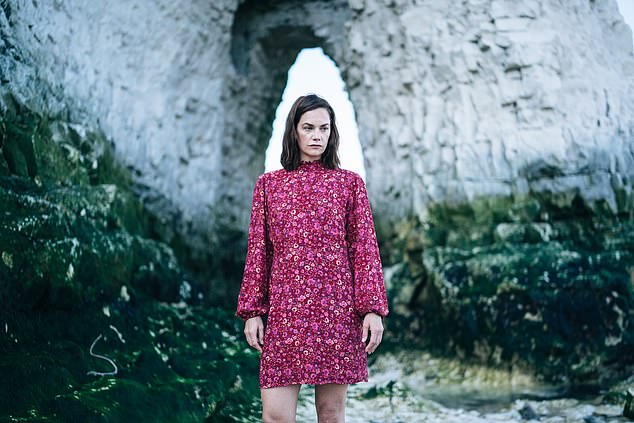 ‘It’s interesting that two women — Harry and me — should decide who this man should be,’ she said. ‘And then Tom (Burke) came in and brought his own complexity to him.’

True Things was screened at the Venice Film Festival this week (it will also get an outing at the London Film Festival next month). Wilson and I had met for a chat in a shaded section of the Tennis Club Venezia. She was wearing a Nina Ricci top under a swanky suit designed by The Frankie Shop (she modelled another eye-catching suit, by Schiaparelli, on the red carpet that evening).

In True Things, Kate comes from a ‘nice’ middle-class family — though Wilson insists the film isn’t a judgment on ‘comfortable upbringings’. ‘It’s about a woman trying to break from the confines of her life. She knows she’s a bit different from the world in which she was raised.’

Wilson said she could sympathise. ‘I certainly know that from my point of view, I definitely am different from the rest of my family.

‘So no matter how loving they are, and how much you love them too, you can still feel that you don’t quite fit in,’ she sighed. How different is she from her siblings, who are in the teaching profession, I wondered?

She retorted that they’re all ‘responsible’; they have kids;. As a result their lives are regimented by the school year whereas she rarely knows ‘what day of the week it is’.

‘And I pretend to be someone else every day! But there are lots of ways in which we’re similar.’ She laughed, adding: ‘Some of them are much more flamboyant than me.’

True Things is just one of several projects Wilson has on the go, including Oslo, director Bartlett Sher’s film of J.T. Rogers’ hit play about the secret talks between Israel and the Palestinian Liberation Organisation, which also stars Andrew Scott.

No love, actually, for Rodrigo in Brazil

Rodrigo Santoro, who was office worker Hot Karl (below) in Love Actually, had to tough it out and be ‘vicious’ to play a man living off the spoils of human trafficking in his new film 7 Prisoners.

‘I love the fact that I wasn’t an obvious choice,’ Santoro said of his role in director Alexandre Moratto’s film, in which he plays the overseer of a junkyard in São Paulo.

The Brazilian-born actor, who said he is proud of his part in the 2003 romantic comedy classic, wasn’t sure if he wanted to tackle a character as cruel as Luca in 7 Prisoners (right).

He explained that he found it difficult going home to his four-year old daughter at the end of each day, having spent hours under the skin of this loathsome man.

‘But then I thought: there’s no redemption for this dude. Just play him!’ 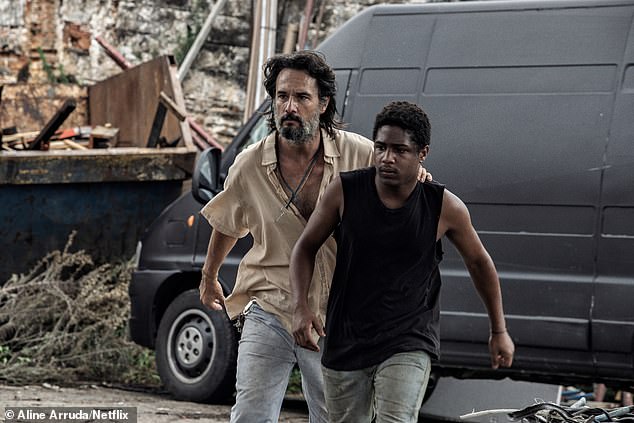 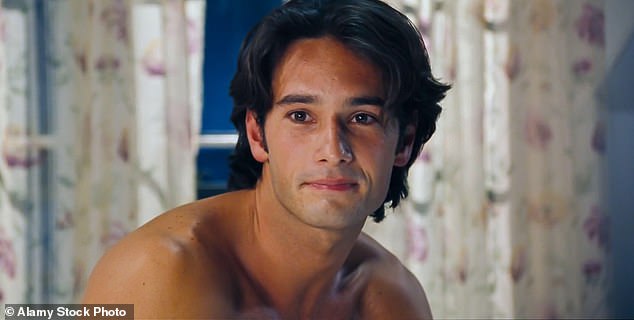 Rodrigo Santoro in a scene from Love, Actually

Santoro, who also starred in Westworld and the two 300 epic films, said he’d like to play more romantic parts.

‘The good ones are hard to find,’ he told me at a soirée at the Excelsior Hotel on the Venice Lido.

7 Prisoners is a fascinating film about how to survive the atrocious conditions these young men are forced to work in.

The Netflix film was shown at the Venice Film Festival.

The film — featuring musical numbers — begins principal production next month in London, with Paul King (who made the delightful Paddington movies) directing.

It would be easier to navigate a wild molten chocolate river than get information out of the studio, but from what I heard here in Venice (where both Colman and Chalamet had films at the festival) she plays some sort of corrections officer. 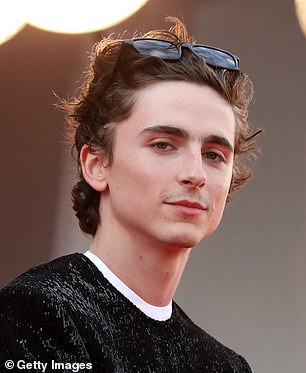 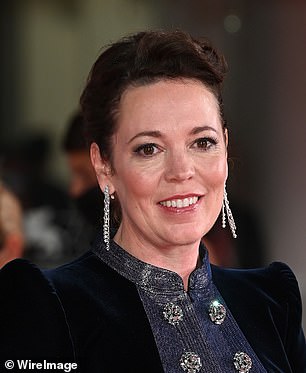 And two of her charges will be played by American funny man Rich Fulcher — and Jim Carter, aka Mr Carson in Downton Abbey.

Colman is great, by the way, in her Festival picture The Lost Daughter; while Chalamet stars — apparently — in Dune. Though with all that sand, it was kind of hard to tell!

Laure Calamy, who leads an engrossing film called Full Time, about a single parent, residing in a Paris suburb with her two children, who works as a head chambermaid at a five-star hotel.

Her carefully calibrated schedule goes haywire when public transport workers go on strike. The film got a heartfelt reception at the festival screening I attended. 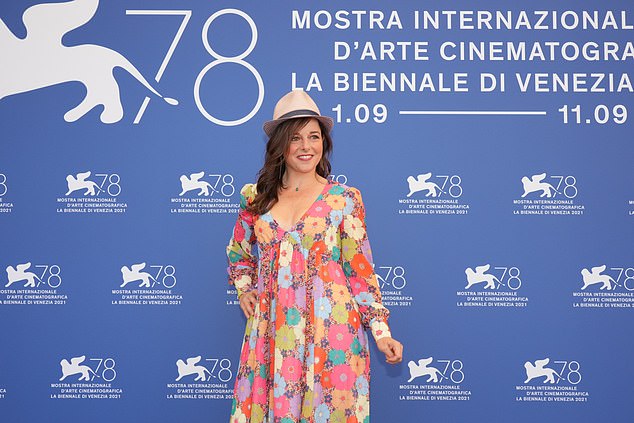 Readers of this page will recognise Calamy as the loyal Noemie Leclerc in Call My Agent, a huge success on Netflix.

The actress revealed that a feature film version of that is ‘going to happen’. It’s just a question of when.