Dianne Pilkington was first bewitched by witchcraft when she was growing up in West Lancashire.

And that fascination should stand her in good stead when she tackles the most sought- after musical role in years: trainee witch Miss Eglantine Price in upcoming musical Bedknobs And Broomsticks, a part first made famous by Angela Lansbury in the 1971 film.

The story follows the three Rawlins children, who are evacuated from London and billeted with the eccentric Miss Price. Just how eccentric becomes apparent when they spot her trying out her new besom broom . . . way up in the sky at night.

Many adventures ensue, culminating in the children helping Eglantine to foil an invasion.

Pilkington is at pains to point out that she’s playing Miss Price — and not legendary Dame Angela, who was signed to play the student sorceress while another Disney Dame, Julie Andrews, was hemming and hawing over the part.

‘I am not Angela Lansbury,’ the actress, whose own, impressive 20-year career has included playing Belle in Beauty And The Beast; Donna in Mamma Mia!; and Raquel in the stage version of Only Fools And Horses, said firmly. ‘So it will have to be something that comes from my version of Eglantine.’

Her take on Miss Price is that while she believes in the spells she receives from Professor Emelius Browne’s witchcraft correspondence course, ‘she is always slightly surprised when they work’.

The creative team — led by co-directors Candice Edmunds and Jamie Harrison; writer Brian Hill, and Neil Bartram, who devised new music and lyrics simpatico to songs created for the picture by brothers Richard M. and Robert B. Sherman — will adhere to the original children’s books by Mary Norton, as much as to the film inspired by them.

Growing up in Wrightington near Wigan, Pilkington said she was fascinated by tales of the 17th-century witch trials in Pendle, on the other side of the Ribble Valley. ‘They’re in my blood,’ she told me.

‘If I read a novel, I’m drawn to something of that ilk — and films like that.’

The actress, who’s married with one child (eight-year-old Hugo), even has professional form as a witch, having played Glinda in Wicked in the West End (though Glinda never had to hop on a broom).

We were chatting on the second day of pre-rehearsals for Bedknobs, at Canary Wharf. All the cast and creatives were there. And co-director Harrison was clearly a happy man. ‘It’s just so thrilling to be back in a room and not theorising any more,’ he sighed. 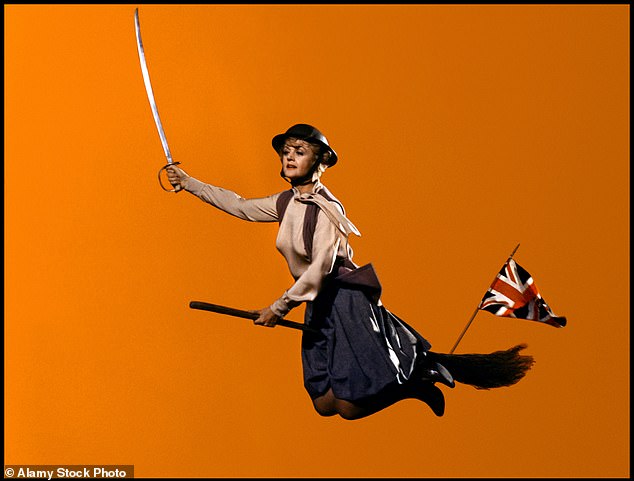 There were still concessions to Covid. I wasn’t allowed through the door without a negative test. But enough of the burdensome but necessary protocols that rule our lives.

The real question is: can Eglantine Price achieve lift-off on her broomstick? ‘We’ve had a look at flying already,’ Pilkington said seriously, before breaking into a big smile. ‘And . . . it’s really fun!’ But no aerodynamic secrets will be revealed until producers Michael Harrison and Thomas Schumacher (president of the Disney Theatrical Group) premiere the show at the Theatre Royal, Newcastle upon Tyne, on August 14.

After that, it will head off on a 26-venue tour, ending at the Belfast Opera House next May. And there is already chatter about a West End run after that.

Harrison told me that Pilkington took to broom-powered flight ‘like a duck to water’. And there has clearly been much discussion about the etiquette. ‘Step two of broom flying,’ Pilkington said, tongue firmly in cheek, ‘is always take an elegant, sideways stance.’

In principle, perhaps. But not in practice.

‘The practicality of flying with any kind of proficiency means she’s going to have to find several positions on that broom!’ she conceded. ‘I think the costume department have been very sensitive to that.’

Co-director Edmunds seconds that emotion. ‘We have a very modern Eglantine, and she’s going to sit on the broom like a modern woman would!’

In any event, Eglantine has to be in control as she leads the charge from on high, while singing the big number Onward (written by Bartram), after activating the Substitutiary (six syllables, otherwise the magic doesn’t work) Locomotion Spell that animates inanimate objects. 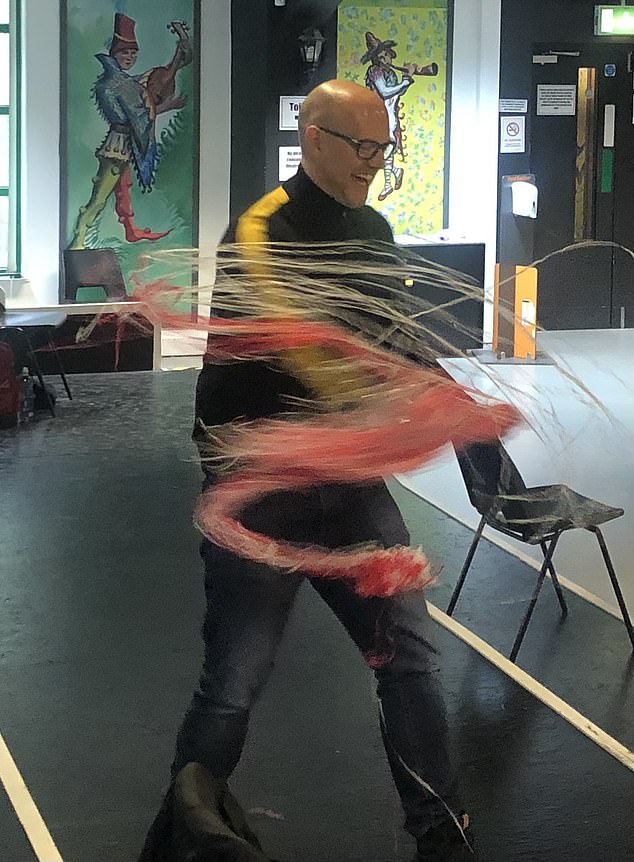 Harrison, who created the illusions for Harry Potter And The Cursed Child, explained that the show’s magic is conjured up out of the imaginations of the children: Charlie, Carrie and Paul (keeper of the enchanted bedknob that enables the bed to fly).

The co-director said the cast is going to help with the tricks and illusions, to give the appearance of them being ‘handheld, rather than technological’.

To demonstrate, quick as a flash, he clicked a tiny device concealed in the palm of his hand — and 20 ft streamers shot out over the company, like octopus tentacles.

Pilkington announced that she would be practising her skills on her son at home. ‘Rabbits,’ she said, mysteriously.

Audiences fell in love with Toni Collette in her breakout film, Muriel’s Wedding, back in 1994. And now Collette has fallen head over heels for her co-star Beau in the film Dream Horse.

The handsome chap plays the title character in some of the movie’s quieter scenes.

‘I’m in love with Beau. He’s my acting dream!’ the Australian-born actress said, contradicting W.C. Fields’ maxim that you should never work with children or animals. ‘He looks at me, totally connects and knows what to do.’

In the film, Collette plays Jan Vokes, a woman working three jobs — as well as caring for her invalid husband and parents — who sets up a syndicate in a Welsh village to buy and train an unlikely racehorse. 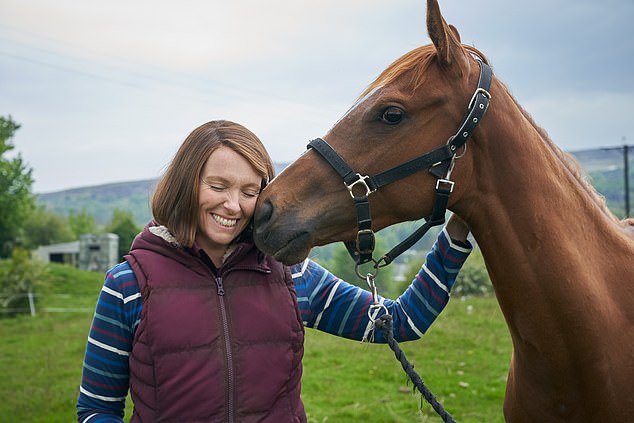 Toni Collette has fallen head over heels for her four-legged co-star Beau in the film Dream Horse, calling him her ‘acting dream’

The story is true and the horse — Dream Alliance, to give him his professional name — went on to win the Welsh Grand National.

She said it was ‘quite profound working with him [Beau], because he’s gentle and mellow’.

That might have something to do with the fact that once, a long time ago, ‘I was dragged along the beach with my foot stuck in a stirrup. Luckily, there was sand, so I escaped serious injury.’ But on the flip side, she also had what she called a ‘spiritual moment’, when she was on a friend’s property in Ireland, and was surrounded by a herd of wild horses, 30 strong. ‘It was like we were all sharing this same vibe,’ she recalled.

Collette — whose many other film credits include Knives Out, About A Boy and The Sixth Sense — made the Warner Bros and Film4 production, which is directed by Euros Lyn, in and around Rhymney in South Wales. Owen Teale, Damian Lewis and Sian Phillips also star in the picture, which opens in cinemas today.

Meanwhile, Collette has just signed on to appear with Colin Firth, Juliette Binoche and Sophie Turner in new HBO Max crime drama The Staircase, based on a real-life murder mystery and set in North Carolina.

Page was able to stage her passionate piece on the Royal Opera House stage, and she uses the space expertly to explore, in dance form, some of the pent-up female rage that we also witnessed in Emerald Fennell’s Promising Young Woman.

Lyssa, directed by Anthoula Syndica-Drummond, can be viewed for free from today via roh.org.uk as part of the Royal Ballet’s Our House To Your House season. 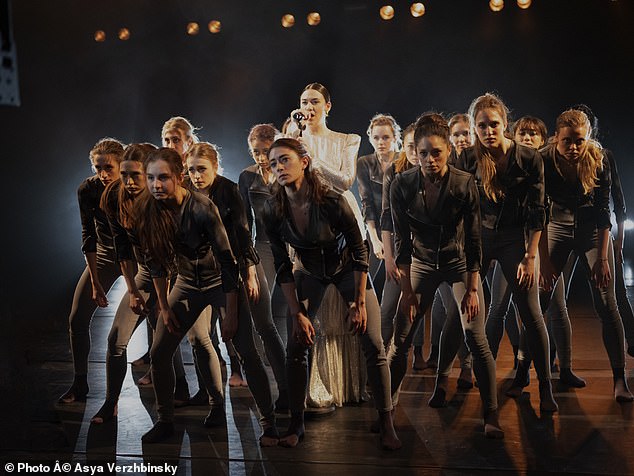 The powerfully eloquent film is inspired by the book of the same name, which Naoki Higashida wrote in 2007, when he was 13, to try to explain what was going on in his mind and the minds of others like him.

A parent of a British teen tells how, for their child, ‘the chaos of the world has to be put into some kind of coherent order’.

That’s just one of the many reasons you should see the Picturehouse Entertainment release in a cinema from June 18.

Everybody’s Talking About Jamie, a poignant firecracker of a movie, will have its premiere at the Frameline Film Festival in San Francisco on June 12.

It’s a blow for the people of Sheffield — where the film starring Max Harwood, Richard E. Grant and Sarah Lancashire is set — who were promised the first screening.

No doubt something will be arranged for the city before the picture streams on Amazon Prime from September 17.