Employees at Stanford Health Care and Lucile Packard Children’s Hospital in California will walk out at 7am on Monday.

Union bosses said the hospitals were ‘still not listening’ to employees, and they were left with little choice after more than three months of negotiations.

More than 8,000 employees at Sutter Health went on strike for eight hours on Monday, amid a growing movement among staff after two brutal years of Covid.

The strikes come after a survey revealed half of U.S. nurses are now facing more violence at work now than a year ago, with chronic understaffing and Covid misunderstandings the primary drivers of the uptick.

More than 8,000 nurses walked out of 15 hospitals run by Sutter Health yesterday, amid demands for more staff and better pay. Pictured above are some of the protesters 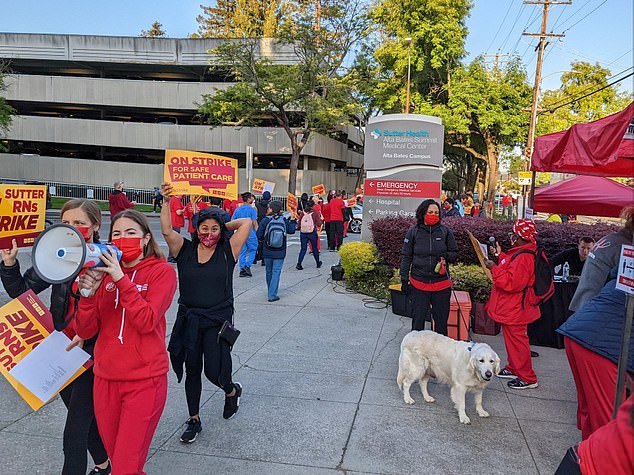 Pictured here are nurses who walked out of one of Sutter Health’s hospitals yesterday. The hospital has said they cannot return for five days, as extra staff have been brought in 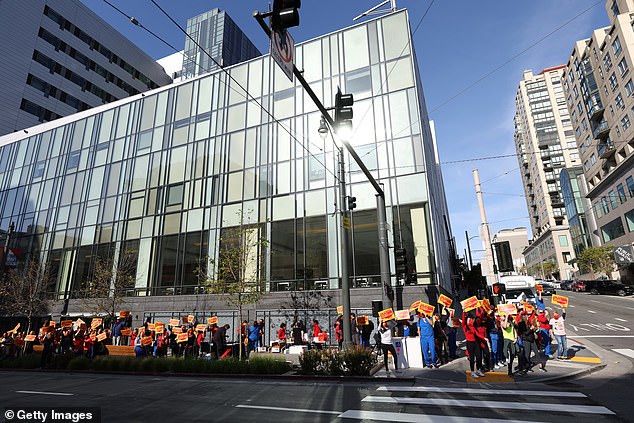 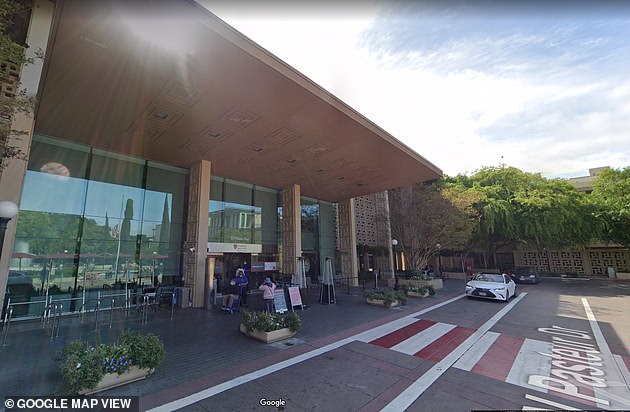 More than 5,000 nurses at two hospitals in Palo Alto run by Stanford Health Care are also preparing to walk out of wards. They are calling for better pay and staffing levels

The Committee for Recognition of Nursing Achievement (CRONA) called the strike at the Stanford hospital and Lucile Packard, in Palo Alto — just outside of San Francisco —, after nine in ten of its members voted for the action.

The union — representing 5,000 nurses — was negotiating for more than 13 weeks over improving nurses pay, and a health and wellness offer and to tackle chronic staffing shortages.

Half of nurses in the U.S. are now battling against violence on wards, one of the largest nursing unions in the country said today.

In its bi-annual survey, National Nurses United found more than 48 per cent of nurses said they were facing a small or significant spike in violence at work.

This was more than double the 21 per cent that said there were more assaults in their hospitals in March last year.

Cases included patients spitting on nurses after being told they had tested positive for COVID-19, and scratching, hitting or even threatening healthcare workers with firearms.

Hospitals have been facing surging rates of patients attacking staff in recent months, fueled by Covid misinformation and staffing shortages.

Unions are calling for stronger protections for healthcare staff, warning the surge of attacks is leaving many ‘distracted’ and unable to do their jobs.

Up to 40,000 nursing jobs are already vacant in California, estimates suggest, equivalent to one in ten positions.

Charon Brown, a nurse in the hospital’s heart unit and CRONA member, said striking was a ‘last resort’ but that Stanford was ‘refusing to take our wellbeing seriously’.

‘Nurses are exhausted and we’re burning out,’ she said.

‘We need contracts that give us time to rest and recover, mental health support, and wages and benefits that take care of us and our families.’

Stanford Health Care has told striking nurses that they will not receive pay for missed shifts.

Those who remain on picket lines at the start of May will also lose their health benefits.

But CRONA bosses have slammed this as ‘cruel’ and ‘immoral’, with president Colleen Borges saying: ‘Health benefits should not be used against workers, especially against the very healthcare professionals who have made Stanford a world-class health system.’

Stanford says its hospitals will remain open throughout the strike, and that it has employed replacement nurses to ensure patient care is ‘uninterrupted’.

Last year it was ranked as the fourth best hospital system in California, and the 12th best across the country.

The one-day strike by nurses at 15 Sutter Health hospitals was called by the California Nurses Association after talks over staffing shortages and health and safety provisions ended in deadlock.

The health system has now told nurses not to return until next Monday, because it has brought in travelling nurses to cover the shifts.

Hospitals involved in the strikes were in cities including San Francisco, Berkeley, Oakland, Santa Cruz and Vallejo.

She also warned that many nurses were exhausted from working 12-hour shifts at the hospital, and that morale on the wards was low.

The U.S. is facing a growing nursing crisis amid mounting staffing shortages across its hospital and rising levels of violence faced by workers.

A national survey conducted by National Nurses United found 48 percent of nurses are facing more violence at work this year than they had previously.

More than seven in ten nurses added that their job was slightly or much worse than before the Covid pandemic, while 80 percent said it was more stressful.