Barratt Developments has announced a share buyback programme worth up to £200million as its chief executive hailed a ‘year of fantastic progress’.

Leicestershire-based Barratt, which is Britain’s biggest housebuilder, told investors it had hired Credit Suisse to initially purchase up to £50million this year before completing the remaining amount of purchases by the end of June 2023.

The group has also hiked its recommended final dividend to 25.7p per share, having increased payments to shareholders by more than fourfold to £337million in the last financial year.

Barratt’s publication of its annual results comes as figures from Halifax bank showed average house prices in the UK rose to a record £294,260 in August

High demand for newly-built properties, coupled with a surge in prices, helped the FTSE 100 company to achieve record adjusted pre-tax profits of £1.05billion for the 12 months to 30 June.

It finished construction on 17,908 homes during the period, which was just ahead of pre-pandemic levels, as Britain’s property market continued to be affected by low mortgage rates and chronic undersupply.

These factors helped the average selling prices of Barratt homes hit the £300,000 mark, as did the temporary stamp duty holiday and a growing desire among Britons to live in more spacious housing.

CEO David Thomas said: ‘This has been a year of fantastic progress, with completions recovering to pre-pandemic levels and excellent productivity across our sites.’

Barratt’s publication of its annual results comes as figures from Halifax bank showed average house prices in the UK rose to a record £294,260 in August, an 11.5 per cent year-on-year increase.

This was despite the Bank of England upping interest rates for the sixth consecutive occasion last month in response to surging inflation. 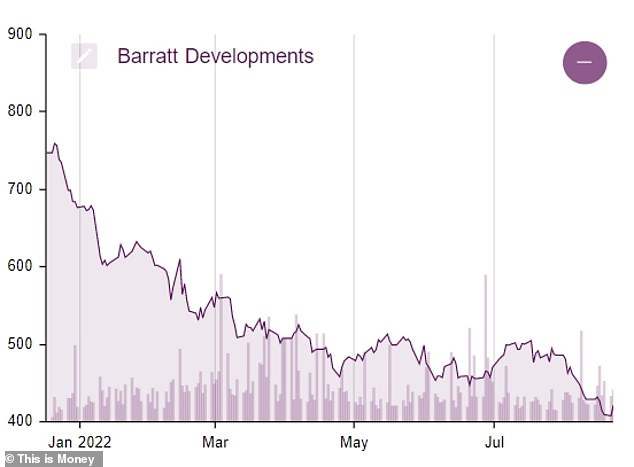 Decline: Barratt Developments shares have fallen by 44 per cent since the start of the year

Even as housing costs continue to grow, analysts are predicting that the worsening cost-of-living crisis affecting British consumers will eventually have a knock-on impact on the property market.

Richard Hunter, head of markets at Interactive Investor, said: ‘Rising interest rates could impact consumer confidence, and there are also some signs of a cooling market in terms of house prices.

‘The withdrawal of the Help to Buy scheme in its current form could also hamper demand, even though mortgage availability remains high.

‘Higher household energy costs, which could receive some relief from the new Prime Minister, are also a bugbear at present, as is the wider inflationary environment.’

Barratt said that economic uncertainty was partly behind its net private reservation rate per site from the start of July to late August falling to 0.60, against 0.70 in the equivalent pre-pandemic period.

Yet the company is targeting a further 18,400 to 18,800 home completions this fiscal year, while its forward order book stands at £3.81billion, roughly the same as it was  in August 2021.

Barratt Developments shares were down 0.9 per cent to 418.5p during mid-morning on Wednesday, meaning their value has declined by around 44 per cent since the start of the year.