Barnaby Joyce’s fiancée has given a bombshell account of the tumultuous times after their affair was made public, with his secretly-pregnant former staffer fearing she would give birth alone and forced to ‘walk away’ from judgmental friends.

Vikki Campion, who is 18 years the Nationals leader’s junior, gave birth to their Sebastian in 2018 and second son Thomas a year later, after a very public affair that saw Mr Joyce forced to step down as deputy prime minister.

Despite a rocky start, the pair got engaged last week at the Latitude 30 restaurant in Coffs Harbour, with Ms Campion comparing their relationship to a ‘great love throughout history’.

It hasn’t always been smooth sailing, with Ms Campion, 36, admitting their romance ‘wasn’t perfect’ – but insisting she doesn’t regret the drama surround their infidelity.

‘Even until the day he said in Parliament that I was his partner, I didn’t believe it to be accurate. He said he would be there in the labour ward and I didn’t believe that either,’ she wrote in a column for the Daily Telegraph.

The mother-of-two explained that after a whirlwind of ‘twisted mistakes’ and ‘humiliation’, she was forced to ‘walk away’ from friends before they could ‘exile’ her.

‘You swap your job for harsh stares, paparazzi and paranoia, schoolyard ­rumours cooking up in Ultimo newsrooms, many without a yolk of truth and you stop answering the door,’ she went on.

‘He has asked me a thousand times: “Would you go through it all again?” And my answer has always been yes.’

In December, 2017, Mr Joyce used the parliamentary debate on same sex marriage to confirm he was no longer with Natalie, his ex-wife of 24 years, with whom he shares four daughters.

News of Mr Joyce, 54, and Ms Campion’s relationship hit the headlines in February 2018 after photos emerged of his former staffer heavily pregnant in the Daily Telegraph. 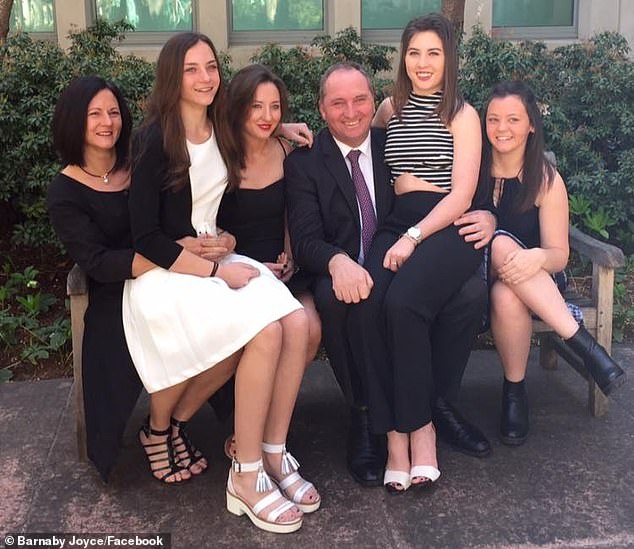 In December, 2017, Mr Joyce confirmed he was no longer with Natalie, his wife of 24 years, with whom he shares four daughters (pictured)

Mr Joyce subsequently resigned as deputy prime minister and Nationals leader and moved to the backbench, amid pressure to quit due to the relationship and after an unrelated sexual harassment allegation was made against him, which he has strenuously denied.

Then-PM Malcolm Turnbull described the affair as a ‘shocking error of judgement’.

As the scandal erupted, Ms Campion also left her position at Mr Joyce’s office in April, the same month she gave birth to their first son.

The couple welcomed their second son Thomas in June the following year.

Ms Campion said her husband-to-be made her cry with his proposal last Sunday night during an intimate dinner.

She explained how he pretended to drop his phone at the table, and then while down there, proposed on both knees. 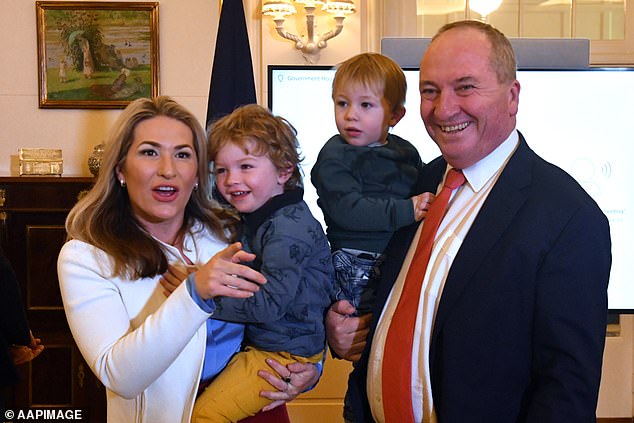 Ms Campion said they had ‘sacrificed’ a lot for their ‘great love’, which led to the end of his 24 year marriage to the mother of his first three children.

She then said other people give up this kind of love for a ‘dull, safe, vanilla version of comfort.’

Mr Joyce had been planning on proposing to Ms Campion in tropical north Queensland but was delayed after catching Covid during a trip to the US, with subsequent attempts also being thwarted by the pandemic.

Following the revelations about the pair’s affair, Mr Turnbull introduced bans on MPs having sexual relationships with their staffers.

Mr Joyce and Ms Campion then appeared in an exclusive interview with Channel Seven, rumoured to have earned them $150,000. 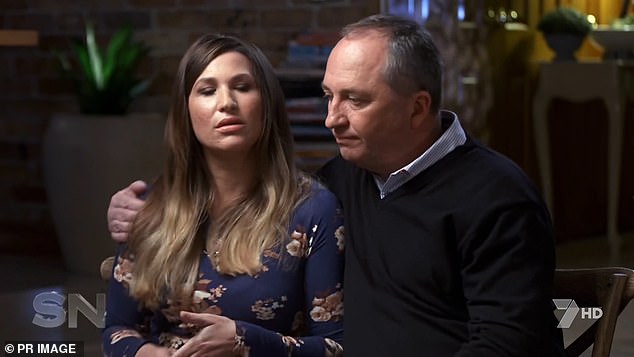 Mr Joyce and Ms Campion appeared in an interview with Channel Seven’ Sunday Night back in 2018, rumoured to have earned them $150,000 (pictured)

Mr Joyce accused people of acting ‘unAustralian’ in their pursuit of the story.

‘I thought that’s not who we are in Australia,’ he told the network

‘That’s not the kind of people we are. I’m the public figure, go after me.’

Mr Joyce said Ms Campion has made him a ‘better person’ but admitted if she’d said no he’d still be at the restaurant where he proposed ‘getting smashed’.

‘She is really happy, I am really happy and I guess the boys are happy, but they are just the same, no change there really,’ he said.