Young girl’s terror when she’s attacked by an off-leash dog as her panicked mother tries to scare it away: ‘I’m going to die!’

CCTV has captured the terrifying moment a dog lunged at a little girl walking with her mum – leaving her fearing for her life.

Nadia Taoube and her seven-year-old daughter were walking home from the shop in Bardwell Valley in Sydney’s south on Sunday when an off-lead dog they’d never seen before in their neighbourhood crossed their path.

The footage shows the frightened girl trying to avoid a confrontation with the aggressive looking dog but she is repeatedly bowled over and pinned to the ground.

A frantic Ms Taoube tries to intervene by shooing and pulling the dog away but is unable to calm the animal.

The commotion alerted brothers Mohamed and Billy Zahr, who rushed outside to  help.

‘It was just going at her … she was screaming and crying,’ Billy told Seven News.

‘I even ran away from it … I came out to be a hero and ended up being the victim.’

Mohamed added: ‘As soon as I started running I could hear the screaming … she looked so terrified.

One of the men managed to pull the dog away by grabbing it by the ear with the animal last seen fleeing towards a nearby park.

The girl’s parents said their daughter escaped with minor scratches but remains shaken by her harrowing ordeal.

The family wants answers as to why the dog was roaming the streets off-leash.

Bardwell Valley is part of Bayside Council, which encourages residents on its website to report dog attacks.

A dog is considered a nuisance if it is habitually at large or repeatedly runs at or chases any person, animal or vehicle, according to the council website.

The best way to prevent a confrontation with a dog is to turn sideways, according to experts.

‘Turning your back and running is going to stimulate that excited response,’ dog behaviourist Elliot Mason said. 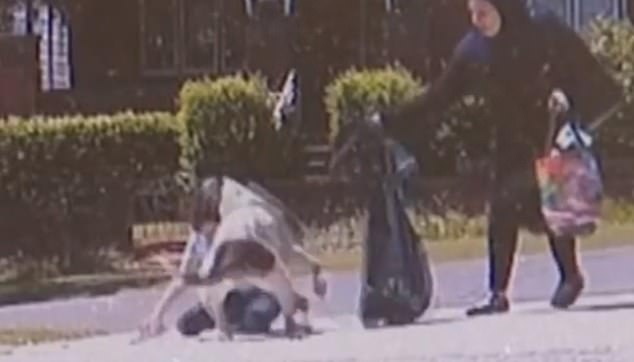