Barcelona president Joan Laporta is a fan of Andrea Pirlo and has the Italian in the frame should Ronald Koeman be sacked, according to reports.

Pirlo endured a nightmare rookie managerial campaign last year with Juventus in which his side scraped a fourth place finish to avoid falling out of the Champions League.

While his reputation took a hit for that ill-fated spell in charge in Turin Pirlo is reported to have admirers in Barcelona with Laporta chief among them, according to Catalunya Radio. 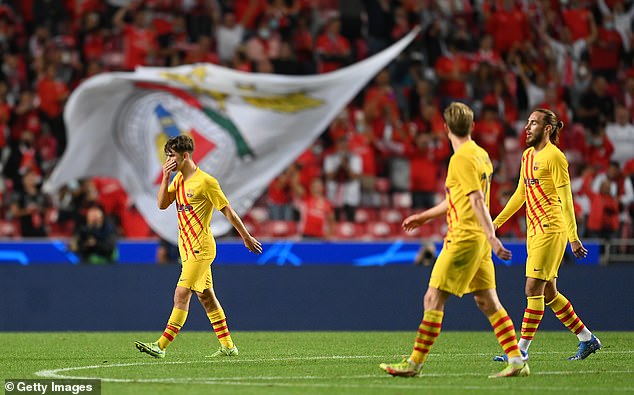 Along with Roberto Martinez and Xavi Hernandez, both of whom have been routinely linked with the hot-seat at the Nou Camp, Pirlo’s name has now intriguingly entered the mix.

Pirlo is a free agent, unlike Martinez and Xavi, and has immense pedigree in the game as a player, representing Inter Milan, AC Milan and Juventus in his career.

He represents a cheaper hire, which would be key if Koeman is to be replaced given the club’s perilous financial situation.

In his one year at Juventus, the Italian was often criticised for regularly fielding an ineffective midfield, while his unwillingness to make tactical changes during games would result in an alarming number of draws and defeats which would no doubt concern supporters if he was chosen by Laporta. 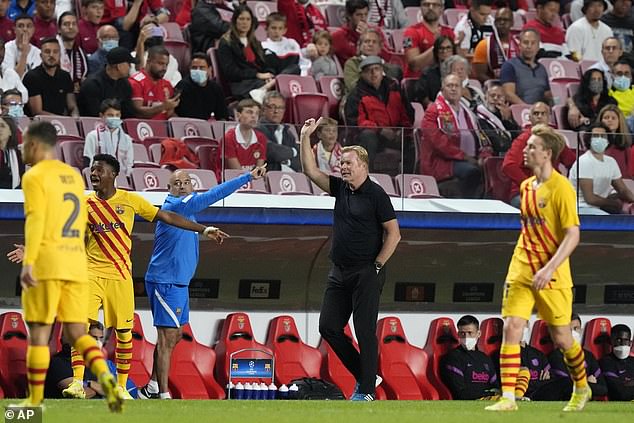 While no decision was taken immediately after the game a nightmare fixture list that sees Barca face Atletico Madrid next before games against Valencia, Dynamo Kiev and El Clasico with Real Madrid, Koeman’s time could prove to be up.

Diario AS added in their own report that Koeman now appears ‘doomed’ after successive 3-0 losses in the Champions League this season.

Laporta and Barcelona’s directors ‘do not believe in him’ and the harshness of his debrief with the players is believed to have irritated certain members of the dressing room.

Financial restraints have always complicated Laporta’s desire to replace Koeman. The club would have to pay him around £10.4million (€12m) and because they are outside the limits of LaLiga’s financial fairplay they are subject to a special rule that means they can only bring in new players (or a new coach) for a quarter of the cost of those leaving.

There is leeway in the way these league rules are applied but it could mean that if Barcelona lost Koeman who earns around £6.9m (€8m) they would only be able to bring in a coach for around £1.7m (€2m).

Darwin Nunez, who scored a famous brace, converts his first of the night with a tidy finish

Asked if he felt he had backing at Barcelona after the 3-0 loss to Benfica, Koeman said: ‘I feel the players are behind me.’ Asked if he felt the board backed him too, he said: ‘I don’t know.’

Midfielder Sergio Busquets was asked by Movistar after the game whether this team needed a managerial change to kick-start their season.

He said: ‘The easiest thing in the world of football is (to change manager), but the responsibilities also belong to the players, ourselves. We are in a critical situation.

Team-mate Frenkie de Jong added: ‘Koeman’s future? I can’t say anything, it’s not about me.

‘If it’s the problem? No. We’re trying everything, working hard, but the day hasn’t come out.’ 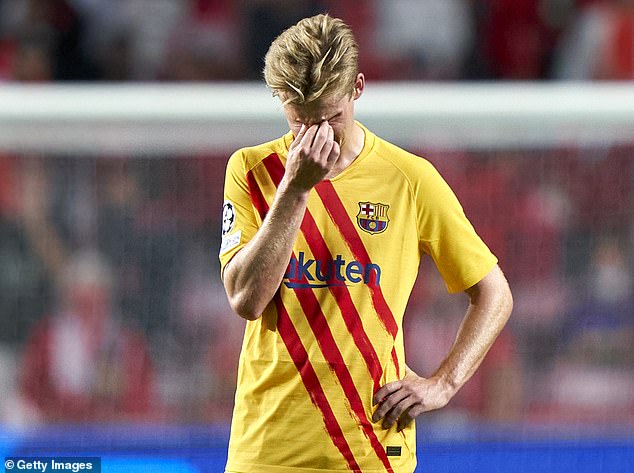 Barcelona’s plight was summed up in the fact that they failed to muster a shot on target during the 90 minutes.

They have also lost their first two group games for the first time since the Champions League started.

‘This is not the team of years gone by. It’s crystal clear,’ added Koeman.

‘They are very quick and strong. There are a lot teams stronger than us.’