Barcelona ‘could TERMINATE Samuel Umtiti’s contract after failing to agree a pay cut on his £200,000 per year salary with new boss Xavi ‘not counting’ on the French centre back

Barcelona could decide to scrap Samuel Umtiti’s contract after failing to agree a reduction on his £208,000-per-year salary, according to reports.

The club have been looking to shift the French defender after struggles for fitness and form in recent months, but could not finalise an exit for him in the summer. Barca are still in a difficult situation financially and are keen to offload their high-earning deadwood.

And Barcelona have now reached the point where they could simply terminate Umtiti’s deal at the Nou Camp after negotiations to cut his pay went nowhere, as reported by Spanish outlet Sport.

Barcelona are weighing up whether to cancel Samuel Umtiti’s contract, according to reports

Club chiefs are ‘studying their options’ because they ‘suffer the consequences of a very high salary and zero performance’ on the pitch, the report adds, having failed to play a minute of action this season.

He was frozen out by previous boss Ronald Koeman and new coach Xavi Hernandez does not rate him either, it says, with an exit and contract termination now seen as the best option for all parties.

The 28-year-old was once a highly-rated centre-back after arriving at Barca from Lyon for around £20million in 2016. He was a first choice member of the squad for his first two seasons – playing 83 times across both campaigns. 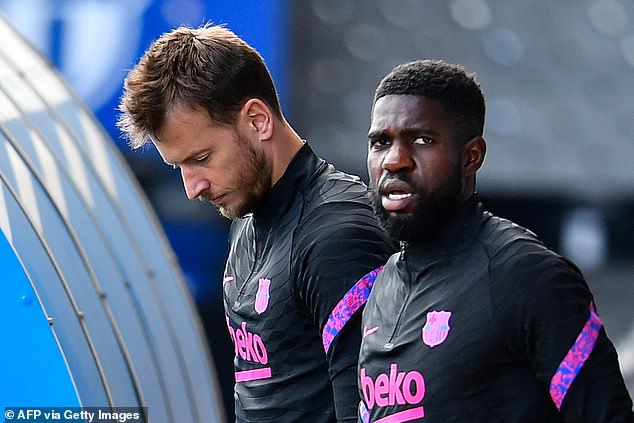 The French defender, who has struggled with injuries, hasn’t played a minute this season 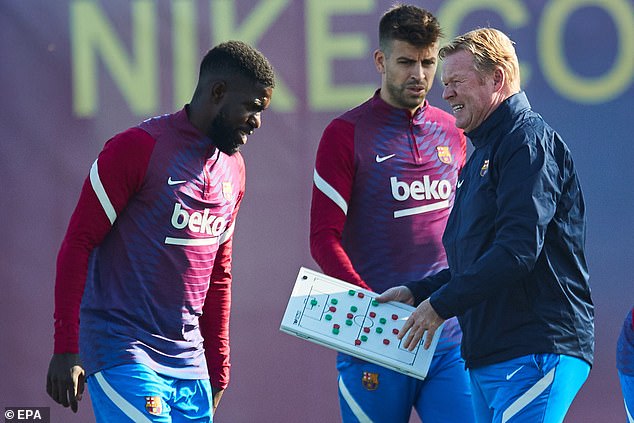 He was frozen out by previous boss Ronald Koeman (R), and new coach Xavi isn’t keen either

But he began picking up a host of injury problems to see his minutes decrease. He started just six times in LaLiga last season, and ten times the year before that.

Umtiti – whose current contract runs until 2023 – has struggled with persistent knee injuries since 2018. He was offered the chance to have surgery on the problem that same year, but turned it down in order to have a chance of playing in the Russia World Cup – which he won with France.

The issue kept him out for five months last season – testing positive for Covid-19 during his recovery to further blight his progress.

In October Spanish media had claimed Barcelona were pushing the player to find himself a new club after struggling to find a buyer in the summer. 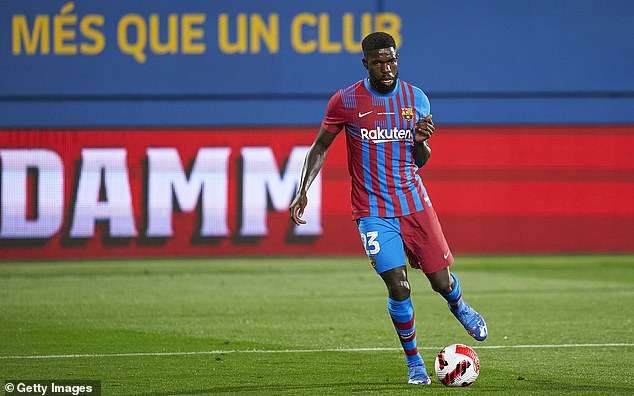 Umtiti reportedly demanded to join a Champions League club and snubbed interest from Nice, Besiktas and Lazio, frustrating his club’s efforts to get him off the books.

They were said to be taking ‘drastic measures’ to clear him off their wage bill, and were planning to step up their efforts to sell him in January. Barca had asked Koeman to play him more often in order to put him in the shop window, but the Dutchman was not convinced by him as he struggles to return to his former self after injury.

Capped 31 times by France, he is a World Cup winner who started the final against Croatia in 2018, and there will be interest in a player with that pedigree.

He has made 132 outings in total for Barcelona, winning LaLiga twice and the Copa Del Rey three times.