There’s a new number ten at the Camp Nou and his name is Ansu Fati. With nine minutes left between Barcelona and Levante, and after 323 days out with a knee injury, the 18-year-old came on to score the third goal in the team’s 3-0 win over Levante

It was the sort of fairytale script Lionel Messi used to write every week and it vanished the gloom and doom that has hung over the club for the last two weeks.

A huge roar had gone up when he started warming up late in the second half, an even bigger roar went up when he came on at minute 81 and almost immediately won a penalty. 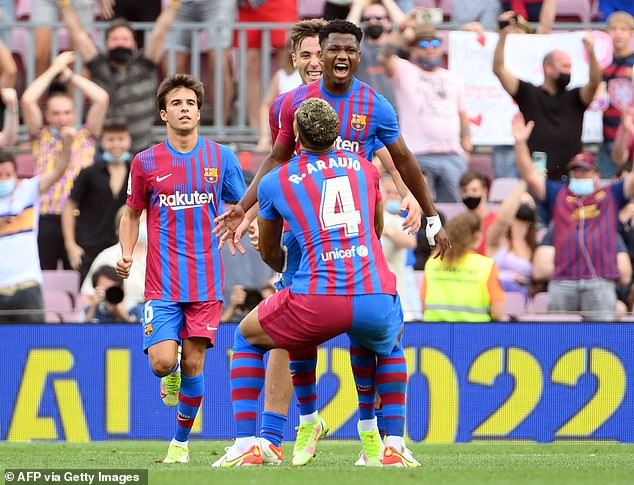 The teenager marked his return in style, scoring his side’s third goal after coming on as a sub 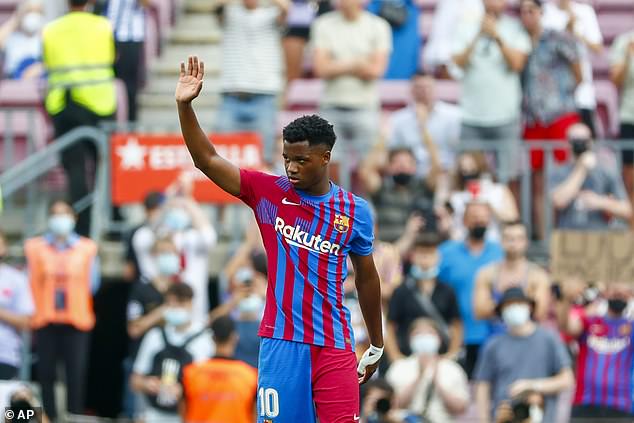 And then when he shook off Levante defender Jorge Miramon and beat Aitor Fernandez, the net bulged and the old stadium shook.

He celebrated by trotting across to the seats next to the dug-out to embrace club doctor Lluis Til.

‘It’s a honour to wear this shirt after Leo. It’s not a pressure, I’m grateful for the chance to wear it,’ he said.

‘We are Barça and we want to win everything. I just want to thank all the doctors and physios who have been with me this time.’

Even without his dramatic return this had been a big day for Barcelona. After two weeks of turmoil they turned on the style at the Camp Nou in front of the banned Ronald Koeman watching from the stands.

Koeman’s countrymen Memphis De Jong and Luuk de Jong helped the boss out with two early goals and teenager Gavi played like Xavi in midfield before Fati came on wearing the number 10 shirt he promised to wear post- Messi after he was asked by the club captains.

Memphis went for the Levante jugular early on and drew first blood.

He ran between Jorge de Frutos and Jorge Miramon and the next obstacle in his path was Nemanja Radoja who tripped him.

From no run-up Memphis sent the keeper the wrong way and buried his spot kick. That was with six minutes on the clock.

On minute 10 Messi was remembered by supporters inside the Camp Nou but with chants of ‘F***ing PSG! F***ing PSG!’.

On 14 minutes it was 2-0 again Memphis was involved. He sent Dest down the left and the full-back’s pass put Luuk de Jong clear to score his first goal for Barcelona.

The Dutch internationals had given the team the perfect platform and it was left to the homegrown talent to shine on it. 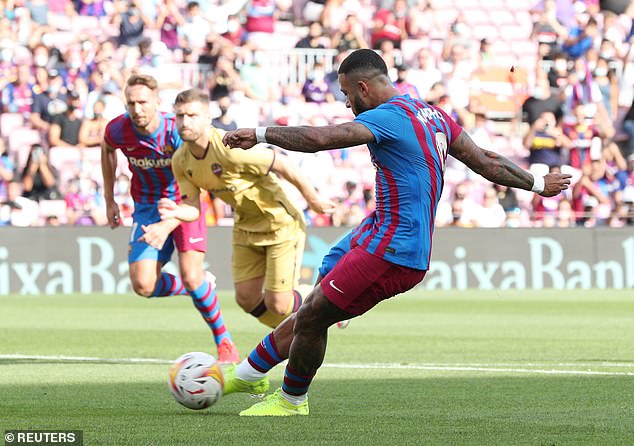 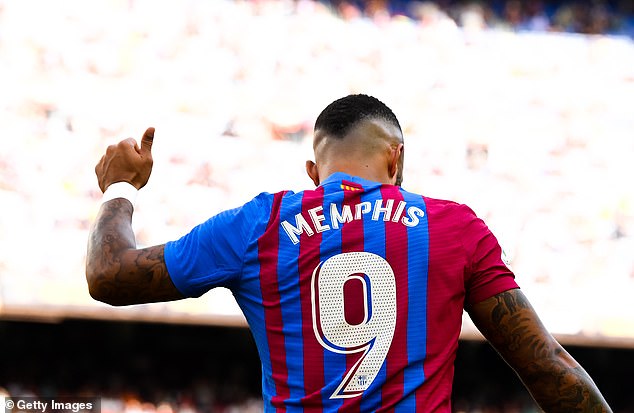 The 17-year-old Gavi, who hails from the same town in Southern Spain as Jesus Navas and who chose Barcelona as a 10-year-old when various top clubs were chasing his signature, was pinging passes across the pitch for fun.

He split the Levante defence to feed Memphis who was forced wide by keeper Aitor Fernandez.

And he then might even have scored himself running onto Oscar Mingueza’s pass but his lob was caught by the Levante keeper. 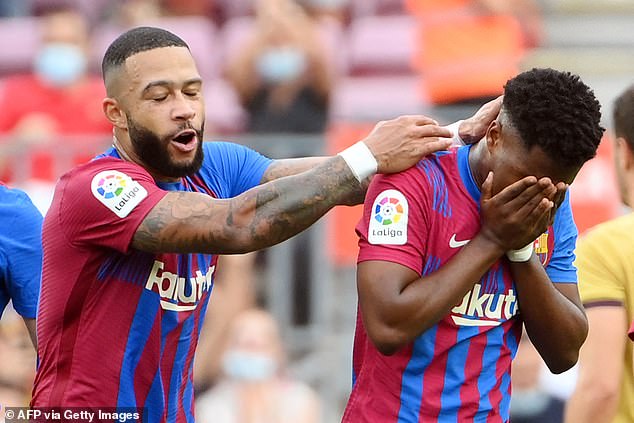 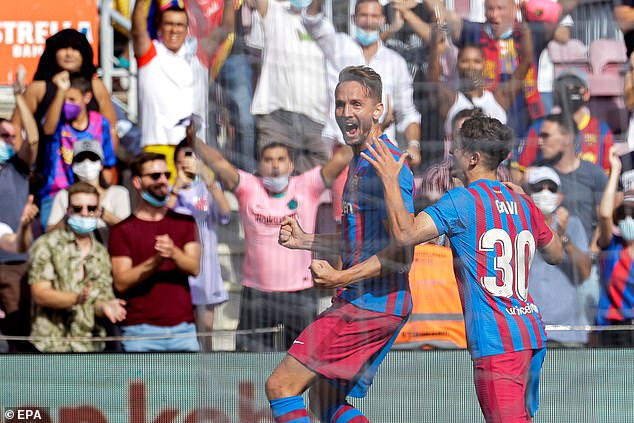 His 19-year-old midfield team-mate Nico Gonzalez was also starring as Barcelona defended high and played with a busy invention that has been absent in recent weeks.

With half an hour left the game was increasingly flat as a contest but things were ever more lively on the touchline.

First Riqui Puig was called to prepare to come on – the cheers were even louder when it became clear that it was Philippe Coutinho coming off and not one of the homegrown youngsters. 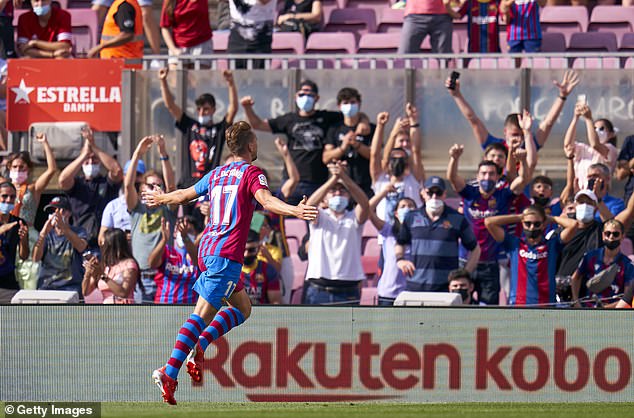 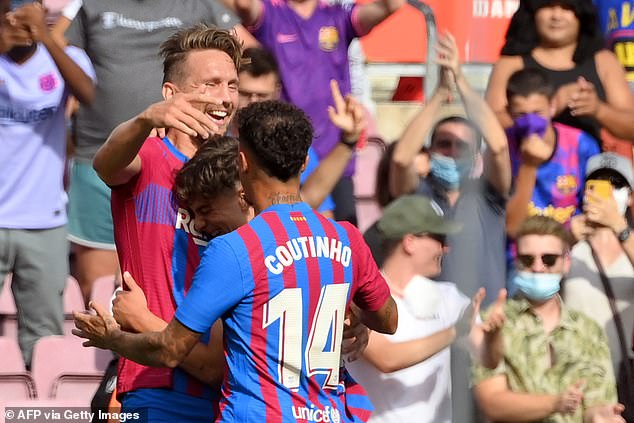 And the cheers were even louder still when Fati began his warm-up.

With 15 minutes left Gavi still had enough in the tank to run in behind Levante once more but his cross was just behind De Jong.

He did come on with nine minutes left.

All that was missing was a goal and it seemed he would get it when Pablo Martinez brought him down in the area only for the referee to wave away penalty appeals.

All that was special enough – a dazzling cameo on his return that had so nearly led to an immediate goal.

But Fati wasn’t finished and on 90 minutes who scored the goal to round off the perfect afternoon.