Barack Obama has revealed the Queen ‘didn’t seem to mind’ when his wife Michelle Obama broke royal protocol and placed her arm around the monarch during a reception at Buckingham Palace.

The former U.S President shed light on the faux pas moment, which saw Mrs Obama putting her arm around Her Majesty’s shoulders during a State Visit for a G20 summit in 2009, in his new memoirs A Promised Land.

It comes just two years after the former First Lady explained the pair had been in a conversation about their sore feet when she placed her arm around the royal.

Commenting on the ‘controversy’, Mr Obama wrote: ‘She was photographed with her hand resting on Her Majesty’s shoulder (see below) – an apparent breach of royalty-commoner protocol.’

In 2009, Michelle Obama was seen placing her arm around the Queen during a reception at Buckingham Palace

He added: ‘Although the Queen didn’t seem to mind, slipping her arm around Michelle in return.

Prior to their visit, the president described how he joked with Mrs Obama and suggested she wear ‘those little hats and carry a little handbag’ before she opted for a cardigan over her dress.

He later told his wife: ‘You should have taken my suggestion and worn one of those little hats. And a little matching handbag!’

The much-anticipated memoir, which will be released on Tuesday, will trace the president’s life from his childhood through his first term in the White House, culminating in the death of Osama bin Laden.

In 2018, Mrs Obama shed light on her encounter with the Queen in her memoir Becoming, Mrs Obama.

She explained she had been having a conversation with the Queen about the pain in their feet after a long day stood up in heels when she placed her arm around her.

Mrs Obama wrote: ‘The Queen then glanced down at the pair of black Jimmy Choos I was wearing. She shook her head.

‘These shoes are unpleasant, are they not?’ she said. She gestured with some frustration at her own black pumps.

‘I confessed then to the Queen that my feet were hurting. She confessed that hers hurt, too. 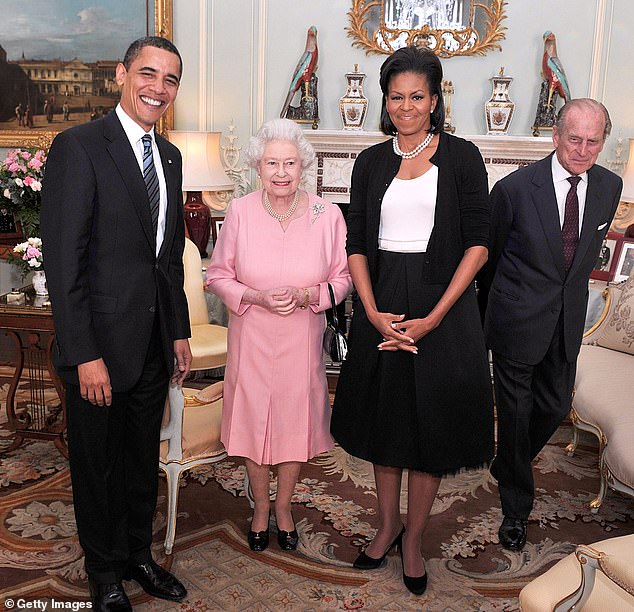 Barack Obama (pictured with the Queen, his wife and the Duke of Edinburgh) said the Queen ‘didn’t seem to mind’ when the former first lady broke royal protocol

‘We looked at each other then with identical expressions, like, when is all this standing around with world leaders going to finally wrap up? And with this, she busted out with a fully charming laugh.’

Mrs Obama added that despite their positions, they were just ‘two tired ladies oppressed by our shoes’, and without thinking she put her arm around the Queen in a gesture of bonding.

While some deemed the gesture an act of sacrilege Mrs Obama said the Queen ‘was OK’ with it.

She wrote: ‘I then did what’s instinctive to me any time I feel connected to a new person, which is to express my feelings outwardly. I laid a hand affectionately across her shoulder.

‘I couldn’t have known it in the moment, but I was committing what would be deemed an epic faux pas.’

The gesture also prompted the Queen to rest her own hand on Mrs Obama’s back.

‘If I hadn’t done the proper thing at Buckingham Palace, I had at least done the human thing. I daresay the Queen was OK with it too, because when I touched her, she pulled closer, resting a gloved hand lightly on the small of my back,’ Mrs Obama added.