‘The highlight of my week!’: Barack Obama joins Eli and Peyton Manning for the first quarter of his beloved Chicago Bears against New England Patriots – and jokes they stole silverware from the White House!

Peyton and Eli Manning took their ManningCast show to a new height for the Patriots game against the Chicago Bears – welcoming President Barack Obama to their coverage.

Obama, 61, is a Bears fan and joined the brothers for the first quarter of Monday’s game against the Patriots.

‘This is the highlight of my week,’ Obama joked, before Peyton put him on the spot while reflecting over his and his brother’s trips to the White House in Obama’s time as president. 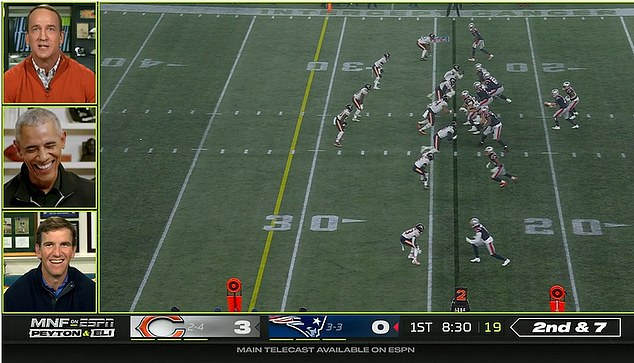 ‘Mr President we both had the pleasure of meeting you at the White House,’ Peyton said. ‘Be honest, who was the better guest?’

Obama laughed and then responded: ‘Both of you guys were gentlemen. There was some silverware missing after that visit but we couldn’t trace it back to you.

‘We had a great time. One of the fun things about being president – and there is a lot of stuff that is so fun – is meeting world class athletes and giving them a chance to sign. It’s a lot of fun.

‘Although I will say when you get football teams in – I’m a skinny guy as it is and when I’m standing next to some of these line men and they are shaking my hand, they’ve got paws. It does make you feel a little bit small.’

Peyton also asked Obama about his love for the Bears team of 85 – a team he has called the best ever – and welcoming them at the White House shortly after a reception with Aaron Rodgers and the Green Bay Packers, who were Super Bowl champions.

‘It was hard having the Packers and having to be nice to them,’ Obama joked. ‘But I moved to Chicago in ’85.

‘You show up in this city, and you’ve got this team that captures everybody’s imagination. The fact that they never got their White House due, I figured, what’s the point of being present if you can’t make up for that?’ 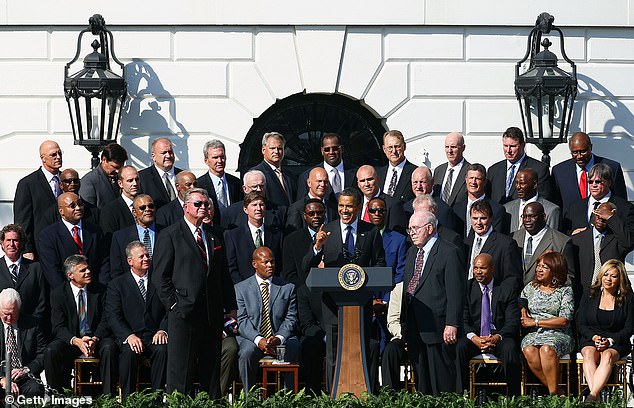 Obama also opened up on his fandom of the present day Bears team.

‘Since I left the White House, we’ve had a little drought pretty much across every sport,’ Obama said. “But you look at the Bears, young team, new coach, they’re playing hard.

‘I’m a big believer in you’re loyal all the way through, as long as they’re playing hard, as long as they look like they care, then I’m gonna stick with them and keep rooting for them. Our day will come again. It may take a while.’