In an interview with The Atlantic ahead of his memoir, ‘A Promised Land,’ being published on Tuesday, Obama charged social media companies with turbocharging the rise in misinformation that has led to greater division in the country.

The former president that disinformation the ‘single biggest threat’ to democracy.

And he said President Donald Trump was a result of it.

‘I think it is the single biggest threat to our democracy. I think Donald Trump is a creature of this, but he did not create it. He may be an accelerant of it, but it preceded him and will outlast him,’ he told the news magazine. 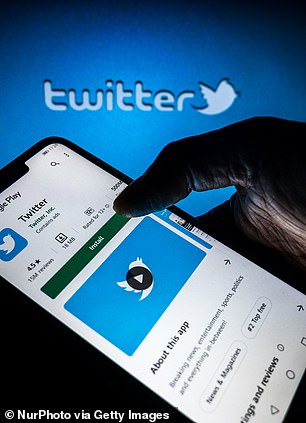 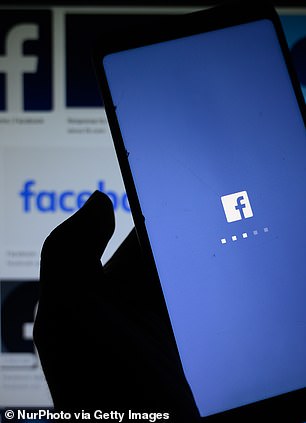 ‘I don’t hold the tech companies entirely responsible, because this predates social media. It was already there. But social media has turbocharged it,’ he said.

Republicans are pushing for greater regulations for Big Tech, charging the companies with unfairly silencing conservatives. Democrats have been a slower to go the legislative route – pushing the companies to self-regulation misinformation, problematic content and harassment on their platforms.

Obama’s words, however could be a sign Democrats are getting ready to act. Other Democrats have hinted to similar frustrations with social media. Speaker Nancy Pelosi, at her weekly press conference on Capitol Hill Friday, said she is ‘not a fan’ of Facebook given the political disinformation on the site.

The former president specifically called for a change in the way tech companies are regulated, referring to section 230 of the Communications Decency Act, which shields the websites from liability for content created by their users. 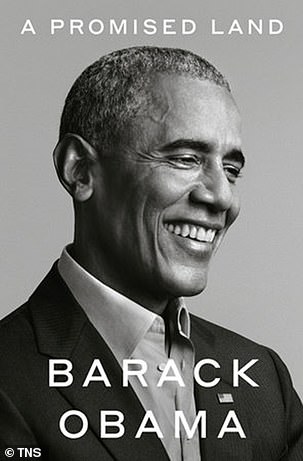 Obama said the companies were more like media companies than utility companies, a comparison Big Tech has pushed.

‘The degree to which these companies are insisting that they are more like a phone company than they are like The Atlantic, I do not think is tenable. They are making editorial choices, whether they’ve buried them in algorithms or not. The First Amendment doesn’t require private companies to provide a platform for any view that is out there,’ he said.

‘At the end of the day, we’re going to have to find a combination of government regulations and corporate practices that address this, because it’s going to get worse. If you can perpetrate crazy lies and conspiracy theories just with texts, imagine what you can do when you can make it look like you or me saying anything on video. We’re pretty close to that now,’ he added.

The Communications Decency Act, which sets the laws governing the internet, was written in 1996 when companies like Google and Facebook didn’t exist. Tech companies are fighting to keep the blanket protections provided by the law as there is a rising call to increase regulation of them.

‘If we do not have the capacity to distinguish what’s true from what’s false, then by definition the marketplace of ideas doesn’t work. And by definition our democracy doesn’t work. We are entering into an epistemological crisis,’ Obama said in his interview.

He said regulation was the only option.

Section 230 is credited with allowing the modern internet to exist.

And the debate over regulation of the internet has come to ahead since Russians tried to use disinformation campaigns on social media to influence the 2016 election.

Twitter and Facebook, in particular, are heavily dependent on Section 230 to build their businesses and boost their profits. Both companies have increased their internal regulations of user content this election year in the face of the growing threat of federal regulation.

Obama, meanwhile, is on a publicity campaign ahead of the launch of his memoir, the first of two parts reflecting on his life and presidency. The first part details his early public life to the raid that killed Obama bin Laden. He is working on part two but no publication date has been announced.

As part of his media tour, Obama told ’60 Minutes,’ in an interview that aired Sunday night, that President Trump’s refusal to concede the presidential election is making the United States look weak to adversaries.

He urged his successor to accept his defeat to Joe Biden and move on for the country’s sake.

Asked what advice he would give to Trump, Obama said: ‘If you want at this late stage in the game to be remembered as somebody who put country first, it’s time for you to do the same thing.’

‘A president is a public servant. They are temporary occupants of the office, by design,’ he continued.

Obama said he thinks Trump should have conceded within two days after the election, when it became clear that ‘Biden will have won handily’.

‘There is no scenario in which any of those states would turn the other way, and certainly not enough to reverse the outcome of the election,’ he said, referring to states like Pennsylvania and Georgia where full counts were slow to come in. 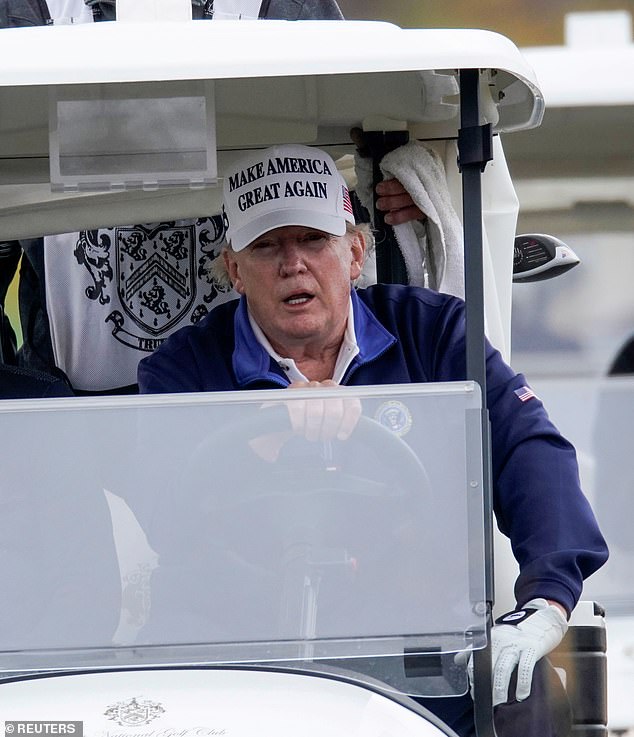 Asked what advice he would give to Trump, Obama said: ‘If you want at this late stage in the game to be remembered as somebody who put country first, it’s time for you to do the same thing.’ Trump is pictured at his golf club in Virginia on Sunday

Obama said he fears that the chaotic White House transition will have implications far beyond the US, affecting relations with Russia and China.

Barack Obama said he would never take a job in Joe Biden’s White House because ‘Michelle would leave me.’

The 44th President of the United States joked that his marriage would be on the rocks in an interview to CBS on Sunday ahead of the release of his latest memoir.

Asked about helping his old VP, Obama said: ‘He doesn’t need my advice, and I will help him in any ways that I can. Now, I’m not planning to suddenly work on the White House staff or something.’

Susan Rice and Michelle Flournoy are among some of the veteran Obama staffers who are considering stepping into the Biden camp.

But Obama joked: ‘There are some things I would not be doing because Michelle would leave me. She’d be like, what? You’re doing what?’

Indeed, in an excerpt from his new book, A Promised Land, Obama admitted that his time in the White House left wife Michelle feeling ‘tense and lonely.’

Obama believes much of this can be attributed to a constant looking ahead to ‘calamity’ – no matter one’s past triumphs, the political wheel continued to turn and ‘so, consciously or not, a part of her stayed on alert.’

‘It makes me wonder now, with the benefit of hindsight, whether Michelle’s was the more honest response to all the changes we were going through; whether in my seeming calm as crises piled up, my insistence that everything would work out in the end, I was really just protecting myself – and contributing to her loneliness.’ Obama writes.

‘I think our adversaries have seen us weakened, not just as a consequence of this election, but over the last several years,’ he said.

‘We have these cleavages in the body politic that they’re convinced they can exploit.’

CBS’s Scott Pelley then brought up Obama’s new book, ‘The Promised Land,’ in which he wrote: ‘Our democracy seems to be teetering on the brink of a crisis.’

Explaining what he meant by that line, Obama criticized Trump further, saying: ‘We have gone through a presidency that disregarded a whole host of basic institutional norms, expectations we had for a president that had been observed by Republicans and Democrats previously.

‘Maybe most importantly, and most disconcertingly, what we’ve seen is what some people call truth decay, something that’s been accelerated by outgoing President Trump, the sense that not only do we not have to tell the truth, but the truth doesn’t even matter.’

Pelley used that as a segue to ask for Obama’s take on Trump’s unfounded allegations about voter fraud and Democrats ‘stealing’ the election.

‘They appear to be motivated, in part, because the president doesn’t like to lose and never admits loss,’ Obama said.

He then hit out at members of the Republican Party who have stood by Trump and helped advance his conspiracy theories instead of facilitating a productive transition.

‘I’m more troubled by the fact that other Republican officials who clearly know better are going along with this, are humoring him in this fashion,’ he said.

‘It is one more step in delegitimizing not just the incoming Biden administration, but democracy generally. And that’s a dangerous path.’

He continued: ‘We would never accept that out of our own kids behaving that way if they lost, right? I mean, if my daughters, in any kinda competition, pouted and then accused the other side of cheating when they lost, when there was no evidence of it, we’d scold ’em.

‘I think that there has been this sense over the last several years that literally anything goes and is justified in order to get power.’

He then appeared to compare Trump to a dictator, saying: ‘There are strong men and dictators around the world who think that: ‘I can do anything to stay in power. I can kill people. I can throw them in jail. I can run phony elections. I can suppress journalists.’ 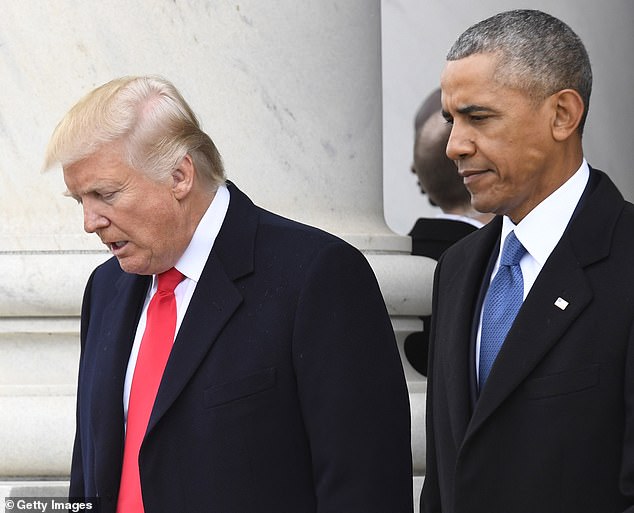 Obama said Trump’s unfounded allegations about voter fraud ‘appear to be motivated, in part, because the president doesn’t like to lose and never admits loss’ 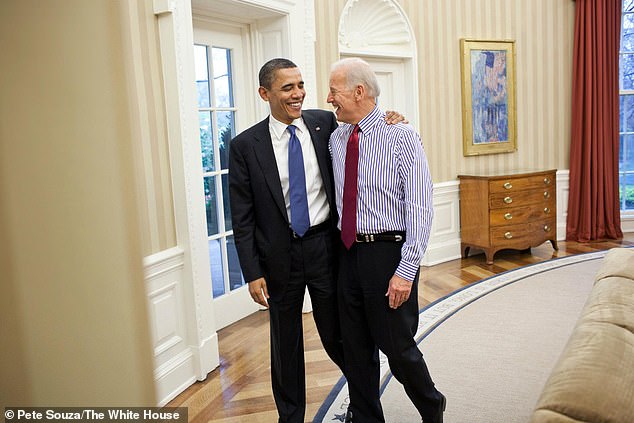 ‘But that’s not who we’re supposed to be. And one of the signals I think that Joe Biden needs to send to the world is that: ‘No, those values that we preached, and we believed in, and subscribed in – we still believe.”

Obama said he isn’t sure what will happen when inauguration day arrives in January but said he is hopeful that Trump will follow tradition and welcome Biden just as he was welcomed by Obama in 2017.

In the past several months Trump has publicly refused to commit to a peaceful transfer of power.

Prior to the election, he merely said it wasn’t an issue because he was sure he would win. And in the days since Biden was declared the winner by the media on November 7, Trump has continued to insist that the election is not over.