Banksy has taken to social media to claim responsibility for a mural which appeared overnight on the walls of a Victorian jail where Oscar Wilde was famously held.

The elusive street artist confirmed responsibility for the artwork by posting a parody instruction video on his Instagram account told in the style of the American TV show The Joy of Painting hosted by painter Bob Ross.

It comes just days after the painting, which depicts a prisoner attempting to escape over the wall with a typewriter in his hand, was etched onto the side of HMP Reading.

The prison is renowned as the location where Irish poet Oscar Wilde was incarcerated from 1895-1897 for committing ‘gross indecency’ and went on to inspire his final published work ‘The Ballad of Reading Gaol’. 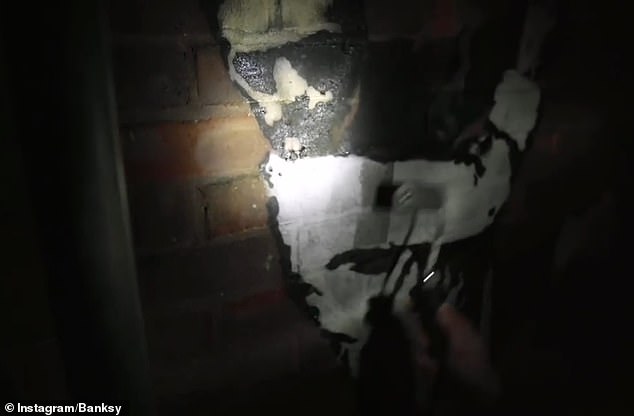 During the footage, entitled Create Escape, painter Bob Ross introduces viewers to an art session before the camera cuts away to Banksy spray painting the prison wall in the dead of night.

As the presenter’s voice continues in the background, the artist uses stencils and various spray paints to complete his depiction of a prisoner attempting to escape.

The clip then cuts away to drone footage over the prison gates as Bob Ross says in the background: ‘Painting to me represents freedom. I can create the kind of world that I want to see and I want to be a part of.’

Before the piece was confirmed as belonging to Banksy, it was welcomed by Labour’s Reading East MP Matt Rodda who said it highlighted the ‘national and international importance of this unique historic building’.

HM Prison Reading was built in 1844 as the Berkshire County Gaol and as a county gaol, its forecourt served as the site for public executions.

It was designed by George Gilbert Scott and was considered ‘state of the art’ when built in 1844.

The prison closed as gaol in 1920 and was used as an internment site in both world wars, before being converted into a Borstal, a local prison and a Remand Centre and Young Offenders Institution.

Although the site closed to prisoners in 2013, its future is currently the focus of fierce debate.

The Ministry of Justice, which owns the building, is due to decide by March 15 whether it will be turned into an arts venue. 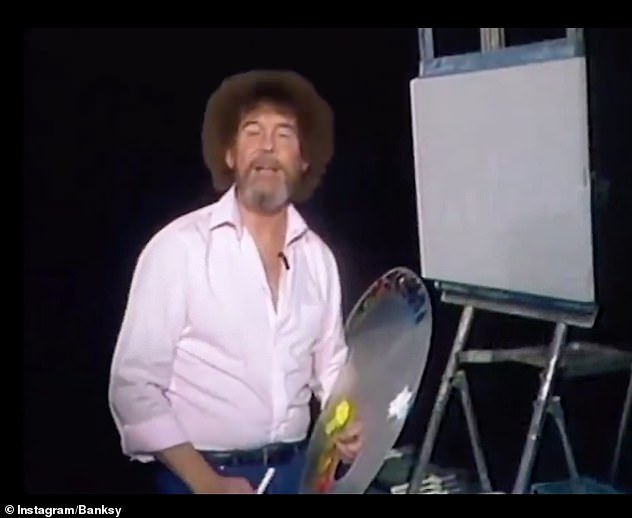 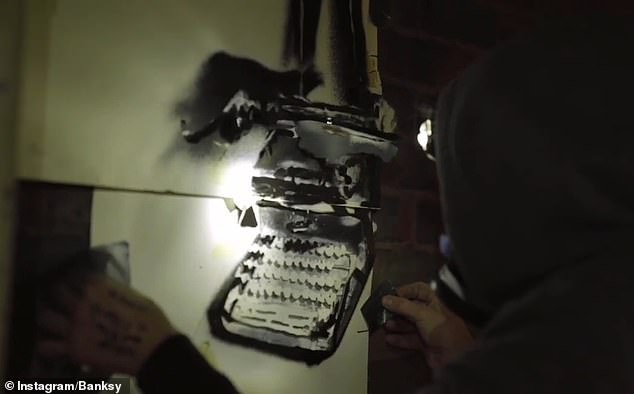 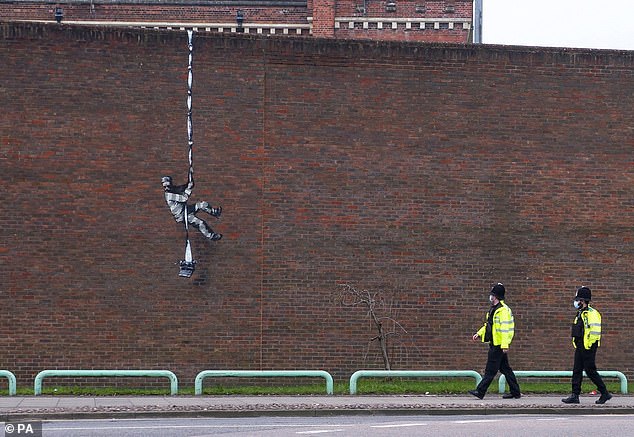 However there are fears that if that bid by Reading Borough Council is unsuccessful, the Grade-II listed site could be sold to property developers.

In December, a Banksy artwork entitled ‘Aachoo!!’, which depicted a pensioner in a headscarf sneezing and her dentures shooting out of her mouth, was discovered on the external wall of a semi-detached house in Bristol.

Just months earlier, a mural of a little girl hula hooping with what appeared to be a bicycle tyre was painted on a brick wall on the side of a beauty parlour in Lenton, Nottingham.

Meanwhile in July last year, Banksy’s artwork inside a London Underground train carriage, with messages about the spread of coronavirus, was removed by Transport for London (TfL).

The artist uploaded a 59-second video captioned: ‘If you don’t mask – you don’t get’ to his Instagram and YouTube pages.

It showed Banksy spray painting stencils of his famous rats inside a Circle Line train. 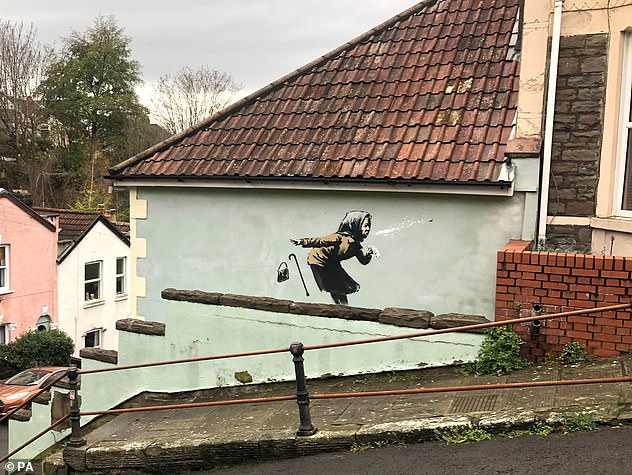 Banksy’s last piece, the ‘Aachoo!!’ artwork, appeared overnight on the side of a property in Bristol on December 10 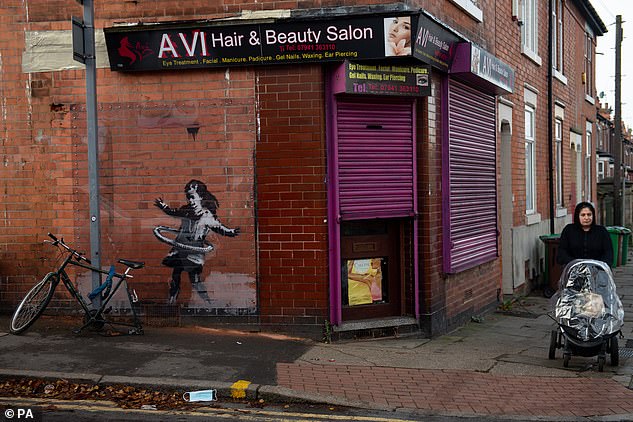 Last year a mural of a little girl hula hooping with what appeared to be a bicycle tyre was painted by Banksy on a brick wall in Lenton, Nottingham

The anonymous street artist, who made his name with his trademark stencil-style ‘guerrilla’ art in public spaces, including on walls in London, Brighton, Bristol and on the West Bank barrier separating Israel and Palestine, is known to create his masterpieces under the cover of darkness.

He will often confirm he is the creator of a piece of artwork by posting images of them on Instagram or on his website.

Establishing himself as the world’s most elusive artist, the ‘graffiti guerrilla’, who began his street art 25 years ago, has seen his works coveted by collectors and celebrities including the Hollywood stars Brad Pitt and Angelina Jolie. 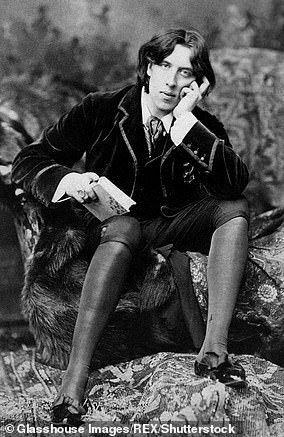 Playwright Oscar Wilde was among the illustrious inmates who have languished in Reading’s historic Grade II-listed jail.

His time there inspired his last published work, The Ballad Of Reading Gaol.

At the very height of his fame, the celebrated writer was sentenced to two years hard labour following a showcase trial which saw him charged with acts of gross indecency after his affair with poet and journalist Lord Alfred Douglas was exposed.

Following short stints in Pentonville and Wandsworth prisons he was moved to Reading Gaol, a sprawling prison built in 1844, then home to some of the country’s most dangerous men.

He was spent his time locked up in wing C number 33 on the top floor of HMP Reading.

For Wilde, a sensitive and fun-loving man, the prison experience was devastating and he left a broken man.

Wilde recalled Reading Prison in his poems and said: ‘Each narrow cell in which we dwell is foul and dark latrine/And the fetid breath of living Death chokes up each grated screen.’

Historian Emily O’Neil said that Wilde was often locked up in his dark cell for up to two weeks at a time.