An extraordinary mud-slinging stoush in which an elderly woman angrily hurled clumps of dirt at tradies next door is just the latest clash in a long-running neighbourhood dispute.

Daily Mail Australia can reveal the two warring households at Bankstown in southwest Sydney have been embroiled in a civil lawsuit over construction works for nearly a year – with police called previously over the feud.

A video posted on TikTok – which went viral earlier this week – showed an elderly woman and a man, believed to be her brother, storm out of their home after their electricity line was cut by tradesmen working next door.

The woman quickly begins pelting clumps of mud onto her neighbour’s new driveway while her sibling angrily yells at the workers about their power being disconnected. 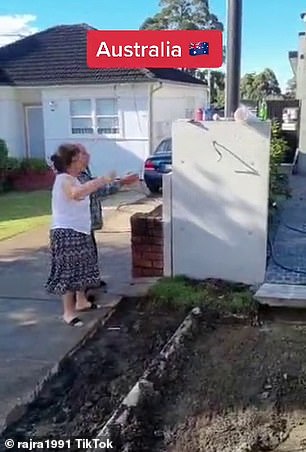 Since moving into their new home in April last year, the young family said there had been ongoing conflict with her neighbours.

The homeowner, who wished to remain anonymous, told Daily Mail Australia her elderly neighbours had woken her children by banging on the fence, mimicked her toddler when he cried and complained to council if their bins had been out a day too long.

She said the latest drama unfolded when they installed a new wheelchair accessible driveway for her brother.

After 12 months of council red tape, the cement was finally laid on Monday and a power pole, which connects to neighbouring properties, was temporarily turned off. 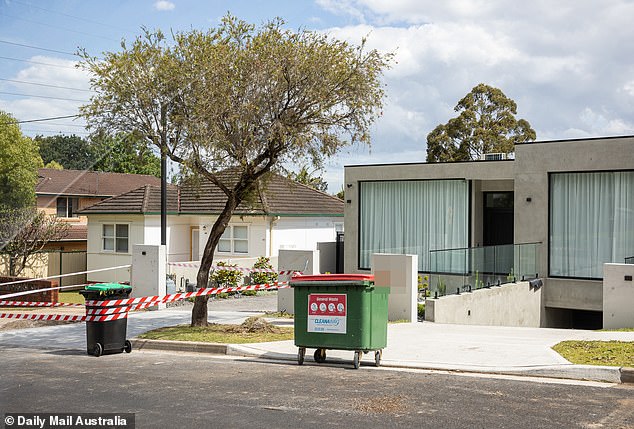 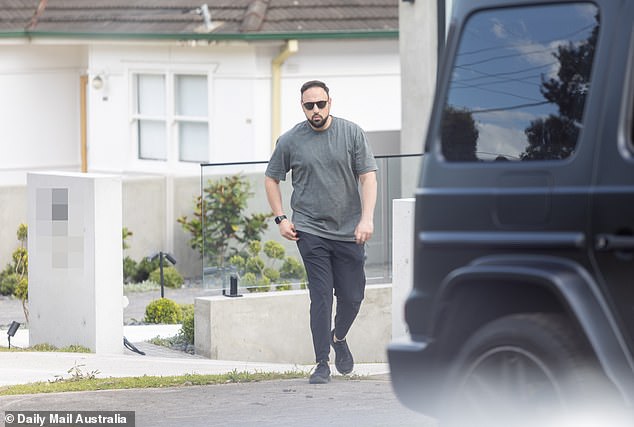 The young family said their neighbours had been given warning about the scheduled outage. Pictured: A man outside the new property owners’ home on Tuesday

She said the pair next door were given advance warning of the disconnection.

‘Ausgrid, council and the neighbours were informed of all the works happening and we have all the approvals signed off on. We had to cut her power and reconnect it within five minutes.’

But Daily Mail Australia has been told Ausgrid had not approved the works – meaning they would not have received an official heads up before their power was switched off.

An Ausgrid spokeswoman said they were aware of the incident that resulted in the loss of power.

‘The power has since been restored to the property and we are investigating the cause of the disconnection,’ she said.

Despite the conflicting claims, the young neighbour said she was ‘distressed’ to see the video posted online after the family gave the tradesmen strict instructions not to film or circulate the footage.

It was ‘really not nice’ seeing older citizens being taunted on social media and that she would not be happy if that happened to her grandparents. 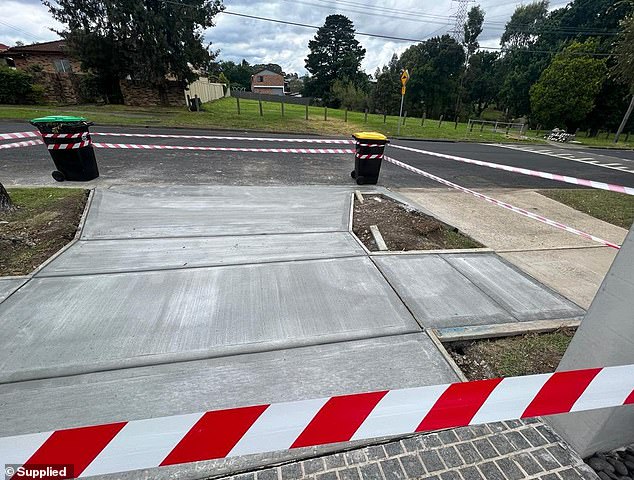 Property records show the young family took ownership of the land in August 2020, with plans to demolish the pre-existing dwelling and build a new home.

Months later, they took their neighbour to court seeking compensation and a court order to grant them access to their property for the purpose of carrying out works.

Their claim was knocked back in Sydney’s Downing Centre Local Court on October 28 and the young family were ordered to pay the legal fees for the defendant, their elderly male neighbour.

Daily Mail Australia made several unsuccessful attempts to contact the elderly residents. In a call to the home on Wednesday, a woman hung up the phone after claiming the wrong number had been dialled. 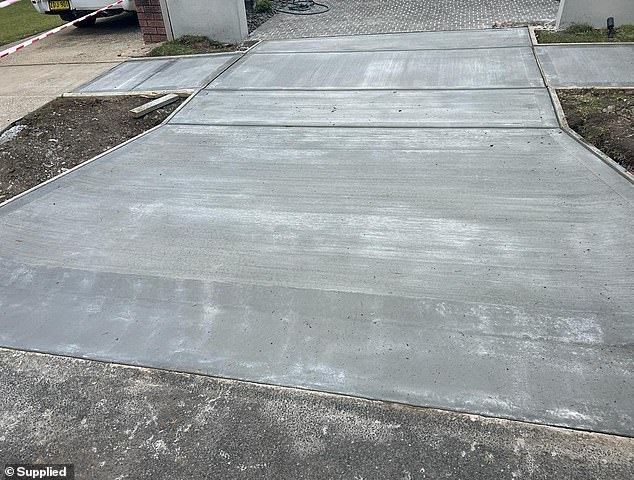 The previous driveway had a kerb where it joined to the road, making it difficult for a wheelchair to roll over smoothly to access the house

Meanwhile, the quarrel has divided the internet – with some saying the elderly neighbours had a right to be upset while others felt the older woman overreacted.

‘They cut the electricity without warning and the lady was cooking. That’s why she got angry,’ one person wrote.

Another added: ‘Well if you cut their power without notice than I get why she’s upset.’

‘Ok they accidentally cut her power, likely will be restored. She doesn’t like the fence. It’s not the builders fault,’ someone else suggested.

However, the division has also extended into the community, with neighbours saying they were ‘devastated’ for the older woman after witnessing the viral clip on Tuesday morning.

‘She is just the loveliest lady,’ one woman, who wished to remain anonymous, said.

Fellow neighbour Mel added: ‘How would you feel if it was your mum on social media?

‘How would you feel if your power was cut? It’s sad.