The Government’s long-term borrowing costs hit their highest level in 20 years yesterday as the Bank of England paved the way for a steep interest rate hike within weeks.

Rate hikes: The Bank of England’s chief economist said a ‘significant policy response’ was needed after Kwasi Kwarteng’s mini-Budget and the market turmoil

Rates on 20-year gilts also climbed sharply while benchmark ten-year gilts are on course for their worst month since 1957.

That makes it more expensive for the Government, businesses and households to borrow.

But the pound steadied after its dramatic fall to an all-time low below $1.04 early this week. Gilt yields have been rising, and sterling falling, for weeks amid fears for the global economic outlook.

The sell-off accelerated on Friday after the Chancellor unveiled tax cuts worth £45billion, the biggest in half a century, in a bid to boost growth.

Markets took fright over the scale of borrowing needed to fund the cuts and a £100billion package of energy bills help.

The sell-off continued into early on Monday when the pound dipped to its record low against the dollar.

Sterling has climbed back from that nadir but struggled to make ground yesterday, treading water just below $1.07.

The Bank’s initial response on Monday, in which governor Andrew Bailey said it would not hesitate to raise rates if necessary, failed to rally the pound.

Yesterday Pill said the ‘combination of fiscal announcements’ in the mini-Budget would act ‘as a stimulus to demand’.

He added: ‘I think it’s hard not to draw the conclusion that all this will require a significant monetary policy response.’

Yet the Bank is resisting calls for an emergency meeting and to hike rates before its next meeting on November 3. The rate, now at 2.25 per cent, is now expected to top 6 per cent next year.

Some market watchers believe the Bank’s inaction in tackling inflation is largely to blame for creating edgy market conditions, before the dam burst on Friday.

Other elements of the mini-Budget were expected and Chris Teschmacher, of Legal and General Investment Management, said ‘surprise elements… are not actually that expensive to fund’.

‘The currency market reaction appears to be more about the Bank of England’s credibility on fighting inflation and longer-term fiscal control,’ he said.

Michael Brown, head of market intelligence at Caxton, said: ‘The Bank of England’s statement that they ‘won’t hesitate to change rates as much as needed’ fell well short of what the market was expecting.

‘It was an inadequate statement from an inept central bank that is well out of its depth; though, admittedly, there are no easy options to get out of this mess.’

The Government was still able to sell gilts yesterday, with a £1.2billion auction covered 2.3 times over. But the real yield on 2031-dated inflation-linked gilts was the highest since November 2012. 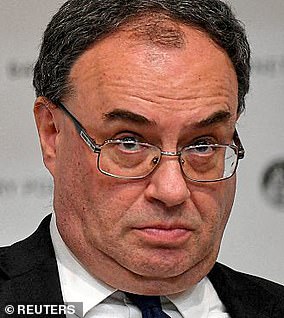 Inflation rose above the 2 per cent target in May last year and peaked at 10.1 per cent in July this year.

Here are four key moments when the Bank of England resisted taking forceful action to tackle inflation – instead opting for a softer response.

Bank’s then chief economist, Andy Haldane, calls for QE to be scaled back but is out-voted.

Interest rates held at 0.1 per cent despite widespread expectation of a hike to 0.25 per cent.

Calls for a 0.5 percentage point rate hike were rejected in favour of 0.25pp rise.

Bank disappoints markets with 0.5pp hike rather than 0.75pp.