The Bank of England hiked the base rate to its highest level for 13 years today, with a 0.25 per cent rise to 1 per cent.

The rate rise to battle surging inflation will benefit savers but hit mortgage borrowers and businesses, who will face higher borrowing costs.

Led by Governor Andrew Bailey, the Monetary Policy Committee increased the key UK interest rate from 0.75 per cent to 1 per cent. Today marks the fourth time since December that the Bank has upped interest rates.

The MPC voted by a majority of 6-3 to increase Bank Rate by 0.25 percentage points, but the members in the minority were not advocating that rates should be held and instead preferred a 0.5 percentage points rise to 1.25 per cent.

On the up: The Bank of England has upped UK interest rates to 1% today

The Bank also upped its forecast for UK inflation, which it previously said would hit 8 per cent in April and grow further this autumn. Officially, it hit a 30-year high of 7 per cent in March.

The cost of living crisis is set to worsen further in October, when another increase in the energy cap is expected.

The Bank’s rate hike comes as the cost of living crisis and the war in Ukraine have slowed down the recovery of the key services sector, according to fresh figures.

Services firms, which range from banks to hairdressers, account for 80 per cent of the total UK economic output, so a slowdown indicates a loss of momentum in the whole economy. 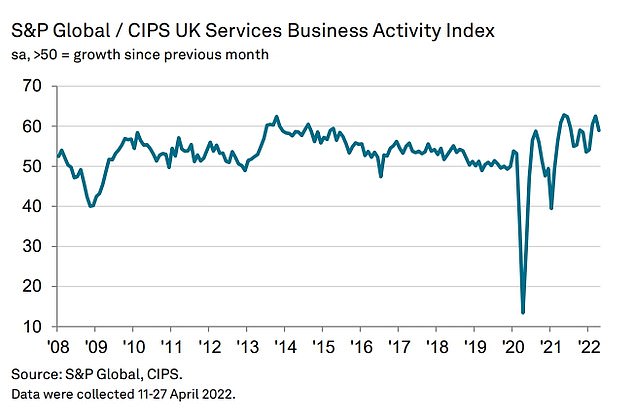 Businesses recorded the fastest rise in costs in almost 26 years in April, with energy, wages and fuel all going up in price. In turn, companies hiked prices they charge to customers at close to record pace.

New business growth slowed sharply and was the weakest so far this year. Meanwhile, business confidence dropped to the lowest in a year and half as firms worried about rising costs.

Andrew Harker, economics director at S&P Global, said: ‘The twin headwinds of the cost-of-living crisis and the war in Ukraine started to bite on the UK service sector during April, as evidenced by a sharp slowdown in new order growth to the lowest in the year so far.

‘Worryingly, companies seem to be expecting impacts to be prolonged, with business confidence dropping to the lowest in a year-and-a-half.

‘Indeed, cost pressures show little sign of abating, with inflation even accelerating in April to the strongest in almost 26 years of data collection.

‘The feeding through of these cost pressures to charges for customers means that the spell of rapid inflation clearly has further to run.’

Martin Beck, chief economic advisor to the EY ITEM Club, said figures suggest the UK economy is in for a sharp slowdown this quarter.

‘The forward-looking indices of April’s survey fell back at a faster rate than the headline index, suggesting growth in activity will slow further during Q2.

‘This evidence of a loss of private sector momentum reinforces the EY ITEM Club’s expectation that GDP growth will slow significantly in Q2.’ 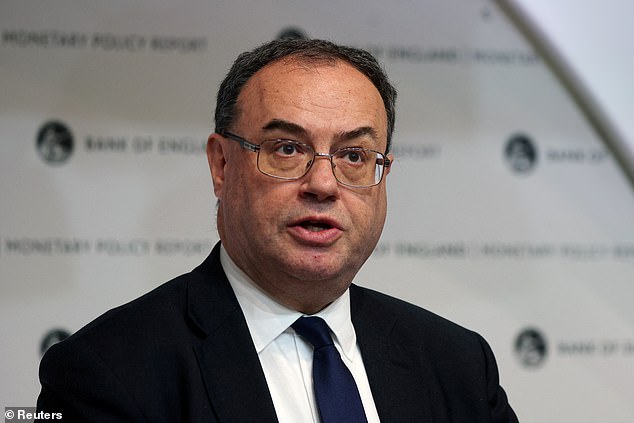 In charge: Bank of England governor Andrew Bailey is under pressure amid surging inflation

On Wednesday, the US Federal Reserve unveiled its biggest interest rate hike in over two decades as it toughens its fight against rapidly surging prices.

The Fed said it was upping its benchmark interest rate by half a percentage point, to a range of 0.75 per cent to 1 per cent after a smaller rise in March. With US inflation at a 40-year high, further hikes are expected, just as they are in the UK.

The push from the Fed marks the latest effort to contain spiking costs being felt by households around the world.

On Wednesday, India’s central bank announced an unexpected increase to its benchmark rate, while Australia’s central bank recently enacted its first interest rate hike in more than a decade. 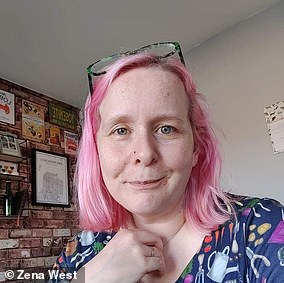 Zena West: ‘I have gone into survival mode’

Zena West is a Nottinghamshire-based glass artist who runs her own company, West Art and Glass.

In response to today’s interest rate hike, Zena said: ‘With interest rates and inflation rising, I have gone into survival mode.

‘I am hoping I manage to weather what is looking to be a very long storm ahead.

‘The cost of electricity, raw materials, travel and postage costs have all gone up, as well as food, and now higher interest rates are adding to the pressure.

‘I’ve resisted raising my prices for now amid the cost of living crisis, but it is inevitable. I’ve also had to stop investing in my business or expanding my range, as money won’t allow it.’

Seena Gosrani: ‘The walls are closing in on small businesses’

Seena Gosrani, owner of London-based jeweller, Bottlebee, said: ‘With interest rates and the cost of pretty much everything rising, the walls are closing in on small businesses.

‘Compared to this time last year my sales have dipped. We were in Covid times last year and sales were steady so I can only put the dip down to soaring inflation and the terrible state of the economy.

‘I myself am now spending more cautiously as I am unsure what future outgoings will be. I have to pass on any increase in supplier costs to the consumer, which clearly puts pressure on sales.’

‘On top of soaring costs, inflation and supply chain issues, the outlook is extremely worrying if many don’t receive the support they so urgently need soon.

‘Our own research indicates that many business owners are increasing their own costs as a result, some by up to 30 per cent.

‘One in 10 businesses we spoke to said they may have to reduce personnel, scale back on investments and pull out of certain markets as a result.

‘ This only serves to amplify the domino effect this has on our economic recovery and cost of living crisis, if measures aren’t put in place soon.’