Britain’s unemployment rate of far worse than official figures suggest, the head of the Bank of England warned today as he said the second wave of coronavirus would hamper economic recovery.

Andrew Bailey said that while the UK’s jobless toll is officially 4.9 per cent, he believed the true level is around 6.5 per cent.

The Bank governor addressed the Scottish Chambers of Commerce virtually this morning, saying that the current surge of Covid-19 that forces a third lockdown would ‘delay, probably, the trajectory’ of economic recovery this year.

But there was a glimmer of good news as he said he did not believe unemployment would hit its projected 8 per cent nadir, thanks to job-protection schemes in place.

He added that economic activity during the first quarter would be depressed until COVID-19 vaccines are widespread enough to allow a lifting of some of the lockdown restrictions.

It came as Boris Johnson faced growing pressure to launch round-the-clock vaccinations as ministers ‘race against time’ to get jabs in arms.

Labour has demanded the Government ‘sorts out’ a 24/7 operation despite No10 claiming there is no ‘clamour’ for appointments after 8pm.

Tory MPs are urging ministers to ‘look carefully’ at whether the hours can be extended, although most have stopped short of calling for the priority list to be torn up.

Andrew Bailey said that while the UK’s jobless toll is officially 4.9 per cent, he believed the true level is around 6.5 per cent 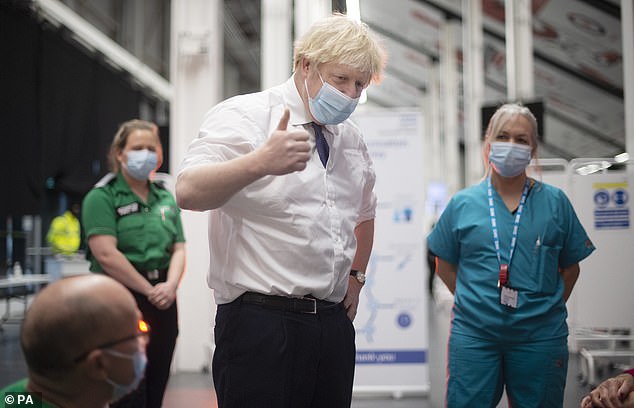 ‘(We’re) in a very difficult period at the moment and there’s no question that it’s going to delay, probably, the trajectory,’ Mr Bailey said in his online speech this morning.

However, he added that the basic shape of the recovery was likely to reflect the trajectory that the BoE outlined in a set of forecasts in November.

Addressing the unemployment rate he said: ‘Our best guess nationwide is probably it’s around 6.5 per cent.’

His comments followed Chancellor Rishi Sunak’s warning yesterday that the economy would likely get worse before it gets better, with the country now in its third national lockdown and struggling to contain the spread of the coronavirus.

Most economists think Britain’s economy is likely to tip back into recession – shrinking in the final quarter of 2020 and the first quarter of 2021 – following a record 25% fall in output in the first two months of lockdown last year.

Bailey said the BoE’s ‘best guess’ was that economic output in the last three months of 2020 was flat to slightly down.

It came as the country recorded a further 529 Covid deaths on Monday – marking a 30 per cent rise on the 407 reported on the same day last week.

It was the deadliest Monday since April 20 when 570 people lost their lives and it marked the worst week for deaths in Britain since the pandemic began. An average of 931 people have lost their lives on each of the past seven days, compared to the highest seven-day average of 920 in April’s first wave.

But, in a positive sign that the UK’s soaring case load may be leveling out, 46,169 people tested positive for the virus – down 20 per cent in a week.

The PM has promised that around 13million of the most vulnerable Britons will be vaccinated by mid-February.

The aim is for everyone over the age of 50 to be offered a Covid jab by the end of April.

But doubts have been raised about the target with numbers standing at around 2.7million as of yesterday, and there are also calls for frontline workers such as teachers to be pushed up the priority list.

The latest ambitious timetable means vaccinating 32million Britons – six in ten adults – within 16 weeks. Two million jabs will have to be given every week in the ‘greatest logistical challenge of our time’.

A 47-page masterplan published last night said the nation’s remaining adults – another 21million – would be inoculated by autumn.

This second phase is likely to prioritise teachers, police, shop staff and others whose jobs involve dealing with the public.

The 13million most vulnerable – over-70s, health workers and care residents – are already scheduled to receive their jabs by February 15. Doses will be 12 weeks apart.

The aim is for all over-50s to have the first jab of the two-dose vaccine by May.