Daily coronavirus infections across the UK surged 56 per cent in a week today, official figures show — but the rise is due to a dip in testing last Monday.

The Department of Health’s daily update showed there were 41,192 new cases in the past 24 hours compared to just 26,476 on Bank Holiday Monday.

There were just 670,000 tests carried out on that day compared to more than a million today, with the numbers typically lower during public holidays.

The latest cases mean more than 7million people have officially been infected with Covid in Britain, although millions more are thought to have gone untested.

Another 45 Covid deaths were also registered today marking a 6 per cent fall compared to last week but this may also have been affected by the bank holiday.

It comes as Professor Chris Whitty and his fellow chief medical officers in the devolved nations prepare to deliver a decision on vaccinating children this week.

The Government’s vaccine advisory panel said on Friday that it would not recommend routinely vaccinating 12 to 15-year-olds because Covid poses such a low threat to their health.

It has left the decision with the CMOs who will weigh up whether jabbing kids will have broader benefits to society, such as keeping schools open during winter.

MailOnline understands a decision is expected no later than Friday. 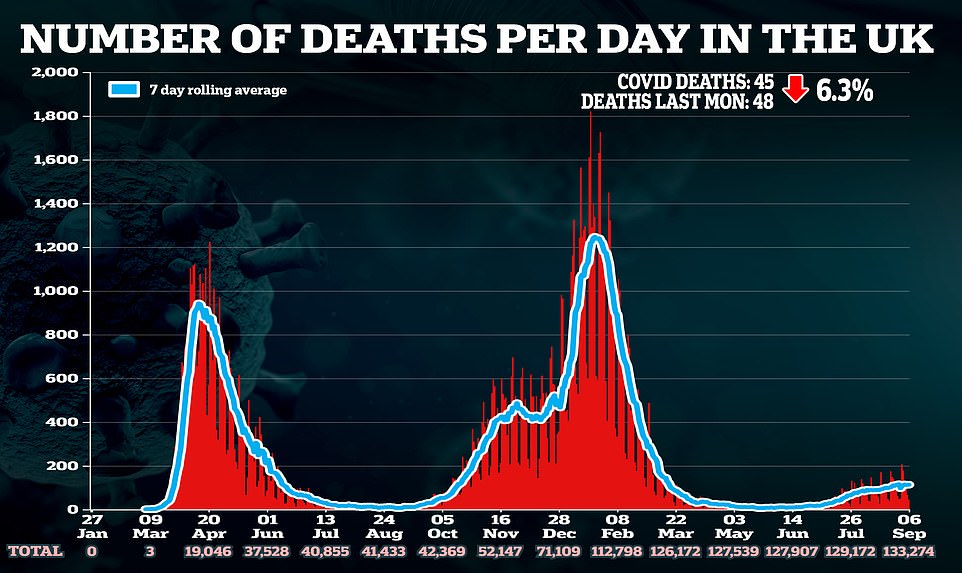 ‘Professor Lockdown’ Neil Ferguson said today he believed Britain will press ahead with plans to vaccinate children to keep infections in schools manageable.

The epidemiologist and SAGE adviser — whose modelling spooked ministers into the initial lockdown in March — said he expects Professor Chris Whitty and the other chief medical officers to approve the move.

The Government has made no secret of the fact it wants to immunise secondary school-aged children after seeing cases spiral in Scotland when schools returned from the summer holidays last month.

Professor Ferguson from Imperial College London said today: ‘On balance, I think we will probably move to vaccinating 12 to 15-year-olds.

‘The question becomes even finer going into younger age groups, but focusing on teenage secondary school children I think we will move in that direction.’

He added: ‘It would not surprise me if the chief medical officers… would decide to go forward with vaccination (of 12 to 15-year-olds).’

The Joint Committee on Vaccination and Immunisation (JCVI) advises the Government on who should receive vaccines.

Scientists are divided over whether 12 to 15-year-olds should get the Covid vaccine, with some SAGE members backing the move yesterday arguing it would help to head off a surge in infections later this winter.

But experts admit routinely jabbing them might only bring cases down by 20 per cent.

Others have argued it would be ethically dubious to inoculate the age group when millions of people in poorer countries are still waiting to be vaccinated.

Professor Ferguson added that Scotland’s Covid cases may already be plateauing barely a fortnight after the country’s schools returned from the summer holidays.

Cases more than doubled on the back of Scottish classes returning from the summer break on August 18 and there were fears the rest of the UK would be hit with a similar surge with millions of pupils heading back today.

But latest data from the UK Government’s Covid dashboard suggests that while case numbers are still very high in Scotland, they no longer appear to be growing.

The number of people testing positive nationally appears to have peaked at a record 7,113 on August 29, after surging from around 2,500 in the week schools went back.

But the seven-day average for infections — which rose to 6,000 on August 30 — is now hovering just below this level, in a sign the country’s outbreak may no longer be growing. Today Scotland recorded 7,065 cases.

Professor Ferguson said the data suggested ‘the hint of a plateau’ in infections.

It is an encouraging sign for the rest of the UK that suggests that even if other countries are hit hard with a big bang in cases over the first couple of weeks after schools return it will not be long lasting.

Professor Ferguson, warned England had some ‘difficult weeks ahead’, however, because of the surge in cases predicted to hit over the winter months when the NHS is under the greatest pressure.

England has followed Scotland’s Covid trajectory this summer with cases spiralling in both countries following their national team’s success in the Euros.

As children head back to the classroom in England infections are 13 times higher than they were last September, when the end of the summer holidays then sparked the second wave.

It comes amid calls for 12 to 15-year-olds to be offered the Covid vaccine, with some SAGE advisers arguing that it would help to head off a surge in infections later this winter.

But others have argued it would be ethically dubious to inoculate the age group when millions of people in poorer countries are still waiting to be vaccinated.