People have been taking advantage of the much anticipated Bank Holiday weekend, celebrating the end of some lockdown restrictions with the added bonus of some sunshine.

Pictures show that party-goers were out in force across the country, celebrating the arrival of some late spring sunshine and being able to meet up with friends in bars following the relaxation on some of the lockdown rules on May 17.

City centres such as Leeds, Birmingham and Newcastle were particularly busy, with pictures showing people enjoying their first proper night out of the year.

Some were seen taking off high heels at the end of their night, particularly painful after a year in lockdown in flat shoes, while others were captured hugging each other since the relaxed rules on contact were announced.

Other images showed the sheer amount of people descending on pubs, bars and restaurants. 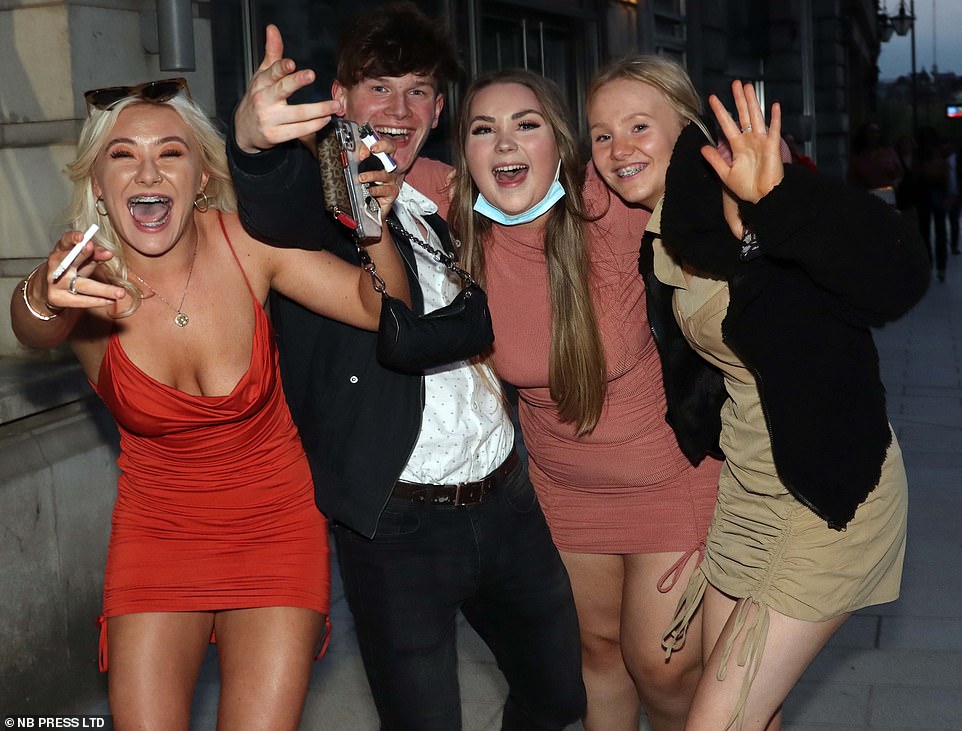 Revellers in Leeds were out in force on Saturday evening to celebrate the long-awaited Bank Holiday weekend when lockdown restriction rules could be relaxed. Pictured – four friends meet up to celebrate in Leeds city centre 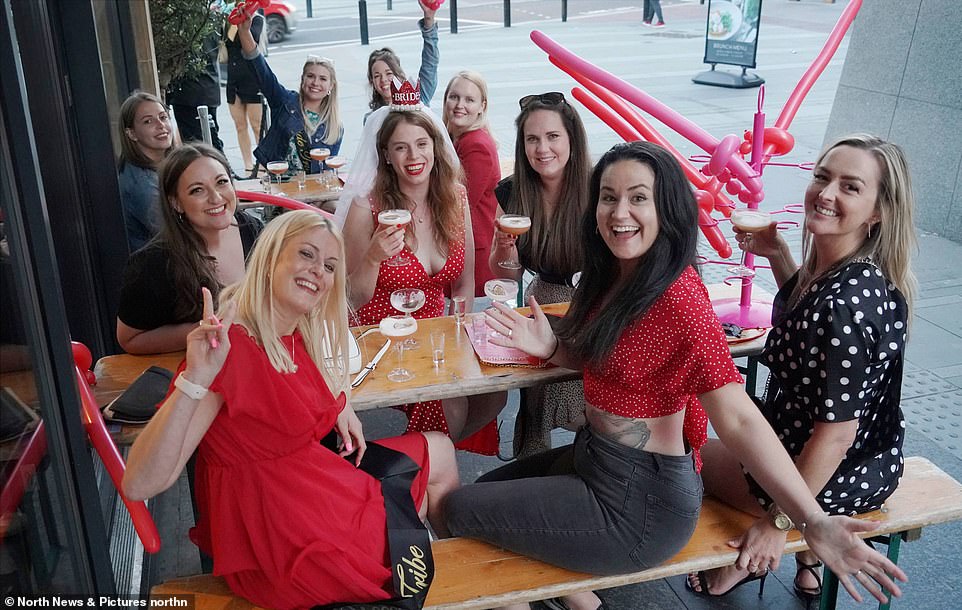 Hen parties were finally able to go ahead again in style across the country, like this one in Newcastle on Saturday night 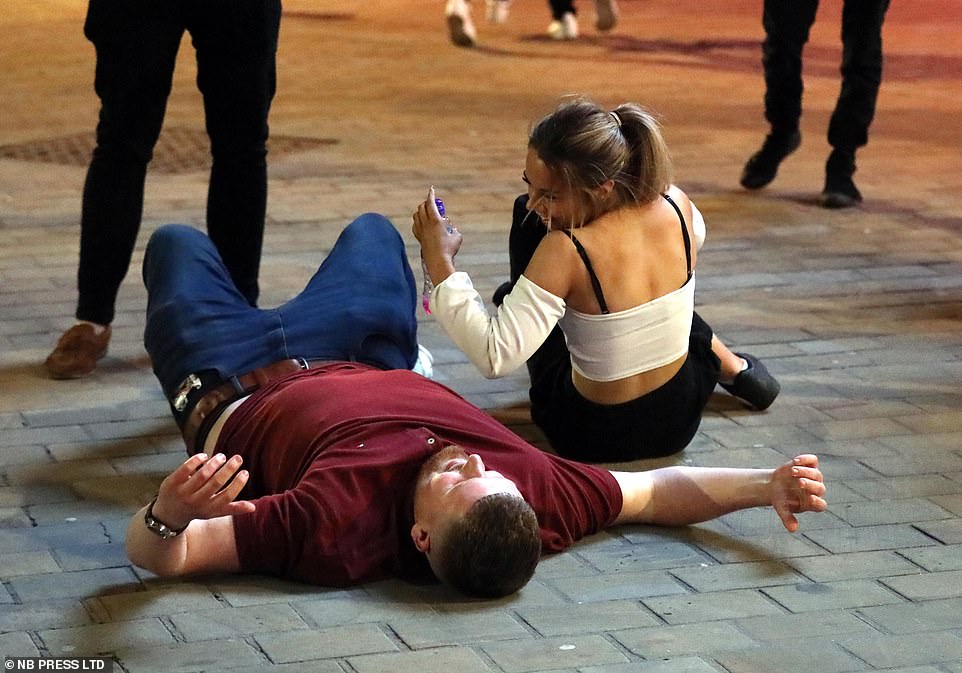 Pictured a man lies on the floor laughing with another woman, who were among those celebrating their reunion with friends 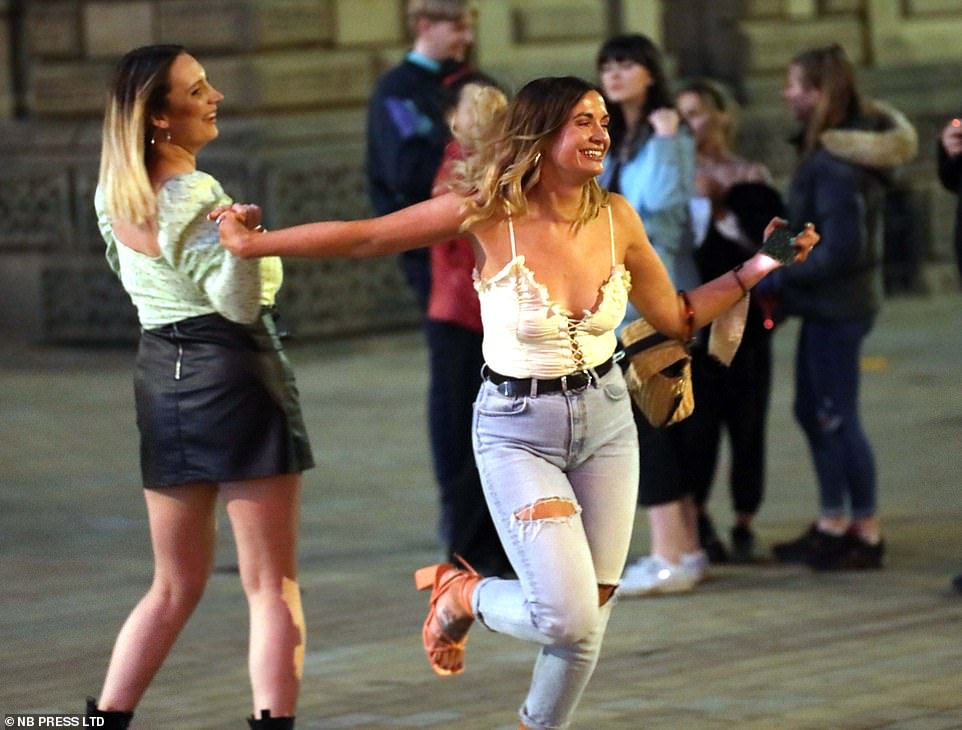 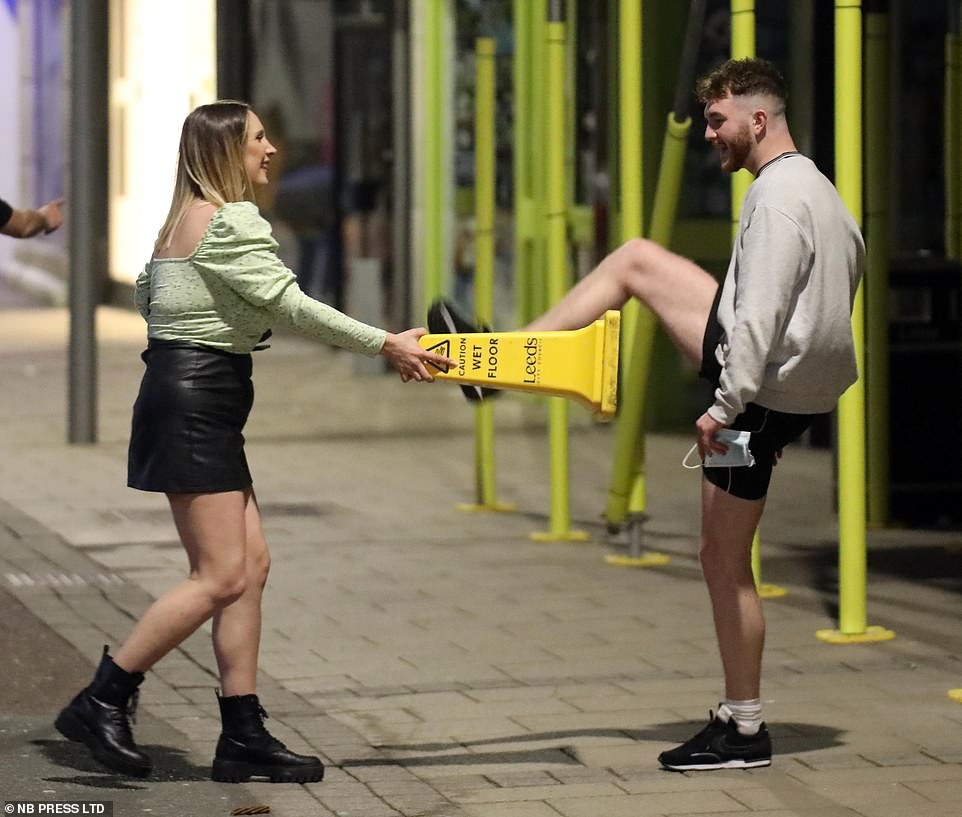 Some people were up to their old antics as they marked the special occasion. Pictured a girl points a wet floor sign at a boy, who is laughing and lifting his leg. He holds a face mask in his hand, which has now become part of the new normal 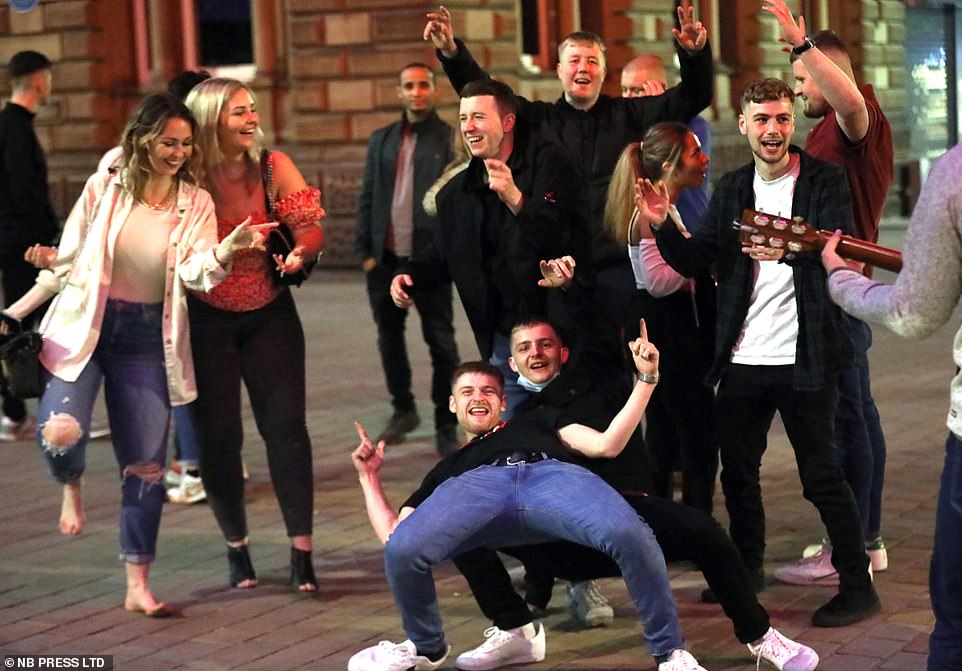 Not only were crowd delighted to reunited with others, they also got the added bonus of some live music to accompany them to the pubs and bars, with buskers performing and people dancing their way down the street in Leeds.

It was also a night of celebration for Chelsea fans after the club’s Champions League win, and sun worshipers as temperatures hit 23C.

It’s likely that the good weather will remain with us over the long weekend, with forecasters predicting highs of 25C in some parts of the country on Bank Holiday Monday.

The long-anticipated late arrival of spring sunshine comes after the third stage of Prime Minister Boris Johnson’s roadmap to freedom was launched on May 17. 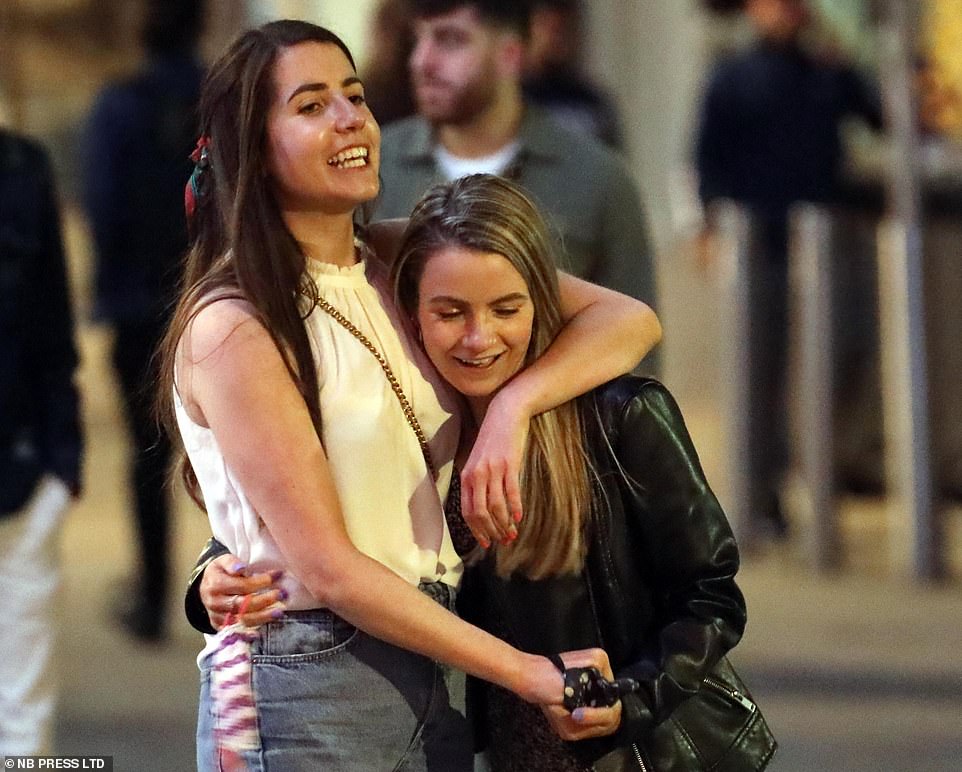 It was the first gathering since restrictions on hugging were lifted. Pictured two girls throwing their arms around each other. 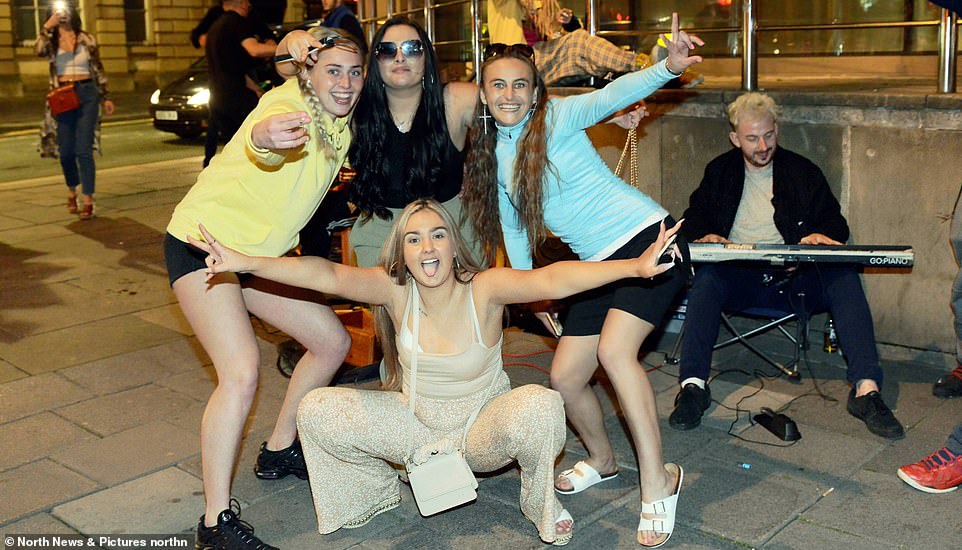 Revellers enjoy a Saturday night on the town as drinkers make the most of the Spring Bank Holiday weekend in Newcastle. In the background, a busker plays piano to accompany people who are walking through the city centre 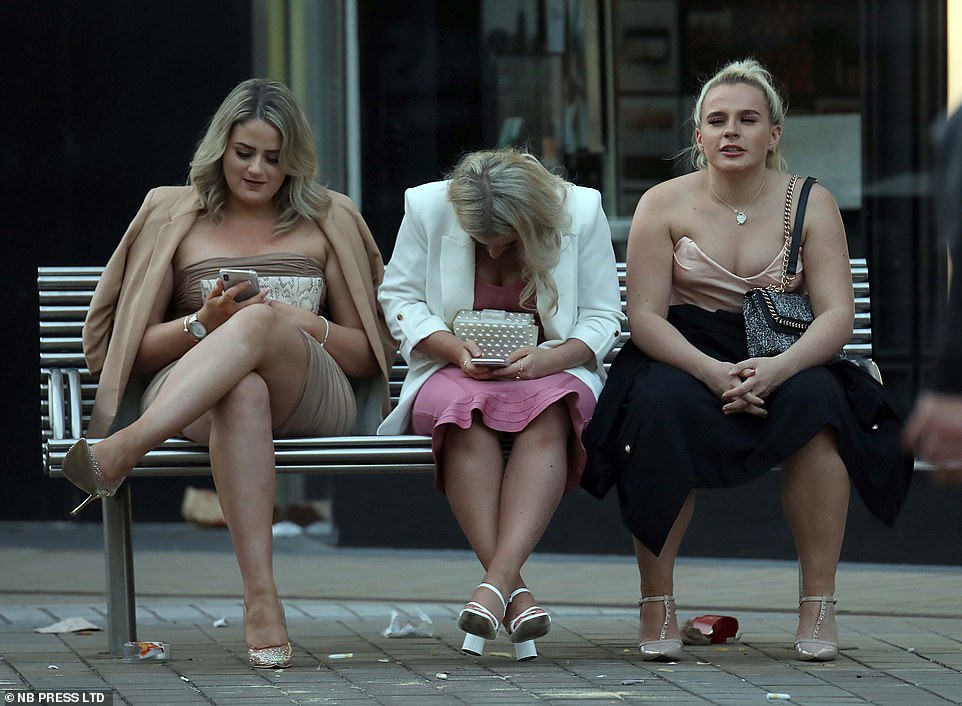 But the night proved to be too much for some people, particularly those wearing heels, who needed to sit down on a bench 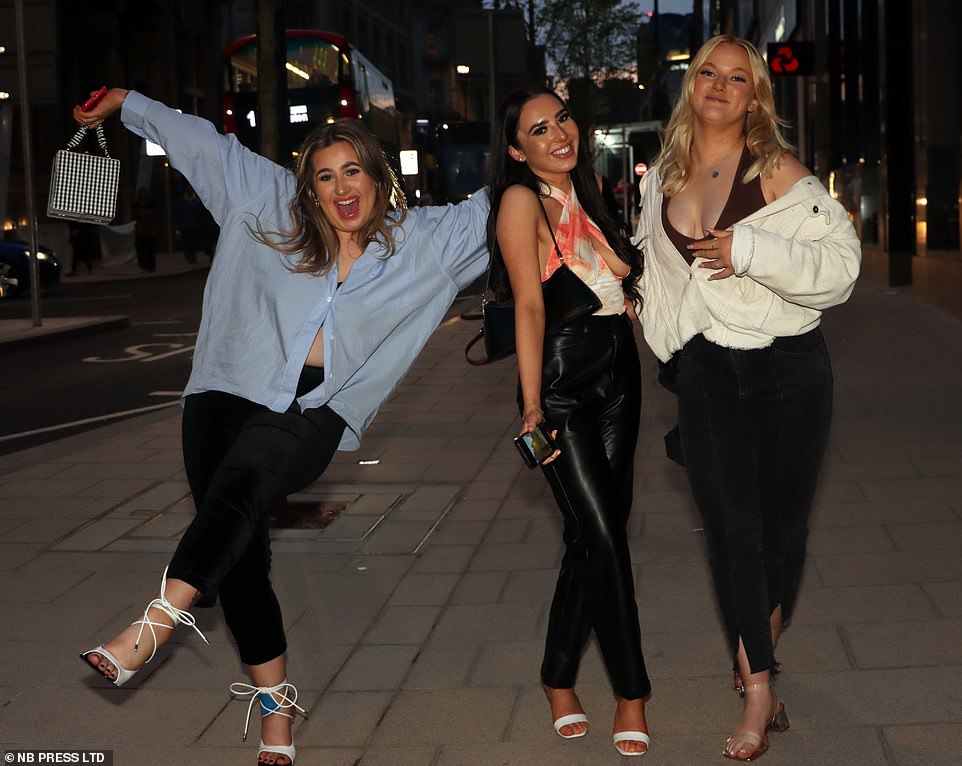 Pictures show friends having long-awaited reunions with pubs, bars and restaurants in Leeds on Friday evening 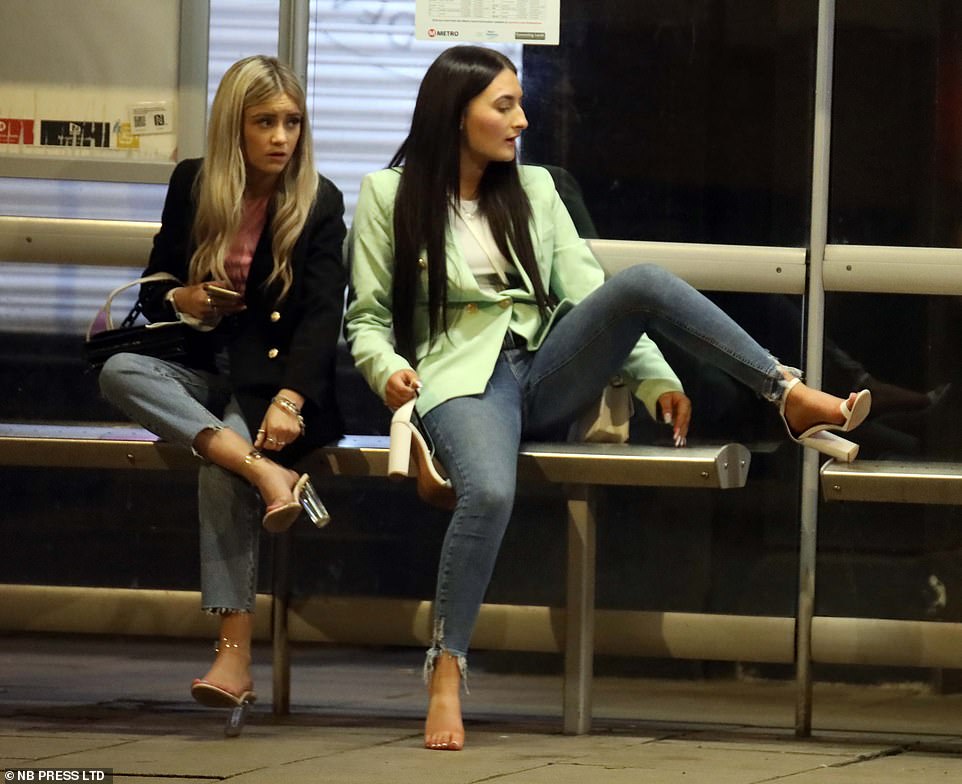 Wearing heels may have been a bit of a challenge after spending so much time in lockdown last year. Pictured two girls sit in a bus stop to remove their painful shoes 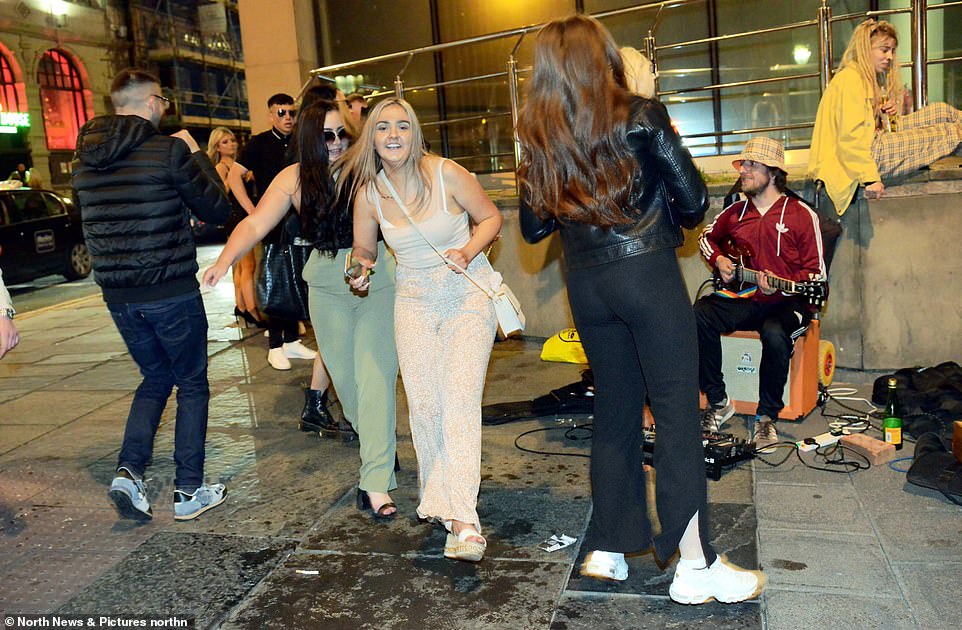 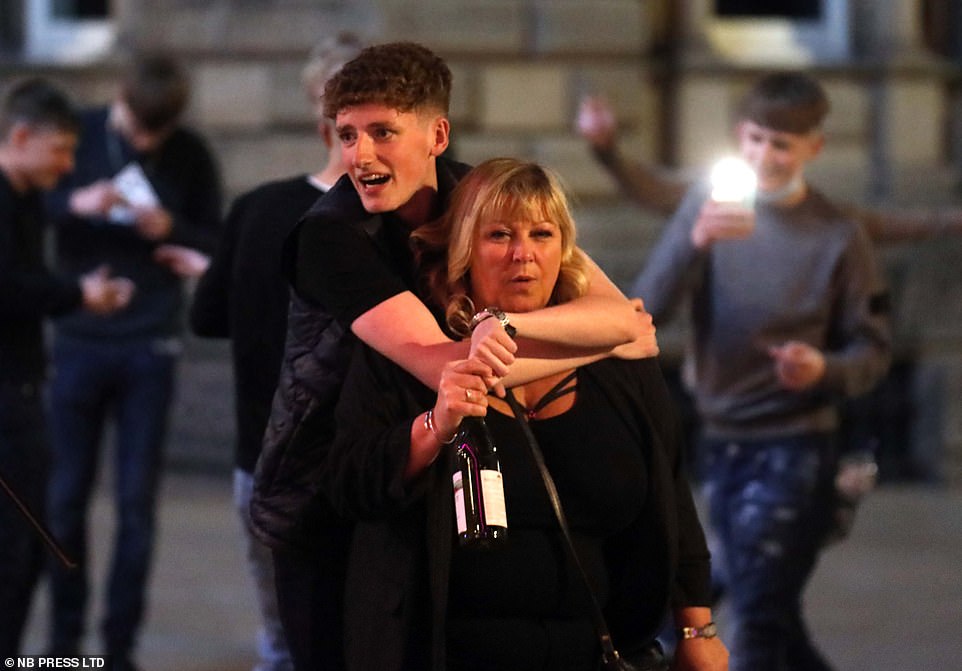 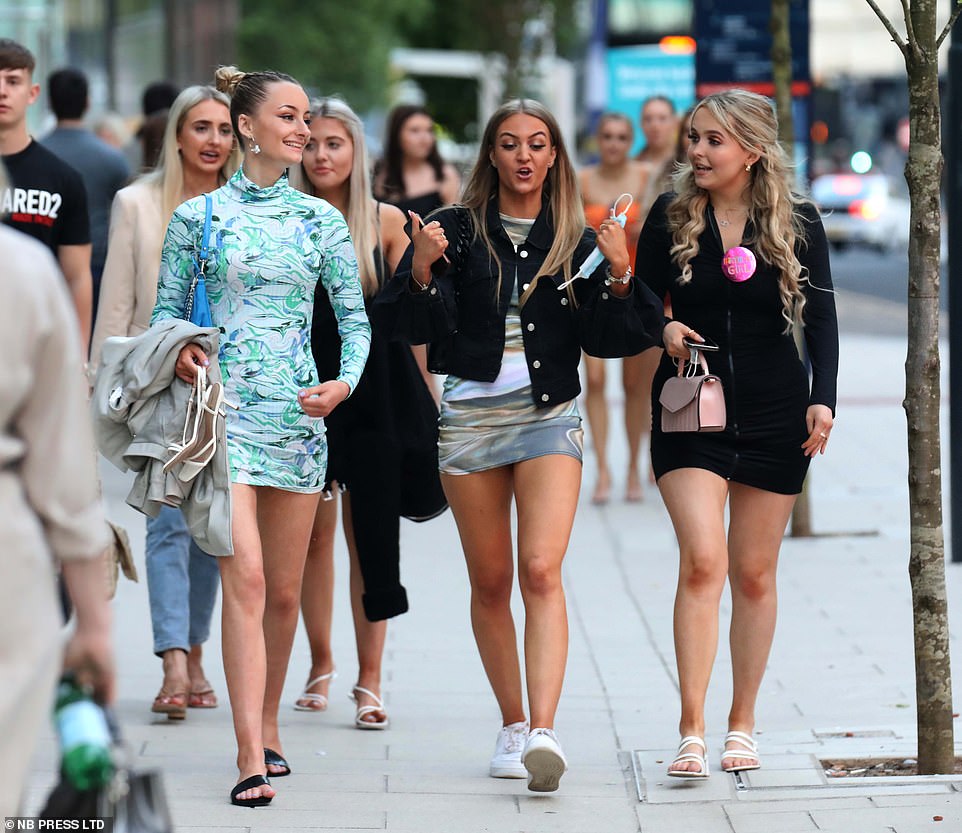 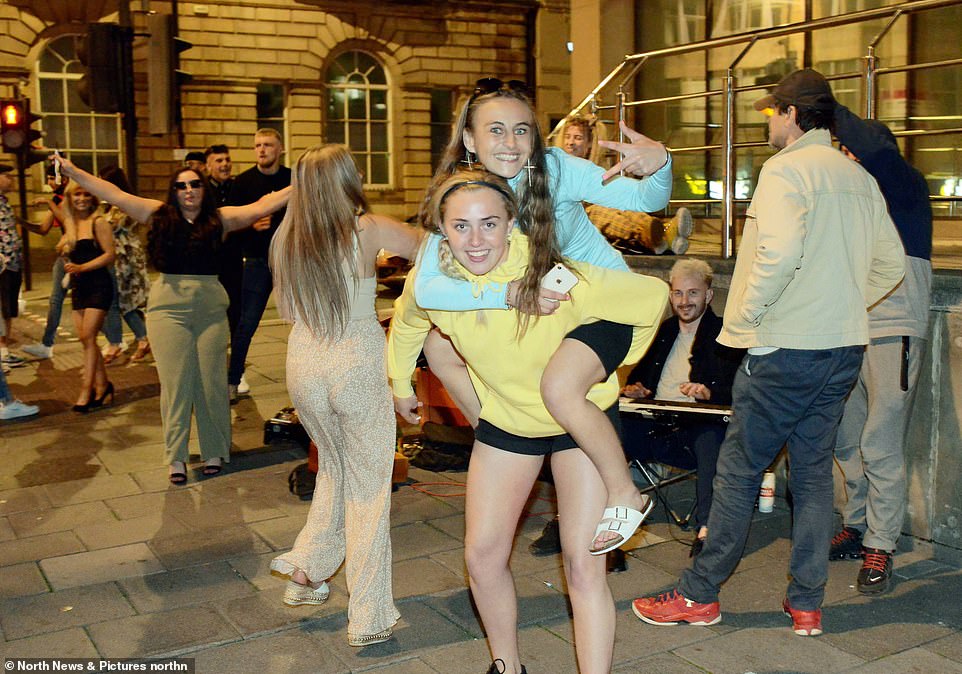 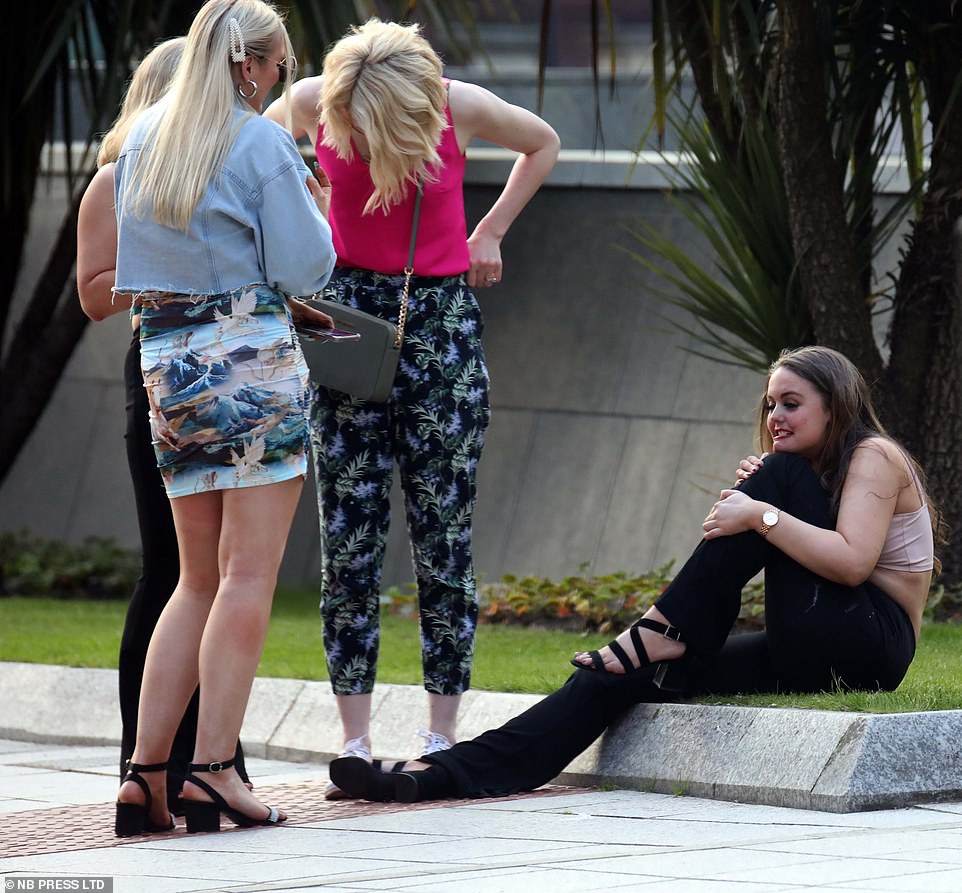 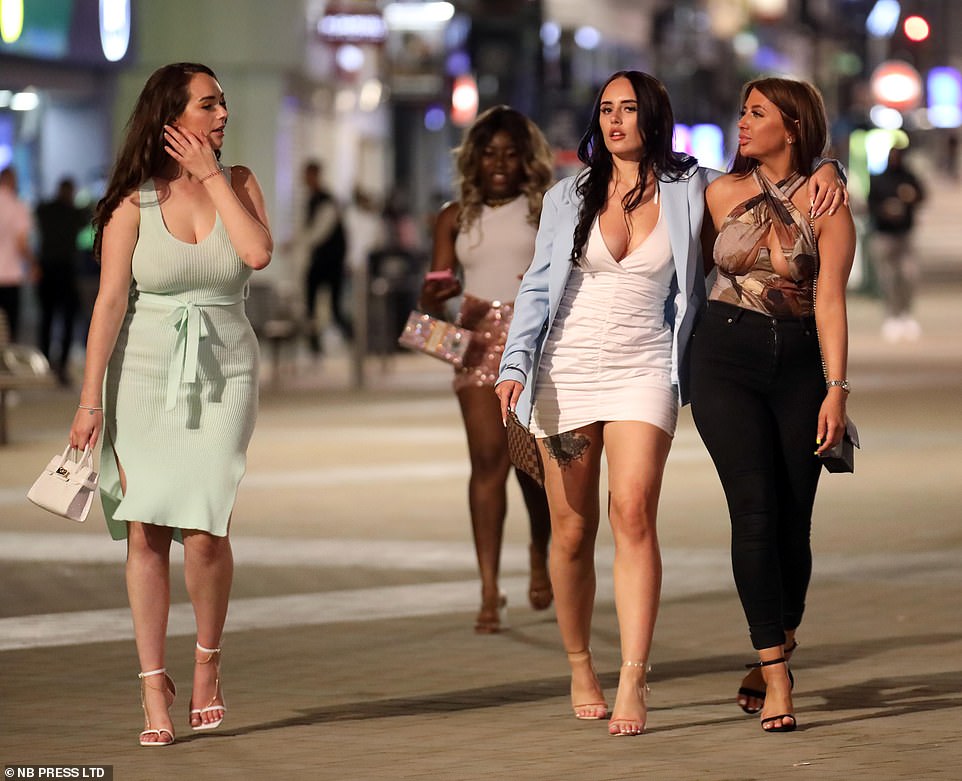 Three women walk and chat, with two holding each other as restrictions on physical contact have lifted this month

Since then, people have been able to hug friends and family members, sit inside with them, and jet off on holiday abroad.

All restrictions are set to lift on June 21, meaning life will return to the closest to normal since lockdown began, with clubs reopening, sport events and festivals being able to take place and social distancing rules being scrapped.

It is thought that working from home and wearing masks in public spaces will still be enforced.

There are concerns a return to normality could be delayed due to the spread of the Indian mutation.

Earlier this week, eight areas of England were put under stricter restrictions amid spikes in cases of the Indian variant of the virus.

People have been warned not to travel Bolton, Blackburn with Darwen, Kirklees, Bedford, Burnley, Leicester, Hounslow and North Tyneside amid cases in those areas. 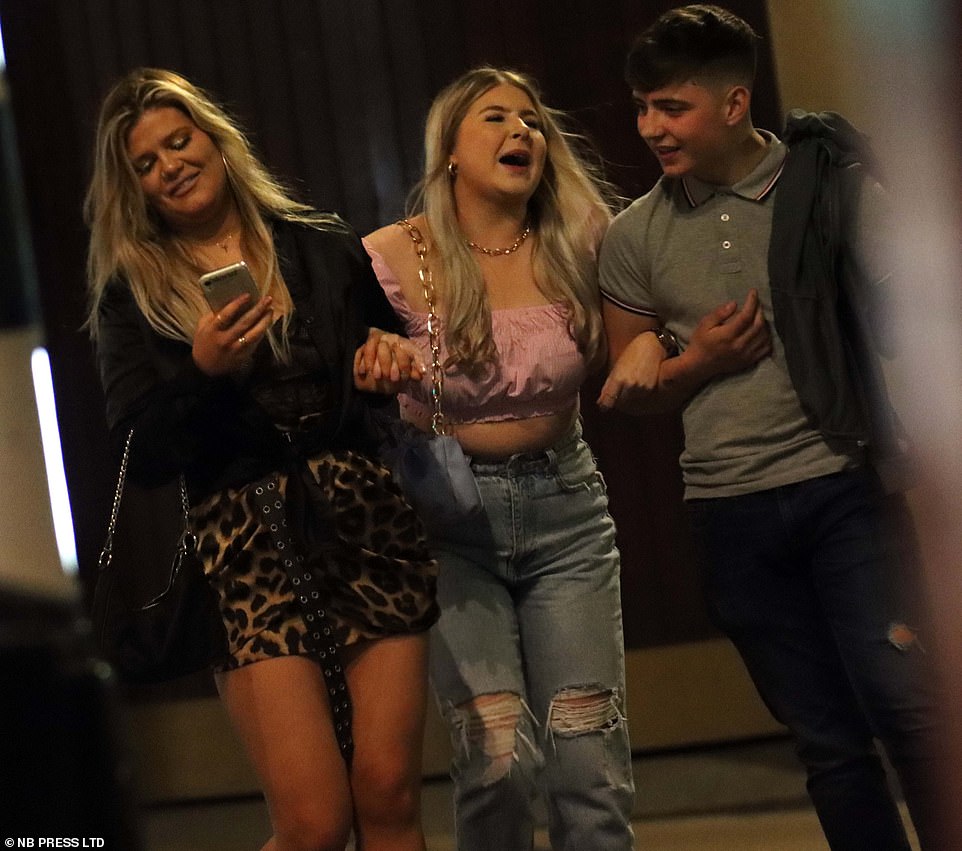 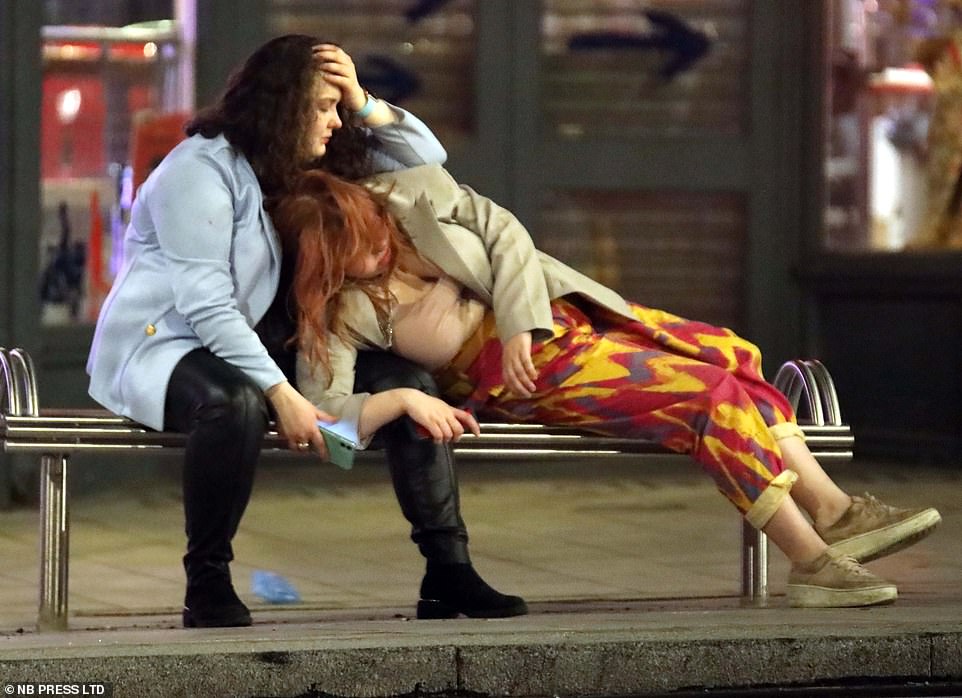 All the fun and alcohol proved to be a little much for some people, who may have sore heads on Sunday morning 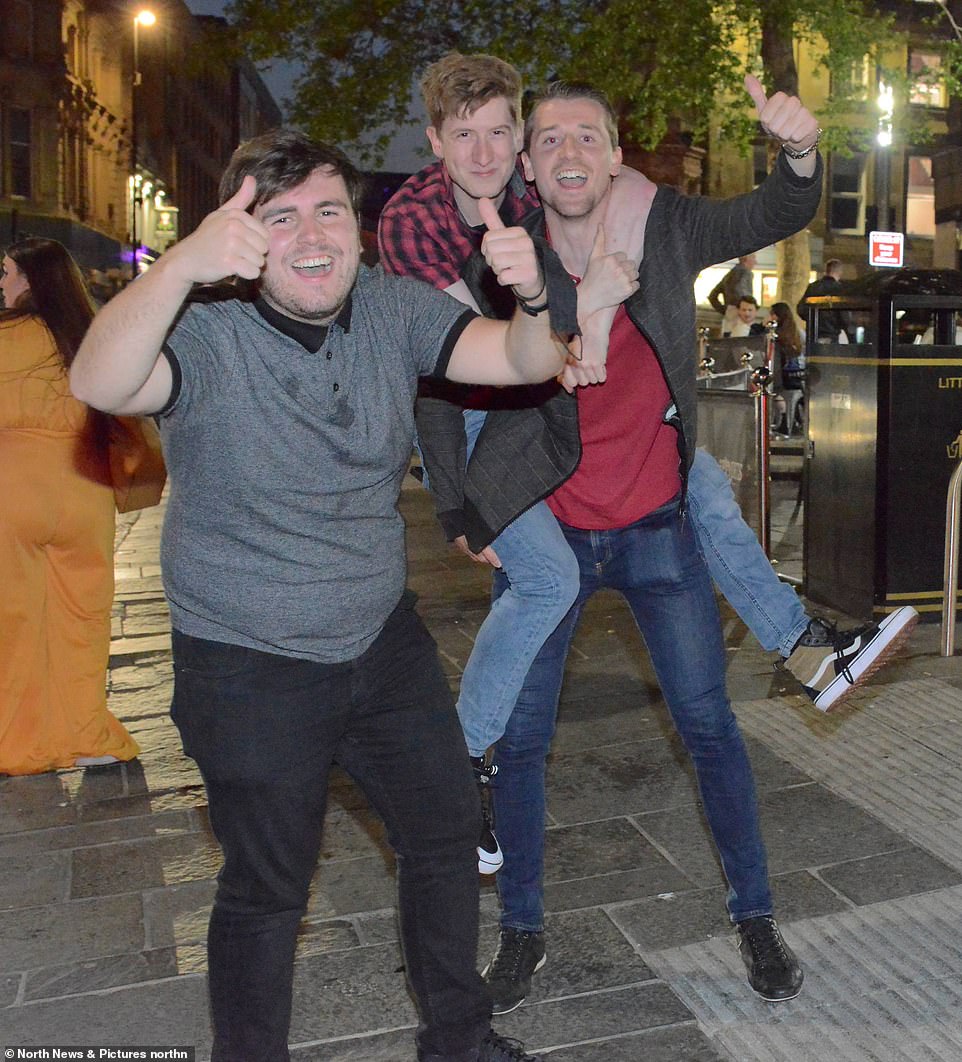 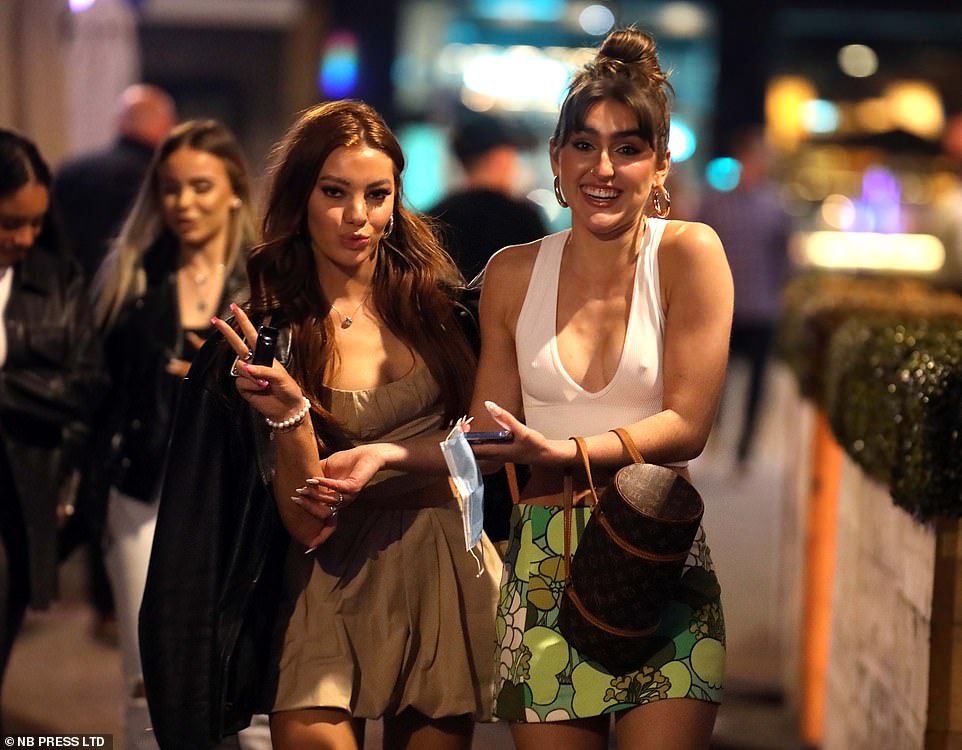 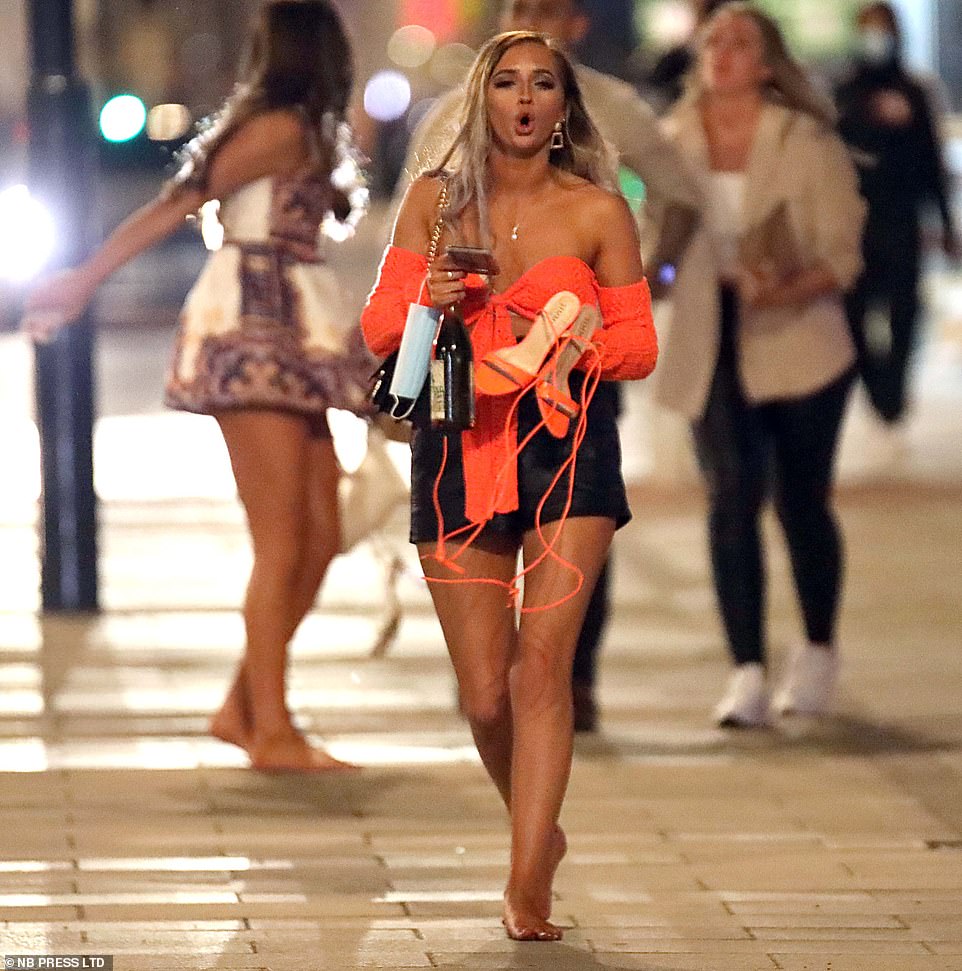 Some people had to remove their shoes after a long time at home in comfortable footwear, with many carrying theirs home 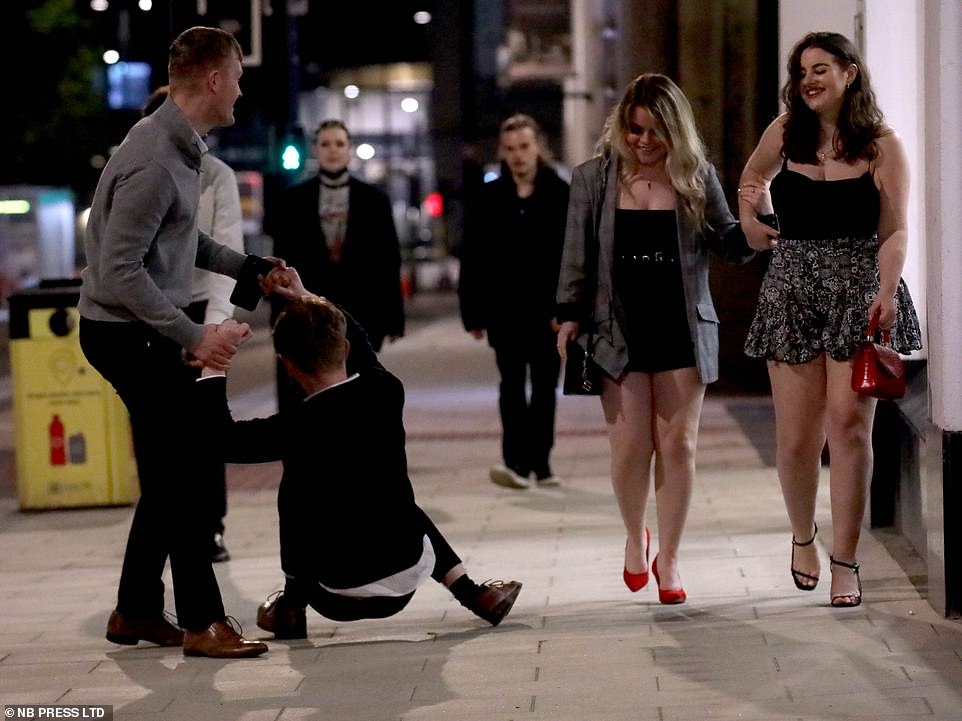 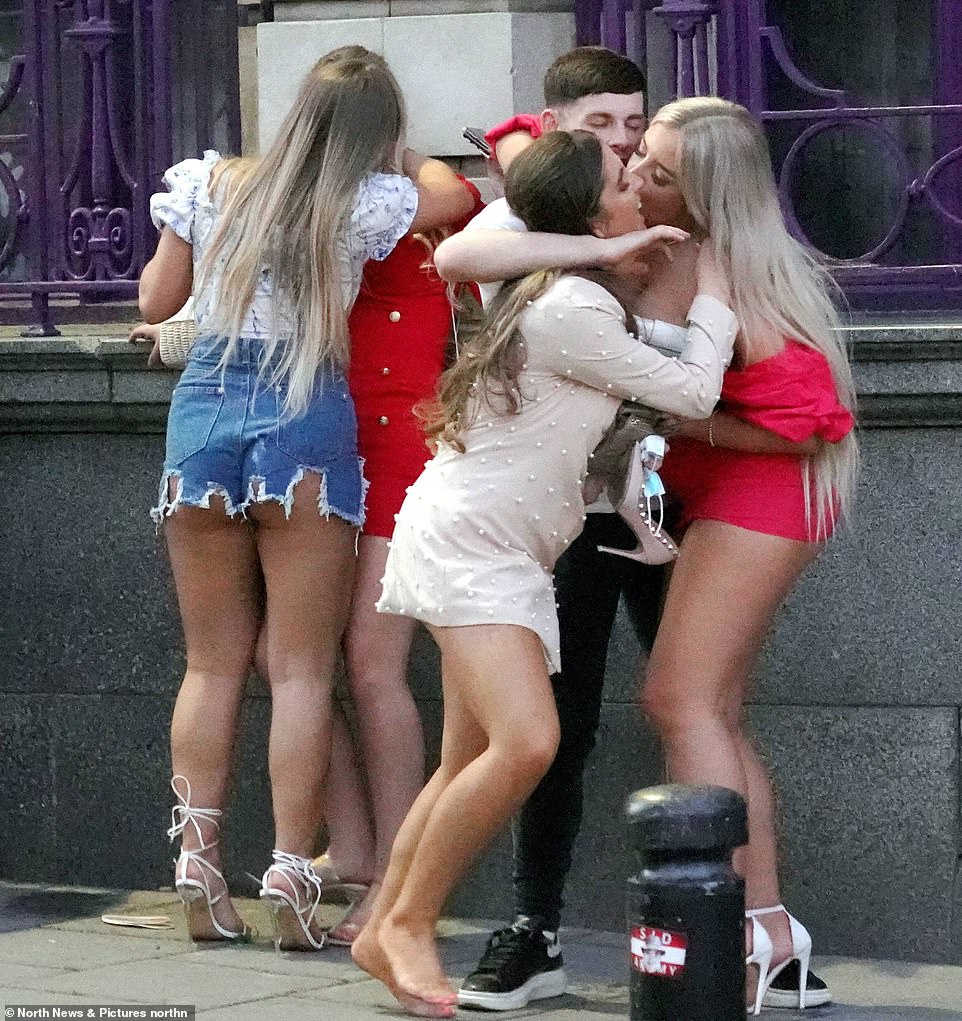 For some in Newcastle, it was the first time they were able to physically hug each other after the relaxation of rules 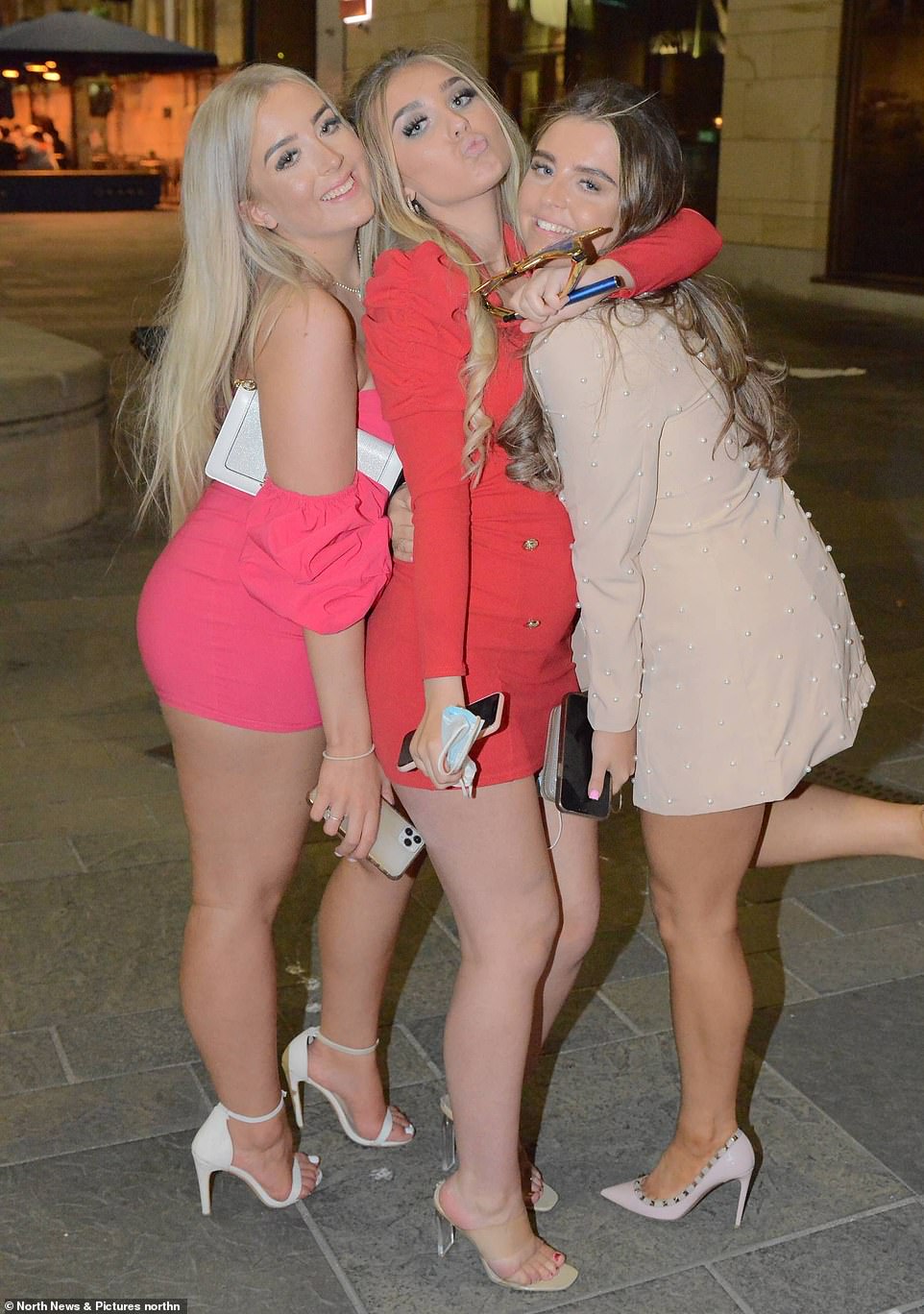 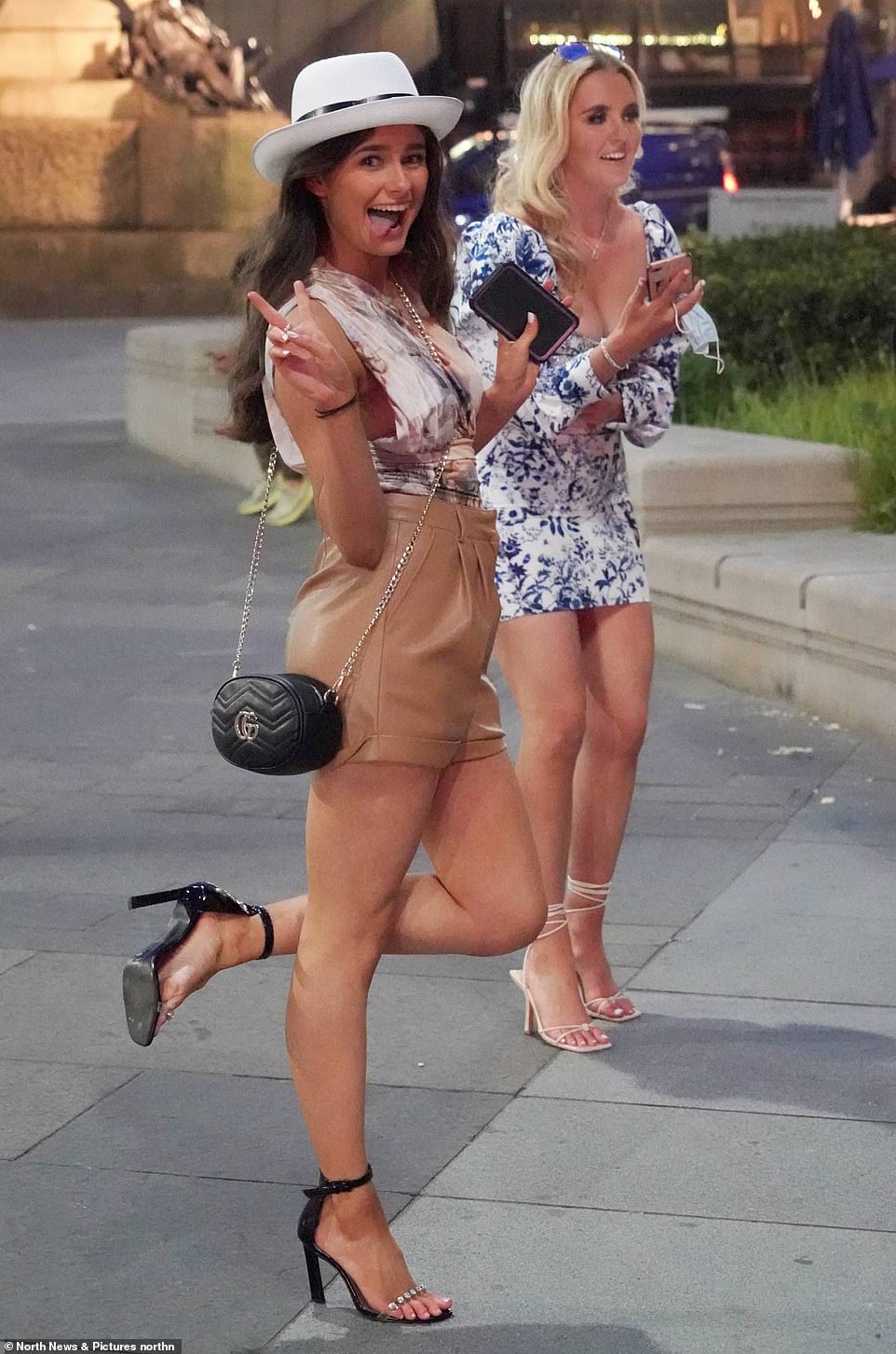 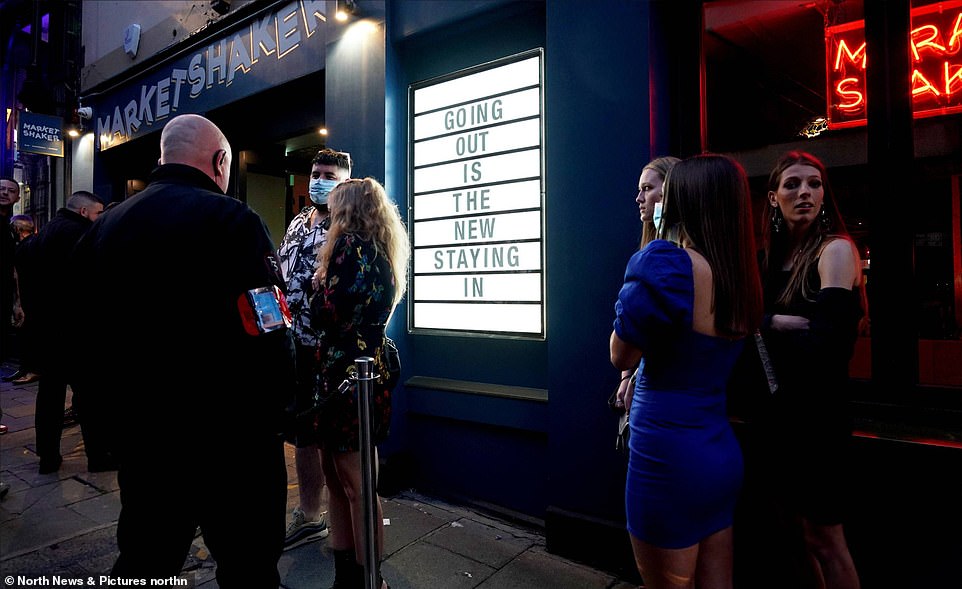 Pubs, bars and restaurants welcomed punters back with open arms on the Bank Holiday weekend in Newcastle

However, Britain’s vaccination programme means that three-quarters of adults will have  received at least one Covid jab within days – and almost half will be vaccinated with both doses before the end of the week.

The number of Covid patients being treated in hospital also continues to fall.

Cases have also risen 23 per cent week on week, with 21,469 recorded in the past seven days.