Bank Holiday Monday could be the hottest day of the year so far – with temperatures predicted to hit 77C in parts of the UK.

It comes hot on the heels of two days of glorious weather over the long weekend, which sent Britons flocking to parks and beaches as well as pubs and restaurants now that Covid-19 restrictions have mostly been lifted.

Yesterday, thousands of sun-lovers made the most of the sizzling weather which came after weeks of miserable rain.

The Met Office’s stats show the UK has already had its fourth wettest May on record with an average of 199mm falling.

However, there is no sign of rain in the near future, with the spell of summer sunshine now expected to last more than two weeks.

Becky Mitchell, a meteorologist from the Met Office, said the mercury could reach 77F (25C) on Monday – surpassing the high for 2021 so far, which was set on March 30 at Kew Gardens when the temperature hit 76F (24.5C).

And, according to BBC Weather, temperatures will remain at around 74F until at least the middle of June.

People out early for swimming and enjoying the heat on Branksome beach, Bournemouth on bank holiday Monday 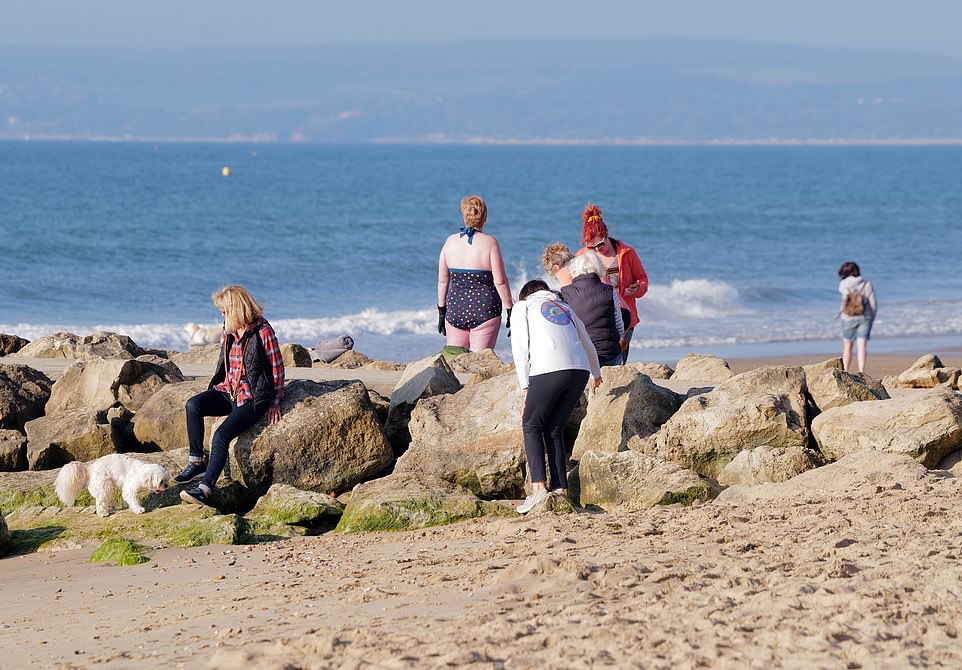 Becky Mitchell, a meteorologist from the Met Office, said the mercury could reach 77F (25C) on Monday 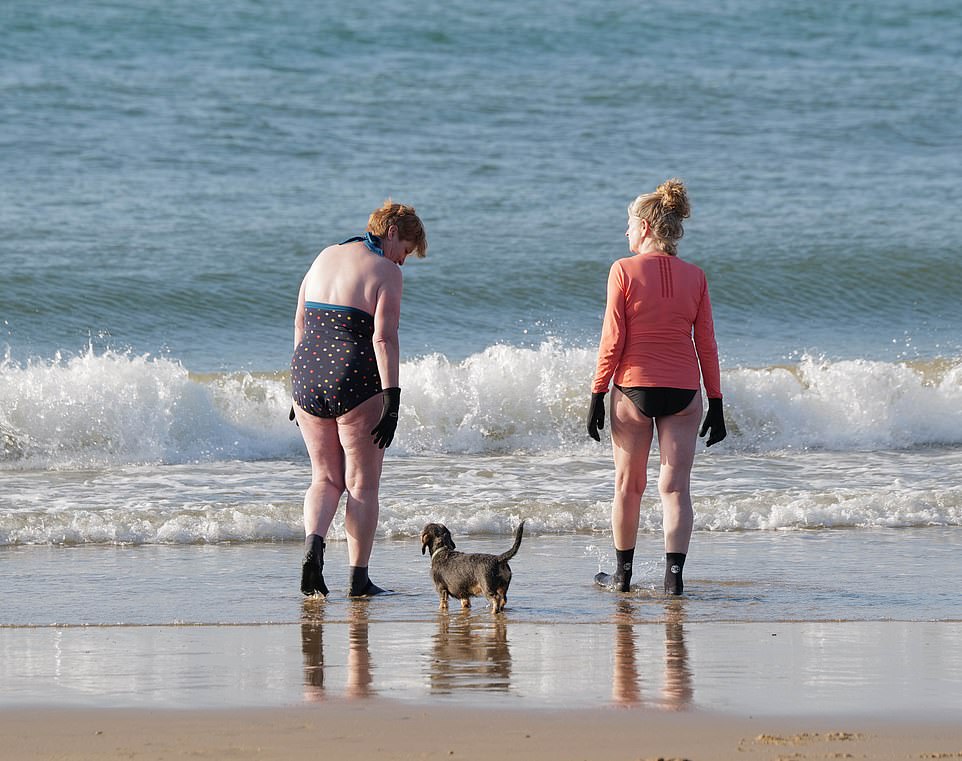 Today’s temperature could surpass the high for 2021 so far, which was set on March 30 at Kew Gardens when the temperature hit 76F (24.5C) 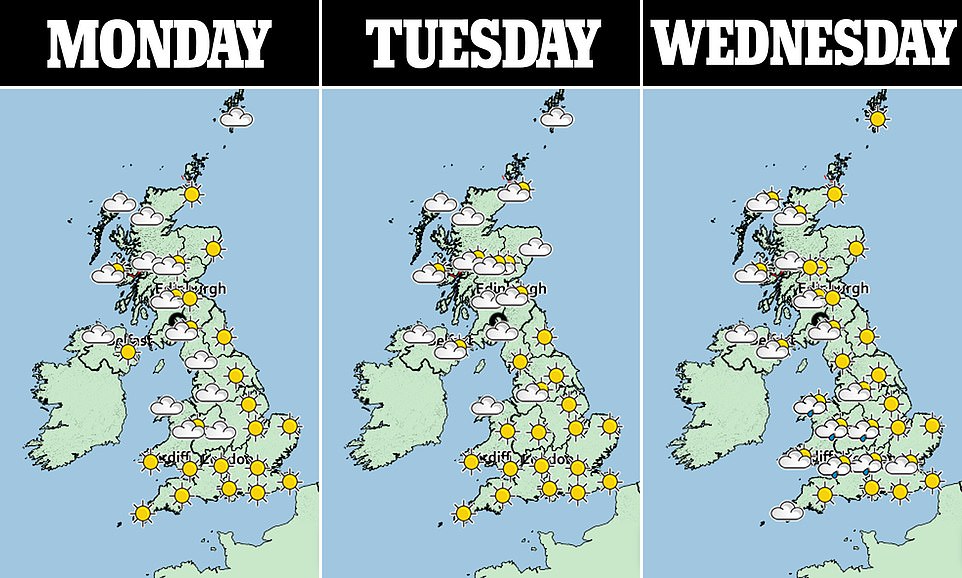 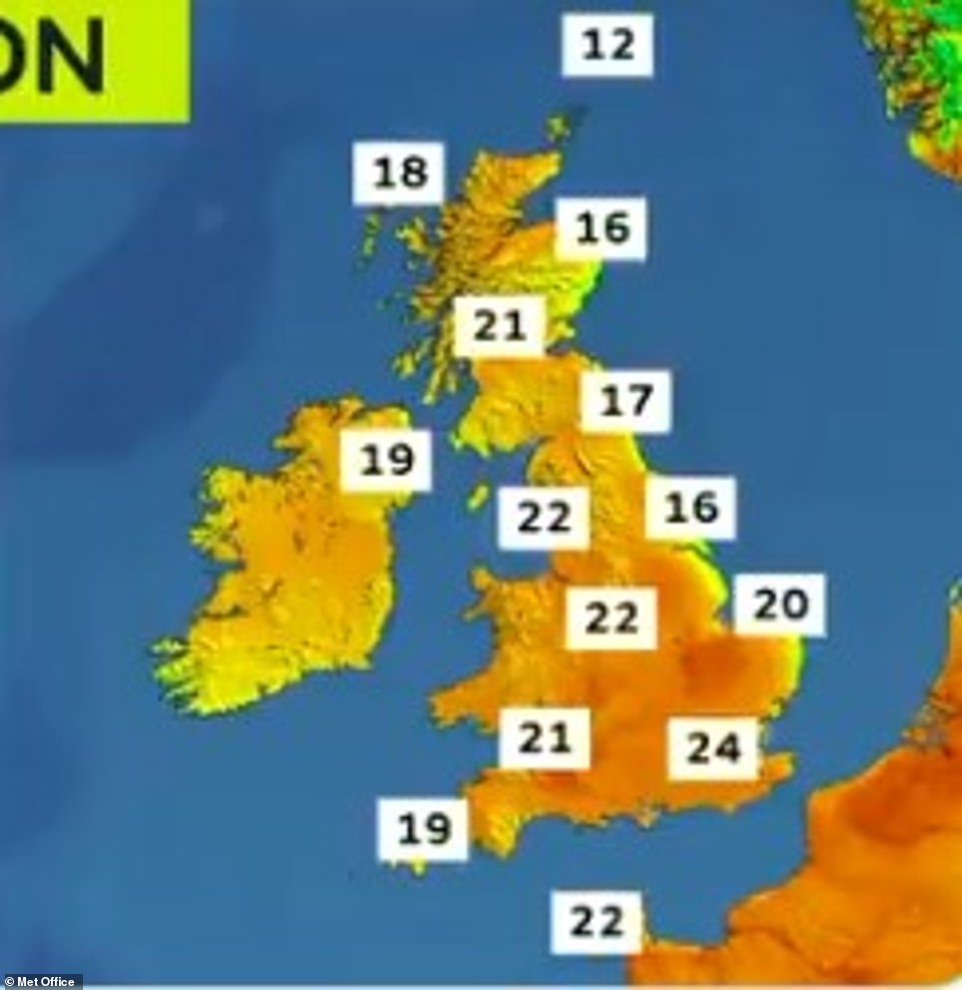 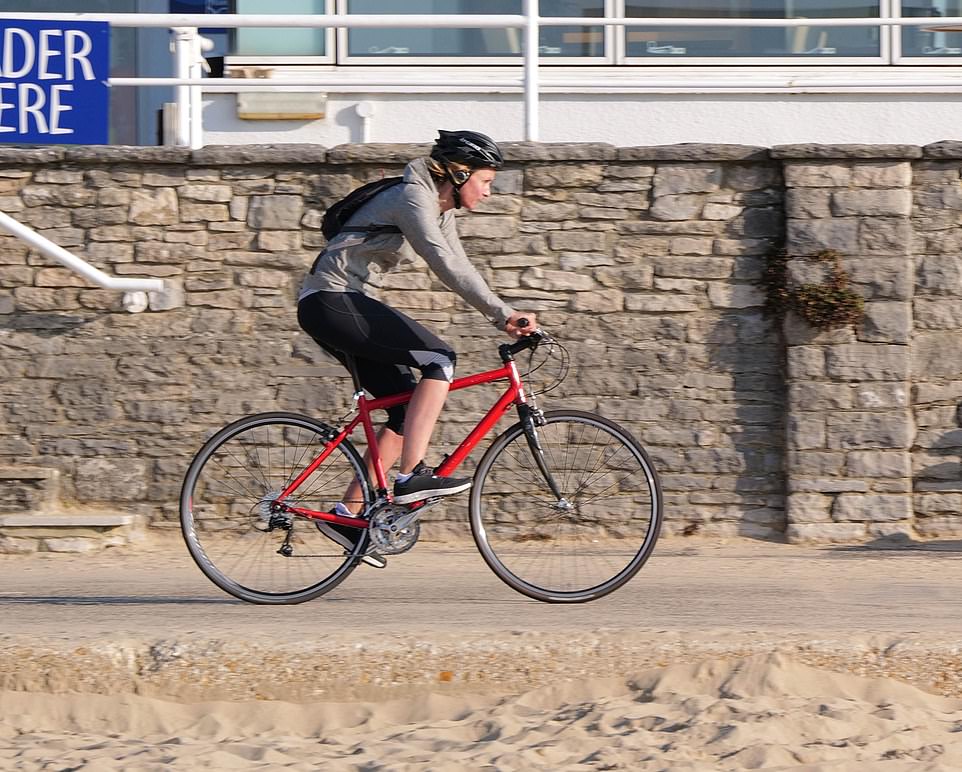 Temperatures are expected to be at least in the low 20s for most parts of the UK, even northern Scotland.

‘The only exception is along the east coast – there is quite a lot of low cloud, mist and fog in east coastal areas and that will stay for the next few days, so highs of between 12C (53.6F) and 16C (60.8F) there – quite a lot lower than elsewhere,’ Ms Mitchell said.

Temperatures are even expected to climb to 80.6F (27C) on Wednesday before cooler, fresher air moves in.

Photos from the weekend showed Britons making the most of the weather, with beaches and parks packed.

Party-goers were spotted out in force across the country on Sunday night, with the city centres of Leeds and Newcastle particularly bustling.

Day-trippers piled in to several picturesque seaside resorts across Britain and basked in glorious sunshine as they enjoyed clear blue skies on the packed beach on Lyme Regis, while punts and kayaks filled the River Cam in Cambridge.

Droves of lockdown-weary Brits made the journey to Devon in a bid to enjoy the hot weather – as roughly 75,000 visitors were expected at Brighton, with 50,000 at Bournemouth and 50,000 at Blackpool.

11 million daytrippers were clogging roads, RAC data showed, with traffic jams due on coastal routes including the A23 to Brighton, A31 to Dorset, A30 to Cornwall and M55 to Blackpool.

A local who visited The Imperial in Exeter said his family had to wait more than two hours for a round of drinks as the city’s beer gardens saw an influx of revellers to enjoy their time off in the sun.

It comes ahead of a scorching June – tipped to be the hottest on record – as 88F (33C) ‘European heat pulses’ bake the country.

Holidaymakers, day trippers and locals flocked to the picturesque seaside resort of Lyme Regis to soak up scorching hot summer sunshine on the May Bank Holiday Weekend 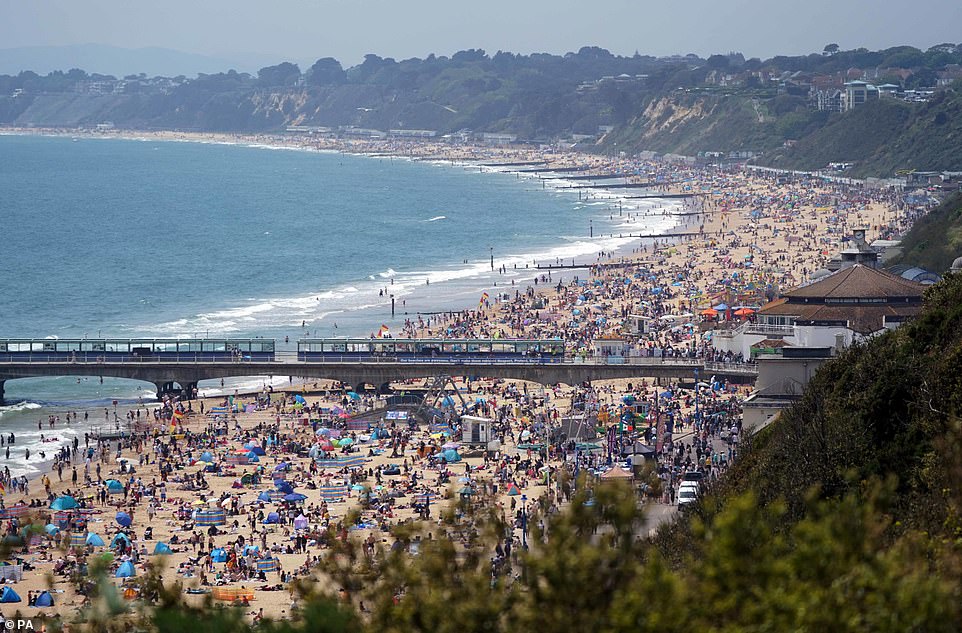 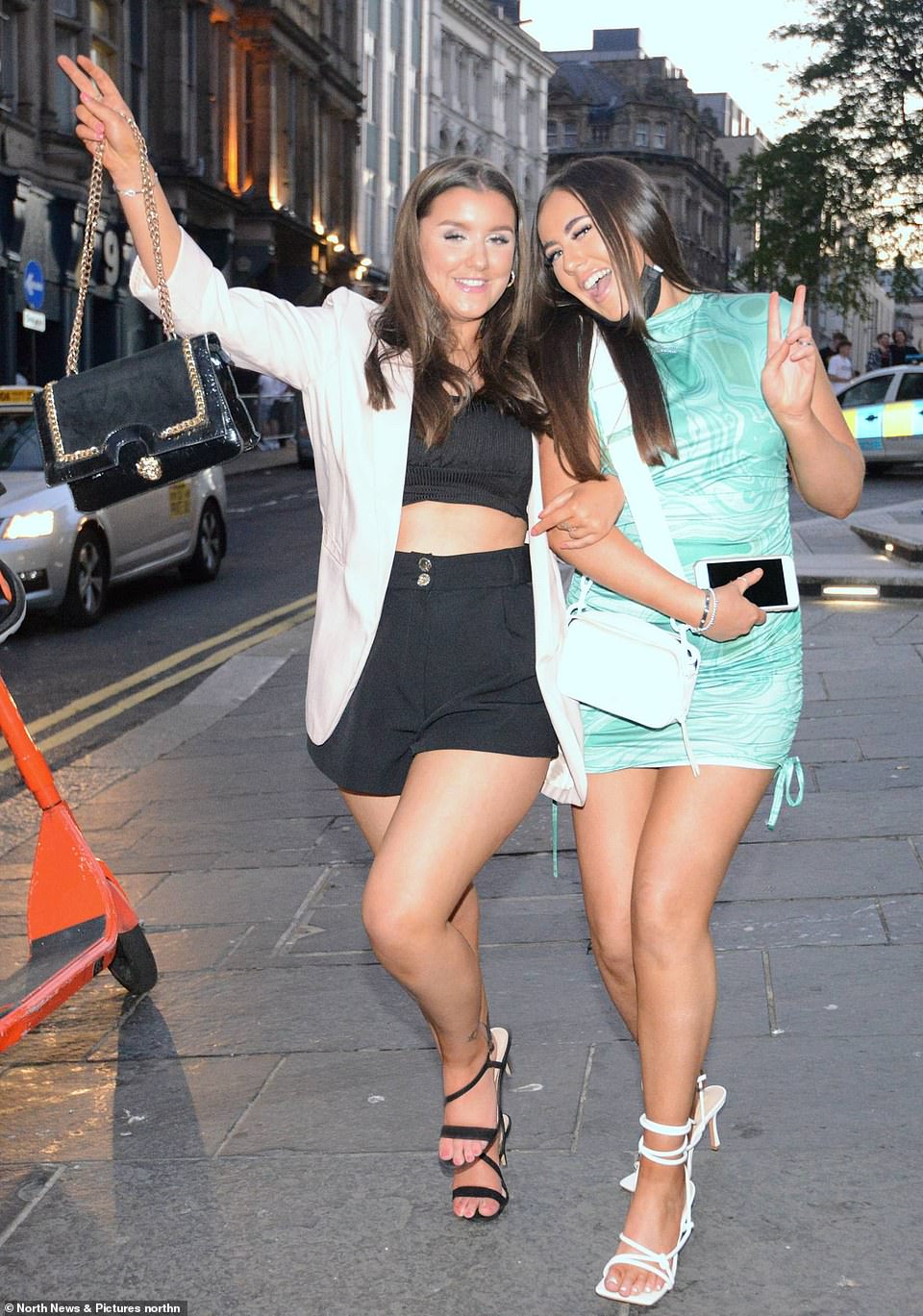 Forecasters at the Met Office warned people to slap on plenty of sun cream as UV light levels will be high or very high.

However, Ms Mitchell warned there could be some thunderstorms for some parts of the UK on the way.

‘There will potentially be some thunderstorms by midweek, the first bout of showers will come into parts of the South West and there will be a few thunderstorms in that,’ she said.

The storms in the South West are expected to hit on Wednesday, with the South East due a bit of a soaking by Friday.

‘There’s a chance of some thundery break down in the south east and we could have some quite intense storms there,’ Ms Mitchell said.

‘There’s still a lot of uncertainty but with the warm and humid weather we are having we have the key ingredients for thunder storms.’

She continued: ‘The warmer weather will stick around until at least Thursday in most places, that’s when we could get some slightly fresher air coming in.

Although a fine bank holiday is rare, the temperatures are not unusual for the time of year, with the mercury usually sitting in the high teens and low 20s by late May.

The Met Office warned previously that levels of harmful UV light will be very high over the coming days, and advised people to wear plenty of sunscreen.

May has been the fourth wettest on record for the UK, and the wettest ever for Wales.