Pregnant women from black, Asian and ethnic minority (BAME) groups are up to eight times more likely to be hospitalised with Covid-19 than white women, a study has found.

NHS England is now recommending BAME mothers-to-be with mild Covid symptoms be fast-tracked into hospital due to their heightened risk of falling critically unwell.

The move follows an Oxford University study earlier this month that looked at 427 pregnant women admitted with the disease between March 1 and April 14, when the virus was growing exponentially in the UK.

More than half of patients were from a BAME background, despite only accounting for a quarter of the births in England and Wales.

The study found black mothers-to-be were eight times more likely to be admitted than white pregnant women, and the risk for Asians was quadruple that of whites.

NHS England is now telling doctors to ‘lower the threshold’ for admitting them to hospital due to the heightened risk.

It is also urging midwives to provide tailored support and advice to pregnant women from BAME backgrounds and discuss vitamin D supplementation.

The Oxford study, published in the British Medical Journal (BMJ), follows a string of damning research showing BAME groups are being disproportionately hit by Covid.

Scientists are struggling to pin down exactly why BAME Brits are more susceptible to falling ill with the virus.

But they believe it may be because minority groups in the UK have considerably higher rates of health problems that raise their risk of catching a severe bout of Covid-19, such as diabetes and high blood pressure.

Links to higher rates of vitamin D deficiencies are also being investigated by health chiefs in the UK.

People with darker skin need to spend more time in sunlight in order to get the same amount of vitamin D as a person with lighter skin, which makes BAME people living in Britain more likely to be deficient in the vitamin.

Pregnant women from black, Asian and ethnic minority (BAME) groups are up to eight times more likely to be hospitalised with Covid-19 than white women, a study of 427 expectant mothers struck down by the virus found 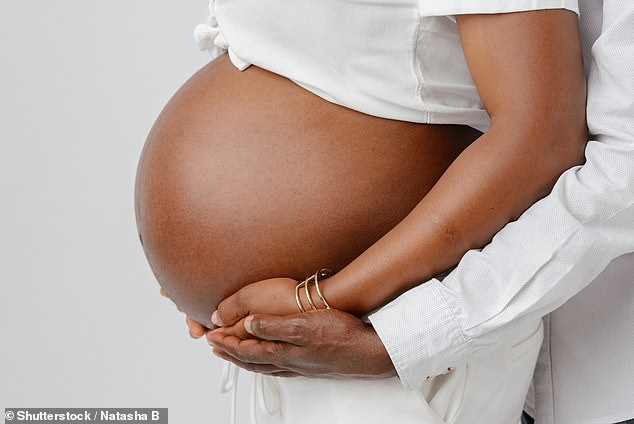 Currently the NHS recommends Brits take 10 micrograms of the ‘sunshine’ nutrient each day during lockdown ‘to keep your bones and muscles healthy’.

But it says on its website that ‘there is currently not enough evidence to support’ claims that the immune system-boosting nutrient reduces the risk of coronavirus.

Some babies born to coronavirus-infected mothers already have antibodies against the viral disease, one of the UK’s top doctors revealed today.

Dr Patrick O’Brien, vice president of the Royal College of Obstetricians and Gynaecologists, said a ‘very small’ number of newborns seemed to have developed an immune response against the virus while still inside the womb.

Antibodies are substances produced in response to infection and are stored by the immune system to fight off the same virus, if it returns in the future.

IgM antibodies – which the body makes when it first becomes infected – cannot be transferred from mother to child through the placenta, meaning the babies must have developed them on their own, scientists said.

IgM antibodies are formed early and essentially incite the immune system to destroy the virus, while other types – mainly IgG antibodies – store the memories of what to attack for years after someone has had an illness.

This suggests mothers pass the life-threatening disease to their unborn children in the womb, a theory that has been debated throughout the crisis.

Some experts had previously argued that babies with Covid-19 were catching it from their mothers after birth, or from an infected midwife or doctor in the hospital.

The finding was revealed in the UK’s first major study into coronavirus’s effect on mothers-to-be, which looked at 427 women infected with the disease across the country.

England’s most senior midwife, Jacqueline Dunkley-Bent, has written to all maternity units in the country calling on them to be extra vigilant with BAME pregnant women.

She wants these expecting mothers to have tailored support and advice, and access to vitamin D supplements.

Ms Dunkley-Bent has also urged doctors to lower the threshold for admitting these women to hospital, because they can fall severely ill with Covid quickly.

She said: ‘I want to make sure that every pregnant woman in England knows that the NHS is here for them – if you have any doubt whatsoever that something isn’t right with you or your baby, contact your midwife immediately.’

Gill Walton, chief executive of the Royal College of Midwives (RCM), told the BBC: ‘Even before this pandemic, women from black, Asian or ethnic-minority backgrounds had poorer pregnancy outcomes, and Covid-19 has sharpened this inequality further.

‘We support the steps the chief midwifery officer has asked maternity units to undertake and we are calling for these actions to be implemented swiftly. ‘

Pregnant women are no more likely to catch coronavirus than anyone else, with the majority of expecting mothers experiencing flu-like symptoms.

But as a precaution, pregnant women are being advised to be stricter than the rest of the public when it comes to social distancing.

The Royal College of Midwives advice is to ‘call your midwife if you have a cough, are breathless or feel hot and shivery’.

If you are worried about your baby’s movement or are concerned about losing too much blood, ‘call the midwife immediately’.

The Oxford study found that 70 per cent of pregnant women admitted to hospital were obese – another huge risk factor for Covid.

Thirty-four per cent of them had underlying health conditions, including diabetes and high blood pressure, which also make Covid more deadly.

But when these factors were taken into account, there was still a much higher proportion from ethnic minority groups than expected, the authors said.

The researchers behind the Oxford University study said the findings about BAME mothers now require ‘urgent investigation and explanation’.

This was still the case when mothers-to-be in hospitals in major cities, where the virus was spreading much quicker, were excluded from the analysis.

During the research, five pregnant women died, three of which were a direct result of complications with coronavirus. It’s not clear what ethnic background these women were from.

Of all the 233 BAME pregnant women in hospital for coronavirus 41 (10 per cent) needed respiratory support in a critical care unit.

Most of the women in the study, which was based on data from the UK Obstetric Surveillance System, were in the late second or third trimester of their pregnancy.

NHS and care workers from BAME backgrounds have been treated like ‘cannon fodder’ during the Covid-19 pandemic, ministers have been told.

Labour’s Rushanara Ali said the Government has been ‘inadequate in protecting’ those from Black, Asian, and minority ethnic backgrounds as MPs debated calls by members of the public to reward health and care workers on the front line.

She said: ‘We know that BAME NHS workers and care workers have had the highest death rate and yet the Government has been inadequate in protecting them.

‘To be frank, the Government has treated them like cannon fodder and the fact that it doesn’t have proper recommendations is scandalous and they need to get a grip before more lives are lost. 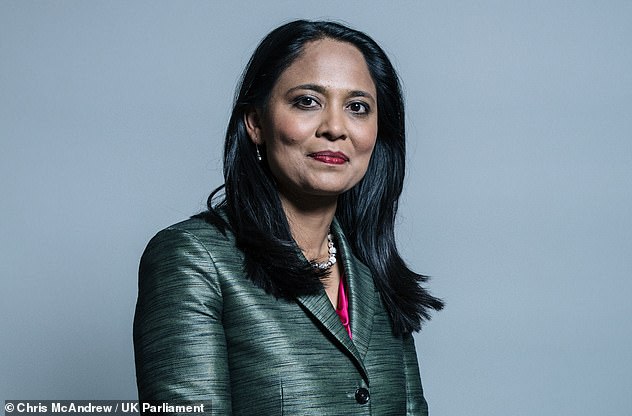 Labour’s Rushanara Ali (pictured) said the Government has been ‘inadequate in protecting’ those from Black, Asian, and minority ethnic backgrounds amid the Covid-19 pandemic

‘If the minister thinks health workers and care workers should be protected she should act instead of saying appalling things about them, and I hope she’ll apologise for the remarks she made recently about care staff.’

Ms Ali also demanded an apology from care minister Helen Whately after it was reported she said student nurses in training are ‘supernumerary and are not deemed to be providing a service’.

‘Unison predicts that we’ll need another million extra care workers by 2025, it is vital we learn the lessons now and make sure we have a resilient, well-resourced NHS where people are properly rewarded and recognised, where their skills and expertise are recognised rather than being treated shoddily which is what we’ve seen,’ she said.

‘We also need to make sure that junior doctors are properly rewarded. [The Government’s] behaviour in recent years was appalling and yet these doctors, nurses and carers have been the people on the front line saving people’s lives and protecting us.’

Petitions relating to Covid-19 have received more than 4.6 million signatures, including 290,000 calling on the Government to ‘reward those caring for us and our loved ones at this time of national need’, according to Petitions Committee chairwoman and Labour MP Catherine McKinnell.

Ms McKinnell said NHS workers needed a pay rise, or for student debt to be written off. 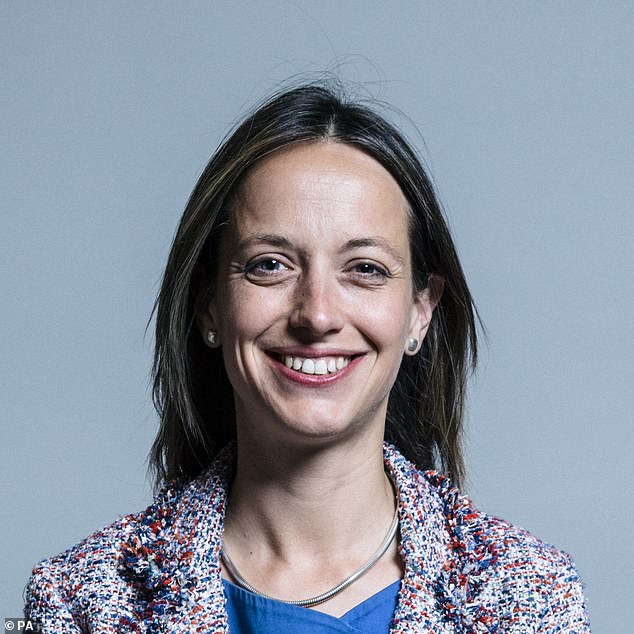 She said: ‘One NHS worker wrote to me to say “I’ve heard whisperings of NHS staff getting medals after the pandemic.

‘”Please don’t let this happen, it’s utterly ridiculous when we’re working in understaffed and under-resourced settings. For money to be spent on medals is outrageous”.’

Meg Hillier, Labour chairwoman of the Commons Public Affairs Select Committee said: ‘Medals don’t put food on the table and there are many people working in our NHS and social care settings who work through agencies and are paid minimum wage or less.’

Conservative MP Tom Randall highlighted one of his constituents suggested a medal for NHS workers, telling the Commons: ‘I understand the Cabinet Office is looking into that measure.’

Tory Alexander Stafford suggested a memorial event should be held in Whitehall to celebrate the heroism of health and social care staff.

Mr Stafford told MPs: ‘I believe this proposal merits serious consideration too and should be taken forward.

‘Ultimately, it is of the uttermost importance that this House pursues all avenues, including looking at pay and rewards, in recognising and rewarding the heroism of our health and social care workers, and the selflessness of those who have helped the NHS both in Rother Valley and across the United Kingdom.

‘Without them, we would not have been able to pull through this crisis.’